Dancing into the Light 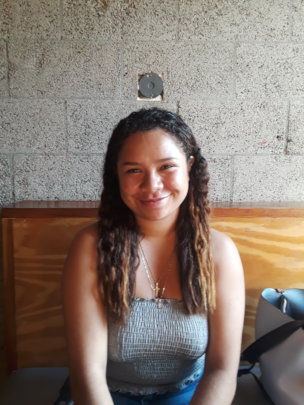 In April of 2018, at a Venice High School POPS meeting, as we talked about the upcoming book launch for the 2018 POPS Anthology, In the Key of Love, Leahnora asked if instead of reading from her poem, "Forgotten," if she could dance. "I'm going to college in Barcelona next year," she said. "A dance college." Of course we told her she was welcome to dance, and I confess I imagined something amateur, but when she took the stage at the Coconut Grove Theater, she astonished all of us with her grace and talent. As she sailed across the stage, I knew I wanted to learn more about who this young woman was and what had brought her to POPS.

And she told me her story. She has been studying dance since she was four years old, and in so many ways she is her mother’s daughter. Mom grew up in Guatemala and attended a prestigious arts high school in Idyllwild, California before going on to attend Bennington and ultimately joining a professional dance company. When we saw Leahnora dance, we all understand why she, at the age of 15, was accepted by the outstanding LA County High School of the Arts (LACHSA); she was one of just 24 accepted from thousands who applied.

But despite her mom’s support, her talent, the joy of dance, there were dark forces at work in Leahnora's life. For 14 years, her dad has been in and out of her life, and his criminal activity colored much of her life's experience. “We knew where we could walk and where we couldn’t from the earliest age,” she says. “Because of gangs.” She describes herself and her friends of childhood as “troublemakers." In fourth grade, she was kicked out of her elementary school for fighting, and at the new school she attended, gang affiliations and race issues became vividly clear, separating kids from old friends. In Middle School, Leahnora was popular with kids and teachers, but she still chased trouble, and at 12 she was arrested for the first time.

Leahnora says that “Everyone was happy for me when I was accepted at LACHSA," but she found herself in  9th grade feeling out of her comfort zones. To get to school she had to wake at 5 every day to carpool. All morning she took classes, and all afternoon she danced, and when she began to see her old friends on social media—together and having fun at the beach, in the mountains, at parties—she longed to return to her neighborhood, and to attend Venice High.

She dropped out of LACHSA and returned to Venice for her sophomore year. At Venice, a couple of old friends introduced her to POPS. “POPS was a saving grace,” she says. Otherwise things weren’t going well. She came to school mostly to attend POPS meetings and wound up that year failing all her classes. She had to attend the Continuation School in her junior year, and she says, "I was living a lie. My friends at LACHSA thought I was being homeschooled; my friends at Venice thought I’d gone back to LACHSA.” She did manage to get straight As at the continuation school. She was inspired to return to Venice--in large measure because she wanted to return to POPS where she found understanding, support, and inspiration.

She was moved by her friends’ experiences with POPS and especially their writings. Leahnora decided to write about her childhood, her dad, her incarcerated friends so that she took could to better understand her life’s experience. “It was hard to write. When I sent in that first poem, it was even harder, but once Mr. Danziger [the club's teacher sponsor] read it, I felt this  huge weight lift off my shoulders. POPS is the reason I went to school. POPS is the reason I graduated.”

Leahnora turned 19 this past September, and now she is in Barcelona, in college, and dancing. Still, she writes to say she misses POPS, and she wants, with all her heart, for POPS to spread. Just last week she wrote from Barcelona with a new poem--a poem, she says, she wrote to help her understand herself even more. This one will be published in the 2019 Anthology, and we all hope Leahnora once again will dance for us! 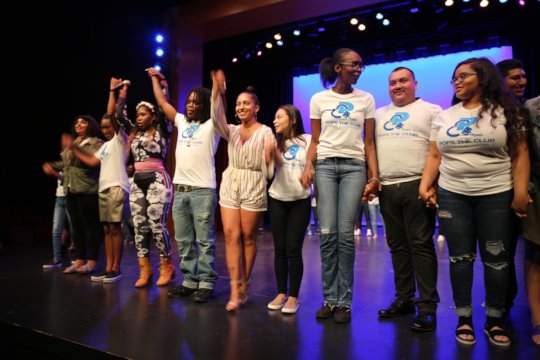 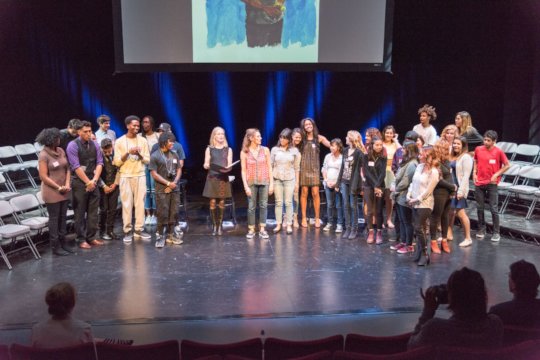 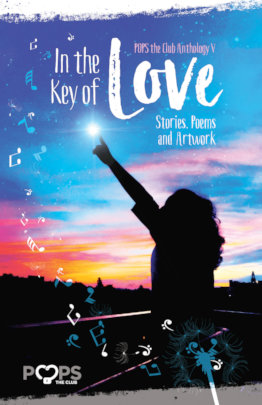 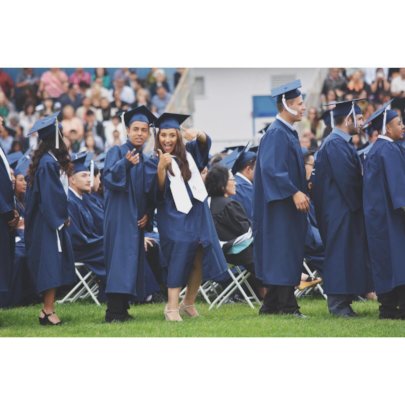 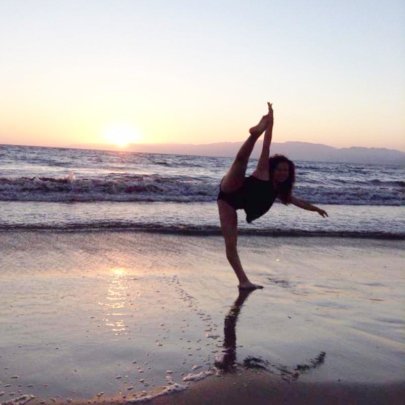 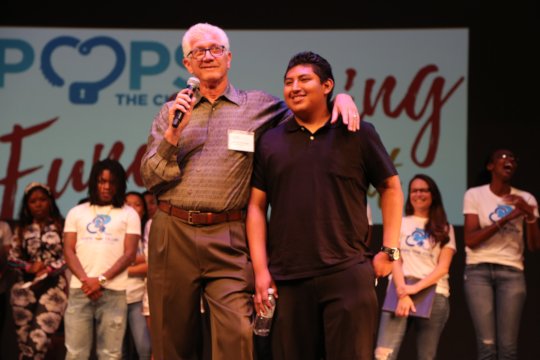 Dennis and Daniel, onstage at the POPS Annual Gala

Dennis Danziger was a public school high school teacher for more than 20 years when he began working as a POPS the Club teacher Sponsor. Since his retirement a little over a year ago, Dennis has been volunteering at POPS Venice High. This year he signed on to participate in POPS new program, "Adopt-a-Student." By donating $100/month, Dennis has "adopted" Daniel Ortiz, connecting him more personally to one of the many students whose well being means so much to him.

Like all POPS students participating in this program, Daniel volunteered to be involved. His agreement is this: Twice each year, just before Christmas break and just before Spring break, Daniel writes a letter to Dennis. In that letter Daniel lets Dennis know know a little bit more not only about his personal life but about the meaning POPS has in his life. Daniel sends these letters through the POPS office. Naturally Dennis is invited to write back to Daniel, again through the POPS central office. Through these personal communications, Dennis is gaining a deeper understanding of what POPS means in one young man's life, and a lot more about just what that life is like. And as for Daniel, he's enjoying an opportunity to connect more closely with one of the adults he has met through his connection to POPS. With each letter, their devotion to each other and joy in their friendship grows.

Once upon a time Daniel had no idea that anyone outside his immediate family actually wondered about his thoughts, his dreams, his ambitions, AND his worries and fears, and Dennis wasn't sure that anything he said or did to help kids really mattered.

Dennis says he's beginning to understand that his connection to this young man is making a difference, and Daniel knows that someone outside his immediate family and circle of friends is there for him. And what has been especially moving for all of us who have watched this friendship evolve is this: Daniel's mom and sister who adore their son and brother have "adopted" Dennis as part of their family, and so the circle grows. 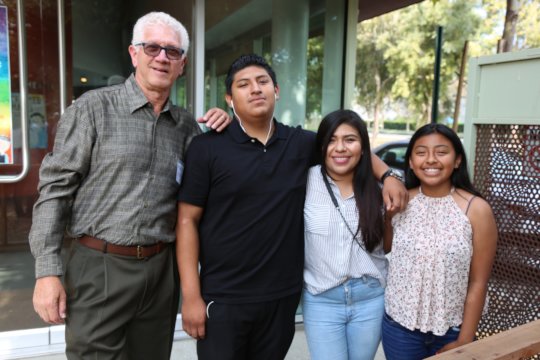 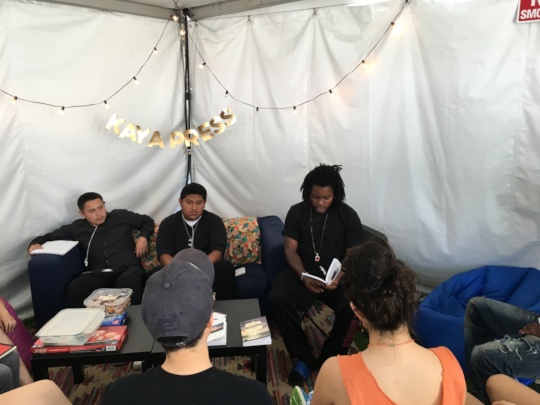 We are in this together... 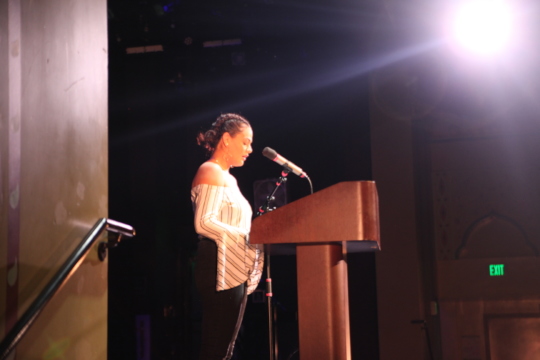 POPS the Club creates community and offers light and love to hundreds of students in classrooms across Los Angeles—and beyond.

Among those who seek nourishment, nurturing and inspiration at POPS the Club are teens with undocumented families--some of whom have twice lost family members, first to detention, then to deportation.

During her senior year in high school, Valeria De La Torre first began to attend POPS meetings at Venice High School. Valeria is a Dreamer, and she came to POPS, she said, because her classmates had opened up about their own experiences with incarceration. Their openness inspired her. She loved the way the room felt so safe. From day one, she felt a community coming together as she describes it, “with love and support and understanding.”

POPS helped me become comfortable and able to speak about my struggles,” Valeria says. “I would like people to know that POPS is an awesome organization that helps young people grow—whether it’s through writing or drawing or just listening. POPS helps young people feel free to take action in their lives.

Valeria graduated from high school in 2016. Since that time she has been attending college and working and recently completed an internship at Kaiser Permanente as part of her involvement with Year Up. She credits POPS with introducing her to many of the amazing people she has met, including those at Year Up. And she credits POPS with giving her the confidence to share her own story. Since she first wrote and published her poem in the third POPS collection Before there Were Bars, she has shared her work on stages across Los Angeles in her effort to inspire and support others.

One in 15 children in the United States has or has had a parent in prison.

Your gift today will help us to provide light, love and voice to young women like Valeria who wrote this poem.

I Come from a Place I Once Didn’t Know

I come from a place I once didn’t know

The place I was born, down south across the border.

One day I asked my mom when we could go visit.

She said, “There’s no way back after.”

I come from 14% of K-12 undocumented students

Who want to pursue the American Dream.

I come from every teardrop

Because the vision of that dream

I come from a country I don’t know

But wish one day to

Go back and meet 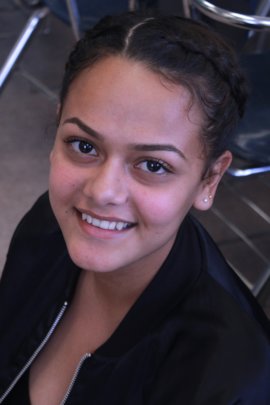