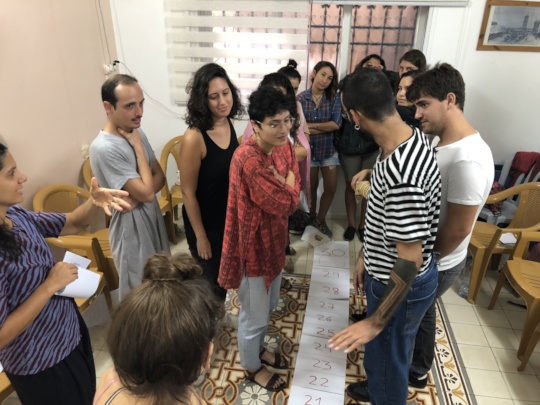 Coordinators and facilitators during a workshop

It is the beginning of another year of bi-national education and activism at Sadaka-Reut. Like every year, new members joined our team of coordinators and facilitators and began to work together in order to empower new groups of youth and young adults to pursue the change they wish to see in their communities and societies.

According to Sadaka-Reut's Theory of Change, the transformation of the individual begins when she or he becomes more aware of their own identity and surroundings. This theory applies not only to our participants, but also to our staff. We know that successful facilitators' training greatly contributes to the success of our different programs.

Therefore, in October, old and new members of our team met together for the first time for two busy days of staff development, where they got to know each other personally and politically while engaging in workshops surrounding the current political climate, media biases, gender, and groups in society. Other workshops were more practical, requiring the team to deal with challenging case studies that they might need to deal with throughout the year, based on the organisation's past experience.

In our Community in Action program, the new Jewish and Palestinian participants started meeting for their weekly learning days in September. The first few meetings focused on introductions: participants were introduced to their coordinators and to each other, but also to Sadaka-Reut, its staff, and the Jaffa surroundings. They received training in preparation for a year of volunteering at schools in Jaffa, including on interactions with young students and specific measures of child protection.

In November, participants embarked on their first self-led tour of Jaffa, with each pair conducting research on one geographical point, its history, and what can be learned from it, and then sharing the lessons they learned with the rest of the group as they passed through each stop. The tour was informative and enriching for everyone involved, and will be followed by a few more. As they began their volunteering at four different schools in Jaffa – and, for the first time, also at the South Tel Aviv Levinsky Garden library, volunteering with migrant youth – participants are already well on their way to becoming involved and active members of their communities.

Thank you all for making it happen! 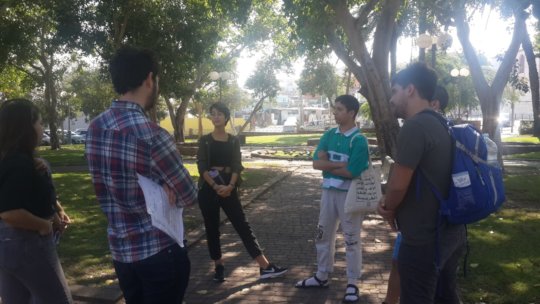 Ending the activity year on a high note 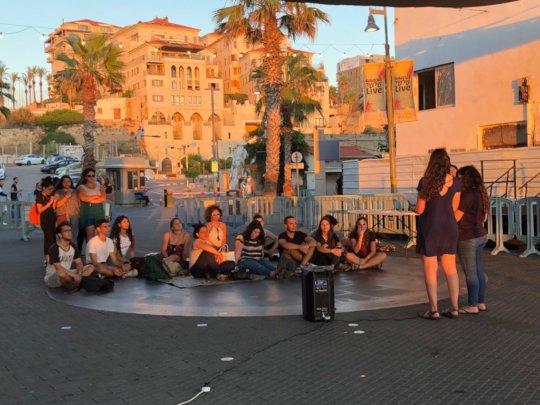 Along with Sadaka-Reut's other programs, Community in Action participants concluded their activity year in June. They chose to celebrate the end of their journey together with a binational, bilingual public Spoken Word event that was held under the theme of social and political struggles. In the event, local artists were invited to present written pieces related to personal or collective experiences of oppression and protest. Topics ranged from different forms of systemic discrimination to civil non-violent protest.

This initiative grew out of the experience of one of the Palestinian group participants, who is also a member of a spoken word poetry group outside the program. Following the recent Gaza protests, she wrote and planned to perform a piece that included a line dealing directly with this subject, but the spoken word group's coordinator refused to allow it and demanded that she remove that line from the piece. When she refused, she was prevented from getting on stage and performing at their event. Once this participant told some of the others in the Sadaka-Reut group about what happened, they came up with the idea of holding this event in solidarity, to highlight this form of art as space to create social and political change.

Throughout the year, our participants volunteered with students at schools in Jaffa. During the last period of the activity year, they also summarized their experiences. The following are some feedbacks we received from the participants:

"I witnessed my students gain self-confidence. Every meeting I would ask them to tell me about their week. They would tell me and I would show an interest and ask questions and it made them feel that someone cared about what they were going through"

"Everything is connected. The critical perspective I have developed throughout the year passed on to my students without me even intending to. My understanding of power dynamics and my place as a Jewish volunteer in an Arab school comes from our learning days and influences the way I tutor and treat the students"

We wish our recent program graduates the best for the future, and thank you all again for supporting this program and our the Sadaka-Reut vision! 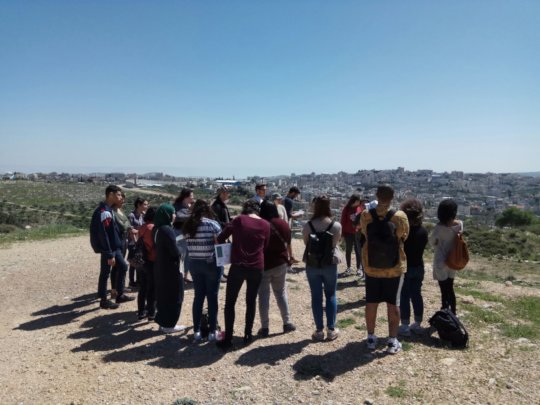 As they began the final half of the program year, participants saw growing tensions both inside and around Israel. Both participants and facilitators have had to confront their own fears and biases and challenge their perspectives in order to have productive programming and conversation and be able to relate to one other.

In Gaza, the weekly Return Marches were faced with violent reactions from the Israeli army, resulting in high casualties. They were scheduled to take place from Land Day to Nakba Day, overlapping with Passover and the Jewish national holidays (Yom HaShoah, Yom HaZikaron and Yom HaAtzmaut). The Palestinian participants were greatly affected by the violence and deaths in Gaza, while some Jewish participants found it challenging to have conversations on this issue during holiday celebrations. These external pressures, felt in some capacity by all participants and facilitators, made productive dialogue amongst the groups harder to achieve. Thus, facilitators and participants had to be more mindful of creating an open space for everyone to voice fears and observations of the events.

In March, Jewish and Palestinian participants of the Community in Action project took part in a seminar that explored the complexities of Palestinians' lives in Jerusalem/Al-Quds. Participants learned about the unjust division of resources between the Western and Eastern parts of the city, as well as the human rights violations caused by the separation wall and occupation. Jewish participants met with Joint Arab List Congressman Dov Khenin and local peace activist Hamutal Blanc, while the Palestinian participants went on a tour in the ancient city to learn about the history of Palestinian culture and current local initiatives. This was the first time this cohort of participants had gained deep, close-up knowledge of Jerusalem, and both groups felt inspired to take action on the issues addressed.

Earlier this month, Participants of the bi-national group took a historical tour called “From Jaffa to Beirut” with Zochrot, an NGO that focuses on commemoration of the 1948 displacement of Palestinians from their homes. Participants began the tour in Jaffa and learned about the erasure of Palestinian identity from spaces where oppression has taken place. Participants went onward to the village of Iqrit in the Northern Galilee. Once a Christian village, after 1948, the village became occupied by the Israeli military. Now, Iqrit is dealing with constant demolitions and rebuilding. Participants met local Iqrit activists who maintain a small, yet strong, Palestinian community there. The last stop on the tour was Rosh Hanikra, on the border of Lebanon, at which the conversation shifted to the potential return of Palestinian refugees. Despite the tense atmosphere in the air these days, the bi-national group handled this sensitive dialogue with maturity, openness and empathy, resulting in their ability to acknowledge some of difficult events of the past while still holding on to different visions for the future. We expect that the participants will continue to grapple with the new information and process how to incorporate it into their existing narratives, both individually and as a group.

We thank you, as always, for your continuous support in this process. Even as we go through difficult times in our region, it's good to know that we have partners like you walking with us!