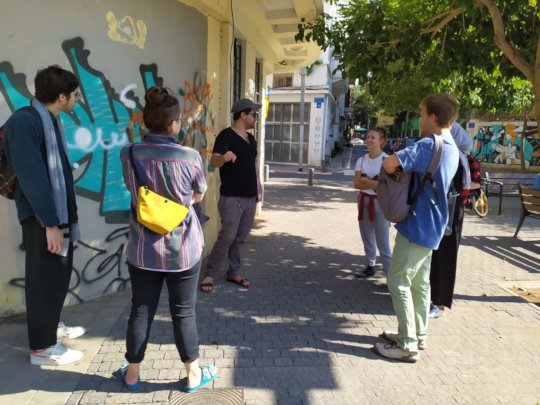 After an eventful summer, we were excited to open another year with more groups in each one of our main projects!

We began this project year in Community in Action with two new groups.

According to the new project format, one group follows our traditional model, which brings together local Palestinian and Jewish high school graduates to engage in bi-national learning, local volunteering, and social action; whereas a second group is run in cooperation with AJEEC and brings to Jaffa Jewish participants from the Jewish Scouts to learn and volunteer at local schools alongside Palestinian Jaffa residents.

The new groups include a total of 20 participants; of them, twelve Jewish and eight Palestinian participants, fifteen females and five males. The first group meetings took place in September, including uni-national workshops as well as bi-national discussions and activities. In the very beginning of the group process, emphasis is put on the uni-national work, with the purpose of building up the participant's confidence and comfort within their own identity. At this point, the Community in Action group is already preparing their first tour of the year – a participants-led tour of Jaffa.

Meanwhile, Sadaka-Reut staff started their own staff development process. Two days in October were dedicated to personal, political and professional introductions between new and old coordinators and facilitators from the different projects, and activities that encouraged staff members to reflect and situate themselves within group dynamics. Since our student project is expanding and now includes its own team of facilitators, our first staff development days were attended by no less than 22 people! We can't wait to see where eles this year will take our new participants and staff. 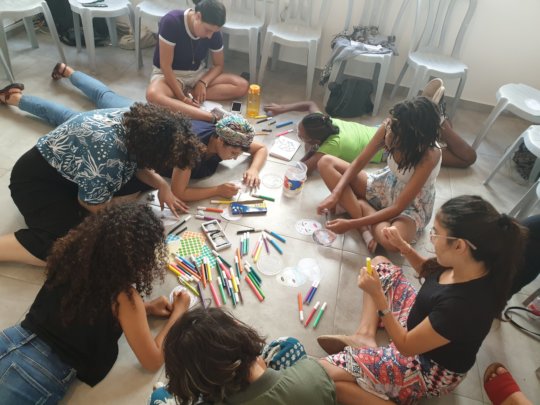 Concluding another year of Community in Action 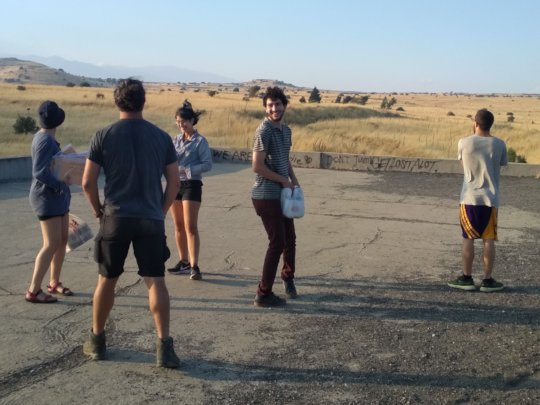 Overlooking Syria in the Golan Heights

Another year of bi-national activities in Jaffa and beyond has come to an end!

For their final initiative, Community in Action participants took on the issue of asylum seekers and labour migrants, which has made headlines in recent years, dividing entire neighbourhoods and communities between those who are for and against such migration. Yet, it is rarely talked about within local Arab communities. The participants learned about the situation through the educational program and created a series of posters and stickers in Hebrew, Arabic, English, and Tigrinya. Their initiative sought to call attention the key terms "genocide" – especially relevant to refugees from Sudan – and "infiltrator" – a charged term recently used by the government to refer to asylum-seekers and labour migrants, and which was historically used to refer to Palestinians refugees who tried to return to their homes.

The group marked the end of the year with an educational trip to the Golan Heights, where they learned from a local Druze guide about the history and current realities of the region's residents. The day started with a beautiful hike along the Hatzbani River. From there, the group drove to the village of Majar, half of which is under Lebanese control. After passing through the market in Majdal Shams, the group had lunch at the home of a local family. Just before sunset, participants visited the Shouting Hill, a symbolic spot reflecting the connection that the Druze people in the Golan hold with their families in Syria, whom they rarely get an opportunity to meet. The conclusion of the tour and the year took place in an abandoned Syrian army base, where each participant received a certificate. and had a chance to reflect on the experience:

"In the beginning of the year, I felt embarrassed to tell my friends that what I do at Sadaka-Reut is about Arab-Jewish partnership. Today, I say it, emphasize it, and explain with pride all about it and what it stands for" (Palestinian female, Jaffa)

"The program made me realize how important it is to work together. The ideas of partnership, co-existence, and peace are often romanticized. The world has some ugliness in it and I see a part of my job to make life in it more pleasant" (Jewish male, Jaffa)

We are proud of our participants and their ability to overcome challenges in order learn and act together throughout they year. Meanwhile, recruitment for next year's program is underway, and we are already excited to meet the next group of Community in Action activists!

"Every place you see has its own quiet struggle" 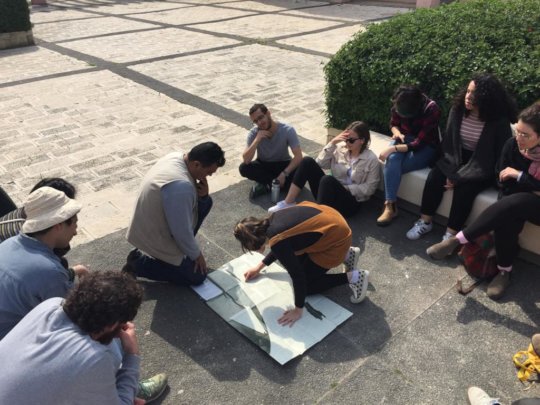 Looking at a map of Palestinian towns before 1948

As the year progresses, Community in Action participants began to delve more deeply into issues relating to the conflict.

In early April, the two groups went on the tour "From Jaffa to Beirut", guided by Zochrot. The tour started in Jaffa, in what used to be the Manshiyeh neighborhood that was destroyed in 1948, continued in Nesher, which was built on the ruins of the village of Balad al-Sheikh, and ended in Iqrit, formerly a Christian Palestinian village that was destroyed and occupied by the Israeli military and where Palestinian activists are now working towards return. In Nesher, participants were asked by locals what they were doing there, and when they responded that they came to learn about what happened in 1948, locals seemed confused and said that "there was nothing here". At the end of the tour, the guide asked the group us to imagine a different, less segregated future, in which the kind of life that existed and was ruined could be re-established on this land.

And the active learning continued. In their second and last seminar, the Community in Action group made its way to Jerusalem. Adam, a group participant, wrote the following reflection:

The journey in Jerusalem began with mixed feelings. Every step you take has some meaning; every place you see and pass through has its own quiet struggle.

We spent the first day, which was a Friday, in the Muslim Quarter. As we passed through the crowded area near Al-Aqsa Mosque, and saw policemen standing there in every corner, the same question kept creeping into my mind: Why? Maybe I'm naive, or maybe there really is no good reason. From there we moved on to observe the settlements and synagogues in the neighborhood. We realized the extent to which the Muslim Quarter is under the constant threat of the occupation. We saw a march of Orthodox Christians in celebration of Easter. Maybe not everything that happens in the Muslim Quarter has a political significance.

We continued on to the Western Wall, but not before we went through a security check.Six minutes later we saw the entrance. It was the first time I stepped a foot there. There was no special revelation there, except maybe I expected it to be bigger. From there we went to the City of David. Before you enter the pretty area, you are greeted with dilapidated building, and the whole compound is run by a settlers' organization. Some people find it beautiful. This is where we concluded the tour.

From there we went to Sheikh Jarrah, where residents are under threat of deportation. We talked to one of the people whose house was in the midst of legal proceedings towards evacuation, and then accompanied him to a demonstration against the evacuation. We marched and shouted in Hebrew, Arabic and English.

On the second day, we started in the center of Jerusalem. We went to Independence Park and spoke with two activists: a Palestinian and a Jew. They both talked about the role of the activist with all its complexities. After a fascinating conversation we continued on our way into the Armenian Quarter. The Armenian people are very interesting and have a unique history. We learned about a part of Jerusalem that we knew nothing about, and it was "refreshing" to listen to other problems in this city than the occupation.

This long journey undoubtedly inspired us with ideas and questions. In the end, we did return to Tel Aviv, but make no mistake – our struggle has just begun, and our journey still continues.

We hope that you, too, like the Community in Action participants, feel inspired to keep taking steps in new directions, and learning about the struggles held in different places! 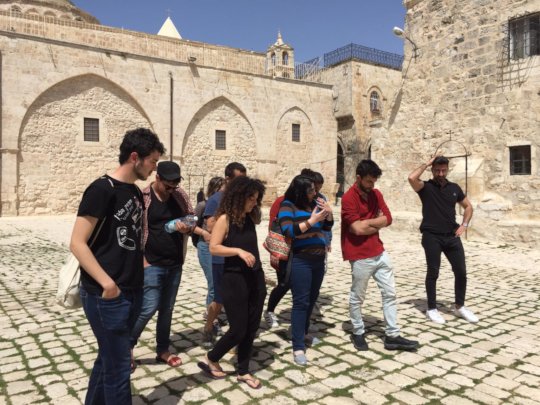 Exploring the Armenian Quarter in Jerusalem 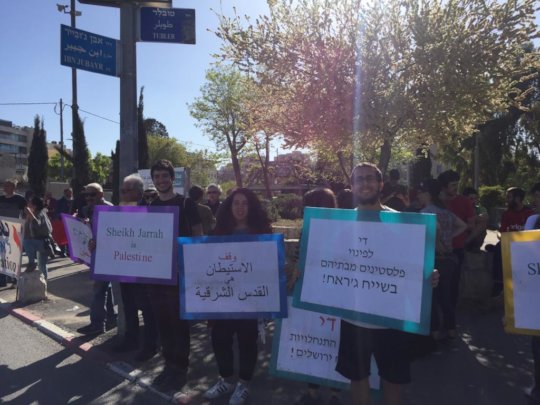 The group protesting in Sheikh Jarrah
‹ 1 2 3 4 5 ›
WARNING: Javascript is currently disabled or is not available in your browser. GlobalGiving makes extensive use of Javascript and will not function properly with Javascript disabled. Please enable Javascript and refresh this page.