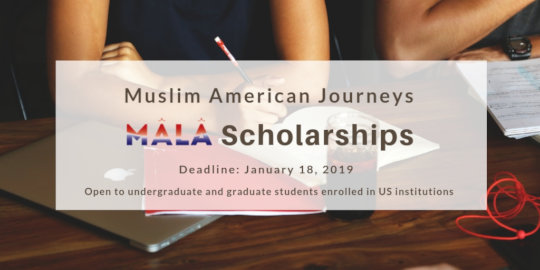 In September 2018, MALA launched its “Muslim American Journeys” Scholarship competition for the second year in a row!

This competition is open to young storytellers who are seeking higher education as a means to build stronger communities, cultivate diverse perspectives, and enact positive change. This scholarship aims to empower rising leaders to pursue these objectives, while continuing to shape the diverse fabric of American society. And even as academic choices expand, higher education remains the preeminent tool for empowering new generations of leaders and changemakers.

As part of its scholarship competition, MALA also launched the Fawaz Kannout Memorial Scholarship Fund, which will honor the life and legacy of Dr. Fawaz, who passed away earlier this year after a courageous battle with cancer. This fund will ensure the continuation of Dr. Fawaz’s legacy by providing opportunities for young leaders to engage with the arts and with cultural initiatives.

MALA is accepting applications from US residents with a story to share! Storytellers must be at least 18 years old and enrolled in (or planning to attend in the next year) a college or university in the United States. Undergraduates at two-year and four-year institutions, and graduate students, are all welcome.

MALA will award a $1,000 grand prize, a $500 second prize, and five third-place prizes of $300 each. And MALA will share as many of these personal journeys as possible in its digital “Muslim American Journeys” story collection, so it is a great opportunity for storytellers to be published.

To apply, applicants submit a short essay (600-1000 words), accompanied by a headshot, describing their individual journey under one of the following themes:

Essays will be judged on: 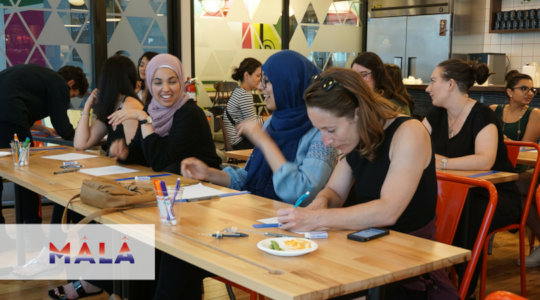 In July 2018, MALA launched an ongoing series of seminars and other events centered around Islamic art to continue our exploration of the Muslim American journey.

MALA’s inaugural event, conceptualized and led by MALA community members, was held in Chicago in July, and focused on tessellation art – the instantly recognizable swirl of geometry that is so common across north Africa and the Middle East.

The afternoon started with a conversation about the diverse origins of Islamic tessellation art – including the Greeks, Romans, and Sasanians in Iran – and the role of Islamic mathematicians, astronomers, and scientists in driving the style to its perfection. The mathematical elegance of these designs is that no matter how elaborate, they are always based on grids, and even amateur artists can build a remarkable visual spread using only a compass and ruler.

After this discussion, attendees – each of whom received a compass and ruler – got to work on their own masterpieces! Led by Gabriel and Aqsa, this wait-listed seminar was geared towards both those interested in the cultural and artistic dimensions of Islam as well as anyone interested in art more generally.

Meanwhile, in New York City in August, MALA partnered with the American Sephardi Federation to host “Maktuv,” an evening of inter-cultural art. As cognates, 'Maktoob' and 'K’tuv' mean “written” in Arabic and Hebrew, and the class used calligraphy to explore the significance of Arabic in Islam and Hebrew in Judaism, as well as the close relationship between both Semitic languages.

This hands-on workshop, which was also waitlisted, was a welcoming space for attendees to share their personal connections with the holy languages of two faiths and to engage with these two languages through the beauty of calligraphy.

This seminar was led by Ruben. Originally from Uzbekistan, Ruben comes from the native Persian-speaking Jewish population of Central Asia. This community — the Bukharian Jews — has lived alongside their Muslim neighbors for 1,300 years, engaging in cultural and intellectual commerce.

MALA is excited to host more of these hands-on, arts-centric events in the coming year, including a special tessellation seminar for architects in Chicago in October, and an exhibit of rising young Muslim American photographers. MALA is also collecting artist stories to share alongside these events.

See the full photo gallery from our New York art event on Flickr. 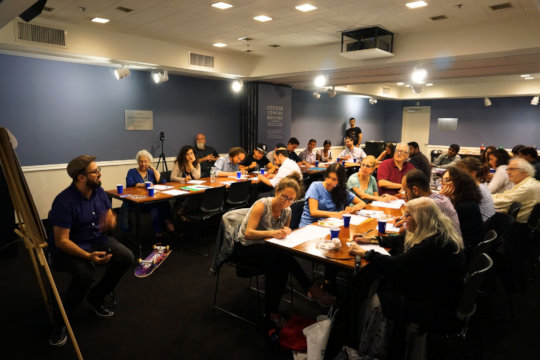 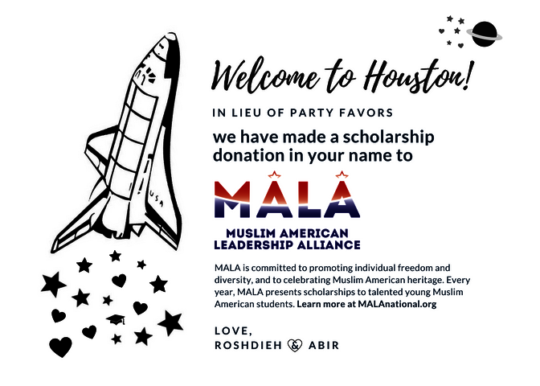 Congratulations to Roshdieh and Abir on their beautiful wedding! Roshdieh has been a MALA supporter since its inception and MALA was honored to be included in her big day. Thank you, Roshdieh and Abir, for highlighting MALA's scholarship program for your wedding guests, and donating yourselves "in lieu of party favors"!

To help nurture a new generation of leaders, MALA launched the "Muslim American Journeys Scholarship Competition." MALA strives to make higher education a priority, enabling emerging leaders to pursue their dreams for a better world. The competition aims to empower scholarship recipients to contribute to the diverse fabric of American society.

By awarding scholarships (ranging from $250 to $1,000) this program reflects MALA’s commitment to higher education, and demonstrates our faith in a new generation of leadership. Thank you for your warm support and participation - you make this possible!

To learn about last year's scholarship recipients, visit our website:

The 2018-19 edition of our scholarship competition will open at the end of August -- stay tuned!