In 2019, the Muslim American Journeys project has continued to grow and expand, representing the vibrancy and diversity of Muslim journeys in the United States. Since thebeginning of the year our story collection has grown significantly, with nearly thirty new stories; among these new storytellers are Laleh Bakhtiar, the first woman to publish an English translation of the Qur’an, along with many other unique and fascinating individuals. MALA’s story archive also includes recently-added stories from the inaugural cohort of the Young Leaders Fellowship. These are stories of dynamic and ambitious young leaders in Muslim American communities; the perspectives and thoughtfulness in their stories reflect the values that MALA is founded on.

Part of what contributes to the success and growth of the Muslim American Journeys project is MALA’s ambition to explore and engage with new communities. This year, MALA is seeking to build roots in the New Orleans community; On February 18th, MALA Hosted a discussion and book signing with historian Dr. Ibrahima Seck in honor of Black History Month. Dr. Seck is the director of research at the Whitney Plantation, and author of the new book, Bouki Fait Gombo. It was an honor to work with Dr. Seck for this event, and we were pleased to host a diverse, inquisitive, and energetic audience. In anticipation of this event MALA received a letter of recognition from the office of LaToya Cantrell, the Mayor of New Orleans praising the organization’s work and welcoming MALA to the community. We are humbled by this recognition, and excited to continue to create networks of creative expression in the New Orleans area.

Currently, we are continuing the important work of expanding the Muslim American Journeysproject to share our platform with new communities and individuals across the country. In order to do this, it is crucial that MALA has the resources to source, collect, process, and publish the stories of Muslims in America. Your contributions help us to reach new communities, offer better resources, and continue to bring creative and accessible programming to American Muslims nationwide.

The MALA Scholarship Program offers scholarship awards to young community leaders who demonstrate integrity, ambition, and creativity through the art of storytelling.  The scholarship is open to individuals of all identities and backgrounds, and aims to help an emerging generation of leaders pursue higher education. During this application cycle, we have received nearly twice as many applications as the previous year, and thanks to the generosity of our donor community we are thrilled to announce that we will be able to offer even more scholarship awards this year.

Currently, our review board is hard at work evaluating applications in order to determine this years scholarship recipients.  We hope to announce this year’s winners by March 30th, 2019.  While this year’s application cycle has ended, the work of ensuring that we can continue to assist exceptional young leaders pursue higher education continues: our hope is to continue building momentum, and to be able to offer even more scholarship awards in the next application cycle.

Your donation helps MALA continue to cultivate these key opportunities for ambitious and committed young leaders.  By giving these driven individuals the tools and resources they need to learn and lead, we can inspire growth and openness in our communities and empower a new generation of leadership. 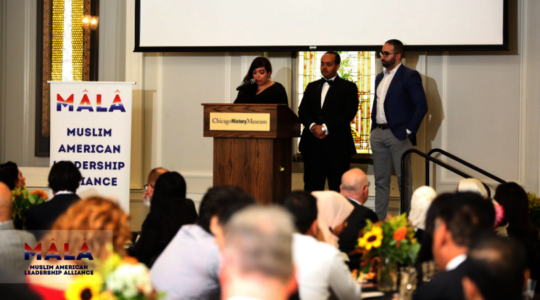 On November 6, 2018, MALA recognized a number of "Muslim American Journeys" storytellers at its Third Annual Gala.

Narimon, a Chicago based Iranian-American entrepreneur who is also a contributor and analyst for the radio program Worldview on WBEZ (Chicago Public Media), received MALA’s first annual Community Builder Award for Cultural Leadership. This Award recognizes his outstanding work in bridging the worlds of entrepreneurship, the arts, and current affairs, and, “in doing so, building a community of talent and passion.” Listen to Narimon’s StoryCorps interview, “To Chicago, from Tehran,” here.

Isra, a young Somali-American who has played a dynamic role in MALA’s growth, received MALA’s Emerging Leader Award for her outstanding contribution to the Muslim community in Chicago and her commitment to volunteer service. Listen to Isra’s StoryCorps interview, “Reconnecting with My Faith,” here.

Chicago powerhouse and long-time MALA friend Logan received the MALA Community Builders Award for Philanthropy for his “commitment to inclusion, creativity, and human connection as solutions to society’s modern challenges.” Michael of the Chicagoland Chamber of Commerce, and cofounder of the Chicago Leadership Alliance, received MALA’s first annual Community Builder Award for Leadership. This was recognition for Michael’s outstanding work in building and mentoring leaders across Chicago: “in the process of fostering positive, values-driven, pluralistic leadership, you have built bridges that have allowed for the respectful exchange of ideas.” He also led a session for MALA’s Young Leaders at their retreat, held the day before the gala. Read Michael’s StoryCorps interview, “Global Connectivity Begins At Home” here.

Finally, MALA’s first annual MALA Human Rights Storytellers Award went to Mariya, a long-time gender violence activist. Taher has facilitated a powerful series of videos that allow survivors of Female Gential Cutting (FGC) to share their stories on their own terms. MALA looks forward to hosting screenings of these stories in 2019 through our "Muslim American Journeys" project.

Chicago Mayor Rahm Emanuel sent a congratulatory letter to MALA on the occasion of this Gala. He wrote: “MALA has emerged as one of our most innovative civic and community organizations whose involved programming focuses on meeting the needs and sharing the narratives of Muslin Americans.” Read the Mayor’s full letter here.