Coaches Across Continents and Pathfinder International announce a unique partnership that uses Purposeful Play and Education Outside the Classroom to advance sexual and reproductive health and rights. The first project has begun in Tanzania and includes the development of a Purposeful Play Curriculum that addresses four main components: Knowledge of sexual and reproductive rights; Household environment; Community responsibility; and Conservation; as well as an Educational Hub for 20 key leaders to be held in Zanzibar, and local programs in selected Tanzanian communities.

Pathfinder is a global leader in the advancement of sexual and reproductive health and rights, and Coaches Across Continents is the 2018 Winner of the Beyond Sport Global Impact Award. The combined expertise of these two organizations will allow the program to provide resources and education specifically tailored towards teenage girls, boys, and young families. The Trotula Fund is a proud supporter of this collaboration and the first project in Tanzania.

“We are excited to be supporting the partnership of Coaches Across Continents and Pathfinder International, two organizations that have a long and rich history in working with adolescents and young people in Tanzania. Being able to couple sport, athletics, and sexual and reproductive health care to promote young people’s ability to choose their own future is a great opportunity. We view this as the first step of many in this partnership.”

“The Coaches Across Continents collaboration with Pathfinder International is a groundbreaking partnership that will advance the lives of children, women and entire communities in Tanzania. The innovative and effective methods of CAC coupled with Pathfinder International’s technical ability to enhance sexual and reproductive rights is an inspiring union. The collaboration exemplifies their authentic commitment to progressing human rights globally. I am honored to support this partnership in fighting what is with what ought to be.”

“This is an exciting moment for Coaches Across Continents. Working with Pathfinder on this new project will enrich communities throughout Tanzania and around the world in ways we’ve yet to see through other partnerships. The collective impact of our resources and experience in the fields of education, global health, sport and gender equity will see unique strategies in play to advance several UN Sustainable Development Goals such as 3: Health and Wellbeing, 4: Quality Education and 5: Gender Equality. We are thrilled to be at the center of this transformative program.”

During my first week, we worked with the Naz Foundation, a great organization that seeks to empower young women through the power of play and opportunity to learn in partnership with CAC’s Education Outside the Classroom curriculum. Our primary focus was to work with the netball coaches who teach life skills to young girls at local government schools. Naz’s netball curriculum seeks to fulfill their four main goals: to Be Yourself, Be Empower, to Be Money Savvy, and to Be Healhty.

Because Naz has been working with CAC over the past several years, the coaches were very familiar with the standard CAC games that bring about social change. Perhaps more importantly, it was clear that the coaches truly wanted to engage, teach and empower their players in a meaningful way. Therefore, our week with the coaches was focused on helping them develop the necessary skills to do this, without necessarily following a step-by-step guide in a written curriculum.

After evaluating several coaches at local schools and understanding the challenges these coaches often face, we focused on two main areas. First, we wanted to help Naz expand the number of games in their curriculum, while showing them how each game can have several progressions and can be used to teach numerous social messages. Next, we challenged the coaches to problem solve, to use critical thinking, and to ask players important questions to initiate meaningful conversation about important issues.

Ultimately, the goal was to focus on the development of the ‘master trainers’, trainers, and community sports coaches to enhance the impact of the program on all of the young girls. I was very impressed by all of the coaches, as they were incredibly energetic, confident and empowered young women (as well as a few men!). It was cool to see them grow more confident in their roles as the week went on.

Apart from our on-field work with the Naz Foundation, we went to a football training session with young boys and girls run by an organization called Foot and Boot. Despite the sandy field, the kids had so much fun and it’s amazing to see how much they truly love playing. Another evening, we played pick-up soccer with some coaches from The Football Link, the organization we will be working with in Udaipur later this month.

In terms of Delhi itself, there are over 20 million people in the city, so the traffic and noise is unlike anything I’ve ever seen. Our taxi driver told us your need three things to be able to survive in Delhi: a good horn, good brakes, and good luck!

We also squeezed in a bit of sight seeing – we walked by the India gate, the President’s House, and through the crowded, windy streets Old Delhi. Yesterday, we took a day trip to the city of Agra where we visited the Taj Mahal, the Agra Fort, and the Tomb of Itimad ud Daulah; all three sites were even more beautiful than expected. The food here has also been great, although my mouth is usually on fire by the end of the meal!

Looking forward to heading to Nagpur to work with Slum Soccer – thanks for following along!

ASK for Choice with Global Impact of the Year 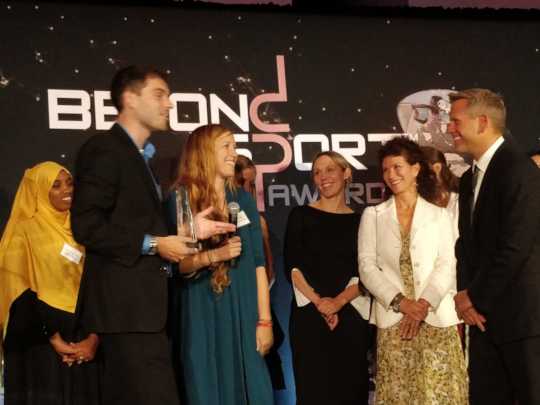 Beyond Sport Global Impact of the Year Award

Here is a recent blog from a volunteer with CAC who worked with some incredible women in sport for development in Jordan!

September 19th, 2018. Global Citizen Jesse DiLuzio writes about his first country on-field with Coaches Across Continents, noting the incredible women who #ASKforChoice with CAC curriculum, and in celebration of the Beyond Sport Global Impact of the Year Award win! Jesse was on-field with Community Partner Reclaim Childhood in Jordan.

My work with CAC began in Amman, Jordan where I was fortunate enough to work with coaches from a diverse group of countries that included Jordan, Somalia, Palestine, Lebanon and Syria! As part of this process, CAC partnered with a local non-profit called Reclaim Childhood, an organization that works to empower refugee and at-risk women and girls in Jordan through sport and play. This partnership proved to be a fruitful one, and myself, Markus (full-time CAC Coach), and Rose (Community Impact Coach from Lebanon) were very fortunate to work with an incredible group of motivated coaches.

Over the course of the week, we discussed a number of issues with a focus on rights for refugees and women in society. During these discussions, it became increasingly clear that many of the coaches in front of us were already great leaders in their communities. Haneen Khateeb, a female coach from Amman is one of these examples. Just last year, Haneen broke a world record through her participation in the highest-elevation soccer match ever played. At the summit of Mount Kilimanjaro, Haneen along with 29 other players representing 22 different countries played the 90 minute match 5,985 meters above sea level. As extraordinary as this feat was both physically and mentally, it is even more incredible when you consider the social impact of her actions. While the women’s football scene in Jordan has been much improved under the leadership of HRH Prince Ali, the role of women in sports has been a controversial topic across the region, where in some places, women are banned from participating in sports altogether. Haneen’s efforts served as an inspiration for thousands of women looking to overcome their obstacles and pursue their dreams.

Other coaches that we trained also told us about the amazing efforts that they have put forth in order to provide a positive environment for other underserved groups. Muhammad (Yasin) and Paul, two friends from Amman, have effectively created a space in their homes for over one hundred refugees to discuss, challenge, and collectively overcome the many obstacles they face coming from corrupt, war-torn states such as Syria. Not to mention the incredible women who work with Reclaim Childhood throughout the year constantly recruiting underprivileged girls across Jordan to learn and play soccer in a space free from social pressure.

While I entered the week eager and enthusiastic to provide and teach all of the things I have learned in 18 years as a soccer player/coach, I found myself doing quite the opposite. There’s a saying in Jordan that “whenever you are full, you can still eat forty more tidbits of food”. While I was always too full to test its validity during meals, I think this spirit was certainly embodied by the coaches that we worked with this week. Despite the fact that all of them had already accomplished incredible things in their communities, none of them were full. They always wanted to learn more, and their enthusiasm was unwavering. I became the listener, the learner, the “trainee”, as the coaches took the games/discussions that we led and took them to new heights. It was a humbling experience, one that put a lot of my previous assumptions about coaching into doubt.

Off the field, the experience was quite wonderful as well! The locals in Amman are very hospitable and have warm hearts. They will feed you till you can’t move, talk to you until days end, and are always down for a coffee or two. Must haves for me are Shawarma from Saj’s, Falafel from Chammad’s?, Frike, Labaneh, and Mansaf from anywhere. Petra beer is pretty good as well.

It was truly an amazing first week with Coaches Across Continents and I look forward to more travels with the organization!