Nafisha's Success. Get 40% more for your donation on Weds. 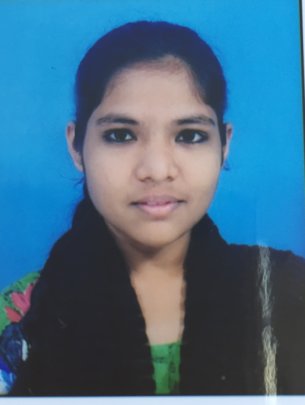 Just over a year ago I reported this about Nafisha...

Nafisha is 15 years old and studying in class IX at an Urdu medium school. She lives with her parents and 3 siblings in a rented room 8’ X 10’. Her father takes home just £50 a month of which £10 is paid in rent. She says ”I really want to continue my education to masters level. I want to stand on my own feet”

Today I am delighted to report that Nafisha has passed her crucial Class X board exams and is looking forward to continuing in school and on to university.  This is an extraordinary achievemnt for a girl from a desperately poor slum family.  Nafisha is well on the way to being empowered through financial independence.   As an educated woman she will be able to determine whether, when and whom she marries. She will be able to support her own family and gain the respect of the community.  And it is thanks to you, as well as her own determination, that Nafisha has such a bright future.

This Wednesday 12th July a donation towards a girl like Nafisha is worth 40% extra as it is a GlobalGiving bonus day.  If you set up a monthly recurring donation your first month's donation will be doubled.

Thank you very much

Read how you empowered Aleya 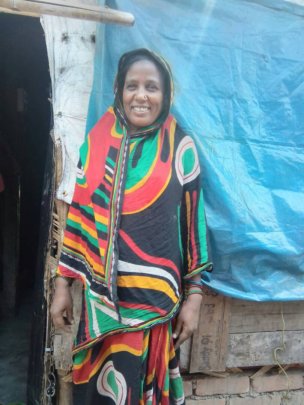 The Alternative Livelihood programme, thanks to your generous donations, is truly changing lives – and not only by helping increase incomes.  As a rag picker (and likely to be female) you are right at the bottom of society.  Even in the squatter camps, where most families engage in rag picking, those who are not rag pickers enjoy a higher status: they get to the front of the queue to collect water.  So by helping a woman like Aleya to switch from the despised occupation to the more dignified fruit or vegetable selling, she gains status in the community. And you’ll see from the story below that this empowered her to approach her children’s school management to demand better school dinners.  And this is exactly what will bring about real change in these communities – the confidence to assert your rights.

Anirban, Tiljala SHED’s Programme Manager, reports on one of the beneficiaries:

“Aleya is an enterprising and vibrant woman. There are eight members in the family consisting of husband, wife, four sons, one daughter and one daughter –in-law. All the members live together in a squatter near Topsia canalside. Her younger daughter studies in class IV and attends coaching regularly in our remedial education centre.

Earlier Aleya was a rag picker, but one opportunity changed her profession. On 17 June 2016 Tiljala SHED granted her Rs.8000 to help her establish an alternative livelihood. She bought vegetables from Sealdah market and sold them in her local Topsia market. Her business started profiting. Now she is earning Rs 400 to Rs 500 per day. Aleya is doing multiple businesses like printing on Flip flop ‘chappals’, she also sells a popular snack “Jhal muri” in the evening. Her older children are also involved in ‘chappal’ printing.

Aleya is a courageous lady. One day she gathered few ladies and went to her daughter’s school where the quality of the statutory mid-day meal was poor. She fought with the School Management Committee and asked the committee to provide the children with a good midday meal. Now Aleya’s financial condition has become stable and she is leading a good life. Aleya has repaid her grant totally. She wants further grants from Tiljala SHED to expand her business.”

About the Livelihood Programme

Since the introduction of waste compactors by the municipality, rag pickers have found their incomes have dropped by half.  In response to this crisis Tiljala SHED raised funds through GlobalGiving and ran a pilot livelihood programme through 2016.  87 small conditional grants were made to destitute families. The loans averaged Rs10,000.  Some beneficiaries received rickshaws or cycle vans and others, like Aleya, set up or invested in informal retail businesses.  The grants are conditional upon repayment into a revolving savings group fund and undertakings by the families to keep their children in education. The beneficiaries in each area have formed CIGs (credit interest groups) which are now responsible for ensuring prompt repayment and also authorising new grants.  The scheme has been very successful with 97% of beneficiaries repaying promptly into the revolving fund.  75% of the beneficiaries have been women and they report not only economic improvements but also reduction in domestic violence.

“I have power and respect now” said Doulari from Park Circus.

94      No of beneficiaries who have increased their income 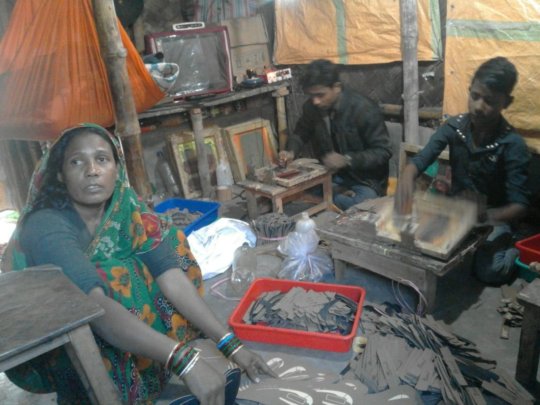 Feeding the Poor in Ramadan 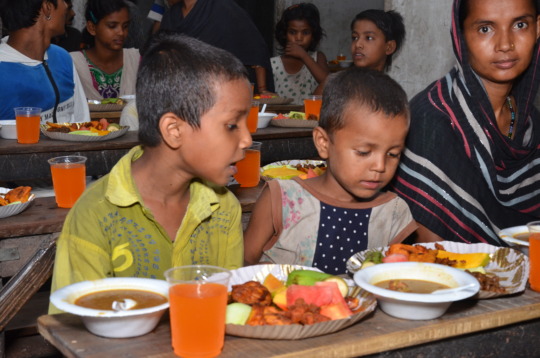 Waiting to tuck in!

It is Ramadan, a time of prayer and fasting.  This year Ramadan falls at the hottest time of year. Between 3.30 am and 6.20 pm no food or drink is taken.  But the people in the Topsia canalside squatter community in Kolkata are accustomed to hunger.  It is what drives them out in the small hours of the morning to collect other people’s rubbish so that they can earn enough each day to feed themselves and their families.  With the recent introduction of waste compactors by the Kolkata Municipality, there is less waste to be found and the prices paid by the dealers have halved. Where they were very poor a year ago, many are now regularly hungry.

We are working hard to help these rag picker families find alternative livelihoods so that they no longer need to depend on the uncertainties of rag picking. (see our project here)  And your generous donations to the weekly feeding programme help us to give a nutritious meal to 450 people every weekend, but I would like to ask you to consider a special donation this month of Ramadan, so that we can provide a celebration Iftar (breakfast) to every one of our neediest target families.

This Iftar breakfast will consist of fruit, savoury snacks, chicken halim, milk drinks, paratha, sweet flattened rice, cucumber, dates and sweets.  We can hire or borrow a hall, hang up decorations and give everyone a party to remember. The cost will be around Rs140 (USD2.20   GBP 1.70) per person.

I am looking forward to reporting back how your generosity has brought smiles to the children’s faces and filled their empty stomachs.

There is one more thing we’d like to do with your very kind donation:  the oldest member of the Topsia community is Sabra. She is a widow of around 80 years old.  She used to walk every day to collect a free lunch from another organisation, but she is now too frail to make the journey.  Her neighbours will sometimes spare her some food from their own meagre supplies, but she often goes hungry.  For this month of Ramadan, at least, we will ensure that has at least two good meals a day.  If enough funds are raised we will continue to ensure she is fed daily. (cost of feeding Sabra Rs2500 (GBP30  or USD39)

Please help us to remind the rag pickers of Topsia that they are not forgotten, by giving them a wonderful Iftar celebration and by ensuring that the most vulnerable resident is cared for. 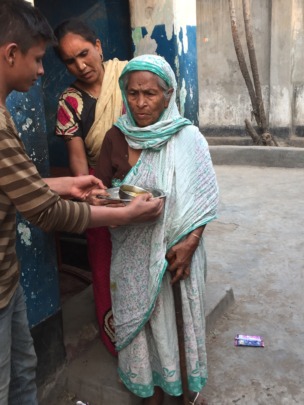 Sabra - now badly in need of food daily
‹ 1 ... 16 17 18 19 20 21 22 23 24 ›
WARNING: Javascript is currently disabled or is not available in your browser. GlobalGiving makes extensive use of Javascript and will not function properly with Javascript disabled. Please enable Javascript and refresh this page.