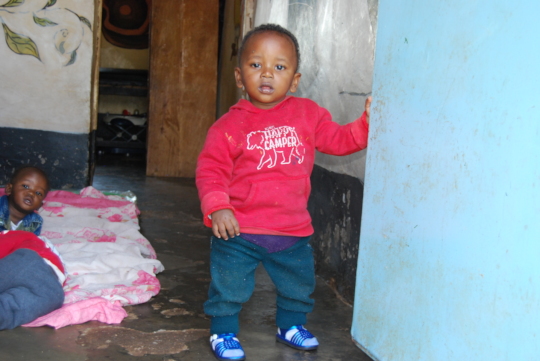 We have been able to provide nourishment and life giving help to children, because you contributed directly to their success! Thank you so much for considering Macheo US in your giving.

From the Field, by Seth Mwangi

The problem of malnutrition in the Kiandutu slums has a lot to do with the fact that the area is so remote and is a shanty town. This combined with poverty, lack of education and an lack of availability of food, contributes to a range of challenges for families and children specifically.

Meet Stephan (not his real name) was a very sharp and active baby boy living with his single mother and three other siblings in the Kiandutu slums. At one year and four months old, Stephan was acutely malnourished, his mother Anita was worried about how low his weight was and had noticed that he lacked the energy to stand on his legs.  Stephan’s weight was fluctuating, his arms too thin andhe was simply too small. He fell sick so often because his body did not have the same ability to fight off infection as a well-nourished child’s body would. What’s more, as is common with children dealing with malnutrition, he had little appetite, which only aggravated his condition and the complications he was experiencing. Generally, children gain weight as they grow, but by that age, Stephan was experiencing a troubling symptom of what would become a much more complex condition; malnutrition.

When Macheo identified Stephan, his family was going through a lot.  Anita carried her poverty into adulthood, doing odd jobs with periods of homelessness and hunger. But more disturbing was that poverty had started to take its toll on her children. Anita lived with worries about how she had to take on the responsibility in the household as the odd jobs earned very little to support the family.

Through Macheo, Stephan was enrolled in our Malnourished Children’s Program that provide children with the necessary nutrition to overcome and prevent health conditions or malnutrition that would otherwise hold them back. Stephan received therapeutic nutritional care he needed, along with monthly food supplement and intensive follow-up to help reinforce a diet that includes nutritionally dense foods supplies. The Macheo service provider immediately gave him the medication and dietary treatment as well as around-the-clock care and the nutrition he needed to grow healthier. After three months in the program, Stephan gradually recorded an improvement in his weight and was able to walk on his own and play around with other children.

Anita celebrated the outcome, saying: “I am proud to see that my son is back on track for normal development and good health.” She also gained a lot through trainings on how to keep Stephan healthy by practicing proper nutrition, breastfeeding, parenting and entrepreneurial skills that she learned from our workshops. Anita also started a small business that has been able to support her family.  Stephan one of the dozens children who are now enjoying healthy childhoods thanks to the care and support provided by Macheo Children’s Home.

It is all because of you, and without your support, Stephan would still be struggling. 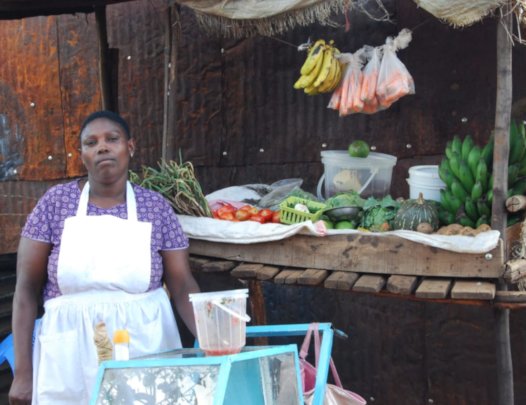 All mothers want to feel that they are providing for their families. This is not easy in the slums of Kenya, where jobs are scarce and lives exist from day to day. However with your financial help, Samantha was given the oppurtunity to participate in the Macheo Economic Empowerment Program to make a new start for herself and effect the lives of her two children.

We are very grateful that you put your trust in is.

Story from the Field by Seth Mwangi

Samantha’s story begins long before she opened up her business and her success story illustrates how household economic strengthening can unlock potential and truly change lives of vulnerable families.

Samantha, 25 years old, is a single mother of two, Ann and Joseph who hails from the poor rural community of Kianjau village in the Kiandutu area.  Samantha saw her family’s life hopelessly crumble several years ago and a lot of bad things happened to get her there. Like many others who are poor, she didn't have just one or two problems, but a whole pile of them. She depended on odd jobs that earned her little money. Samantha’s family was forced to choose between food, clothes and sending Ann to school. This is not a choice anyone should have to make.

When Macheo social worker first identified her, Samantha was going through challenges of hunger and other insecure living conditions. Samantha’s children had dropped out of school and Joseph was malnourished. Her family drew hope and strength from their immediate family and the mercy of the neighbors who found it a burden to support Samantha’s family with the basic necessities. Through Macheo, Joseph got enrolled in the Macheo Malnourished Program and was given  around-the-clock care and the nutrition he needed to grow healthier. After three months, Joseph made steady gains in both overall health and milestone development. In addition, Samantha was empowered economically. Through Macheo, she was supported to start up a business. Samantha was also trained on financial management and records keeping during seminars that she attended at Macheo. The business has enabled he provide for her family and take Ann back to school.

From the start, Samantha has been an active and very bright mother who always stand out due to her tenacity and passion for improving her family’s life. As her business grew, she has been able to gradually improve the life of her family. Her financial stability has allowed her child to return to school and has provided a living environment in which Ann can complete homework. “My dreams for the future are to continually to grow my business and help my kids succeed. I am very happy for the support I have received from Macheo and for the journey they walked with me,” says Samantha. “This opportunity has unlocked my potential and truly changed my life since I am able to sustain my family without strain. The dramatic contrast of Samantha’s life before and after receiving support from Macheo, brings to life the importance of Macheo's work and is a memory that will remain with me forever,” she adds.

As you can see, Samatha's life and that of her children has radically changed because of your support. 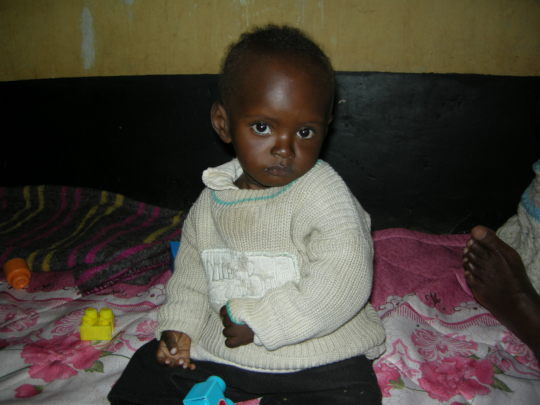 Jecinta after fully recovering from Malnutrition

At ten months old, Jacinta (not Her real name) was severely malnourished and had missed many of Her developmental milestones. Jecinta’ mother, Stacy, who depends on odd jobs, lives alone with her two children in the Kiandutu slums, a small informal settlement in the outskirt of Thika. She used to wash clothes for people to earn a living, but income from the laundry business was not enough to make ends meet. Stacy hoped that her children could afford a better life but her dream seemed to shut as each day could bring a long more challenges.

When Jecinta was identified, he weighed 6.5 kilograms and had not received deworming thus was losing weight. Macheo social worker noticed that he was very weak, low on Her weight and had lacked the energy since he was fed on starch only. Through Macheo, Jecinta was enrolled in the malnourishment program, which provides a nutritional supplement and intensive follow-up to help reinforce a diet that includes nutritionally dense foods. Jecinta was prescribed vitamin A and iron supplements to boost Her immune system, and a deworming medication to rid him of any parasites that might be contributing to Her malnutrition. The Macheo service provider gave Jecinta all around-the-clock care and the nutrition he needed to grow healthier. During Her stay in the program, Jecinta made steady gains in both overall health and milestone development. After three months in tHer care and support, Justine made a tremendous progress by attaining 7.6 kilograms. He eventually became an active, mobile and smiling baby boy. Through the program, Jecinta’ mother was also educated about proper nutrition and feeding practices for children, as well as warning signs of malnutrition from trainings offered by Macheo. Stacy also was trained on proper parenting, hygiene and cleanliness.

Jecinta is one of the dozens children who are now enjoying healthy childhoods, thanks to the lifesaving care provided by Macheo children’s organization. However, Macheo social worker has been making follow ups to ensure that Jecinta’ mother is in a capacity to provide a safe, loving and compassionate environment where Jecinta will continue to thrive and enjoy a happy childhood even after exiting from the program. Macheo is dedicated to helping children reach their highest health potential and experience life in a positive way. After making tremendous strides in offering care and support to malnourished children and providing counseling to caregivers about optimal feeding practices, the Macheo service providers feel more confident in their services.