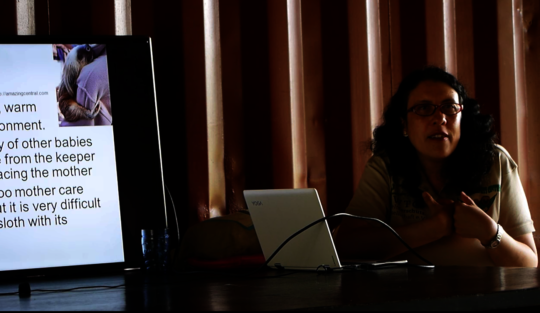 Although 2018 ended a little bit in an unfortunate incident, with the rescue van being rammed off the road by a speed devil. GHFS was able to make a positive start in 2019. Not aware that a whiplash would have such house-binding consequences, I had to refrain for most of December and January from activities like rescues and releases, and actually most activities. The verdict was: no pushing, no pulling, no lifting and no carrying. And of course, no driving and exercising.

Fortunately, the GHFS team picked up all these activities, and rescues and releases continued. Our vehicle is still not repaired and we use private cars to do the rescues and releases. So most important is that I can tell you, we are continuing our work. We are immensely grateful for the end-of-year donations that came in, and which help us maintain our current level of activities. And also help with improvements to how we care for the animals.

In cooperation with our German partner WTG, we organized in January a Medicine of Sloths workshop for veterinary doctors and held a Wildlife Welfare Roundtable Discussion with a diverse group of stakeholders. The Medicine of Sloths workshop was taught by Claudia Brieva, lecturer in wildlife medicine at the University of Bogota in Colombia. She reserved a week out of her busy schedule to come down to Suriname and teach seven local veterinary doctors how to care for sloths that are in need of specialized care.

Biologist Carlos del Valle kicked of the meeting with a presentation about the taxonomy of the Xenarthra. Claudia Brieva then continued with the natural history of sloths, anatomy of sloths, followed by a general presentation about the medicine of sloths and diseases. At the end of the day, a sloth was examined prior to release as the animal had a small hairless spot on a leg. After treatment the animal was released as the conclusion was that he did not need to be held for further treatment. On the second day a rescued anteater was examined prior to release by the whole group of veterinary doctors. Then Claudia Brieva continued with the subjects of rehabilitation, post confiscation management and the care of infants. Two post-mortems were conducted by the group on animals that had unfortunately died last year shortly after they had been rescued. Nothing we did not know already, showed up in these post-mortems. However, it was a useful experience for the veterinary doctors.

The Wildlife Welfare Roundtable discussion was a good starting point for discussion with a diverse group of stakeholders on how the health of wildlife is linked to our own health. Participants had been provided with information on our website put together by Rory Wakeford, a volunteer with GHFS. Daniela Schrudde from WTG gave an introduction into the concept of One Health, showing how complex systems can be disturbed and lead to dire consequences for human health. The participants were very much engaged and looking forward to follow-up discussions on the different aspects of wildlife welfare and the role they play in helping to ensure welfare for animals and human beings alike.

It was a busy but good start of 2019 and we are looking forward to sharing with you more about how we use information, knowledge and discussion to improve the welfare of the animals we work with. We wish you a Happy Year of the Earth Pig. And thank you for supporting our work! 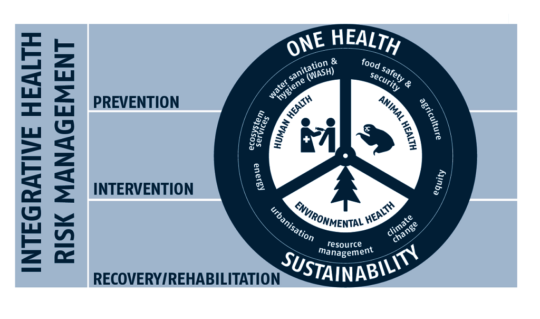 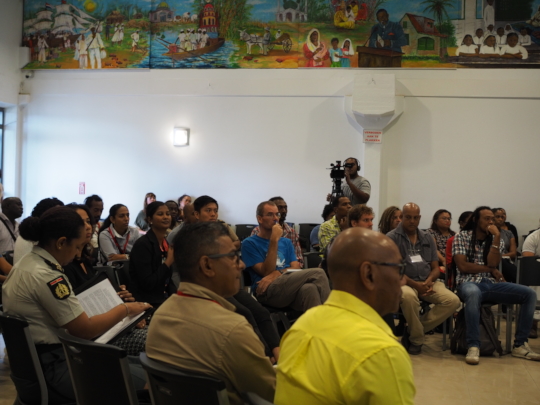 Participants in the Wildlife Welfare Roundtable 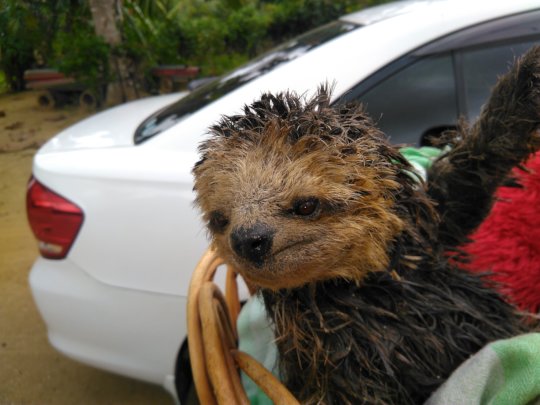 Deforestation rescue in a rural area 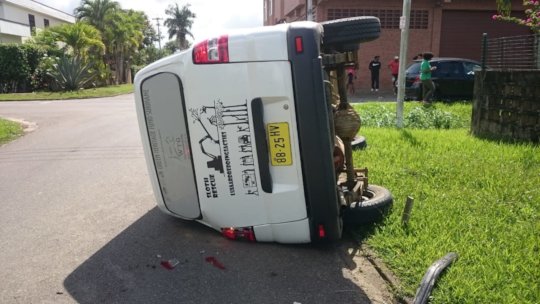 We normally have our report in on time, even though we tend to be deadliners... This time though it is late, because I was unfortunately rammed by a speeding car that ran a stop sign on the 23rdof November. The bus was hit in the rear against the wheel, spinned 180 degrees, and facing in the direction from where I came, the sloth rescue bus came to a halt and flipped on its side… With a whiplash and some bruises, I was lucky to get out, somewhat unharmed. I was glad, there were no rescue animals in the car or other passengers. But I was definitely shaken by this. Even if we drive as safely and defensive as possible, if the other road users do not follow the traffic rules, there is little we can do to avoid traffic accidents. Fortunately, no serious personal accidents, just a lot of material damage.

Since the end of August we had the usual flow of animals, sometimes five per week, sometimes only one. And sometimes two in a day. In this past rescue period we not only rescued anteaters and sloths, we also rescued one tree porcupine.

Champ
One of the three-fingered sloths we received had been rescued by someone who saw the animal crossing the road. As there was no forest around, he decided to put the animal in his car and take it home. He put it in a cage and tried to feed it, and although the animal was not eating, it took him two weeks to finally bring it to the Zoo. As you can imagine the animal was in bad shape, it’s kidneys had started failing and he was dehydrated and skinny. Our vets Eva and Audrey, however, were determined to pull the animal through. Never before have I had an animal with failing kidneys recover. So I was a bit anxious, but as I am not a vet, I just let them do their work. My job was to give him a name that would forebode their success. So I called him Champ. Every day, Champ was given IV fluids, and after a week his diarrhea disappeared. And he started eating the leaves we gave him. His treatment continued, and after two weeks he had recovered so well, we transferred him to the center where he was observed for several more days. And boy, did Champ want to leave his enclosure when he saw all those beautiful trees. So on the 20thof October, International Sloth Day, Champ was released and looked very happy as he climbed fast into the canopy of his new home.

International Sloth Day
On International Sloth Day, we not only released Champ, but three more animals. One was a two-fingered sloth and two more three-fingered sloths. It was a very fitting way to celebrate this day. On this particular day we also saw how Jinkoe and Rory went together away into the forest. Jinkoe has been regularly coming back, but little Rory seems to enjoy himself (I think it is a he) very well in the trees and we only see him occasionally in his favorite tree, and he has been back only twice. Both Jinkoe and Ostrich like to roam into the forest for several days at a time, and they come regularly back to sleep in their buckets for the night to leave again in the morning. All of them, with the exception of our sleepy two-fingered babies, left before the official opening. As if they did not feel like seeing all these people roaming around their houses. As the official opening was over, they started coming back again.

As always, thank you for your support, and please check out our Thanksgiving post for some amazing glass sloth art from one of our loyal donors. 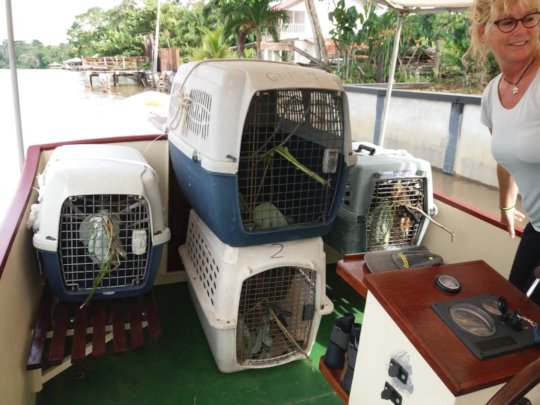 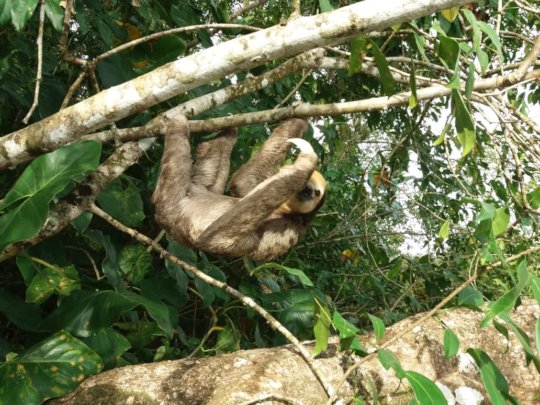 Champ leaving for his new home. Is he waving? 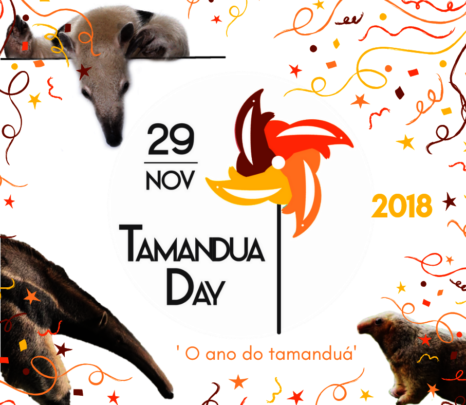 International Anteater Day on the 29th of November

We are Officially OPEN! 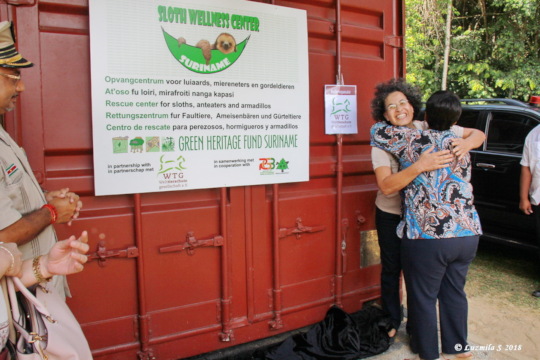 Heartfelt hug from the Minister after the opening

It is TRUE, we are now OFFICIALLY open as of Friday, the 2ndof November 2018. It was a festive day, with many high government officials attending the opening ceremony to be performed by Mrs. Roline Samsoedien, Minister of Spatial Planning, Land and Forest Management. This Ministry is also responsible for all protected species in Suriname. For those of you who have been following us for a longer time, the long-term cooperation with this Ministry’s Nature Conservation Division and the Game Wardens is already a known fact. But still, we were happy to see it reasserted in this manner by the Minister’s willingness to officially open the center. You can check out our report on this festive day on our website. This day would not have been complete without at least one release. So we released three sloths in the forests around the center on this beautiful day, to emphasize our message that Wild Animals Belong in the Wild. One animal was a beautiful older male we had rescued the day before from the building site where probably not long ago his home forest had been.

Preparing for our Wildlife Welfare Workshop

We are now in full swing preparing for the wildlife welfare workshop with the support of our partner Welttierschutzgesellschaft as well as for the medicine of sloths workshop to be held in January. As part of this work we had Gabriella, an old-time volunteer, now studying animal management in her home country of the United Kingdom, who stayed with us for almost 10 weeks at the center. Next to helping with the animals, for which she would get up especially for baby Bolletje (Little Ball) every two hours during the night to feed him, she was also working on cleaning our data for the last three years and preparing a map on which we could see where the hotspots are when it comes to sloth and anteater rescues. This information will feed into our Sloth Action Plan for Suriname, which will involve all stakeholders and help these animals’ survival in urban areas and beyond.

As the Minister also indicated in her speech, we will be more closely working together on providing education to raise awareness about the sloths, anteaters and armadillos and thus help them be better protected. We started in any case with again raising awareness on international sloth day, this year it was on the 20thof October, with a short message about not taking selfies with these animals. And if possible, not with any wild animal. Because wild animals are not photo props.

Now we can finish our report by saying “Welcome to the Sloth Wellness Center”, we are open to receive you! 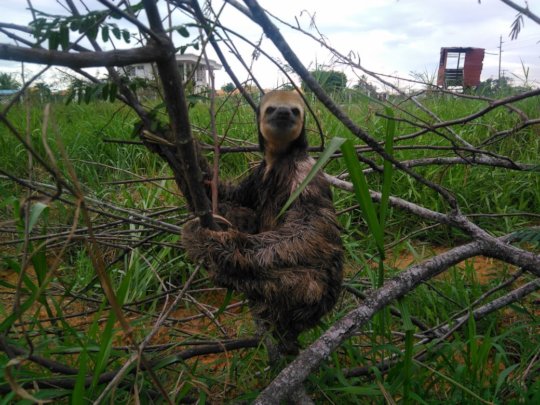 Is there hope? Will they take me to a new home? 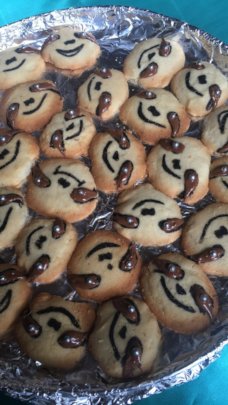