A Big Thank YOU! 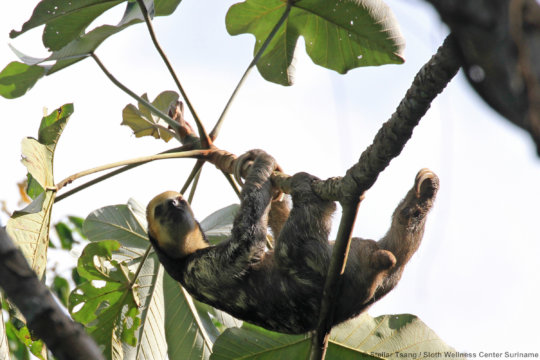 Thank you! From 19November

You were there from the beginning when we started this project in 2015. You helped us gain a place on Global Giving in March 2015 and kept us going. You helped us rescue more than 450 animals over the past 4.5 years. And we wrote in total 22 reports to you, including this one. We reported on our rescue animals. Among them, a mother and baby anteater, Salvador Dali, who were in intensive care, but who we were able to release. Two sloth youngsters, who became confident enough to roam around the house and hide in unexpected places for a nap. Bas, who had his claws cut off, but through the TLC of the volunteers became confident again and recovered. Although it took 2 years for the claws to grow back. All the babies that came and went. And then, sometimes, the animals that unfortunately did not make it. And the many releases we continued doing of animals all healthy, but just in need of a safer place to live.

It was this same year that brought fame to our foundation through the CNN Heroes award. That most definitely helped propel our plans forward to build the professional shelter in a forest environment for our animals. And indeed, in 2017 we started building and in July 2017 we moved. We came with animals, that either stayed with us for a while, roaming in the forest around our building, and after a while were not seen anymore. Although we had some sad moments when we lost our first babies who matured here, we also experienced the happiness of 19November giving birth already to her second baby, while she remains around the center and graces us with her presence.

We are closing out this project, because you helped us fund it for more than 100%. THANK YOU! Please check out some of the highlights in this short video. As you know, you can remain a donor to our project by supporting “Sloth Sanctuary Suriname sequel: the whole story!” We wish you a slothified 2020.

Thank you animated picture of highlights 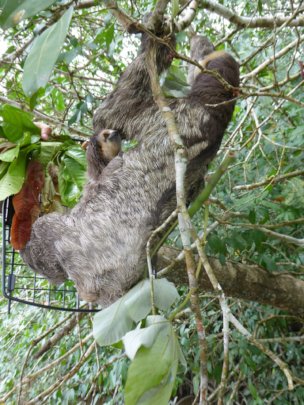 Thank you from this baby released with her mom! 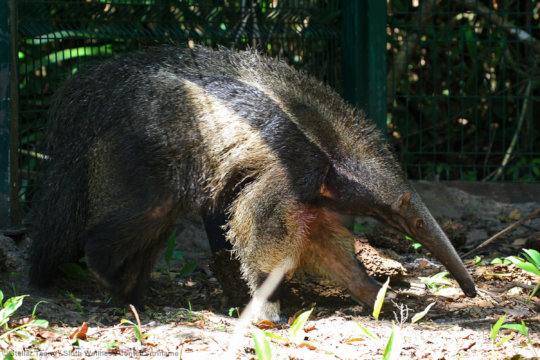 Thank you from Igor who healed and was released 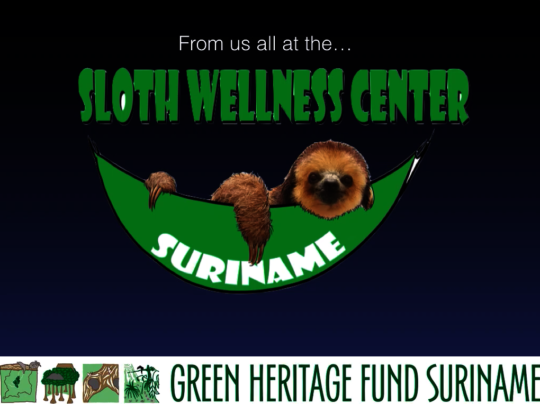 Thank you from all of us at the SWC! 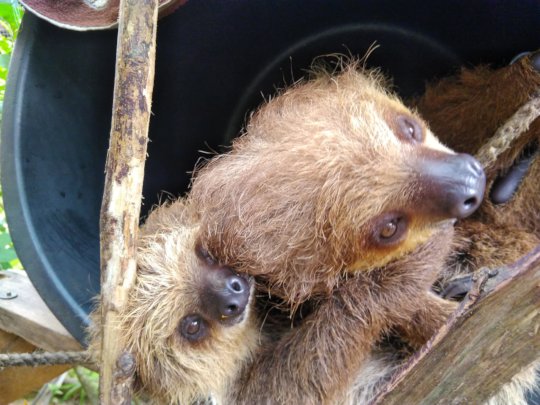 Thank you from Stevie and Bolletje

In November we have to report on 19November 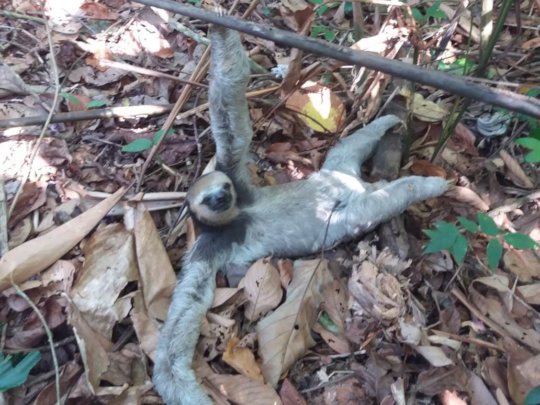 19November came back for her baby 9July

In the past months we have been busy working on renovating not only enclosures for the animals, but also on the sleeping quarters of the staff at the rehabilitation center. As the permanent workers were both on a holiday, we decided to paint their sleeping quarters which were still in the dark brown color of the primer paint. The walls of the shipping containers were also difficult to clean because of the coarse primer layer, and the already small rooms were also seemingly smaller because of this dark color. Adding a layer of white paint to these walls, made them optically bigger. The white paint was reflecting the light of the lamps, creating more light in the rooms making it easier to read and see better in the rooms. After all, if we want to have happy animals, we have to ensure that the people caring for them are also happy. In this manner we wanted to show also how much we appreciate the hard work of the center staff who are caring 24/7 for the animals in our care, but also for the animals living in the forest surrounding us.

And this brings us to a special story about our three-fingered sloth friend 19November and her baby 9July. At the end of September, while the center staff was preparing to go to bed after a long day, Yvonne suddenly heard something in the forest. It was already around midnight, but she heard the call of a baby sloth. Intuitively, Yvonne felt it had to be 9July. Together with Patrick she ventured out into the forest in the dark and after searching for a while they found a baby sloth on the ground. 9July had fallen off her mother. Yvonne and Patrick brought the baby to the center, kept it warm, gave it food and for our records also weighed it. While she reported to us about this, all of us were worried. What had happened? Where was 19November? Did we want to care for a three-month old baby? Or had we rather that her mother was fine and took 9July back. For those of you who know us, the answer was a definite “we want her to be back with her mom!”

The next morning, Yvonne went back into the forest around our center and started looking for 19November and was calling her. Let me remind you, this was a sloth that had lived in my house in the city for 5 years, and she knew who we are, at least we like to think that. And lo and behold, 19November was aware of us, and started to climb down. While doing so, maybe as she was also anxious about her baby, as she had almost reached the ground, she grabbed on to a liana that was not strong and came falling to the ground. Fortunately, it was not a fall from very high. Yvonne picked her up and gave 9July back to her mother. And off they went into the trees again.

We have seen them regularly together since. And my impression is that 19November is even staying closer to the center. Maybe she knows that we will help her, if her baby is in trouble again.

With Thanksgiving around the corner, we wish to thank YOU for the support you give to us. As a result of your donations we can provide good care for our animals and for the staff taking care of them 24/7. We hope we can count on your support on Giving Tuesday, on the 3rd of December. 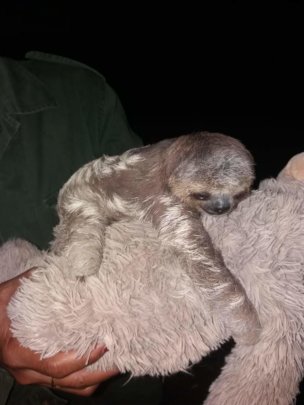 9July holding onto a toy sloth instead of her mom 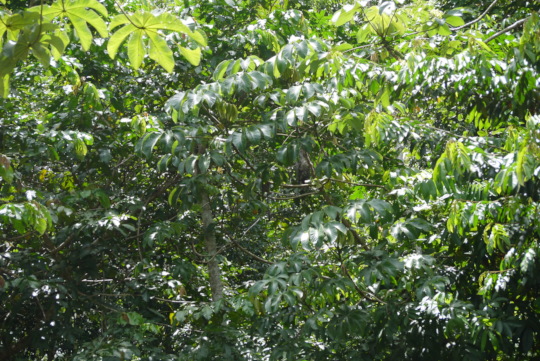 The safe distance 19November stays at from us 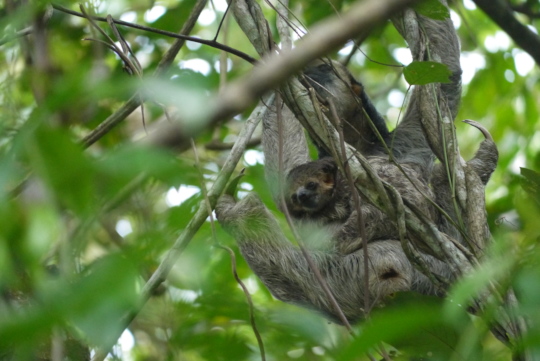 At the end of October still happy together 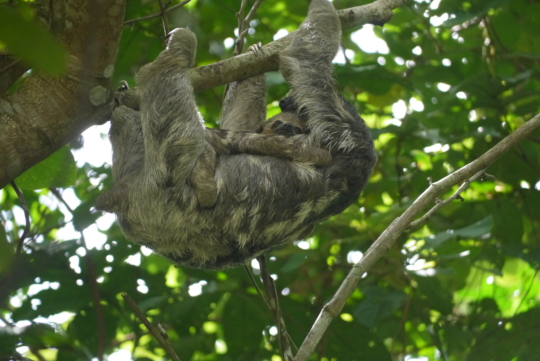 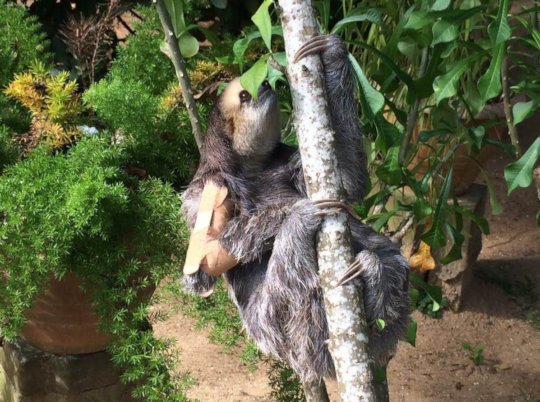 Aza-Sita exercising with her splint

The long dry season was starting to take its toll around the second week of September. Rescues were once again increasing and we saw a similar pattern as earlier in the year when we were experiencing the drought. Animals would come in dehydrated or wounded as they came in conflict with dogs and were not able to defend themselves because of weakness. One such animal was reported on a Saturday while we were all out in the field doing a project in a local community just prior to the end of the school holidays. Our volunteer vet Eva ensured that the right contacts were made, and that the animal was transported to the vet on call that weekend. The sloth had a broken arm. The last time, the fracture was too complicated and could not be set. But this time it was a clean cut, and it was a young animal. As she was still weak applying a splint or surgery could only be done if the animal was strong enough.

From our experience earlier this year, the animal was given intravenous fluids for several days, and she was visibly improving even though she had to be in a lot of pain. One thing our vet Eva noticed, as well as the vet treating her, was that this young female sloth was supporting her own arm with her other arm. After 5 days the surgery was planned in the evening, after normal business hours. Although the idea had been to sedate her and perform surgery, after a very thorough examination Leontine, the vet treating her, decided to apply a splint on the exterior and not to perform surgery. After the splint was set, which was not a simple task, the vets decided to name her. Fabienne, the vet on call said Sita, and Eva said Aza, because it means strong in Swahili. So we mostly refer to her as Aza-Sita, and she is indeed strong, Strong Sita. The splint was removed two days ago. And the bone has healed.

In preparation for her increased mobility and rehabilitation the volunteers decided to renovate one of the enclosures in the weekend that International Sloth Day is celebrated. This would be our first enclosure that was going to be built around a tree. Our carpenter Orlando had prepared all the wood and it would be a reasonably simple task of fitting all pieces together. However, it was also the first time we were building such a high cage, 4 meters high! Fortunately, two athletic volunteers used to tree climbing were in no time in the tree and the enclosure was almost completed. We hope to complete it this weekend, when we have the additional materials, so that Aza will be able to start exercising her arm.

Our continued efforts to improve our rehabilitation work would not be possible without your support. The well-being of every single animal making a slow but steady recovery makes it worthwhile for us every single time. 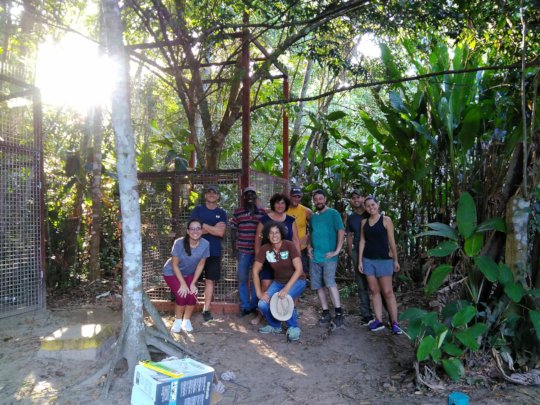 Volunteers posing after a hard day of work 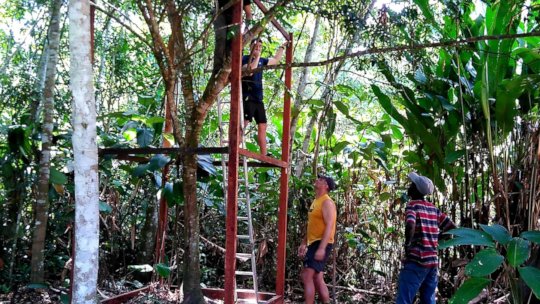 Some of the work in action for Aza-Sita
‹ 1 2 3 4 5 6 7 8 9 ... 15 ›
WARNING: Javascript is currently disabled or is not available in your browser. GlobalGiving makes extensive use of Javascript and will not function properly with Javascript disabled. Please enable Javascript and refresh this page.