Slow but Steady Progress in Self-sufficiency for Koro Island 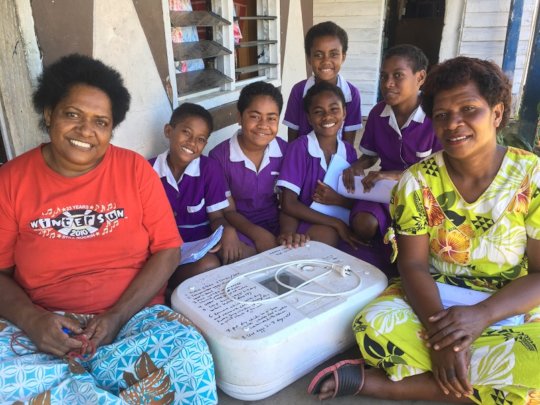 It has been a hot and very wet summer here in Fiji in the southern hemisphere at the Happy Chicken farm, and the hens are have been on their annual "vacation", not laying eggs so that they will have the resources to change their feathers for new ones (= molting).  We closed the hatchery for two months and have just begun to set eggs in the incubators again, as the weather is finally cooler and the hens are gettting back to work laying their precious eggs.

News from Koro Islnd in the Cyclone Winston disaster area:

We sent an incubator to the Nabasovi Women's Group in January along with 90 fertile eggs- which they successfully hatched, and so we sent a second lot of eggs in February, which they also hatched. But in March we unfiortunately did not have enough eggs to send. However, the oldest hens will begin laying in June, and they have retained 20 of the chickens, which will soon become the new breeding flock!  The woman's cooperative ageed to turn the incubator over to Senirosi Talei, "Bu Seini", who has good business sense, as she successfully runs the village 'canteen'.  Seinirosi will now receive special support to create her own hatchey business, hatching chicks monthly on behalf of the nearby villages.

Thea, the US Peace Corps volunteer supporting the project, will be travelling to Suva soon, to purchase school supplies on behalf of the community, and we will send back with her on th boat 90 fertile eggs for the incubator, starter feed for the chicks, supplemental feed for the breeding flock, and more cuttings of edible feed plants.

With the first lots of chickens sent to Koro, we had to also send many bags of feed, as the vegetation was so badly damaged that the chickens could find little to eat from the land. That was costly and burned up most of the donations, but it was desperate times.  Now local chicken feeds are becoming more available, with coconuts beginning to bear again, and mornina cuttings which we sent up with the trainees nearly two years ago, have grown into trees whose leaves make excellent feed when combined with coconut and cassava roots.

Our forging chickens at the farm recently taught us an additional wild plant, which the chickens absolutely love to eat- 'costus' or 'crepe ginger', which turns out to be edible for humans as well- see the photo below. We will now include this plant in the workshops, with one happening at the farm next week for a group of young men from Beqa Island

As local capacity and knowledge of the Happy Chicken methods spreads and increases on Koro, we may need to send an additional incubator to Bu Seine (in red in the photo below), in order to meet the needs of the island's fourteen villages.

Vinaka valkalevu- thank you SO much to the donors and to our helper Thea, and of course to the Nabasovi Women's group for making this all possible. 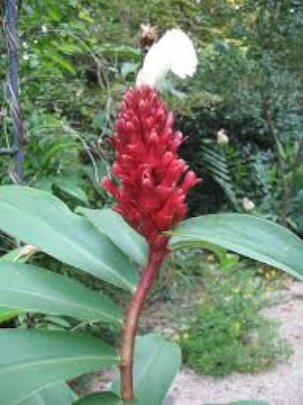 Children Arise to Help the Project 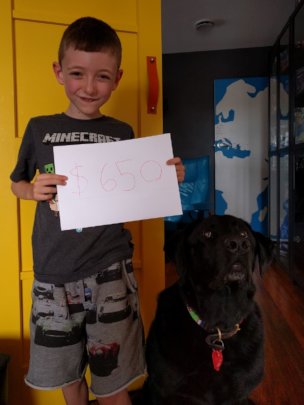 Xave is a successful fund raiser

Xave, a seven year old boy from New Zealand who visited the farm with his parents last August, was so taken by the chickens that he decided to help raise funds for the project when he returned home.  He drew pictures of the chickens and of birds and his father had the drawings lazer cut into wood.  With the help of his mother and a kind-hearted shop keeper, the ornaments were marketed.

Each ornament has this story printed on an attractive card-

''Hi I'm Xav,  I'm 7 years old and I love animals.  I have drawn and made these decorations for the Happy Chicken Project in Fiji.  I stayed at the Happy Chicken Project permaculture farm in August.  I learnt that they help the communities in the Fiji Islands to sustain an alternative food source while the reefs are closed to repopulate the fish. Villagers are sponsored to come to the farm near Sigatoka, where they learn to forage and grow the feed for the chickens. Then to raise, care and select the hatchlings for breeding, laying or eating. Thank You''

The lazer cut-outs sold well, and we were so very touched to receive some of the ornaments in the mail, as well as a sizable donation from Xave's family through GlobalGiving.

Yet another example of volunteerism by children came after Christmas, when two boys from Vanuatu arrived for three weeks as volunteers. They worked hard feeding our eight flocks of breeding chickens and tending to the hatchery, and baby chicks.  The boys were a true blessing to the farm. As a thank you for their service, we sent a small portable incubator back with them, as they plan to set up a small hatchery to support the project.  Based on discussions with Fiji and Vaanuatu Biosecurity scientists, and once we make a few suggested upgrades to the hatchery, we expect to have permission to send fertile eggs and day-old chicks to Vanuatu by April.  In the mean time the boys will try to access fertile eggs from local farmers to start a breeding flock of local chickens of their own, which can then be used for selection purposes for cross-breeding as the project grows.

These efforts by the younger generation, together with the loving support of their parents is very encouraging.

Thanks again so much to all of our supporters, and blessings to you all. 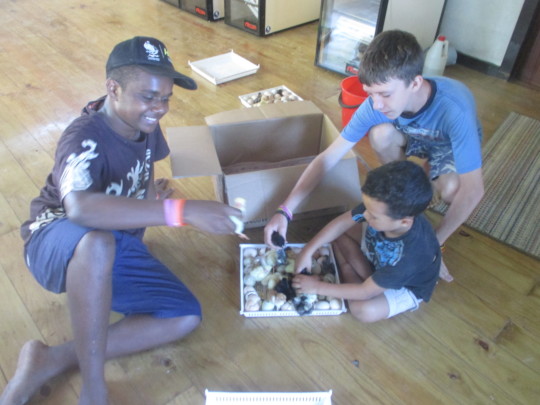 Vanuatu Volunteers Helping in the Hatchery 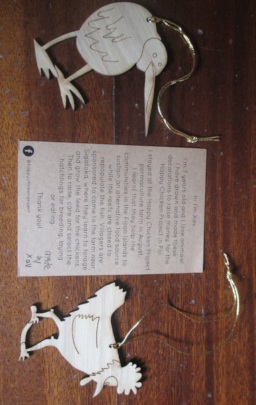 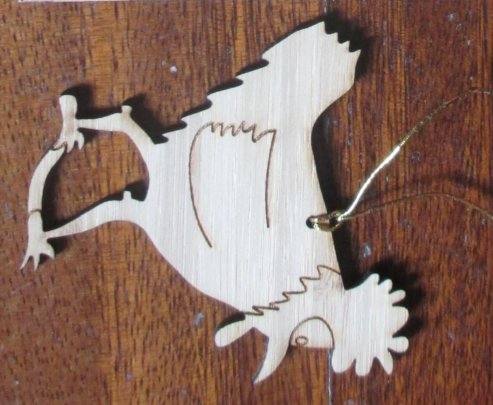 Hatching Chicks Give Hope of Recovery 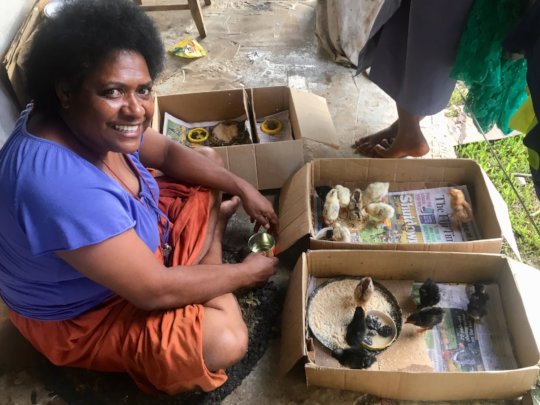 Communities continue to recover from the horrific cyclone disaster, and while some families continue to live in tents, and some classrooms at the schools continue to operate from tents, the rebuilding process is going well.  However, the vegetation and traditional agroforests are recovering more slowly, as so many of the breadfruit and coconut and banana trees fell, but fortunately the bananas have already come back, and some of the surviving coconut trees have begun producing as well.  Sweet potatoes are being produced in abundance, as is cassava. Full recovery will take another year or two.

The chickens we sent out with the workshop participants last year are laying eggs as well, mostly relying on foraging and on waste food.  Communities have been taught how to prepare wild plants and to mix Morniga leaves with the chicken feed, but for now the chickens must be kept at low densities in each community, until such time as the coconut trees begin bearing heavily again, with the ideal chicken diet being coconut, morniga, and cassava, with supplemental foraging.

We have thus far sent out incubators to three communities affected by the disaster, with the 90-egg, 40 watt machines operating on solar power.  Unfortunately, communities without access to solar power have been left out, and so we are looking into a simple low cost solar system as a solution, but in the mean time the villages with solar power are hatching chicks on behalf of the other communities.

The chicks are been hatching very successfully, and every month we are sending additional fertile eggs by boat for the community to incubate. The children help by digging worms and if an egg is infertile, it is boiled and crushed to feed the newborn chicks.  A new excitement occurs with each new hatch, especially attracting the children, who learn to gently hold the chicks and to feed and give then fresh water regularly.

So we are very happy to report that hope has now replaced desperation, and the baby chicks are very much a part of that hope for a new day and for a better future.

Thanks so much for being part of this effort. 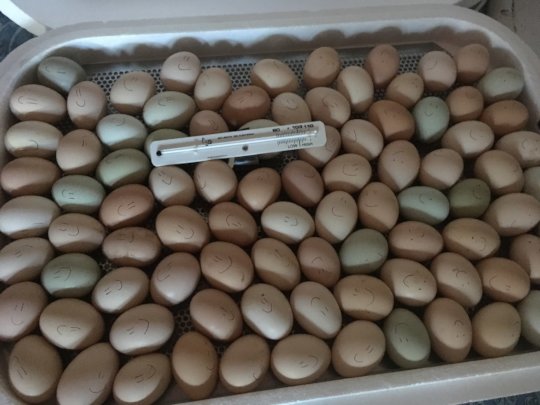 Happy Eggs, marked for turning in the incubator
‹ 1 ... 5 6 7 8 9 10 11 12 ... 22 ›
WARNING: Javascript is currently disabled or is not available in your browser. GlobalGiving makes extensive use of Javascript and will not function properly with Javascript disabled. Please enable Javascript and refresh this page.