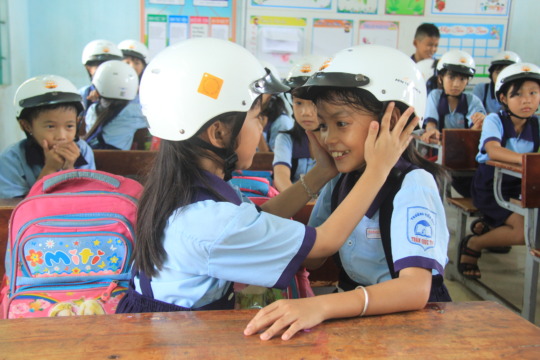 Our submission to GlobalGiving's photo contest.

We recently celebrated the 4th UN Global Road Safety Week in Vietnam with thousands of community members who live near a major industrial port. We also hosted school-based activities with primary school students to reinforce important helmet safety lessons. Read on to learn more about these exciting initiatives.

AIP Foundation’s photo was selected as a semi-finalist in GlobalGiving’s annual photo contest. Our submitted photo was captured during a helmet safety knowledge exchange between truck drivers and primary school students in Ba Ria-Vung Tau Province, Vietnam, in December 2016. The event was held as part of our Lifting Safety program, a partnership with APM Terminals.

Truck drivers, local authorities, and transportation professionals shared their safe driving skills knowledge with more than 3,000 members of the Cai Mep port community in Ba Ria-Vung Tau Province, Vietnam, at the “Get Home Safe” festival. The event was hosted as part of the Lifting Safety program and in commemoration of the 4th UN Global Road Safety Week, which ran worldwide from 8-14 May, 2017. Families participated in engaging road safety games and activiti. They also watched music and comedy performances during the community event. In December 2016, truck drivers participating in the program taught students at a nearby school about the importance of helmet safety, as well as how to properly wear their new helmets.

Engaging extracurricular activities reinforced 600 students’ helmet safety knowledge at Ap Dinh Primary School in Hoc Mon District, one of the six schools involved in Abbott’s Helmets for Families program. Students’ behaviors have shifted during the course of the 2016-2017 program, with the average helmet wearing rates across all four schools in the district reaching 81%, compared to just 31% at baseline. Hoc Mon District is a low-income, agricultural area of Ho Chi Minh City.

Senior representatives from Abbott visiting from the pharmaceutical company’s U.S. headquarters volunteered during the extracurricular activities. During the event, students participated in a Ms. and Mr. Helmet Safety competition, which included dance performances, helmet wearing demonstrations, and tests of their road safety knowledge. They also played creative games that taught them about the differences between non-standard and standard helmets, the importance of wearing helmets, and how to wear their helmets correctly.

In the 2016-2017 school year, the program has provided 5,600 high quality helmets to students, teachers, and parents through donations and subsidies. The program serves four schools in Ho Chi Minh City’s Hoc Mon District and two in Hanoi. Since its launch in 2013, Helmets for Families has served beneficiaries at 15 schools in Vietnam, and has provided more than 30,000 quality helmets through donations and subsidized exchanges. 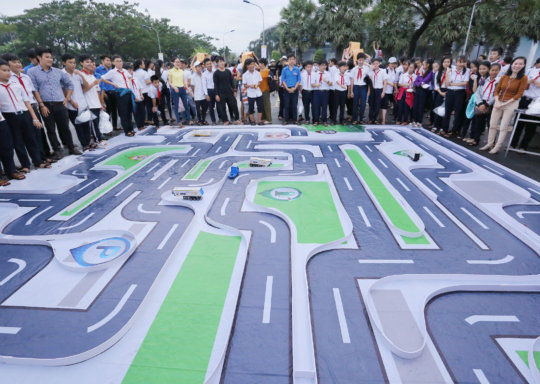 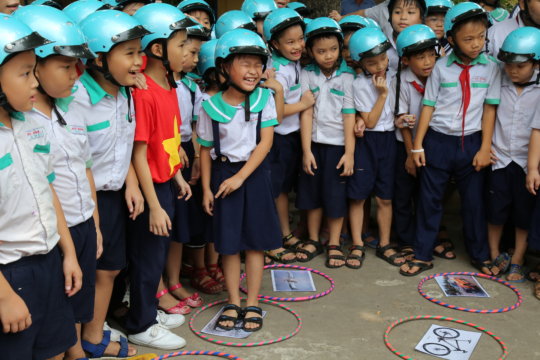 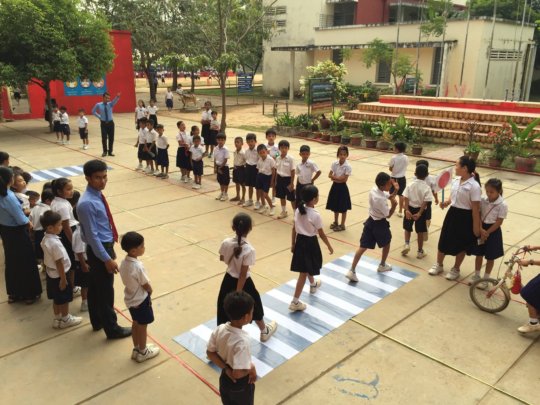 We kicked-off 2017 by providing more than 600 students with helmets and engaging road safety activities at primary schools in Phnom Penh and Siem Reap. Stay tuned for more on how our school-based programs are creating a safe generation of young road users.

Check out our 2016 Annual Report to learn more about how we made roads safe in Cambodia last year, as well as the life-saving work we championed in our other program countries.

Nearly 550 primary school students received quality helmets and were encouraged to wear them as part of their school uniforms during the kick-off ceremony for a new Helmets for Kids program, which is supported by the Australian Road Research Board (ARRB). The road safety initiative aims to make young road users attending Anuk Wat Koruk Kosal Primary School in Siem Reap, role models in their community. The students, along with their teachers, also participated in educational activities during the event.

ARRB is an Australian organization, which provides research services in the road and transport industries, began collaborating with AIP Foundation in 2012. It has also supported schools in Vietnam and Thailand. It also assisted in developing and implementing road treatments in communities served by the nonprofit’s pedestrian safety program in China.

Anuk Wat Koruk Kosal Primary School is located on a busy highway in Siem Reap Province. In 2015, one student passed away due to a road crash. The student was not wearing a helmet and suffered a fatal head injury during a motorcycle crash while his father was driving him home from school. Before the program started, 80% of students commuted to school by motorcycles and bicycles though only about 1% wore helmets.

Read the full press release from the event here.

Hong Leong Bank Cambodia Plc. teamed up with AIP Foundation and #SaveKidsLives to provide nearly 100 grade 1 and 2 students with life-saving helmets. The handover ceremony took place at Anuk Wat Primary School in Phnom Penh. During the event, the students participated in educational activities about how to follow traffic rules and learned about the importance of wearing their new helmets.

"Providing safety helmets to these kids is our way of showing our commitment in protecting the future generation of Cambodia," Mr. Joseph Farrugia, CEO of Hong Leong Bank Cambodia Plc., said.

The #SaveKidsLives campaign was launched in the lead-up to the Third United Nations Global Road Safety Week in May 2015. It calls for global action to help halve road deaths and injuries by 2020, and has also been involved in advocacy efforts securing road safety's place in the Sustainable Development Goals. 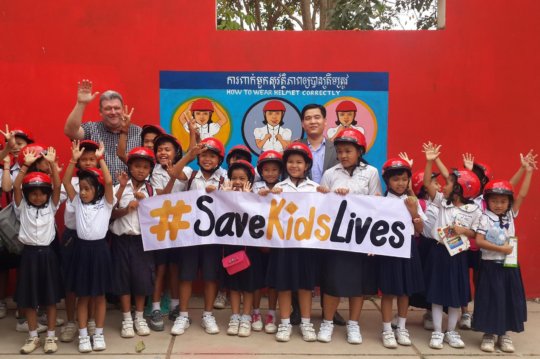 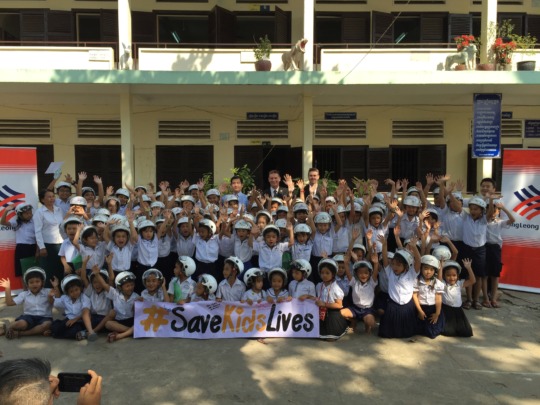 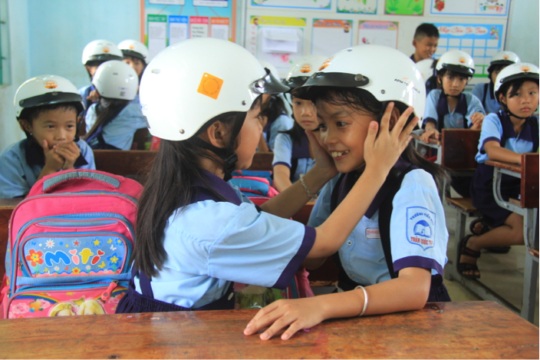 Students help each other put on their new helmets.

Recently, our road safety programs in Vietnam have worked with students and families from diverse backgrounds - ranging from a community in an agricultural zone of Ho Chi Minh City to one neighboring a major shipping port. Read on to learn more about these innovative initiatives and check out our newly published 2016 Annual Report for more on our life-saving work.

Helmets for Families, supported by Abbott, is expanding its road safety education to four new schools in the Hoc Mon District of Ho Chi Minh City, a suburban and agricultural zone where up to 90% of the participating students’ parents are manual laborers. This year, Helmets for Families will continue its work toward increasing road safety literacy and safe behaviors amongst Vietnamese families by distributing more than 4,700 high quality helmets to students and teachers, and exchanging nearly 900 subsidized helmets to parents in Hoc Mon District and at two schools in Hanoi.

The program hosted its 2016-2017 school year kick-off event at Nhi Xuan Primary School in the Hoc Mon District. Nearly 1,000 students, teachers, and parents attended the ceremony. They were joined by representatives from Abbott, as well as officials from the Ho Chi Minh City Traffic Safety Committee, Department of Education and Training, Traffic Police, and local authorities.

A pre-implementation survey revealed that 76.3% of the students at program schools in Hoc Mon District commute to and from school by riding on their parents’ motorcycles. The average student helmet-wearing rate at these schools is about 30%, well below the Ho Chi Minh City average of 48%. Only 1.3% of parents surveyed had the correct knowledge of what makes a high quality helmet.

APM Terminals together with AIP Foundation, is rolling out a new training program in Vietnam to help make the port community of Cai Mep in southern Vietnam safe. More than 45 truck drivers and other CMIT employees, along with executives from the APM Terminals’ operated Cai Mep International Terminal (CMIT), joined 500 students, teachers, and parents at Tran Quoc Toan Primary School, which neighbors the port, to address road safety issues in their community. The truck drivers work for CMIT, a subsidiary of the Netherlands-based port operator APM Terminals. The event is the inaugural activity for Lifting Safety, a proactive road safety program developed by AIP Foundation and APM Terminals. So far, it has provided nearly 1,000 helmets and road safety education classes to children at Tran Quoc Toan and Toc Tien primary schools.

The Lifting Safety program aims to identify and mitigate road safety risks in the community near the port through a combination of targeted education, awareness, and community engagement programs. Both the national- and provincial-level traffic safety committees have worked closely with APM Terminals and AIP Foundation in developing and implementing the program. Over the next year, Lifting Safety will implement truck driver trainings, a mass media awareness campaign, and community-based activities in and around the CMIT port in Vietnam.

“The project has been very influential... They all see the helmet as a close friend, a partner that goes to school with them every day,” Pham Hieu Trinh, Chief Secretariat of the Gia Lai Traffic Safety Committee, said. 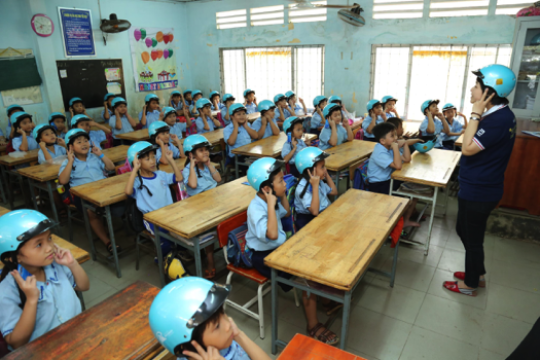 A volunteer teaches students how to wear helmets. 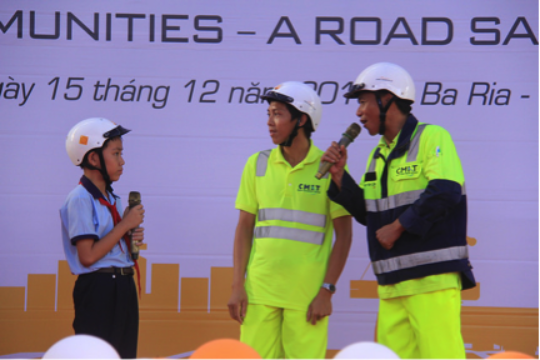 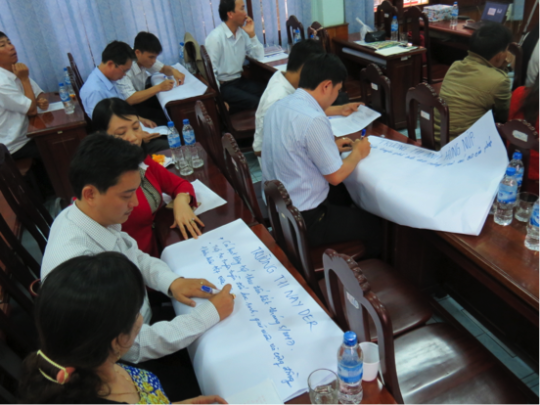 ‹ 1 ... 8 9 10 11 12 13 14 15 ... 28 ›
WARNING: Javascript is currently disabled or is not available in your browser. GlobalGiving makes extensive use of Javascript and will not function properly with Javascript disabled. Please enable Javascript and refresh this page.