From Lost to Loved 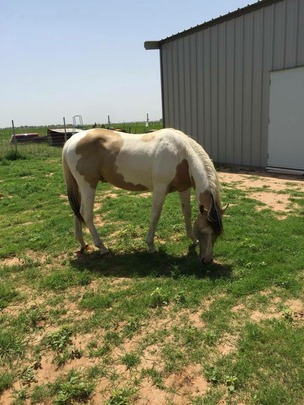 The day we first met Jeremiah

On an ordinary July day, Easy R Equine Rescue received a call from a lady in Lubbock who has been a friend and supporter of our organization for a few years.  She explained that there had been a stud horse wandering around the countryside on the outskirts of town for two weeks. A kind neighor had penned the horse in his yard and had tried every method he could to locate the owner--to no avail.  He did not have property that was horse-friendly, nor did he really want to own a stray horse.  Luckily he contacted our mutual colleague, and she called Easy R begging for some help with this stray stud horse.

Of course, we don't know the circumstances surrounding why this horse was out loose for several weeks. These days, there are numerous ways an owner can find a lost pet, but it didn't seem as if anyone was looking for this horse.  If we had not chosen to pick him up, the sheriff's department was planning on picking him up and taking him to the sale barn.  That would have mostly likely resulted in him being bought by a kill buyer and shipped to Mexico for slaughter.  So we picked him up.  And named him Jeremiah.  "For I know the plans I have for you", declares the Lord, "plans to prosper you and not to harm you, plans to give you  hope and a future"-Jeremiah 29:11.

So Jeremiah reluctantly loaded in a trailer and took a trip to the vet, maybe for the first time.  And boy did he get worked over! He was castrated, vaccinated, had his teeth floated and his cracked hooves treated by a farrier.  He also had an embedded wire removed from his hoof and was placed on antibiotics to prevent infection.

And then we got a $600 bill.  We were able to pay it because of programs like Global Giving and donors like you.  We knew when we picked up Jeremiah that the initial expense would be high.  But his life is important to us.  And once he gets formal ground training and then under-saddle training, he will make a great performance and/or recreational horse for someone special.  His basic care (as with the other 13 horses at Easy R) costs approximately $200 per month.  We greatly appreciate donors like you who help us carry out our mission of rescuing horses in need and giving them a hope and a future.  Just like Jeremiah. 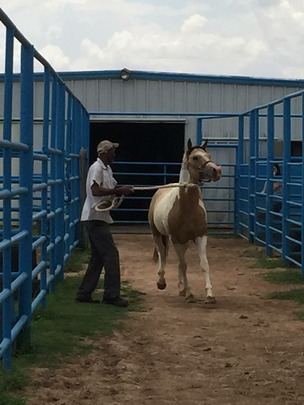 At the vet getting worked over 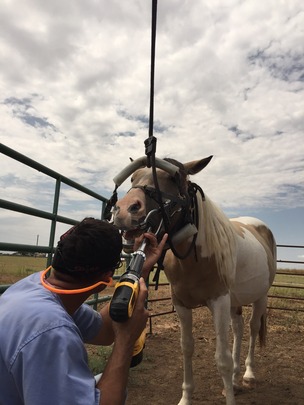 Getting teeth professionally done by the dentist 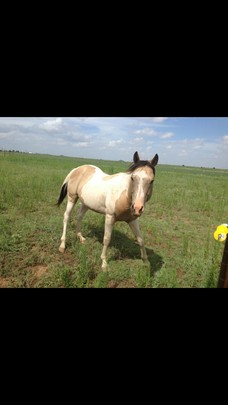 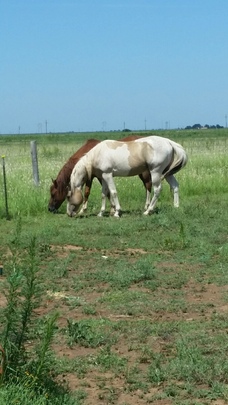 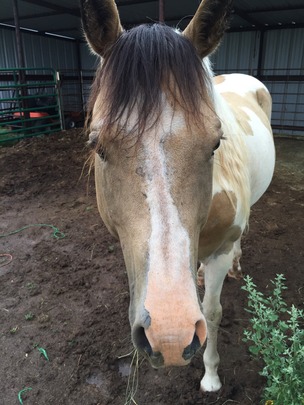 Jeremiah has hope and a future

One Man's Trash is Another Man's Treasure 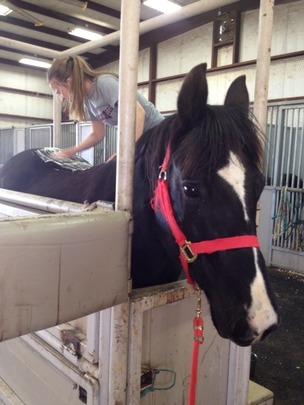 Hershey's trip to the vet

A few summers ago, Easy R Equine Rescue received a call from a young lady who lived in our city but at that time was working during the summer at a cattle ranch 3 hours south of us. She explained that one of the horses on the ranch was going to be euthanized if she couldn't find him a home. The horse, named Hershey, was a ranch horse that was a hard worker, easy to ride, and up until then, had been a valuable equine asset on the cattle ranch.  No one really knew how, but Hershey had sustained an injury to his stifle which rendered him unable to be ridden to work cattle. Because he was young, and otherwise healthy, the owners of the ranch had a veterinarian x-ray Hershey and provide a diagnosis and prognosis.  The vet confirmed an injury to the stifle that would be similar to an ACL tear in the knee of a human.  He recommended "time-off" and rest for Hershey to heal.

Well, on this particular working ranch where the horses are tools and not companions, Hershey wasn't going to get time off. If he wasn't being useful or earning his keep, he was going to have to go.  And by "go", I mean being put down along with a few senior horses that were no longer useful either.  Thankfully, the young lady who contacted us knew the value of this kind, gentle, hard-working horse.  She pleaded with us to help her save Hershey.  And, of course, we did.  Why wouldn't we??

Because we were not sure about the type and extent of Hershey's previous injury, we took him to an equine lameness specialist in our area.  This doctor told us that at one point Hershey might have had a stifle injury but that his current source of pain was some serious arthritis that had formed in his lower spinal processes, probably the result of rearing up and falling over backward.  Hershey was injected in between the spinal processes and then received two treatments of shock wave therapy.  The treatment decreased his pain and improved his physical movement.  Although he still obviously has some effects of the initial injuries, he is in better physical condition and can carry small riders.

Hersheyhas been an integral part of our youth program each summer.  Because he is gentle and kind, he is one of the horses we can trust to be around children and teens and to do his job of carrying riders and standing still and quiet to be groomed.  Many kids who have participated in our Horseplay groups have never been around a horse, touched horse, or ridden.  He is a valuable asset to Easy R, and even though he will never be able to ride really hard and carry adult riders, his job is very clear--to be a kind, gentle guy who introduces little ones to the world of horses.  At the ranch where he previously lived he was going to die because he wasn't useful. He was going to be trash.  To us and the children who meet him at Easy R, he is definitely a treasure.

The donations we receive through the Global Giving program go directly to the care of Hershey and horses like him.  Because of the generosity of people who give, we were able to provide good, quality (but expensive) veterinarian care, chiropractic treatments, and therapeutic farrier care to Hershey.  Our rehabilitative efforts will continue with Hershey and all the other rescued horses at Easy R.  They are all treasures in our eyes. 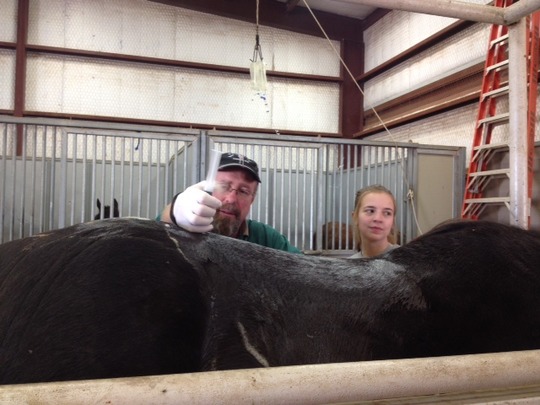 Dr. Brock is injecting medicine in Hershey's back 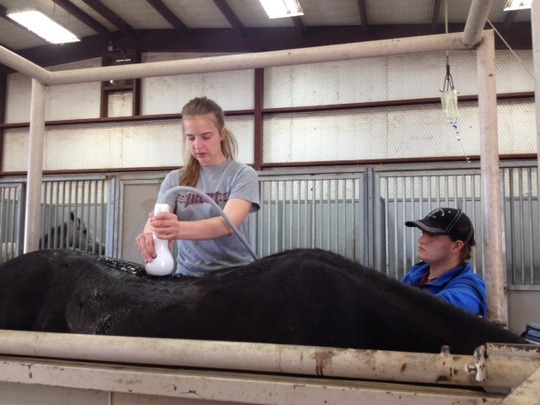 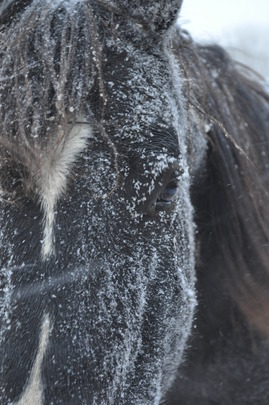 Hershey in the snow 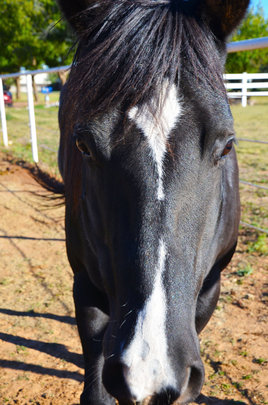 Such a pretty face 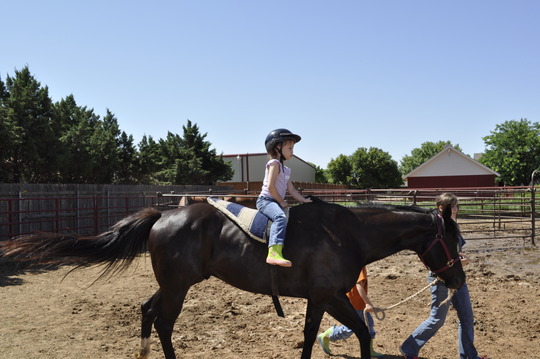 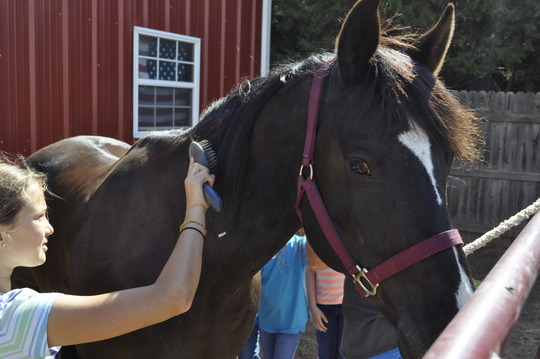 Loved by the kids

The Definition of Success at a Horse Rescue 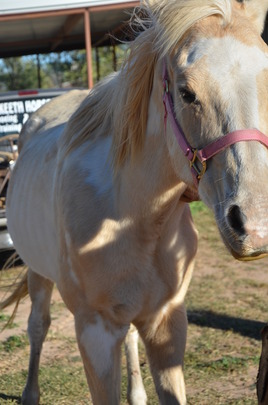 At Easy R Equine Rescue, we get horses for various reasons, but our goal for each one of them is to provide all needed rehabilitation services and rehome into a loving forever home.  We would consider ourselves "successful" if we accomplish that with every horse.  But what if we don't? Have we failed? What about Gracie?

Gracie was brought to Easy R near the end of the summer in 2014.  Her arrival came after numerous attempts by concerned horse people in our community to convince her previous owner to surrender her.  She was underweight, had scrapes and wounds inflicted on her by other horses, and had a very deformed hoof which created much pain and lameness.  Her name was not Gracie at the time.  But, as with other mistreated or neglected horses, we changed her name.  And also changed the quality of what was to become the last several months of her life.

We knew from the beginning that her hoof was in such poor condition that she might not have a good prognosis for recovery.  But we paid for a farrier to work on her hoof on numerous occasions, provided multiple laser therapy sessions, fed her high quality feed and hay, and watched the life come back into her eyes.  Gracie was with a wonderful, loving foster family from day 1.  They loved Gracie and groomed her, let her graze the green grass around their house, and provided affection and attention on a daily basis.  In January, the staff at Easy R took Gracie to a veterinarian who specializes in equine health and lameness.  The x-rays on her hoof revealed our worst fear for Gracie.  The coffin bone in her hoof was severely damaged; in fact, much of it had demineralized and was gone. (Two photos are attached to this project report which shows a normal coffin bone and Gracie's coffin bone).  After consultation with the vet and knowing in our hearts the right thing to do to prevent the certain, excrutiating pain she would always be in, we made the decision to euthanize Gracie.

Some would consider that failure.  And although we couldn't save Gracie from the negative impact as a result of years of neglect at the hands of her previous owner(s), we still consider her case a success.  Gracie had more love, affection, attention, and quality food and care in her last 6 months of life than she might have ever had.  Certainlyway more than she was getting from her previous owner.  Had we never had the chance to add her to the Easy R herd, she would have wasted away and probably become so lame that she couldn't move.  And would have died there on the property where we have heard that other horses have died as a result of neglect.

Why am I telling you this? The care Gracie received in those 6 months was costly.  The last vet exam, x-rays, and euthanasia was costly.  And we consider every penny spent well worth it in order to provide her that care and ultimate relief from pain.  But we could not do what we do without donors like you who give through Global Giving. We couldn't save more horses like Gracie, even when it means that we have to make a decision to euthanize.  Saving and rehabbing horses is expensive and we cannot say thank you enough to people like you who help make it happen.

On March 18th, Global Giving is offering a 30% match on all donations to our project up to $1000 per donor.  There is $60,000 available in matching funds and matching begins at 9:00:01 EDT and lasts until funds run out or 23:59:59 EDT. So March 18th would be a great day to give to help more horses like Gracie. The key is to donate at the beginning of the day so your gift will be matched at 30% before the available funds run out.   Thank you so much for your past financial gift to our project and for considering to support us once again on March 18th. 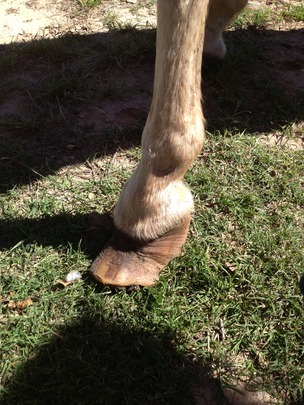 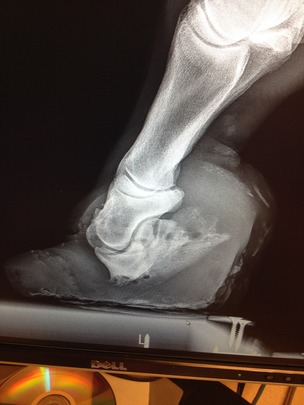 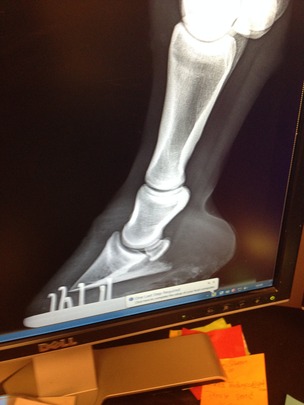