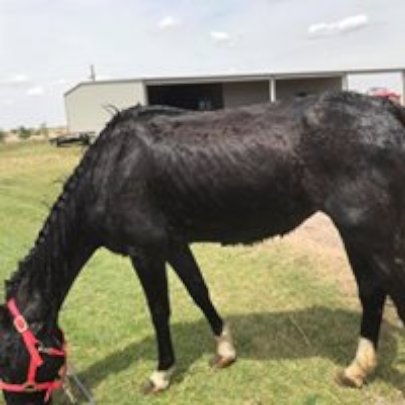 April came to Easy R Equine Rescue last year, not unlike many of the horses we receive--severely underweight and malnourished. She had been seized from a neglectul owner by the local sheriff's department. Her ribs and hip points were protruding and her hair was coarse and dull. Even though she was cooperative, her eyes showed her distrust of humans.  She immediately was placed in one of our wonderful foster homes where she had a nice large stall of her own, an even nicer and larger turn out pasture with lush spring grass, and a buddy horse named Robby.

Robby is a 29 year old horse who belongs to the foster family.  Prior to April being placed at the foster home, Robby had had a pasture mate for years with whom he was very bonded.  But that horse had recently died and left Robby grieving.  April was placed in Robby's pasture and they became fast friends.  Even though the pasture was very large and they had plenty of room to roam, they could always be found side by side, grazing with their noses in the grass.  April's companionship helped Robby get past his grief.  And she quickly put on weight, her hair became soft and glossy, and she gained trust in the humans around her.

Last month, Easy R Equine Rescue held an adoption event where all the adoptable horses were showcased for people to meet.  April was one of the favorites.  One family in particular was extremely interested in adopting April, specifically for a teenage girl who was longing for a horse of her own.  From what we hear and the pictures we receive, they are in love with each other.  Every horse needs the opportunity to be loved by a teenage girl.  And don't worry, we quickly placed another precious mare with Robby. So he is grazing side by side with Jasmine now. 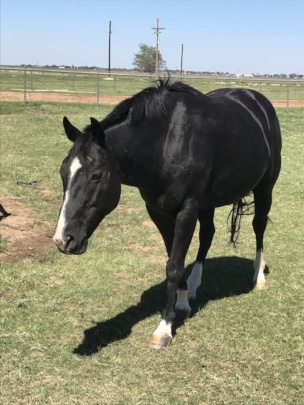 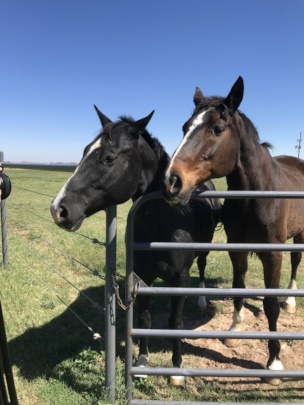 April and Robby, always side by side 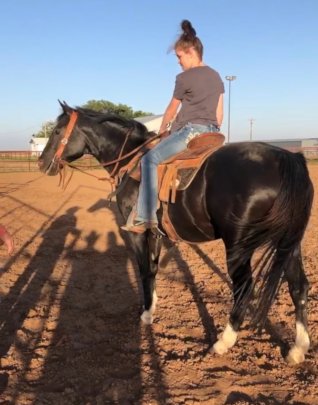 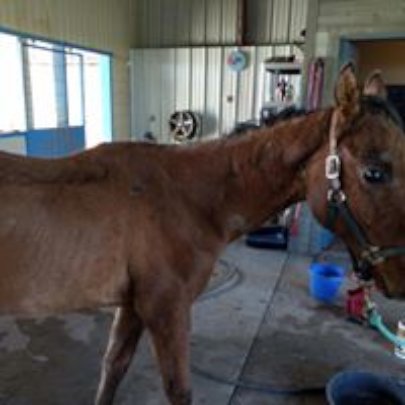 After discarge from the hospital, very thin

In October we received a call from the Sheriff's Department notifying us that an owner agreed to surrender one of her young horses in lieu of having the horse seized.  She, thankfully, realized that she did not have the financial means to take care of the multiple horses on her property.  The one she was surrendering wasn't even 18 months old yet.  He had a small wound on his neck that the owner said was from another horse biting him. According to the deputy the wound was draining and probably getting infected.  We agreed to take in the young horse after he was checked out by a local veterinarian.  The veterinarian recommended that the horse remain at the clinic for a few days for observation.  On the following Monday, the deputy reported to us that the horse was being picked up and was ready for transport to our rescue. He also mentioned that the wound actually looked worse and it had been recommended that the horse be seen by an equine specialist.

When the deputy arrived with the horse, the wound was not only worse, it had been obviously festering an infection in the muscles of his neck and had ruptured an abscess about 5 inches long and at least 2 inches deep.  It was a horrible wound that definitely needed more medical intervention. In addition, the horse had many bite marks on his body and was very thin. He had obviously been beaten up by the older, larger horses and was not getting near enough to eat. In about an hour the staff at Easy R had loaded up the young horse and was headed to an equine specialist about an hour from Lubbock.

This young horse was hospitalized for a week and then sent back to the rescue with instructions to use hydrotherapy on the wound every day in addition to packing it with medication.  It was a nasty, stinky mess!!  (To avoid being too graphic, we didn't attach the very first pictures of the wound). And it needed to heal from the inside out.  So, that's what we did.  The sweet little guy tolerated us running cold water over it every day and, with gloved hands, packing the 2 inch deep wound with healing salve after the hydrotherapy.  He was also provided with plenty of food, water, and TLC.  After a few months of treatment, his wound was completely healed.  He has scarring where the wound closed up, but it only adds to his character.  And he is quite a character.  He loves people and wants to be as close as he can.  After coming back from the hospital, his foster mother took a poll at her workplace on what his new name should be.  So, he became Taco.  And everyone loves tacos, right?! Well, everyone who meets this little Taco sure does.  And he will very soon be ready to go to his forever home.

Thank you for giving so little guys like Taco, who are small, hungry, scared, and beat up, can find a safe place at Easy R where they can heal and get some confidence and courage. 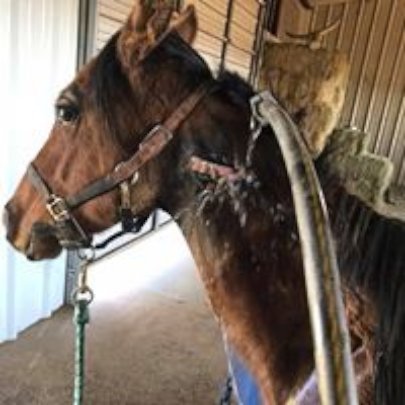 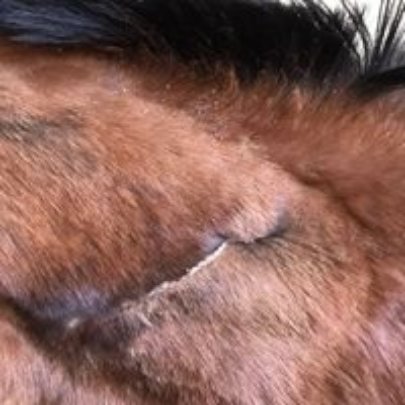 The wound is healing very nicely 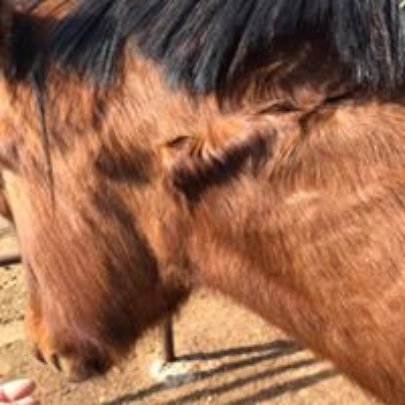 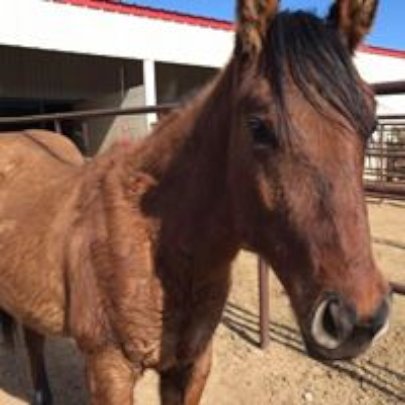 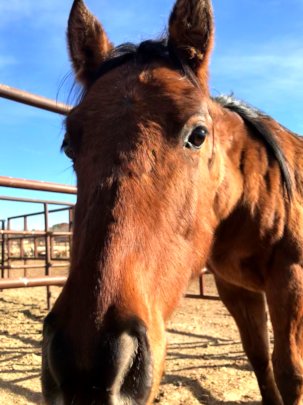 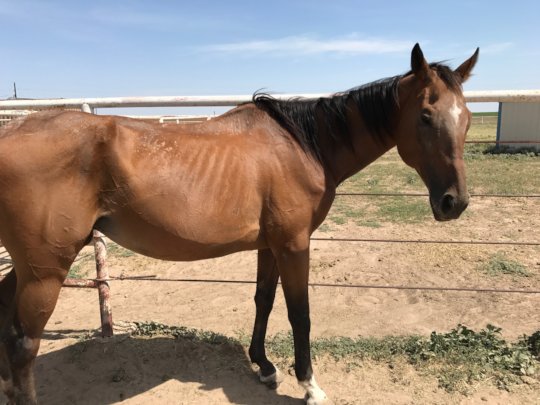 The previous progress report from Easy R Equine Rescue was about Chablis, the extremely emaciated and very ill Thoroughbred mare that came into the rescue in early June.  At the time of the last report we had only had her 3 months and she was already making progress.  We want to take the opportunity to update everyone on her current status and the care she's received since then.

The most vital part of her road to healing has been high quality food. And quite a bit of it.  Generally speaking, Thoroughbreds can be hard keepers and difficult to keep weight on.  So when we get one that is so underweight, the challenge is significantly greater.  Chablis has been on a meal plan that consists of several meals a day of senior grain, a complete alfalfa pellet, and coastal and alfalfa hay.  We are glad to say that as of now, she is considered to be a normal weight--which is a HUGE success in light of the critical condition she was in upon arrival.

She has been worked on by an equine dentist who filed off all the razor sharp edges of her back teeth and ensured that she has enough lateral movement to adequately chew and digest her food.  She also was completely evaluated by an equine veterinarian who confirmed that she had a uterine infection and required a Caslicks procedure.  The procedure was performed and she was put on strong antibiotics to clear up the infection.

In addition, she has been evaluated by a farrier a few times to get her feet in good shape and determine the cause of tenderness and lameness in her front right hoof.  We are hoping the therapeutic shoes on her front feet will help with the soreness, but if she continues to have pain and discomfort we will move to the next step of getting her complete hoof x-rayed to determine the underlying cause of the pain.

Her poor skin condition has been completely resolved, primarily due to the increased function of her immune system as a result of a good, nutritious diet.  She is on daily mineral supplements and probiotics, and anti-inflammatory medications as needed to help with the hoof pain.

Chablis is a very fotunate horse. There were concerned citizens that had the courage to step up and intervene on her behalf.  And she has received nothing but the best at Easy R Equine Rescue.  But the only reason we are able to provide the best for Chablis, and others like her, is because of the generosity of donors who believe in and support what we are doing.  Every single financial gift is important to us--no matter how small.  It isn't so much about the amount as it is about the heart of the giver.  And we are so grateful for generous hearts.  Thank you for being a part of saving and healing Chablis. 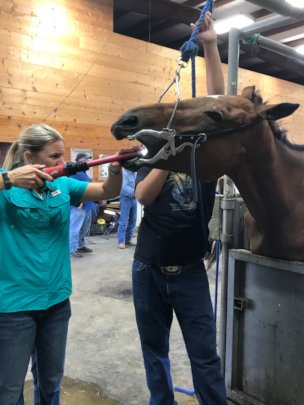 Getting her teeth "floated" 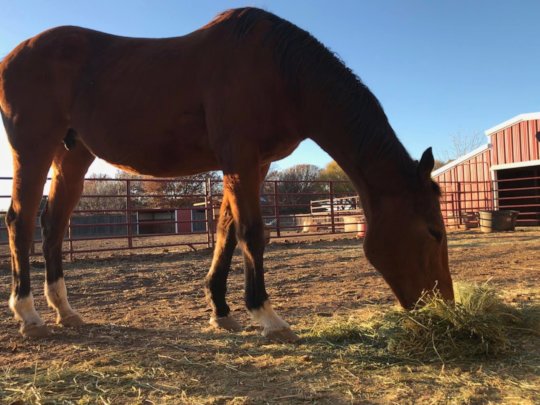 She loves her dinner! 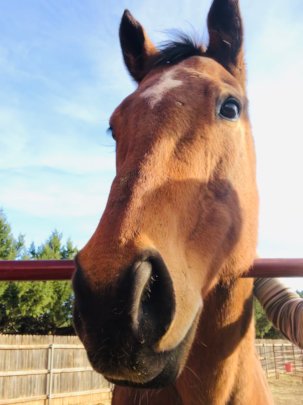