The first quarter of the year 2019 in AGAPE Center 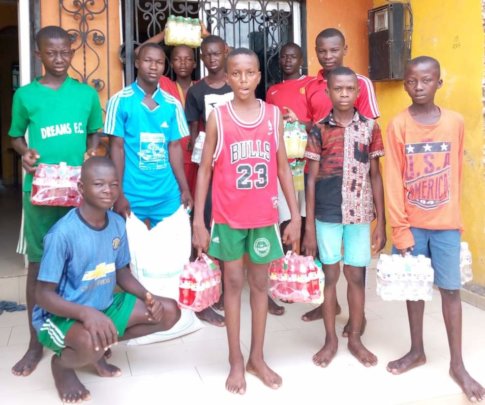 The unwavering support of UCB Company

The year 2019 has peacefully begun at the AGAPE Center. In fact, it began as it ended. In peace, health and good mood. This first quarter of the year at the AGAPE Center was first marked by the renewal of UCB's support, by the donations of Mr. Guy and Mr. Patrick, and by the beginning of Chloe's English lessons. Then began the reading rehearsals, with a view to the preparation of the event of 1 er Juin des écritures théâtrales jeunesse. We had a visit from Nikita, but also the Delivery of equipment for the electrification of the future center by Addax Petroleum Company. This first quarter of the year was finally completed with the visit of the Littoral, Regional Delegate of Social Affairs by the participation of the AGAPE Center at the marché de printemps 2019, by the coordination meeting organized by the Littoral Regional Delegate of Social Affairs and by the second quarter results of youth. We also have Diane Din Ebongue's short film link.

UCB has been with the AGAPE Center since is beginning. Thanks to her, the young people of the center always have a snack after the return of the classes, since with the flour which she gives to the center, one can prepare them tasty donuts. They also have the opportunity to refresh themselves with these drinks that are available to them. The UCB company has therefore resumed its ritual of providing the center with flour and juice for the benefit of the children.

Mr. Guy is a native of Ngangué district, where the AGAPE Center is located. Mr. Guy, on holiday in Cameroon, wished to express his solidarity and support to the children of the center. He made contact with the center through his friends, who then accompanied him for a visit and the delivery of some packages.

The young people and the AGAPE Center have always had the chance to benefit from the services of volunteers, able to provide them English lessons. Chloe is very busy, but makes the effort to the extent possible, to be present for young people.

Last year, comedian artist Mogoun Jeannette, accompanied by the Compagnie les racines, organized this event that has been taking place in France for almost 4 years, and every 1st of June in some countries of the world. Mogoun Jeannette launched the movement in Cameroon, and intends to perpetuate it. She is doing it earlier this year, and the young people from the center who had already participated in the first edition, are still very happy to be able to participate again. It is about giving or giving back the taste of reading to young people and to all those who love reading. But this time, in a theatrical, poetic, satirical tone, through staged and role plays.

Chloe heard about the AGAPE Center, and when she first set foot on it, she was seduced by the project, the kids and the structure. She decided, as far as possible, to give lessons and carry out activities in English with the young people. She does not miss either, to share her experience of the center to those surrounding her, who also, begins to express his interest. As was the case with her husband Alain and her friends Claire, Seyma and Nikita now. Nikita wants to get involved and help as best she can.

The company Addax has expressed its support for the project of the construction of the future AGAPE Center, taking charge of the estimate related to the electrification of the new building. This is how the electrical equipment was made available to the center's managers. And thanks to the help of Mr. Aliyou, friend and fervent defender of the AGAPE cause living near the construction site, we were able to store this material at his home. This so that it is immediately accessible, at the start of the project.

Mr. Patrick is a neighbor of the AGAPE Center. He came to greet the young people and bring them some clothes. They were very happy. Each donator manifests his support in his own way.

In her round, the Littoral Regional Delegate of Social Affairs stopped at AGAPE. It was a very friendly moment of exchange, during which we were able to discuss some problems related to our activity. The Delegate and her audience took note. We received encouragement from her to continue working closely with his services. She also reminded us that we are important partners for the state, through our work.

The marché de printemps is a popular event organized each year by ADFE French World Douala. It is a sharing event with the inhabitants of Douala, inspired by the French garret and the "great spring cleaning". This market facilitates the resale and the purchase of second-hand objects, less expensive and allows all to discover the artists, the craftsmen and the associations which animate the city of Douala. We have proposed some tasty homemade products, such as: plantain chips, foléré/bissap juice, baobab and jam.

The Littoral Regional Delegate of Social Affairs organizes once a semester, coordination meetings. These include the departmentals delegates and districts social affairs, but also the various public and private structures working in the social field. This is to bring the different parties to meet and discuss the multiple topics related to their targets, their difficulties, but especially for the monitoring and evaluation of various resolutions taken at previous meetings. As well as for the updating and to become operative in some procedures.

Just started, it's already the end! Reaching at the end of the second quarter, it is time to do the accounts and to know who is in the right tempo and who is not. This in order to react and save what can be in the last turn, before it is too late. But overall, the results are average. It is status quo for some and improvement for others. Young people have understood the importance of this support and are doing their best.

Although the broadcast continues its course in France, the short film directed by Diane Din Ebongue, with the participation of the young people of the AGAPE Center, the Haoussa students of the association Sabon Kallo and the douala Ndola Christo choir, is already available on You Tube in through the following link: https://youtu.be/XZ2gazenZcQ.
Have a look, and you'll be impressed! 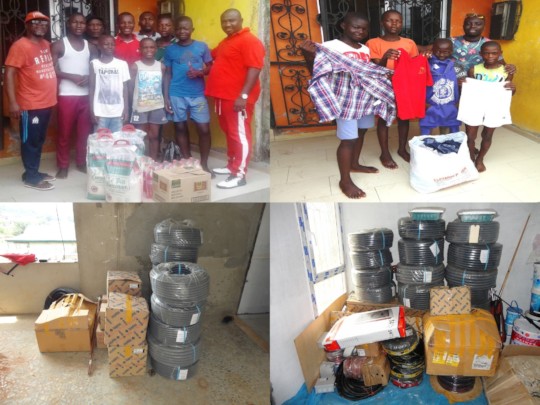 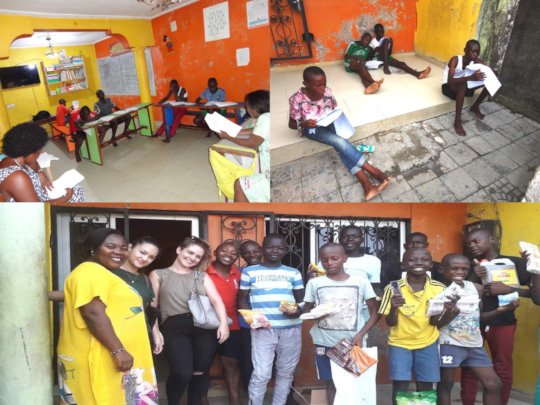 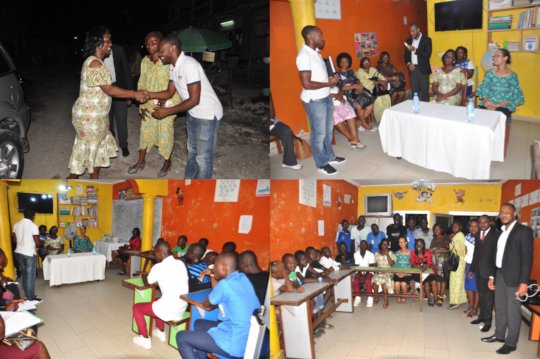 Visit of the Regional Delegate of Social affairs 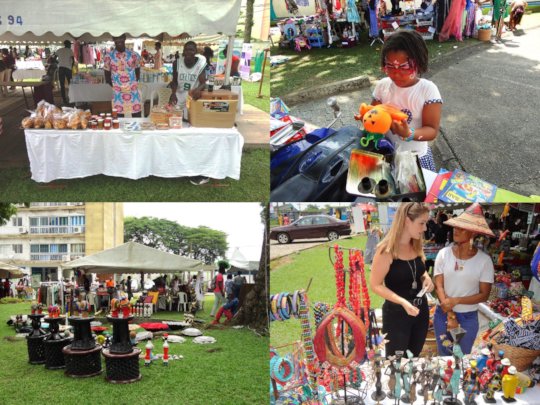 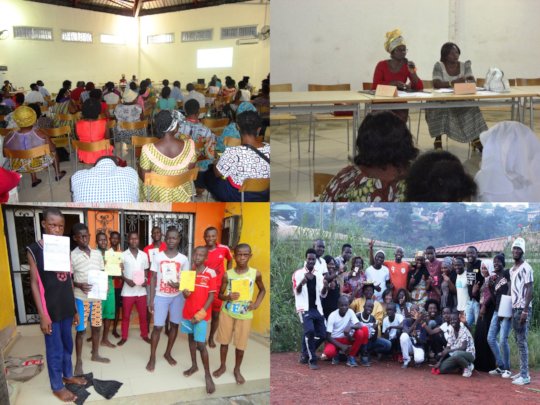 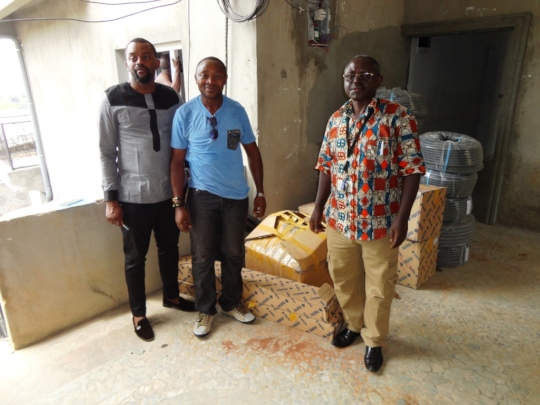 The construction project is delayed because of the building permit, which is difficult for the competent authorities to issue. But that does not matter, the time it takes, is not likely to cool our partners and us. We continue to mobilize energies around this project, in order to obtain the necessary means for its realization. And Addax Petroleum, during the month of March, contacted us to deliver the equipment necessary for the electrical installation of the future AGAPE Center.

And thanks to the help of Mr. Aliyou, friend and fervent defender of the AGAPE cause living near the construction site, we were able to store this material at his home. This so that it is immediately accessible, at the start of the project.

We were also able to meet the Regional Delegate of Social Affairs, with whom we exchanged on the question of the building permit which takes longer than expected to be delivered. She promised to get closer to her hierarchy, to try to see what is wrong so we can find a quick fix and start the job as soon as possible. 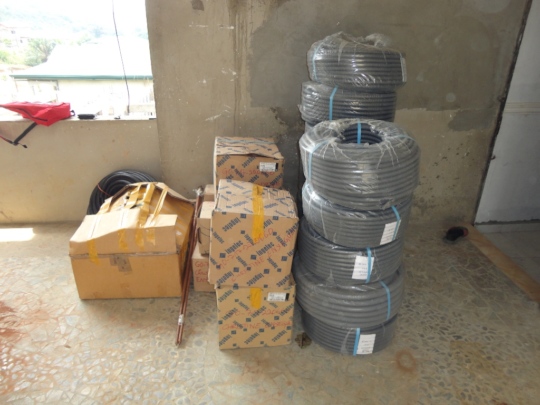 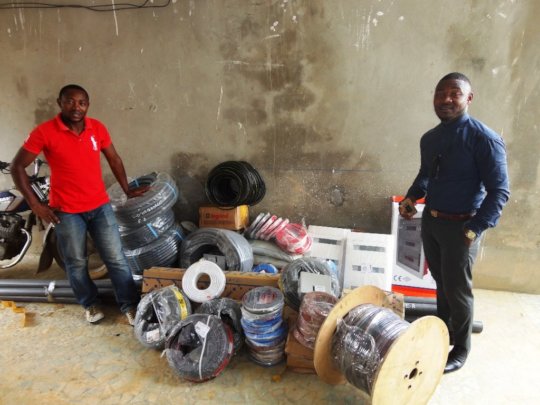 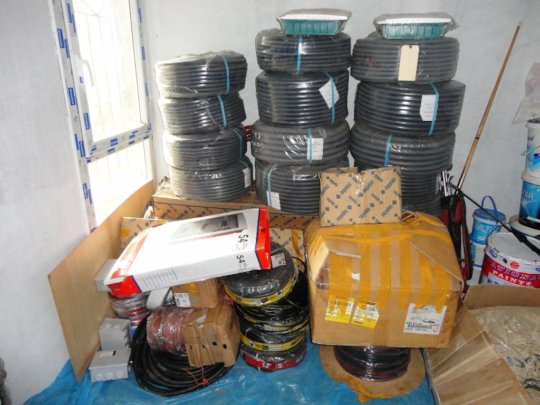 The last quater of the year 2018 in the AGAPE Center

The last quarter of 2018 at the AGAPE Center was marked by the meeting of Chloé, the stay of Daniel, the support of ADDAX PETROLEUM, by the participation of the young people in workshops that can lead to entrepreneurship, by the first quarter results and the Christmas, New Year and New Year celebrations, by the visit and donation of Mr Ravi Kumar of DANGOTE CEMENT CAMEROON Company, but especially by the visit and donation of Christian Bassogog.

Chloe is a young lady who has been living in Cameroon for four years. She is an English teacher. She was looking for a center she could attend and with which she could carry out activities. She heard about AGAPE, and so she decided to visit us with her friends Claire and Seyma.

Daniel, the president of the French association SOLENCA (Solidarité Enfance Cameroun), our main partner, was in Cameroon in November, for a short working stay. And day after day, the construction project of the new AGAPE Center is taking more and more shape. For this purpose, Daniel has come to finalize the last details with the manufacturer and us.

In our quest for funds for the completion of our construction project, we approached many companies, including ADDAX PETROLEUM. The company showed interest in the project, and decided to support in the construction estimate, the amount of the sum reserved for the electrification of the new building. This amounting to 5,000 000 FCFA.

Carine and Sakina are entrepreneurs, who market many items made from natural products. They also run training workshops to encourage and give the necessary weapons to anyone interested in undertaking these various fields. They thought it would be a good idea to involve young people from the AGAPE Center in these workshops. This is how they could discover and learn alongside the other participants.

Barely begun, and here we are already at the end of the first quarter. And that says end of the first quarter, says results. The majority of young people had a fair job, with ratings ranging from 10 to 11/20. But Oliseh continues to stay the course, reproducing the work of her last years in school; it tends above all to improve. He finished first again in his class, with an average of 15/20. It is a satisfying result, which makes us proud of him.

Throughout this 2018 year that has passed, we once again saw the love and generosity expressed by young people at the AGAPE Center. And at the end of it, we received the visit and support of many groups of people, whom we thank from the depths of our hearts.

Christian Basogog was the best player of the CAN 2017 organized in Gabon and won by Cameroon. He grew up in the Ngangué area of New Bell. It is a neighborhood that has seen some of its children succeed in the field of football. Christian Basogog in Ngangué is a symbol and a model. He is always on his way to greet his neighbors, play small soccer tournaments with young people in his neighborhood, but also to provide support to the poor. This is how he became aware of the existence of the AGAPE Center, and that he decided to pay us a visit on Monday, December 24. He came with many provisions and necessities for the sake of the youth of the AGAPE Center. And when he heard about the construction project of the new AGAPE Center, he promised to offer the sum of 5,000,000 CFA francs as his participation in this project. It was a big event throughout the neighborhood and especially for the youth and the center.

On December 24, Mr Ravi promised one million FCFA for the building project of the new AGAPE Center. And 3 days later, he brought an advance of 500,000 FCFA. 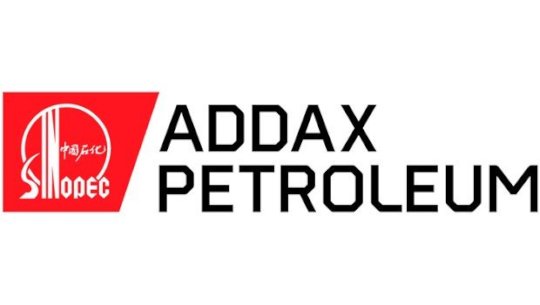 ADDAX PETROLEUM support for the construction 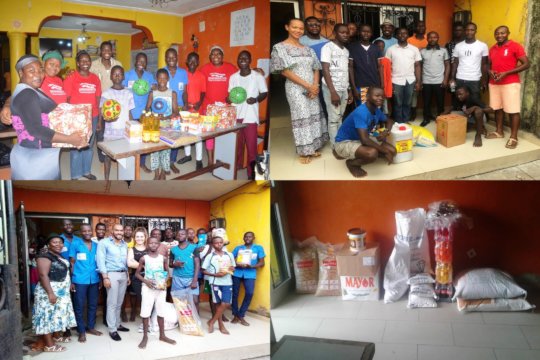 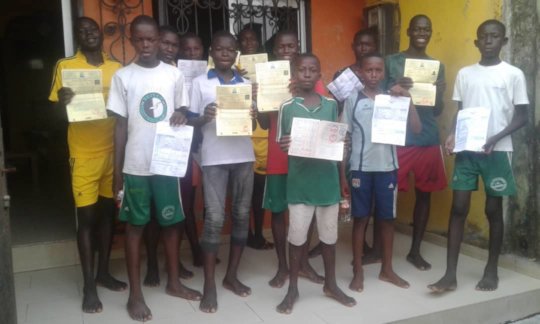 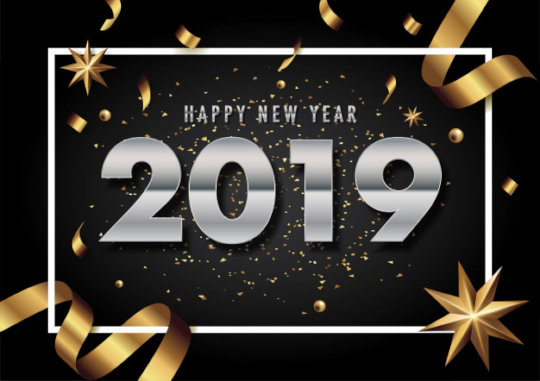 Happy New Year 2019 to the GG staff and donors