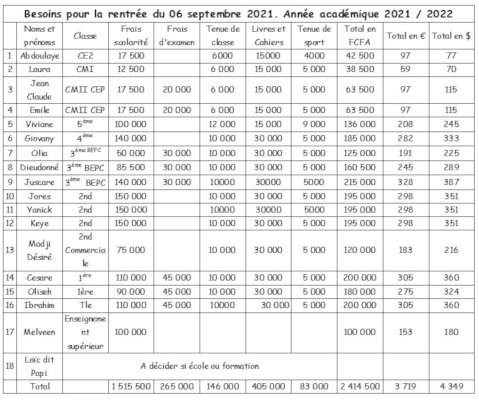 Table of requirements for the start of the school

Academic Year 2020/2020: A successful year thanks to your many supporters.

The AGAPE Center had
-Its 1st bachelier (Melveen, Baccalauréat A4) !!!!!!!!!
-3 children (Jores, Keye, Yanick) passed their BEPC
-1 other young person (Désiré) got his CAP (vocational training certificate) in commercial action
-1 child (Ibrahim) got his Probatoire A4

SPONSORING A CHILD AT CENTER AGAPE, A GIFT THAT CHANGES LIVES!

Since its creation 4 years ago, the school sponsorship program at AGAPE has helped more than 25 vulnerable children to grow up in dignified conditions and to better prepare their future.
The school sponsorship at AGAPE is
An education: providing a normal schooling through the provision of:
- School supplies,
- Classroom clothing
- A sports outfit
- School fees and official exam fees for children in exam classes.
Sponsor all or part of these items. The supervisors invest themselves on a daily basis so that the sponsor is not disappointed at the end of the year for his godchild.

Long-term support towards autonomy
Many young adults from disadvantaged backgrounds want to continue their education or vocational training. Without support, the risk that they will drop out of school prematurely is high given the precariousness in which their families find themselves. Continuing to support them at this crucial stage of their personal development is therefore essential to ensure that they have the keys to autonomy and social integration in hand.

School sponsorship can take two forms:
Individual sponsorship: your contribution is paid in the form of a grant that will cover the Schooling needs of a child. Your solidarity will make a lasting difference to his or her life!
Participatory sponsorship: the AGAPE Center pools the donations of several donors. Together, you multiply your generosity by supporting several children in need.
In the second case, a donor can also in the table of need for the start of the school year 2021/2022, choose to pay for all the expenses intended for the making of class outfits for example.

How to support the AGAPE Center?

5.    -By credit card through the GlobalGiving website: Make a donation 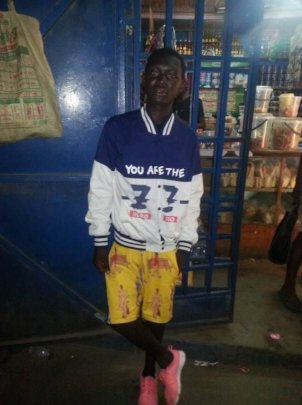 Alexandre before his mortal attack

HELP ME, HELP US. MAY THE DEATH OF ALEXANDRE NOT BE IN VAIN !

No more children's lives lost in the streets. Rest in peace Alexander !

Since 2013 when AGAPE was created I have not written down my personal feelings. Today I am writing, for Alexandre. My heart is heavy, my soul is deeply saddened, I am sad and cannot be silent.

I want to talk to you about Alexandre. When I started AGAPE, he was one of the boys we met. I confess that I don't even remember where I saw him for the first time, but I remember he was thin, tall and slender for his age, I remember him with a green and orange T-shirt slightly ripped, red shorts. He often smiled and dragged his leg to walk due to a previous disability. I remember he couldn't read, he had to pick up the pieces of iron to sell them; but I remember he often had a big smile on his face. I liked this easy boy ...

Tata Ruth, the supervisor, cook of AGAPE reminded me a few months ago that I went with her to meet Alexandre's father who worked in the muddy port of Youpwé. He couldn't take care of Alexander properly. Her mother died a short time ago; so that the boy hung out in the streets very often and with distant relatives.

Apparently one day, the father had returned to the Central African Republic, leaving Alexandre in the streets of Douala. Alexandre was unable to stay at the AGAPE Center despite the efforts made; perhaps I should say, AGAPE did not know how to keep Alexandre. It doesn't matter… it doesn't matter.… The result is the same today for my greatest pain. Alexandre was fascinated by football as Emma, Ruth and I had observed him. He had a target in the viewfinder; go play soccer and become a footballer. Little by little, he stopped coming to the Center, we were absorbed in the functioning of the Center with the cases of all the other children and could not follow him.

I lost his tracks, from time to time he came back to my thoughts, but I forgot him, how we forget their looks and their lives to all these children we meet in the streets ...

A few months ago, Tata Ruth told us at the weekly AGAPE meeting that Alexandre had contacted her. She tried in vain to remind me who he was, but I couldn't see who she was talking about, it's like a veil was covering my face… I don't know why… He was in jail in New Bell for being involved with a group of young people who allegedly committed theft. He was sick, he was hungry. We discussed whether this was our mandate since Alexandre was no longer with us. At the end, we agreed to help him despite a tight budget, we gathered enough to buy him a minimum to be able to sleep, eat a little warm and a supply of gari, peanuts, antibiotic treatment and other drugs prescribed by the prison doctor. Tata Ruth gathered everything with Christian books without text for some because he still could not read. Alexandre was released from prison about two months ago. We promised to follow up with him. We never had the chance, overwhelmed by the kids at the Center, the fundraisers, the fundraising, the move; to name just a part.

We were unable to follow up with Alexandre. Alexandre left the world around August 7, 2021; stabbed, worse than an animal,... in the street for a phone he certainly didn't steal; because the victim of the stolen phone having testified only belatedly that Alexander was not the author of the theft. My heart is so heavy, it's like a big pebble of tears in my heart and I who hardly ever cry have tears in my eyes. Even writing to you I have tears in my eyes. How many Alexandr lost their lives outside ???? STOP !!!!! HELP ME !!!! HELP US !!! PLEASE DON'T FORGET THEM !!!!! NEVER ANY CHILD OR YOUNG OR YOUNG ADULT SHOULD LOSE THEIR LIFE ON THE STREET.

Christophe, one of the kids we didn't keep in the center largely because of his father's refusal, also died in a robbery a few years ago. My message ends with this cry that comes from deep within me for these children:

LET'S STOP BEING INDIFFERENT! GIVE THEM A ROOF, ATTENTION, WARMTH, TO EAT, HELP THEM TO BE EDUCATED, TO HAVE A FUTURE, TO HAVE A DESTINY. HELP !!!! HELP ME ! HELP US HELP THEM SO THAT DEATH OF ALEXANDRE NOT BE IN VAIN  AND FORGOTTEN! May no child ever lose their life on the streets again! 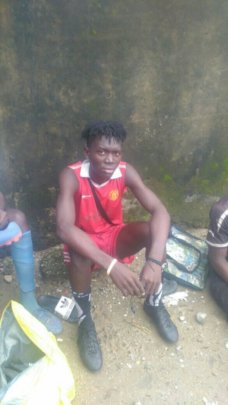 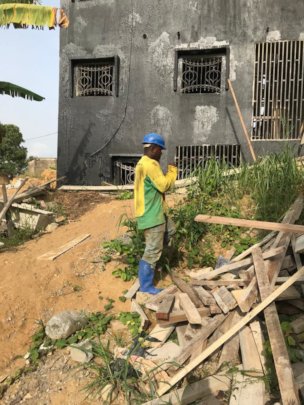 A dowser in search of water

The preparatory work for the paving of the basement is completely done. The trails are laid with a view to leveling the paving. The team is waiting for electricians and plumbers for the passage of pipes and ducts before laying concrete on the ground.

The material for the paving is already available. These are cement, sand and gravel.

Connection work has started on the ground floor. It is more precisely the removal of planks passed through the walls whose purpose was to assemble the scaffolding. Once the boards have been removed, the holes are filled with concrete.

Planning to integrate the Center in Japoma during the school vacation period, we requested the services of a dowser who was to locate an abundant water crossing point, since we are considering the installation of a borehole. 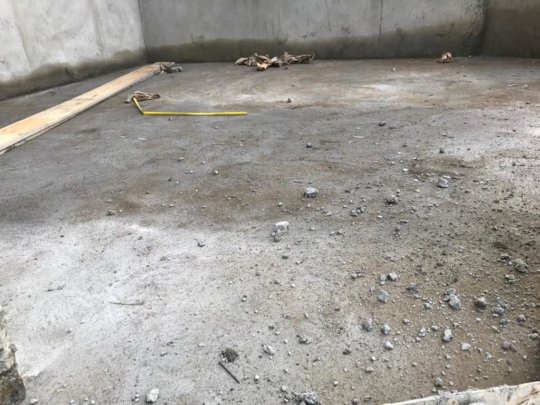 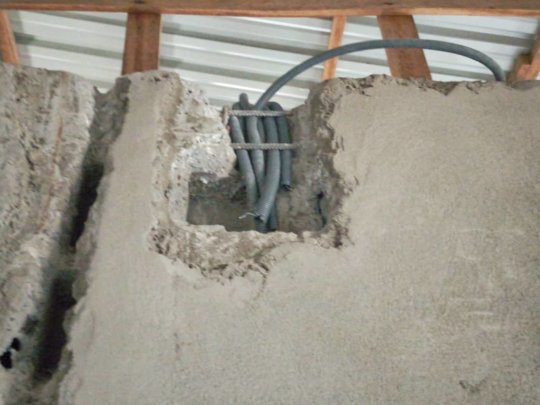 Passage of sheaths for electric cables 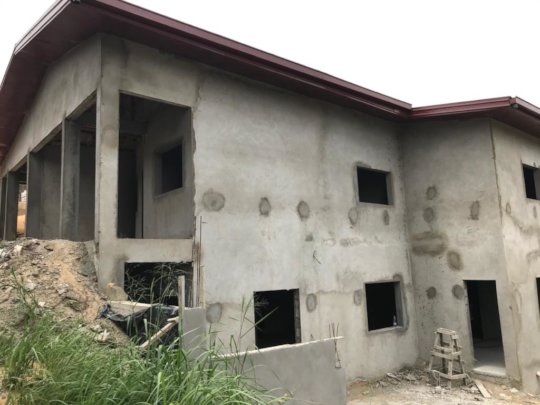 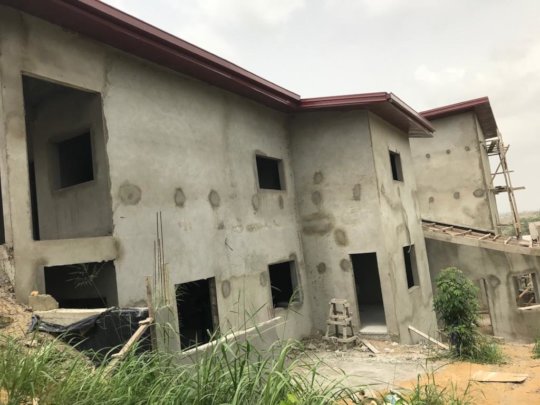 Current level of construction
1 2 3 4 5 6 7 8 9 ... 17 ›
WARNING: Javascript is currently disabled or is not available in your browser. GlobalGiving makes extensive use of Javascript and will not function properly with Javascript disabled. Please enable Javascript and refresh this page.