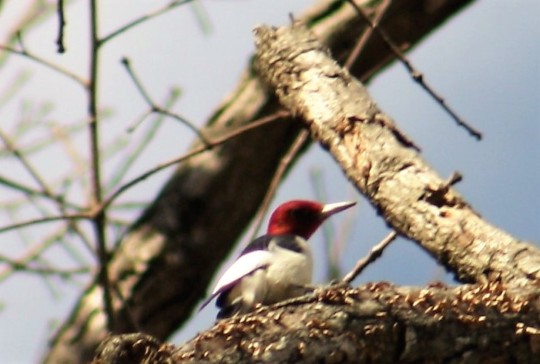 Red-headed woodpecker in the woods at RWS

In wildlife rehabilitation, the "next chapter" of an animal's life is rarely known. Wildlife rehabbers, both staff and volunteers, spend many hours feeding and watering animals, creating a clean environment, watching for markers of growth or recovery -- and finally -- releasing the animal into the wild. Usually, that's the end of the story. Sometimes it can be hard not to know the next chapter in an animal's life.

Fast forward to February 2017. A Red-headed woodpecker was spotted in the woods near the outdoor enclosures. Staff members commented that it seemed unusually comfortable with their movements as they cared for other animals. Soon it was revealed that there was a pair of woodpeckers, choosing to nest in the woods near the enclosures. These birds are wild and free, and could nest anywhere. At RWS like we think that one of the pair was the bird released in 2015, coming back to the place he received a new start in life.

As you can see from the photos the Red-headed woodpecker is a beautiful bird. Once common throughout the eastern U.S., the bird's population is declining. According to Audubon, "Reasons for decline are not well known; probably include loss of potential nest sites (owing to cutting of dead trees), [and] competition with starlings for nest cavities. When swooping out to catch insects in flight, [Red-headed woodpeckers] are often struck by cars along roadsides. 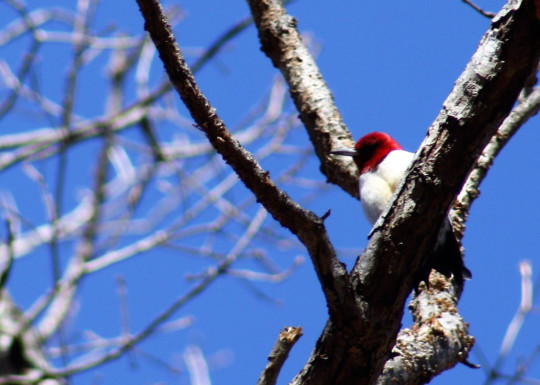 Scouting for a nest cavity. 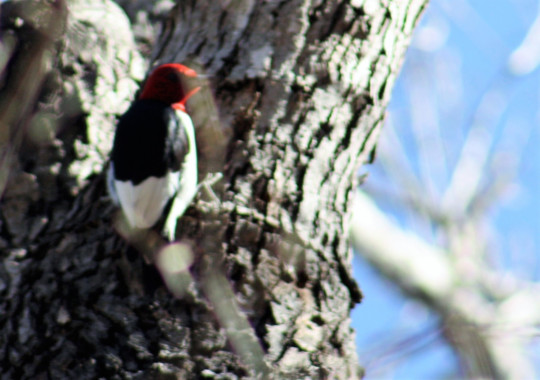 A SEASON AT RWS -- BY THE NUMBERS 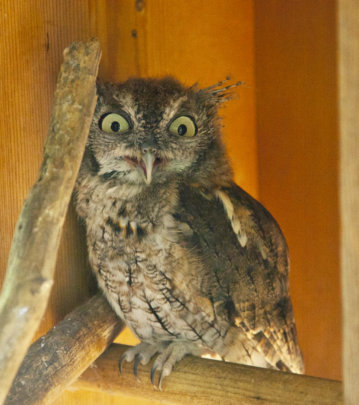 The busy spring and summer season at Rockfish Wildlife Sanctuary is winding down -- here are some numbers that tell the story of our service through the end of September:

11,025  Miles traveled by volunteers bringing animals to the Sanctuary

9  Foxes rehabilitated and released into the wild

28  Major enclosures completed and currently in use at the Sanctuary

Thanks to the GlobalGiving donors who have helped to make our progress possible!

Make Way for Ducklings, Raccoons -- and a Gator! 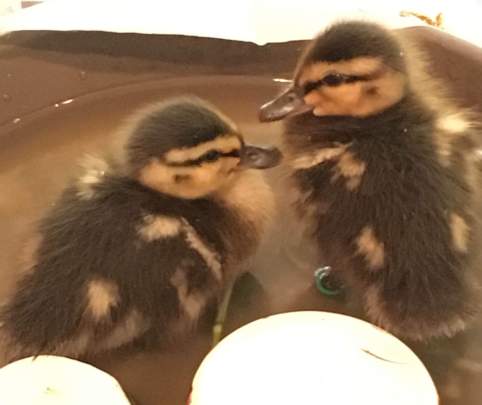 It is an exciting time at Rockfish Wildlife Sanctuary. The spring and summer months are the "busy season," with animals arriving for rehabilitation and being released daily. The drama of the spring and summer is found in meeting the challenge of a large number of baby animals, along with other animals who need rehabilitation due to injury. No two days are alike, as the wildlife rehabilitation staff and volunteers flexibly meet the needs of different species and individual animals as they grow, change and prepare for release.

Here are a few of the current highlights:

DUCKLINGS On a single day in June RWS received 56 ducklings for rehabilitation. They came in a group from a rehabber in Northern Virginia who specializes in ducks, but does not have enclosures large enough to accommodate the waterfowl as they grow. Thankfully, RWS has the large enclosures needed -- complete with a swimming area -- so we were able to take them in. While at RWS, ducklings are given a high quality waterfowl food base, and, depending on the species, are also offered mealworms, as well as lettuce and other greens.

The ducklings in the photo above are Mallards, probably the most well-known species of wild duck, thanks to the adult male's gorgeous iridescent green head and neck. Mallards are common throughout North America. In the wild they prefer to eat aquatic plants, berries, worms, and small fish. Adult Mallards average about two and a half pounds in weight, and are approximately two feet long.

RACCOONS An unusually large number of raccoons have been brought to RWS so far this year. Raccoons are not released until they are 16-24 weeks old, which translates into lots of care from Sanctuary volunteers and staff. Baby raccoons are hand-fed a specialty formula until they are 8-10 weeks old. As with any baby, they are fed multiple times a day. When they are able to effectively feed themselves, they move to a diet of high quality dog food, puppy food, fruits, vegetables, eggs, nuts, and meats. Because of their extended stay at RWS and their high level of intelligence, raccoons are also provided with toys for enrichment, and an environment with opportunities for climbing.

Raccoons are easily identified by their face mask and ringed tail; like the Mallards, they are common throughout most of North America. In the wild, raccoons are omnivores, and are known for their willingness to eat most anything -- including carrion. Their preferred habitat is a heavily wooded area with water access, however, with habitat loss, raccoons are adapting to life in suburban and urban areas. These human-raccoon intersections are contributing to the large number of raccoons needing rehabilitation.

AND A GATOR! Thanks to our supporters, RWS was recently able to acquire a small utility vehicle, or "Gator." This is used to haul water, hay, food and other supplies to the animal enclosures farthermost from the Sanctuary. We are very thankful for this addition, as it makes life easier for our hardworking volunteers and staff. It also increases efficiency, which is important when caring for many animals at one time.

On behalf of the volunteers, staff, and most of all -- the animals -- of Rockfish Wildlife Sanctuary, we send our thanks! 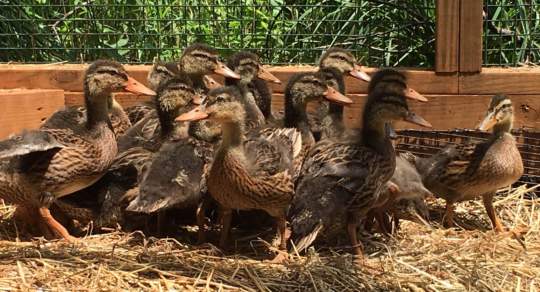 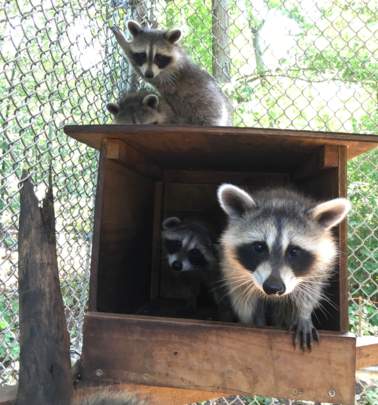 Raccoons in one of their outdoor enclosures at RWS
‹ 1 2 3 4 5 6 7 ›
WARNING: Javascript is currently disabled or is not available in your browser. GlobalGiving makes extensive use of Javascript and will not function properly with Javascript disabled. Please enable Javascript and refresh this page.