No Child Left Behind! 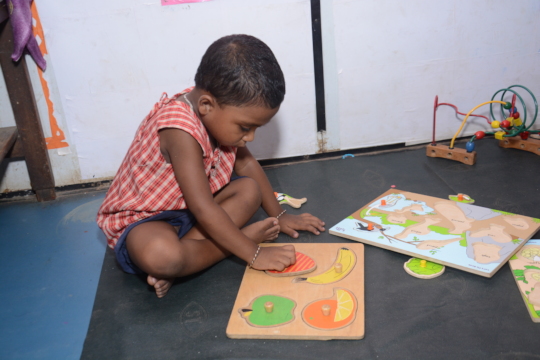 A child's early years are the foundation for his or her future development, providing a strong base for lifelong learning and learning abilities, including cognitive and social development. Families from the lower income group often are unable to provide children with adequate support to ensure timely development of fine and gross motor skills. Some are not even aware of the delay or the age appropriate milestones their children should achieve at a given age.

MMC has long recognised the importance of stimulating educational environment for early childhood learning. Nearly sixty percent of the children living on construction sites we serve are below the age of six years. Over the years we have developed a robust Early Childhood Care and Education programme to meet the needs of children under six. Crèche and preschool teachers engage the children with toys, games, the arts and other sensory activities.

We would like to share story of a child who was behind her peers when he arrived at our centre but improved with specific interventons by pour teachers.

Paras, 2 years old child was a quiet child when he was enrolled into the centre. He would not talk and would just take all the toys and keep them with him. He did not know how to play and would not allow the teachers either to assist him. As time passed he observed children stacking up the building blocks one on top of another and tried hard to do the same. It took him almost a month to put two blocks together. The teacher identified the delay in fine motor skills in Paras and requested his mother to at least buy pull-toys and engage with him at home to further improve his gross and fine motor skills. The mother bought him pull-toys and a car toy to play at home which further aided his development.

Today, after 5 months of continuous intervention at the center, his is able to make 5 storied tower block with ease. Earlier he would not engage with other children. While playing, he now shares the toys with other children at the center and plays along with them. When he joined he could only say single words like ,(Ma) ,(Pa) now he can say 4 word sentences, also he attempts to sing rhymes along with the teacher. His parents are thankful to the teachers. His mom said that she is happy with the attention the teachers’ pay at the children.

We thank our donors for supporting our education programme. If you would like to continue contributing to the programmes of the Mumbai Mobile Creches, you can consider making a monthly recurring donation at the following link: https://www.globalgiving.org/projects/mumbaimobilecreches/ 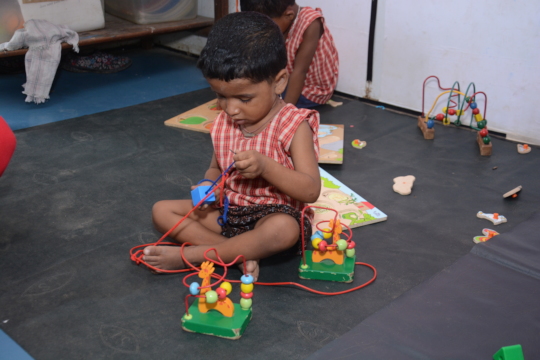 Child at our centre playing with beads stackers! 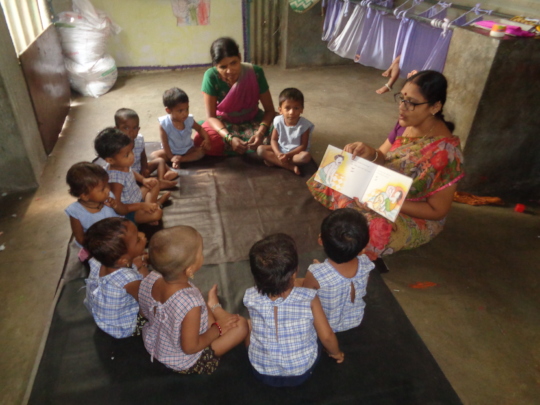 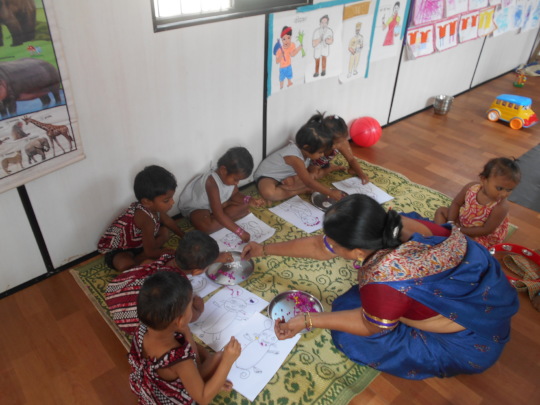 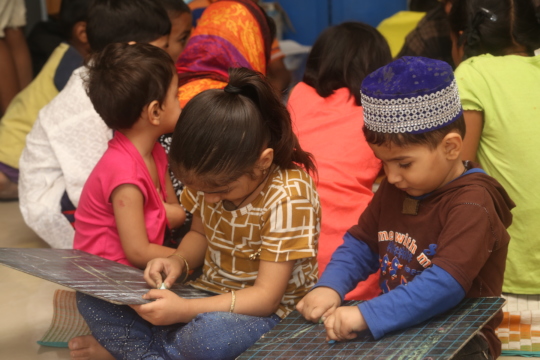 Thank you for your wonderful support to our organisation during the last quarter of this year.

We would like to share a story of one of our Alumni who has overcome challenges and extreme adversities common in the lives of migrant labourers, to forge a stable and successful future for himself. He is an inspiring example of working towards a fulfilling life amidst hardship and deprivation.

The cement and dust in the air quickly formed a thick layer of grime on the pages within minutes after Suraj opened his book to read. Every day, cement obscured the text making it difficult for him to read the words behind the grainy, grey layers of dust; but all this did not faze Suraj's desire to read. At 29, Suraj is a perfect example of hard work, persuasion and strong will. He completed a Master’s in Business Administration (MBA) with specialisation in Human Resource and is currently working in a well-known non-profit organisation. Suraj might have followed the footsteps of his father and become a semi-skilled construction worker but he had other dreams. He is now an inspiration to children and youth from his own community.

Suraj migrated from the Yavatmal district of Maharashtra to Mumbai at the age of 10 along with his family. Suraj’s father found work as a daily wage labourer at a construction site where Mumbai Mobile Creches also happened to be running a day care centre for the children of labourers. Eventually, Suraj’s mother also began working on the same construction site, to add to the family’s income.

Suraj was studying at a school in his native village but after coming to Mumbai there was a gap of a year in his schooling. Suraj was enrolled into MMC’s centre on the site and the teachers in the centre helped him enrol back in a local municipal school. Suraj proudly shares that “Along with good food, we used to get education. I learned the habit of doing things on time at MMC. It helped in my studies also. (After coming to MMC), I have taken education seriously.”

The noisy and dangerous environment of a construction site, the family’s poor financial condition and the sudden death of his father didn’t stop Suraj from pursuing education. At one point, he had to stop his college due a major road accident, but he did not run away from the situation. He continued to study and completed his graduation.

With determination and grit, Suraj has found a way out of these difficulties. He continues his association with us; He is a part of the Alumni group and also helps us to work in the community. 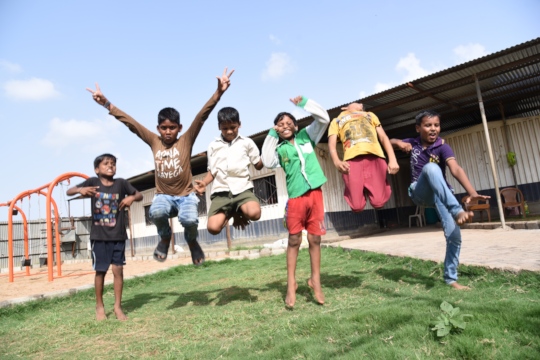 Sky is the limit! 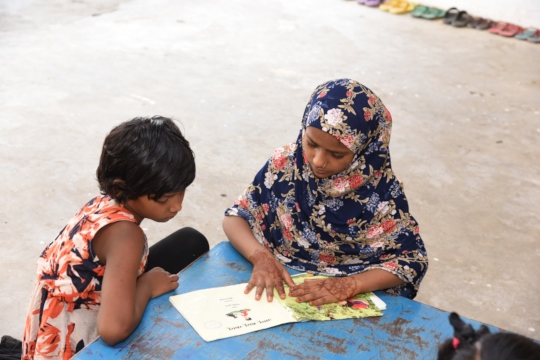 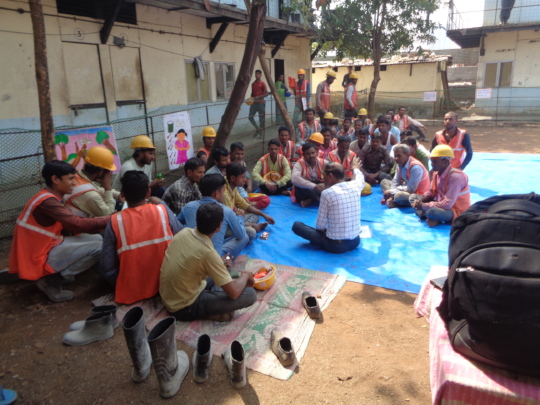 In addition to running a comprehensive day-care centre for children, MMC hosts monthly meetings with parents that focus on different important topics ranging from finance management to hygiene and nutrition. MMC recognises that parents play a pivotal role in the growth and development of children and identifies the community as the central focus for creating awareness and sustainable interventions. The meetings, held over a cup of tea (Chai), provide parents and community members with a platform for open and informal discussions. A specialized MMC Program Officer leads the meetings and facilitates open discussion.

We would like to highlight the efforts and innovative measures taken by our team especially at one of centre Airoli, in Navi Mumbai to increase participation of parents in these meetings.

As parents at the site work during the hours that the centre operates, the centre staffs was finding it very difficult to get parents to attend the meetings. The Parental meetings (chai paani meeting) numbers were extremely low due to the short period of lunch breaks and no leave from the construction site to attend meetings.

To improve the numbers, the centre staff decided to meet the safety officer onsite and made two requests

Similarly in the month of March, 43 male community members attended the community meeting with a total reach of 93 parents.

Due to the cooperation and positive response from both male community members and site office, now we are hoping to pilot only male chai paani meetings across other centers. 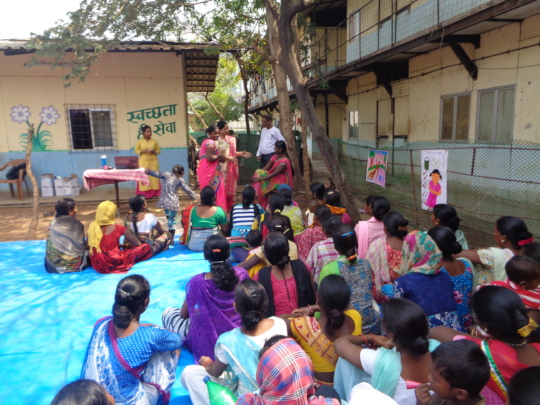 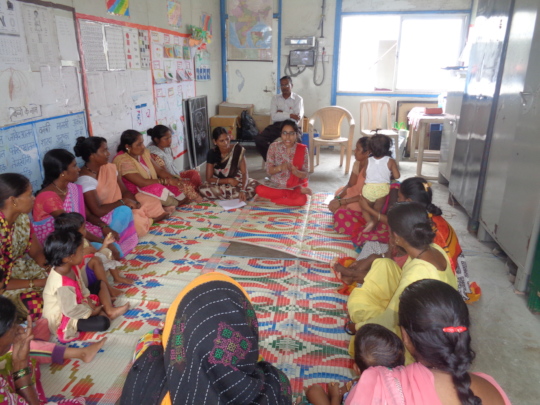 Open discussions are facilitated at chai paani
‹ 1 2 3 4 5 6 7 8 9 10 ›
WARNING: Javascript is currently disabled or is not available in your browser. GlobalGiving makes extensive use of Javascript and will not function properly with Javascript disabled. Please enable Javascript and refresh this page.