In Their Own Words: Diana 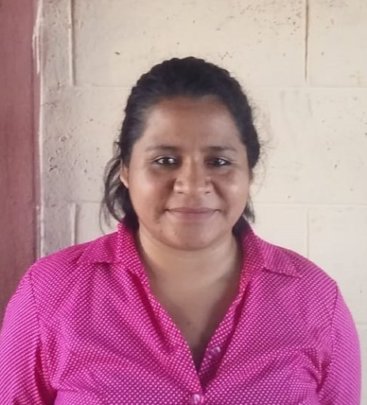 The end of the year is a rewarding time at Pueblo a Pueblo because it is when we take stock of each of our nine projects, analyzing the fruits of our team’s hard work in preparation for another year of collaboration and innovation. Our Water, Sanitation, and Hygiene (WASH) in Schools project is no exception. One of the most important ways we measure our projects’ success is by interviewing community partners to hear, in their own words, the changes a project brought to their lives.

This year, one of the community partners we spoke with was Diana Juarez Azañon, principal at San Juan Mirador Primary School. Here’s what Diana had to say:

Four years ago, before this project, our school had problems related to water because even though we are located at the edge of a river, we did not have access to running water. We also had another even more serious problem: the bathrooms. We only had three bathroom stalls for the whole school and they were in terrible condition. They usually did not flush, the students had to wait in line for a long time in order to use the bathroom, and we only had one sink for students to wash their hands in. It was a difficult situation.

The WASH team at Pueblo a Pueblo became aware of the situation at Diana’s school and conducted a visit. Our team found the conditions Diana described, and they also found a school full of teachers and administrators like Diana: passionate about providing a cleaner, healthier learning environment for their students. Pueblo a Pueblo then worked with Diana and her team of educators to install new toilets, new handwashing stations, and hand soap dispensers—San Juan Mirador's first step toward a healthier school! They also converted an unused bathroom into a classroom, creating a brand new space for student learning. Diana reflected on the results of these efforts:

Before the WASH project, my students’ lives were difficult. They lived in unhygienic conditions because we did not have the resources to provide them a sanitary environment here at school and their families could not provide that at home either since most of our students come from families of few economic resources. The changes in habits that my students have acquired because of this project are many: they now know to use the bathrooms and how to wash their hands; they are now aware of their own health and they take care to avoid getting sick due to poor hygiene. Pueblo a Pueblo’s support means so much to me and to my school because it has equipped us to prevent illnesses among our students by promoting personal hygiene.

Thank you for supporting efforts that keep Diana’s students healthy and happy! Your support fuels our WASH project’s success. 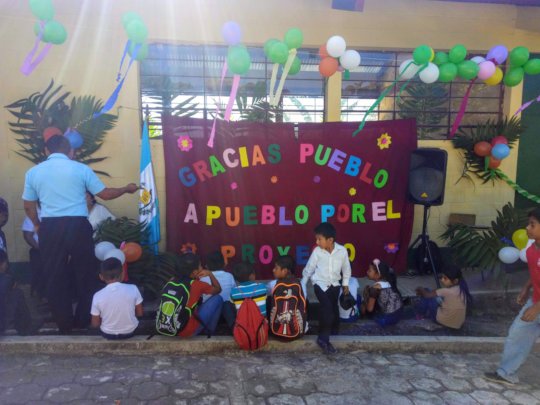 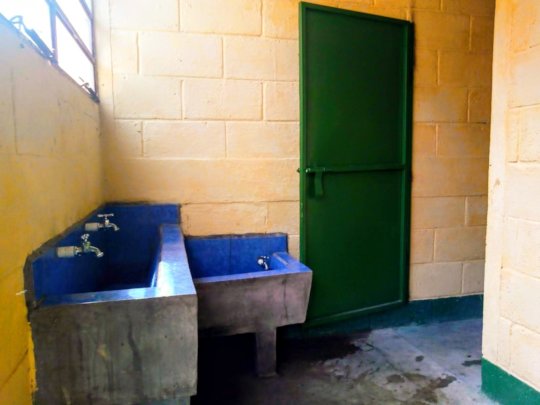 A new bathroom (with handwashing stations) 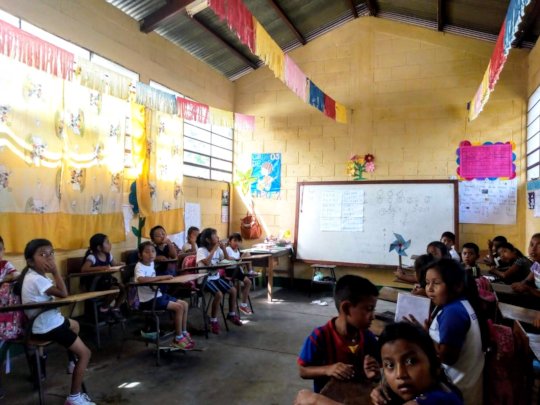 Students in the new classroom 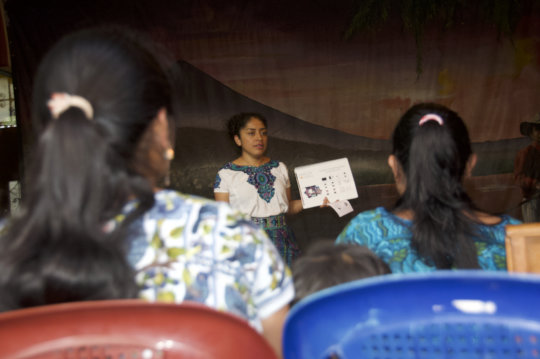 Vilma gives a presentation about menstruation

Every morning for the past week, instead of coming to work at the Pueblo a Pueblo office, Women’s Health Champions project manager Vilma Mendoza has traveled by boat to the other side of Lake Atitlán. She has crossed the lake each day to participate in a training led by Days for Girls, an organization which, like Vilma, advocates for the health and well-being of young women.

During her week at Days for Girls, Vilma received workshops in sewing and business planning as well as a primer in Days for Girls’ own menstruation-centered women’s health curriculum. She is preparing to act as mentor and health advisor to a small business, still in its infancy, which will produce and distribute reusable cloth menstrual pads in and around Santiago Atitlán.

This social enterprise will play a key role in the Women’s Health Champions project: it will supply the pads that participating peer educators, or “Champions”, will distribute to other women in their communities. By selling pads, Champions will make valuable income for themselves at the same time that they promote environmental sustainability and good menstrual hygiene.The pads, which last for at least three years, are an economical alternative to the disposable pads that most women in Santiago Atitlán buy each month, an important option for women who must often find creative ways to meet their own needs in the allocation of scarce familial resources.

Vilma's time with Days for Girls also left her newly inspired to engage girls in conversations about women's health. "Menstruation is not a disease, and it does not have to be debilitating," she notes. "We must speak to young girls to interrupt these harmful beliefs and attitudes before they take root." The Champions will offer girls new knowledge of how to care for their bodies as well as a concrete tool to help them do just that: the pads.

Things are moving into place for the launch of Women’s Health Champions. Vilma has meticulously designed and redesigned the project curriculum. She has started meeting with the leaders of the reusable pad business, facilitating key initial conversations that will steer the group to success. She has even started spreading the word about the product, leading demo sessions and educational presentations related to menstruation. The last step is participation from donors like you—Women’s Health Champions needs funding to get off the ground! Please consider supporting this vital new project today. 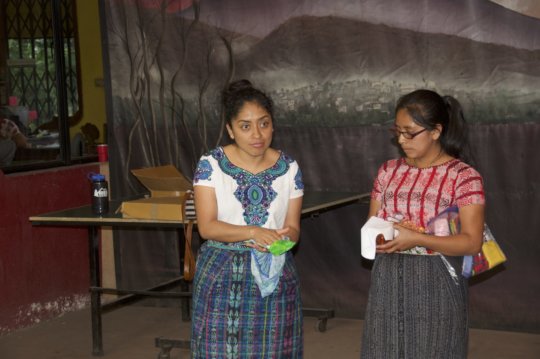 Vilma shows off the pads at a demo session

Keeping Salvador on Track and in School 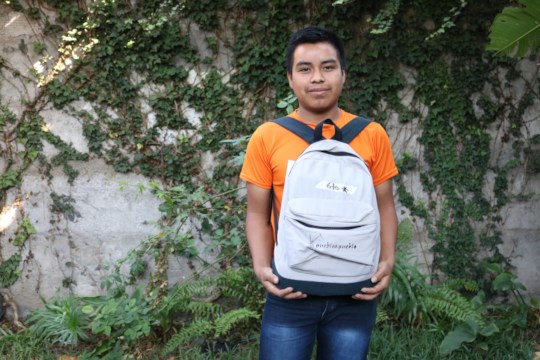 October is an exciting time of year for our Primary Education Scholarships project because with the end of the school year here in Guatemala comes graduation season! This year, eight of our sponsored students will graduate from primary school, two will graduate from middle school, and another two will graduate from high school. Every graduation at any level is a victory in a region where more than three out of ten adults cannot read or write*, and every of these invaluable milestones is made possible by the consistent support our team provides students throughout the school year. All sponsored students receive the financial assistance they need to pay the costs associated with attending public school in Guatemala, costs that are prohibitively high for many families and can force kids to drop out. Some students, however, need a little extra personalized support. For one sponsored student, this meant getting help navigating miscommunications in the classroom.

Salvador Damian is a sixth grader at Chukmuk Primary School. He will graduate from primary school in just a few short weeks, but his graduation wasn’t always a sure thing. In fact, in May of this year he was set on dropping out of school, an all-too-common reality for many young Guatemalans in the Lake Atitlán region. Salvador had been having some problems in class. Although he asked frequently to be allowed to sit up close to the whiteboard, his teacher refused—some of Salvador’s friends also sat up front and the teacher worried that they would become disruptive if allowed to sit together. The sixth grader said that he felt his teacher did not understand him, and a pattern of miscommunication developed between student and teacher. Eventually Salvador, frustrated, announced that he would not return to school, even though he was just months away from his primary school graduation.

Knowing that educational support comes in all forms, our team sprang into action. They visited Salvador and his family in their home. They listened patiently as the sixth grader refused, again and again, to go back to school. They visited his school, where they spoke with his teacher and even his principal. Weeks passed, but our team did not give up.

Finally, our team discovered that Salvador had been struggling with vision problems for quite some time. He had insisted on sitting close to the board—against his teacher’s wishes—because he was not able to see from his seat in the back row. He felt unheard in his classroom and upset at his resulting academic struggles, and by the time May rolled around he had reached his breaking point.

Once Salvador and his family realized what was going on, he was fitted for glasses, and thanks to the efforts of our team he was able to reconcile with his teacher and jump back into his last year of primary school on the right foot. Now Salvador will not only graduate—he will also continue his studies in middle school come next school year, on the condition that the healthcare portion of his sponsorship include regular check-ups with an eye doctor.

Salvador’s case reflects how sometimes a little bit of patience can solve the trickiest problems—even nearsightedness and miscommunication. Because of our team’s efforts, Salvador will stay in school, and from now on he’ll have the glasses he needs to succeed!

‹ 1 ... 9 10 11 12 13 14 15 16 ... 76 ›
WARNING: Javascript is currently disabled or is not available in your browser. GlobalGiving makes extensive use of Javascript and will not function properly with Javascript disabled. Please enable Javascript and refresh this page.