Celebrating Another Year of Education and Advocacy 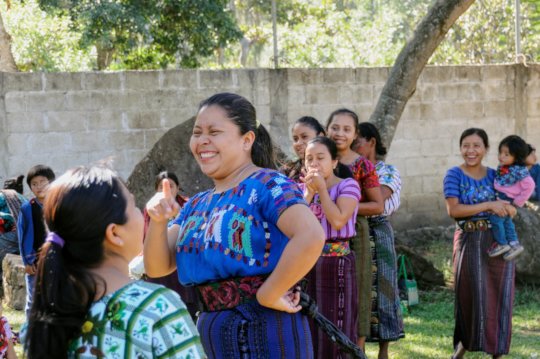 Rebeca leads an activity at the end-of-year party

December means many things for the Maternal Child Health project. In addition to conducting regular home visits and reflecting on a year’s worth of women’s health education and advocacy, Vilma and Rebeca always have one more event on their calendar: the Maternal Child Health end-of-year party! Every year brings participating mothers new challenges as they advocate for their own health and the health of their children, and every year, our team is there to support them. The project provides not only concrete economic resources but also education on topics related to  reproductive health and child development so that mothers have the knowledge they need to make informed decisions about their families’ health. When our team gets together with participating mothers at the end of the year, they have a lot to celebrate!

On December 5th, all but two of the project's 22 participants gathered in a sunny, grassy park, most of them with their infants or toddlers in tow. After Vilma gave some opening remarks, Rebeca led a series of games that quickly got the women smiling and laughing. During one game, Rebeca challenged each team to pass an orange from player to player without using their hands. During another, pairs of women carried water balloons between their foreheads. They played soccer and basketball and relaxed in the grass with their little ones, taking in the sun. On any given day, these women shoulder a lot of responsibility—they care for their children and older relatives, cook and clean for their households, and earn income for their families—but for a few hours on this sunny Wednesday, they simply enjoyed each other’s company.

Lunch was served, and once everyone was relaxing in the shade, Vilma and Rebeca took the opportunity to recognize the participants who showed the greatest dedication to the health workshops given throughout the year—women with near-perfect attendance who brought attention and energy to each training. Two project participants gave presentations on topics relevant to all of the mothers: Concepción spoke about patient empowerment in doctor’s visits, and Lilian spoke about the importance of vaccination. Vilma and Rebeca then distributed Christmas gifts to each participant—a hygiene kit and new Tupperware container for each mother and a pair of shoes for each child.

Finally, shifting everyone's focus to the year ahead, Vilma read out the lists of the new workshop groups. Participants are grouped for health workshops according to the age of their new child, so each year brings the shifting of groups as infants become one-year-olds and three-year-olds turn four. The first workshop of 2019 will take place in just three weeks, on January 29th. Here’s to another year of education and advocacy. Thank you for helping Pueblo a Pueblo provide spaces for mothers and their young children to learn and thrive! 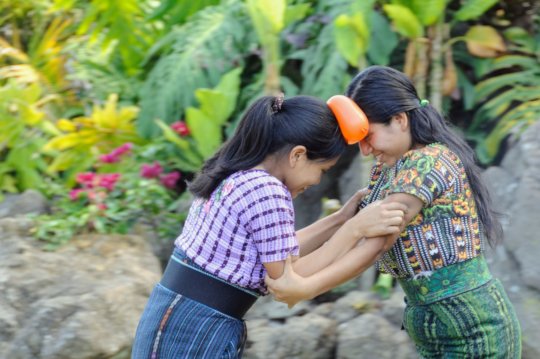 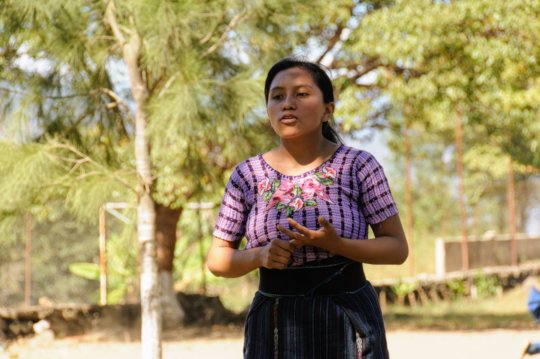 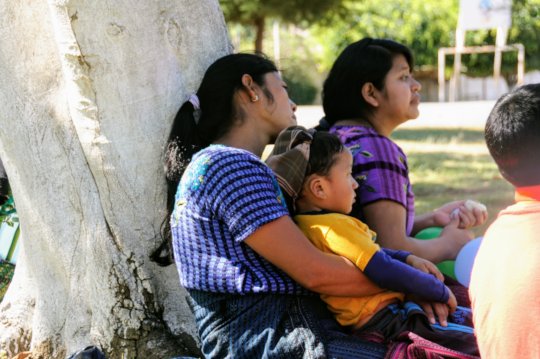 Participating mothers look on with their children 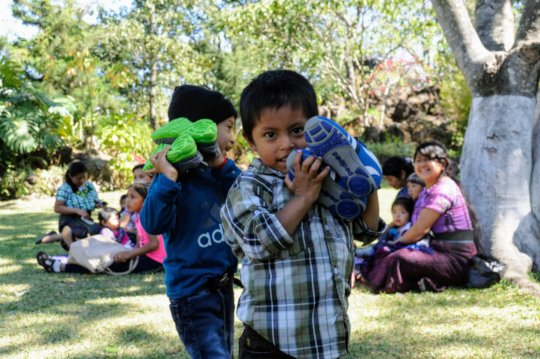 Participants' children with their new shoes

What's New with the Ecological Beekeepers? 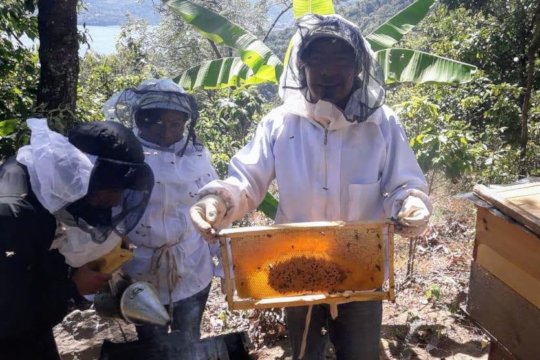 “This is the most cohesive group we’ve partnered with,” says Genaro Simalaj, Pueblo a Pueblo Beekeeping project technician. “They work very well together, they are well-organized, and as a result, their hives are more stable and more successful than we’ve seen from any other partner group at this stage in the project.”

This is high praise coming from Genaro, a seasoned beekeeper himself who has acted as mentor to each of Pueblo a Pueblo’s four Beekeeping partner groups. Genario believes that while the Ecological Beekeepers of San Pablo La Laguna have a ways to go, they are well-positioned to grow into a highly successful collective.

The group, in the first year of its partnership with Pueblo a Pueblo, is likely to succeed because its members are connected in so many ways beyond their work in the apiary. They share mutual interests and activities; many are active in efforts to conserve Lake Atitlán and the local agro-ecological movement to protect indigenous food traditions and native seeds. There are also several midwives in the group who work together on a regular basis. With so much in common, and so much trust already established between group members, the Ecological Beekeepers are building their collective on a rock-solid foundation.

Group members hike up to the apiary every two weeks to check on their hives, refill the bees’ food and water supplies, and clear the area of vegetation. Thanks to the group’s careful efforts, not only are their hives in healthy condition, but they have tripled in size! Since the beekeepers started in September, they have installed two additional levels to each of their hives.

Genaro visited the group in late November to lead a second training, this time on the topic of the bee colony. He opened up the hives and showed the beekeepers-in-training how to identify the different bees that make up each colony: drones, workers, and—of course—the queen. Arriving on the heels of a cold, humid couple of weeks, Genaro imparted some strategies to help bees survive these trying conditions, showing the group how to install plastic sheets in the hives for added insulation.

According to Genaro’s latest estimate, the collective already has at least 150 pounds of honey in its hives! Most beekeepers hope for a first harvest of around 45 pounds, but the Ecological Beekeepers are on track to surpass that goal easily when they harvest later this month. They have the tools and they’re ready to go—Genaro visited again in late December to lead a training on the processing and packaging of honey and drop off the materials they will need to bottle their first harvest.

We can’t wait to see all that the Ecological Beekeepers will continue to achieve as a collective. Here’s to a successful harvest and a 2019 full of even more capacity building and collaboration! 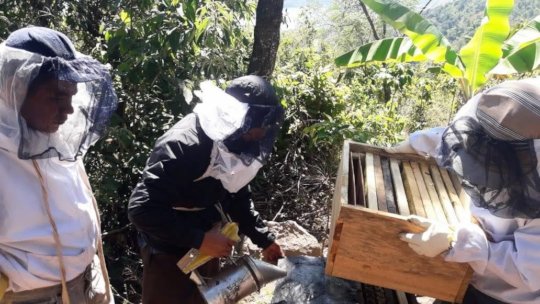 Genaro checks the hives as group members look on 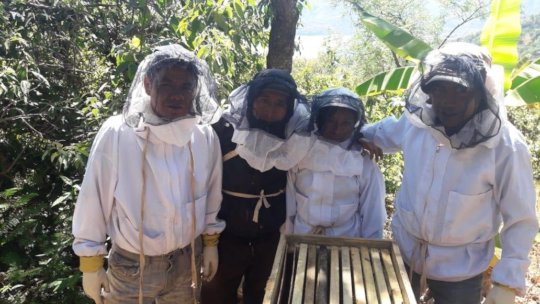 Genaro (in black) with group members at a training

School's Out...But Reading is In! 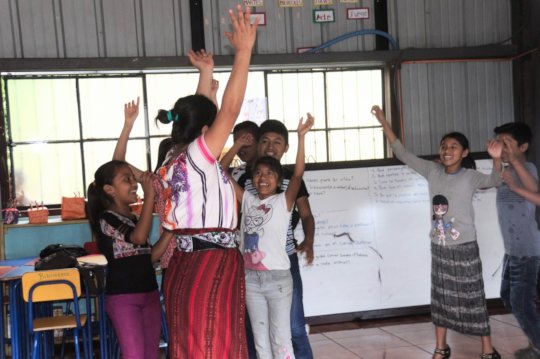 Our Pathways to Literacy team works hard alongside primary school teachers to provide young students with access to school libraries full of good books to read. They also collaborate with teachers to lead activities that help students learn to read and write. But what happens when the school year ends? In Guatemala, school lets out in early October and classes don’t start again until January. That’s more than a two month break from the regular reading practice kids need to keep working toward literacy! Without constant reinforcement of literacy skills, young students tend to lose ground in their learning.

That’s why our team leads vacation literacy programs at each of our active partner schools every winter. This year, Pueblo a Pueblo’s Pathways to Literacy team is leading sessions in Patzilin Abaj and Nueva Providencia. By the end of the last session, the project will have provided two weeks of literacy-oriented activities to fifty children across the two communities.

The first session of this year’s vacation literacy programming began on October 29th. Lidia, Pathways to Literacy Project Manager, arrived at Nueva Providencia Primary School early in the morning and unlocked the door to the library for the first time in weeks. In the mornings, she worked with a group of younger children from first through third grades, and in the afternoon with a group of older kids from fourth through sixth grades. Each day, Lidia focused on a different theme, like stories, games, art, or theatre. “They are literacy classes,” explains Rebeca, Pathways to Literacy Project Consultant, “but they are more fun than the regular classes the students receive during the school year. The vacation sessions are more engaging, more creative, more dynamic for students—we want to give them a chance to unwind a little bit after the long school year.”

This year was particularly exciting one because of a generous gift from a group of visiting volunteers. The group was in Guatemala for a week of volunteering with Pueblo a Pueblo, and they brought a donation of thirty electronic tablets, already loaded with Spanish-language children’s books and carefully-selected educational applications. At Nueva Providencia, Lidia passed out a tablet to each of the students and soon they were all reading the same story about a mischievous monkey, swiping through page by page in unison. Afterwards, Lidia quizzed the students. “What kind of animal was the main character in this book?” she asked. “What was the moral of this story?”

Pueblo a Pueblo’s vacation camp is the only activity of its kind available to young students in Nueva Providencia and Patzilin Abaj. This summer, fifty kids will spend two weeks reading, writing, playing, and laughing—and now they are even more excited to return to school in January to have more fun in the library! Thank you for helping our team inspire a love of reading, writing, and storytelling among young learners. 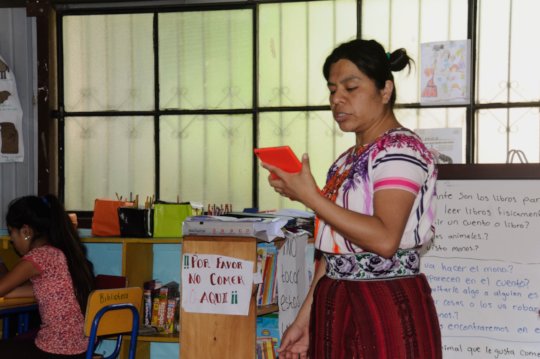 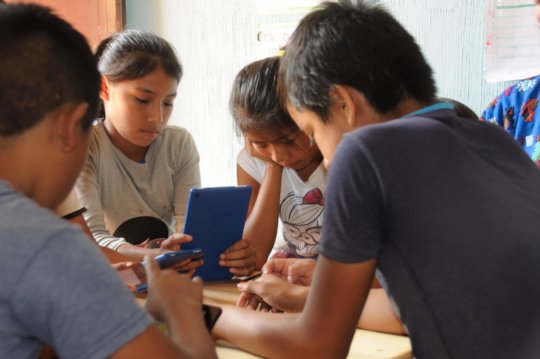 ‹ 1 ... 8 9 10 11 12 13 14 15 ... 76 ›
WARNING: Javascript is currently disabled or is not available in your browser. GlobalGiving makes extensive use of Javascript and will not function properly with Javascript disabled. Please enable Javascript and refresh this page.