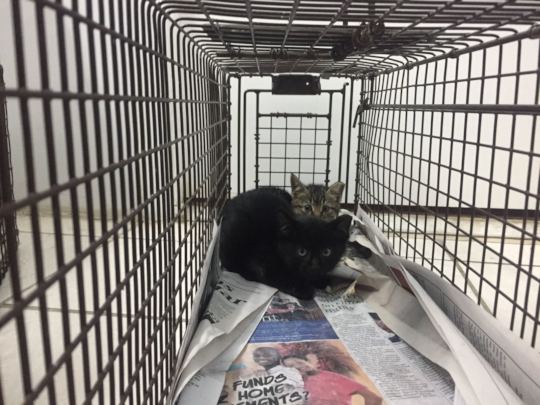 Baark! has had a very busy start to 2018 - we have been doing lots of spay/neuter and TNR.  As the Bahamas is made up of many islands Baark carefully plans how we can help animals both locally (Nassau)  and in the family island clinics. this report we'll tell you about some recent stories of both.

Nassau - Recently, volunteer Aliya stumbled upon 3 small kittens and their mother living on the side of a busy street in a residential area. A few residents had also seen the 6 week old kittens running across the street, a very dangerous situation for the cats.

As it turned out the kittens were living in the gated garbage area of one home but as they got bigger and older, they began to venture closer to the road in front of them, following their mother. The owners of the home had several large dogs in the backyard so the environment was not the best for the small kittens. Michelle and Aliya made a plan to trap the kittens and their mother before any harm could come to them. Luckily, they were able to trap 3 kittens and the mother in one trip. The mother was spayed by a local vet, ear clipped and returned to the area where she was found. Another cat-loving volunteer who lives in the area now regularly feeds the cat and checks on her.

Unlike the mother cat who was more feral, the kittens were young enough to be socialized and adopted so they were not returned to the roadside. Michelle and Aliya had the kittens examined by a vet who was able to give them their first vaccinations and also have them spayed. One of the kittens had an abscess on her paw from a previous injury which was also treated while at the vet. Another kind volunteer, Christopher, agreed to foster the 3 kittens and help socialize them in order to help find them good homes. After about 2 months with lots of love and care, the kittens are now a few months old and just getting settled into their new homes and loving life. You can see from the photos of the kitten in the traps to now living happily in their fur-ever homes - Another happy rescue tale from Baark!

Family Islands  - Baark ! has already been to and conducted spay/neuter clinics on the islands of Long Island, San Salvador and Staniel Cay, Exuma. Each clinic has a lot of planning whereby we send ahead equipment such as traps and crates and some medical equipment , also often our truck which acts as transport.  As these islands do not have a locally based veterinarian we need to arrange to send one (or two) along with techs and volunteers to help with the clinic. We work with local residents on each island to find a suitable building location and advertise the clinic in advance of our arrival.

Long Island resident Jackie headed up her local clinic helping us to complete 35 dogs/cats to be fixed - some people travelled from the opposite end of the island to bring in their pets.

The Staniel Cay Yacht club along with Nassau based volunteer Lissa helped spearhead that clinic.  While we decided some photos were too upsetting to show supporters at this time - one cat was bought into the clinic in a very distressed state.  It has an elastic band stuck around its head and mouth that had embedded into the fur over some time.  Luckily the vets were able to remove it and the cat has now been given a clean bill of health. This is just one of many examples of what we find and how we can help stray animals ! 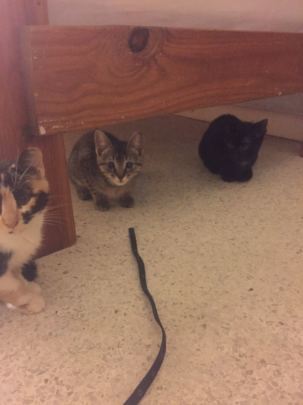 Kittens in foster care being socialized 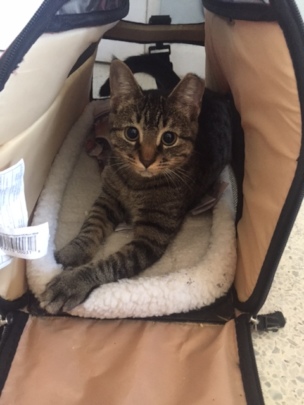 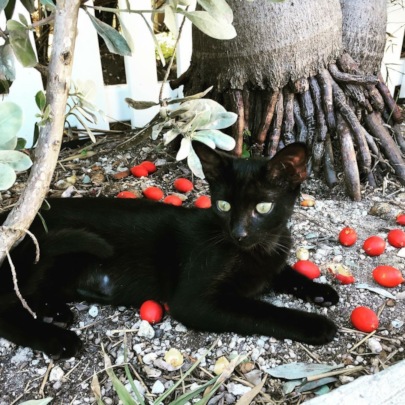 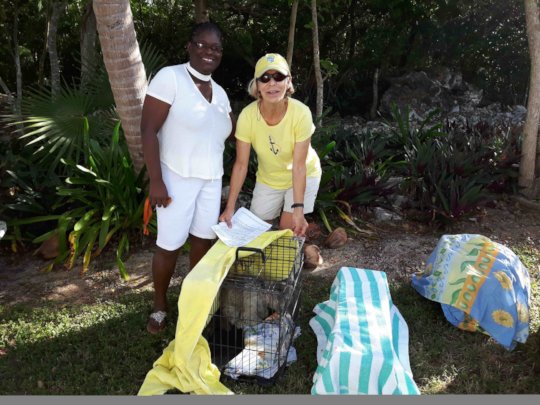 Dynamic Jackie with animals bought into the clinic 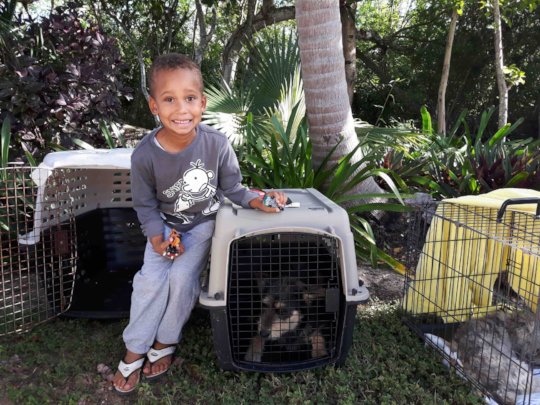 Elijah checking on his dog Lady! 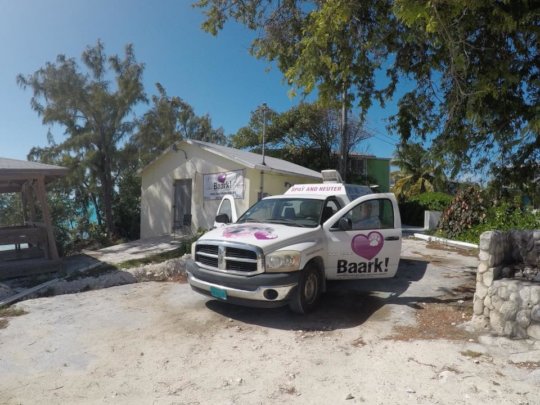 The Baark! van ready for action in Staniel Cay

Our clinic took place on October 28th, 29th and November 5th at the Liquid Courage Warehouse in Palmdale and targeted the community known as Centreville.  We even had support from the Member of Parliament, Reece Chipman, as he understands how much animal welfare benefits everyone in the community. In total, Baark! completed 173 spays and neuters over the course of both weekends. Dogs and cats were trapped by volunteers and transported to the clinic site for surgery. The vet team managed to complete the surgeries along with the assistance of vet techs and volunteers who particularly helped during the recovery and aftercare of all of the animals. Once they were all fully recovered, our volunteers returned them back to where they were found, and the pets were returned to their homes and reunited with their owners.

Meet Lily, the last one to be spayed from this clinic.

But first she has to wait for her little ones to be old enough.

Lily gave birth to these little cuties in the middle of our last clinic. Thankfully our volunteers heard some cries coming from our kitty section, and noticed that she was having her babies right then and there. We moved her somewhere quieter so she could be more comfortable during labour. Now we have these 5 wonderful little kittens who will be adopted! 2 boys and 3 girls.

Baark! is extremely grateful for all the support from the community – both locally and globally.  Thank you for supporting Baark!

Educational Moments in the Community 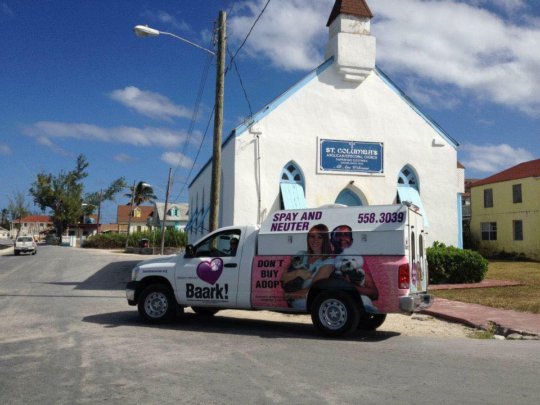 At least 3 days out of a week our main volunteer Lisa is out in communities of Nassau collecting animals for spay, neuter and return.  One of the most beneficial aspects of this is that Lisa interacts directly with members of the community and educates them about responsible animal guardianship.  Baark! believes that education is the only way we will change the future welfare of dogs and cats in The Bahamas.

Two weeks ago, Lisa went to speak to one family about their puppies in a neighbourhood called Elizabeth Estates.  The Baark! truck and all its markings always attracts attention which is a huge bonus for our cause.  Once they spotted the Baark! truck at a house, several guys who own and breed pitbulls came up and started talking to Lisa.

They wanted Lisa to provide vacinnes and explained to her the health issues that their pitbulls were having.  Lisa explained to them that Baark! does not support breeding.  We assist with spay and neuter because it is really important for the health of pets and we will provide vacinnations if their pet is spayed or neutered through Baark!

Lisa spent over an hour talking to a group of young men in the neighbourhood about diseases dogs can contract when used for breeding purposes.  After explaining, the young men agreed that they cared about the health of their dogs and did not want them to get sick and die because of breeding.  She left with 15 dogs to be spayed and neutered from the community that would have been used for breeding.

Baark! believes that spaying 1 dog or cat at a time, and educating 1 person at a time will eventually transform our country and the way we take care of animals.

Your kind gifts go directly towards spay and neuter which in turn prevents suffering. 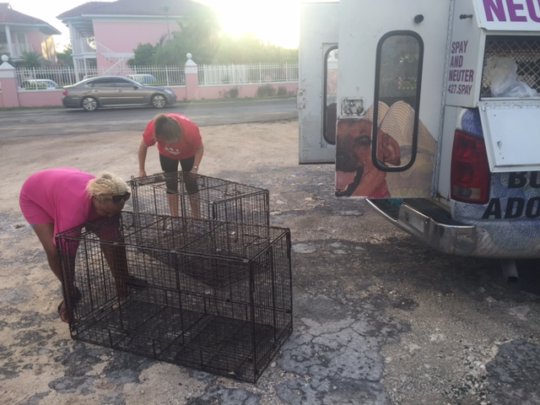 Lisa and Michelle setting up dog traps
‹ 1 2 3 4 5 6 7 8 9 ... 11 ›
WARNING: Javascript is currently disabled or is not available in your browser. GlobalGiving makes extensive use of Javascript and will not function properly with Javascript disabled. Please enable Javascript and refresh this page.