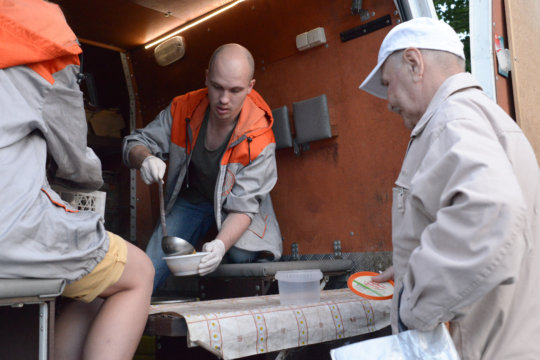 Dear friends!
We are happy to share our most important news with you. And thank you on behalf of our clients!

Nochlezhka has published its annual report for 2015

We spent a lot of time on making a detailed and impressive report of our work over the past year. Firstly, to tell you how we spent the money donated to Nochlezhka and how many people we managed to help. Secondly, to have the results of an entire year of work presented in this compact and concentrated way, so that one could see straight away what we do and why we need support.

A deaf man called Melik with an Armenian passport came to Nochlezhka's counselling service. He struggled to read in Russian and could not write. The man really wanted to get back home, to Yerevan.

We managed to find his sister on Skype and get in touch with her. Then we found an Armenian company in St. Petersburg: it turned out that there are minibuses going from St. Petersburg to Yerevan once a week, on Saturdays.

Our social worker arranged with Melik's sister that she would pay for his ticket in Yerevan and let us know on the following Friday. At that time we had no vacancies in our shelter so we had to say goodbye to Melik until Friday.

On the agreed day, before the departure of the bus (his sister had managed to find enough money and pay the fare for her brother) the man caused a bit of a panic: he was an hour late and arrived with a lot of bruises. Our social worker drew a map for Melik to show him where the minibus was leaving from. The man managed to get there, explain the situation to the driver and on Saturday he set off to Armenia. And on Sunday evening he was already at home!

Nochlezhka's role in this story was minimal but where else in St. Petersburg could a deaf person who could barely speak any Russian find this minimal help? At the same time it's quite obvious that he would find surviving on the streets extremely difficult.

Denis' story (name is changed)
Denis had been coming to Nochlezhka for help for several months: we gave him metro tickets, a mobile phone to look for a job, consulted him on how to get his papers re-issued. Denis was determined to find and job and he walked a lot not to use the metro tickets we'd given him for nothing. Eventually he found a job at a hypermarket and slept in the utility room to begin with.

Not so long ago the young man came to our counselling service and asked us to count how many tickets he had taken from us over the time we were helping him (our employees have a special digital database and keep records of all the aid we provide - it helps us track the progress of helping a particular person and also to prepare statistics for our reports). It turned out it was only 10 of them.

The following day Denis came to our counselling service again and brought ten metro tickets and the very mobile phone he had got from us. The young man asked us to give it all to the "deserving people". He said he could now pay his own travel expenses and that he had bought a new phone.

Results of our work over May — August

2. 947 people were fed, volunteers of the organization handed out 5917 portions of hot meal.

3. 125 people lived in our rehabilitation Shelter.

On 19 May Nochlezhka's experts organised a seminar for their colleagues where they spoke about obtaining housing for homeless people. There were 24 participants from state and non-governmental organisations of St. Petersburg and Leningrad Region. We believe that such dialogues between officials and non-governmental organisations are helpful in creating a govermental system of prevention of homelessness. 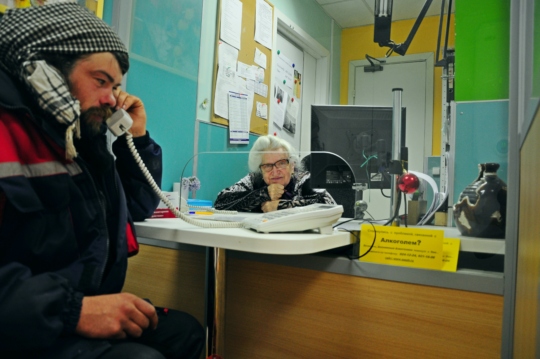 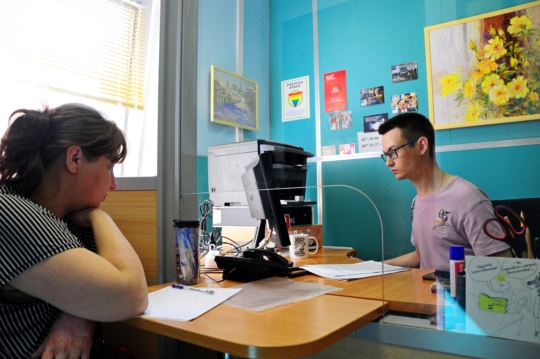 Some stories from our beneficiaries 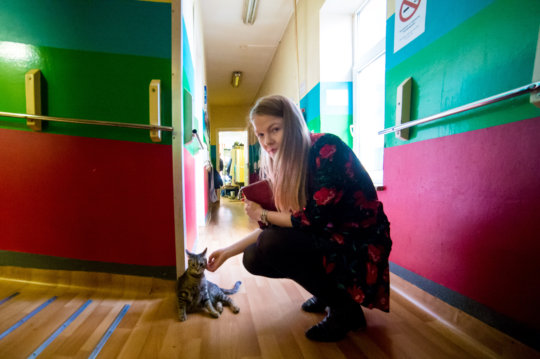 a cat and a volunteer in our the Shelter

We want to share some stories from homeless people, whom we were able to help. We find these stories very inspiring! Thank you on behalf of our clients for your support.

For a few months Nochlezhka’s shelter was a home to Slava, who had been brought up in an orphanage and who had lost his flat as a result of a fraud. With the help of his social worker, Lena Kondrakhina, the young man managed to get his papers re-issued and started working with the Raul Foundation which helps people from orphanages and special needs schools. Over the course of two months Slava did an internship in a large energy company and in February he was officially employed there.

Slava took part in the video we made where people living in our shelter were reading comments posted online about the homeless. Having seen him in this video, a girl from Moscow wanted to help him and offered to pay for his travel card to cover the cost of his commute for a year. This was a generous and a very timely offer, since Nochlezhka cannot pay its clients travel expenses and this expenditure is unavoidable and takes a significant share of one’s wages.

His social worker Lena also contacted a social hostel for minors and managed to arrange a room for Slava there despite him being older than 18. The young man had not been quite comfortable in our shelter with dormitories for 10 people, where most people were a lot older than him. Meanwhile, Nochlezhka’s experts continue to fight for his rights and have contested the fraud transaction involving his flat.

This sad story ended well, even with a hint of magic. It’s frightening to think, though, what would have happened if there was no such place as Nochlezhka in St. Petersburg.

The man was suffering from memory loss and had no papers. He could only remember his name, his date of birth and that he was from Gomel (Ukraine) and, perhaps, had come to St. Petersburg to find a job. Alexey could not remember what happened next. Most likely, the man got serious injuries, maybe a concussion.

While Alexey was being examined at the first aid unit for homeless people at the Botkin Hospital, our social worker Kira Podlipaeva called the Housing Authority in charge of the district of Gomel where Alexey thought he was from. Kira sent a few more emails to various institutions asking them to help find Alexey’s relatives, contact them and find out whether there was indeed someone under that name registered at the address given by Alexey.

It’s hard to believe but late in the evening of the same day, Kira got a call from the Housing Authority from Gomel! They had found Alexey’s mother (the address turned out to be right!), gave her Nochlezhka’s contact details and were willing to provide more help if needed.

Kira gave Alexey’s mother a call, and the woman was ready to get on the train to come and take her son the following day. It turned out that Alexey had left home to find a job earlier in the autumn and his mother hadn’t heard from him for a while. Kira contacted the attendant at our heated tent in Obukhovo to pass the happy news to Alexey and ask him not to go anywhere, so that he wouldn’t miss his mum’s arrival.

Kira gave the woman detailed directions to the tent where her son was waiting for her. And during the first days of the new year the meeting took place and Alexey went back home to Gomel with his mother.

This video got over 40,000 views. It shows how easy it is to write really nasty and cruel things about some abstract homeless people, an unknown human mass, and how different it is to actually see the eyes of particular people who have found themselves in trouble. This is another attempt to show the society that there is no ‘us’ and ‘them’. There are only people. 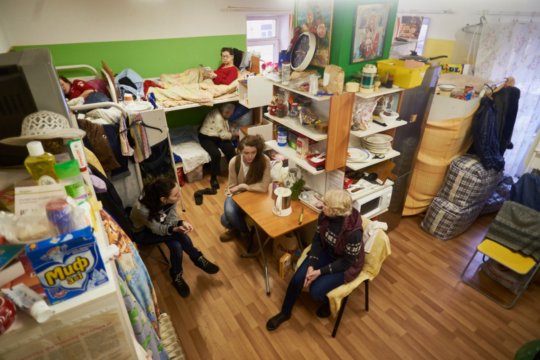 a women's room in the Shelter 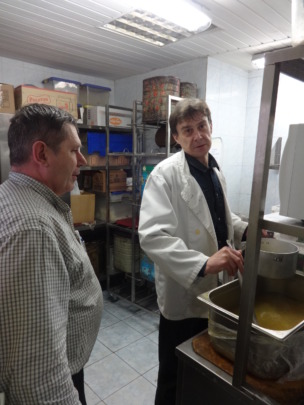 Some news news from Nochlezhka over September-November 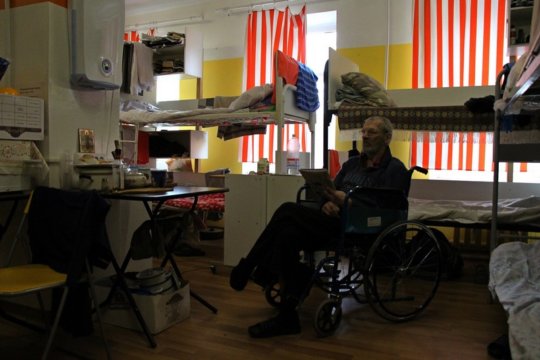 We are happy to share our resuts of Septermer-November with you. And thank you on behalf of our clients!

One of our storiesVictor came to us to ask for help. Like many people released from prison, he had nowhere to go once he was free. Before release, many inmates are advised by the prison authorities to go straight to Nochlezhka, a charity, after arriving in Saint-Petersburg (just a little remark on the subject of rehabilitation for ex-convicts) The man was thinking of going to Karelia, to a monastery where they were willing to accept him as a monk. He had no money for a ticket though. He had nowhere to live either, so while looking for a job he would have had to sleep rough. Nochlezhka contacted a friendly association called Bilet Domoi ('Ticket Home') which bought the man a ticket, and he managed to get to the monastery. Our social workers say that they did not play much of a role in this story. As little as 770 roubles (the cost of the ticket) was enough to save a man from the street which every day gets harder and harder to get away from. We wanted to share this story with you because it demonstrates how having somewhere to go for help can prevent homelessness.

Results of Nochlezhka’s rehabilitation shelter in 112B, Borovaya street In September, October and November our shelter accommodated 168 people, who received full support from our social workers, lawyers and therapists.

The results of the Counselling Service In September, October and November social counselling was provided to 1247 people and legal advice to 154 people.

The results of the Night Bus project Over September, October and November 1554 people used its services with varying regularity and the volunteers gave out 10,355 hot meals.

Thank you for your support and interest in our projects!With our heartfelt gratitude, Nochlezhka Team 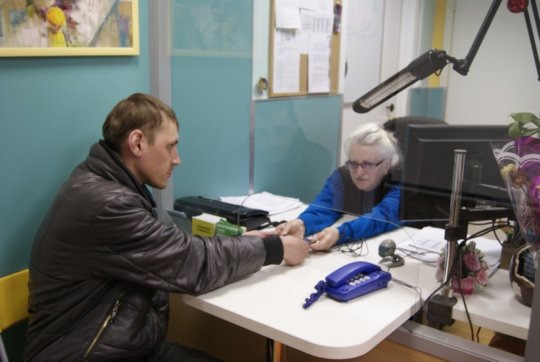 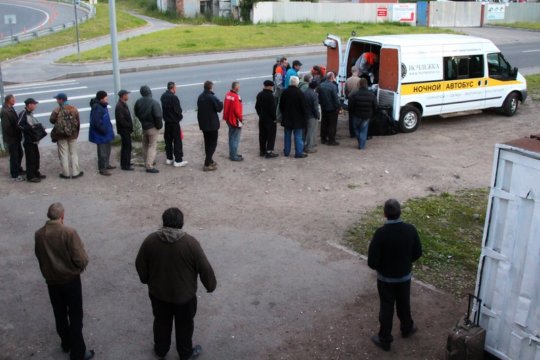 the Night Bus
‹ 1 2 3 4 5 6 7 8 9 ›
WARNING: Javascript is currently disabled or is not available in your browser. GlobalGiving makes extensive use of Javascript and will not function properly with Javascript disabled. Please enable Javascript and refresh this page.