PLAY4PURPOSE Leagues Taking off in 4 neighborhoods

By Justin Forzano - Founder and CEO 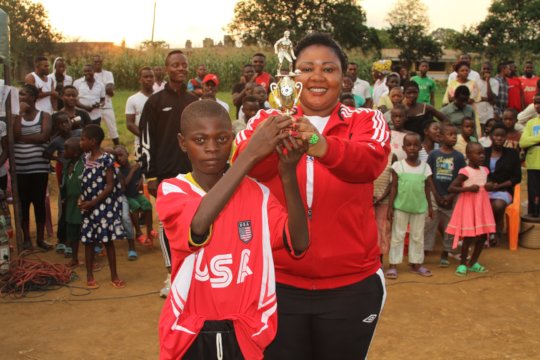 Champions of their neighborhood educational league

In November 2016, civil unrest began in the English-speaking regions of Cameroon, where we’ve worked for the past 8 years. The instability in our region has caused a lot of uncertainty and harm both directly and indirectly to our staff, youth, families, and other loved ones. Despite the chaos, CameroonFDP manages to deliver on our mission and provide high-quality sport-based programs to youth in Kumba.  Here is a report on activities related to our project:

We hosted PLAY4PURPOSE league competitions in 4 neighborhoods in Kumba, as planned, and here’s what that looks like:

-          332 youth played through the season, participating in games/training sessions several times per week

-          43 youth were trained as peer leaders and served as team captains and referees, and lead community service projects in their neighborhoods

-          8 older teenagers joined our network as junior leaders, gaining experience in organizing activities and mentoring from our staff

-          More than 80% of our youth participate in ALL activities in their neighborhood EACH WEEK.

After playing in educational games focusing on the 7 core values of PLAY4PURPOSE, each neighborhood played host to their own championship, featuring a festive environment complete with canopy tents and chairs for special guests, a DJ and sound system bumping melodies across the quarter, locally-made iron goal posts (sponsored by friends in Wheeling and Pittsburgh), and serious soccer happening on patches of green grass and brown earth. What’s better than over 300 youth playing the game they love? The number of parents and spectators watching from the sidelines.

Over the course of 4 championship events in 2 weeks, 224 parents joined us on the sidelines of their neighborhood field to encourage their children while 385 community members joined to learn more about PLAY4PURPOSE.

Over the past 3 months, more than 500 adults joined over 300 youth, to witness first-hand the power of sport to change lives in Cameroon. THANK YOU FOR BEING A PART OF THIS!! 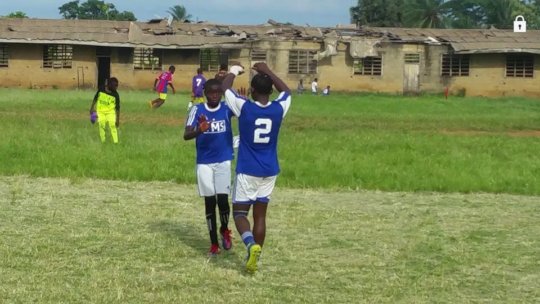 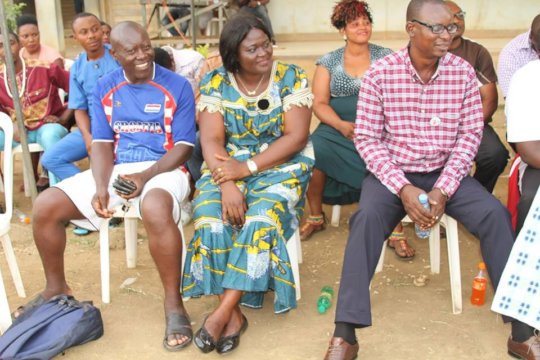 Parents enjoying as their children learn and play
Jul 10, 2017 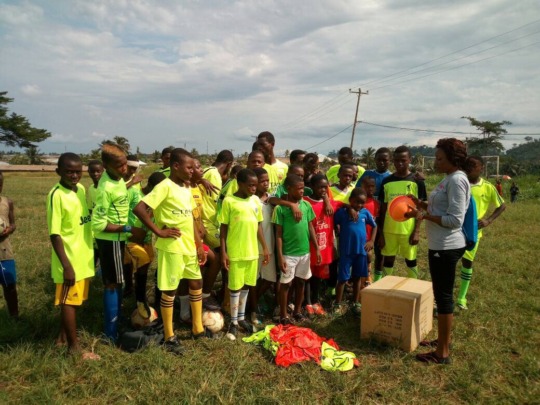 Caroline looks after CameroonFDP youth as her own

Greetings from all of us here in the field in Cameroon and our office in Pittsburgh! We hope your summer is off to a great start.

A few months ago we launched PLAY4PURPOSE, our evolved model for educational, empowering grassroots football in two communities where we work: Kumba and Bamenda. This carefully-developed approach to 'football for good' has an intentional focus on three key outcomes: health, education, and employability. All three of these outcomes are enriched by the leadership, life skills, and core values at the heart of PLAY4PURPOSE.

The need for a stronger connection between our girls program and the PLAY4PURPOSE model comes as a direct result of the transformations we saw in program participants and our staff alike. Our staff member and in-house coach, Caroline, is a perfect example of the opportunities we create for girls and young women in Cameroon.

Caroline is a founding member of our management team in the Kumba office. Since Day 1, she has been intricately involved in growing our football for good initiatives in Cameroon. She was actively engaged in Coaches Across Continents training in Cameroon over the last three years and participated in their online Global Community Impact Coach training. She was the only female in her cohort of 22 coaches across the globe. Since the beginning of this year, Caroline founded and developed PLAY4PURPOSE in Kosala, empowering a younger coach Bidias along the way to become our first community leader at that site.

July marks a new milestone her Caroline's growth as a leader within our organization and within her community. She officially takes on the new role of Director of Girls Football for Good. In this capacity, Caroline will be responsible for the growth of PLAY4PURPOSE in other communities with a specific focus on recruiting and empowering girls through our educational grassroots football programs. This new role was created (thanks to your generous support of this initiative) in an attempt to give equal access and opportunity for girl to experience all the benefits of CameroonFDP across the board. We are confident Caroline is the right person for the job!

As we continue to develop PLAY4PURPOSE for girls across Kumba, we are counting on your support. Please consider making a contribution today or contact us to learn how you can get involved! 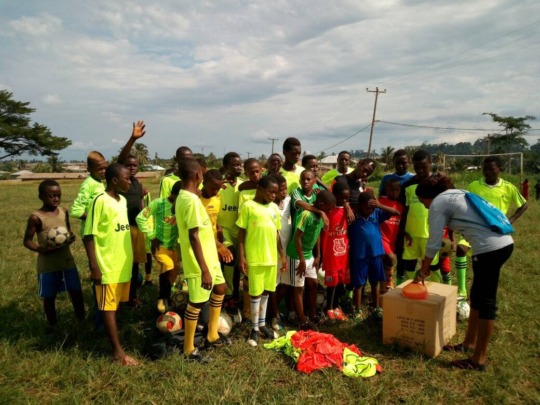 Caroline is dedicated to helping her community 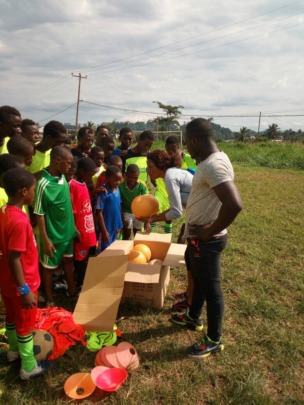 Caroline mentored a participant to become a leader 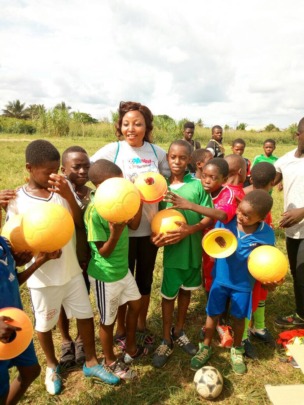 We are excited for what Caro will do for our girls 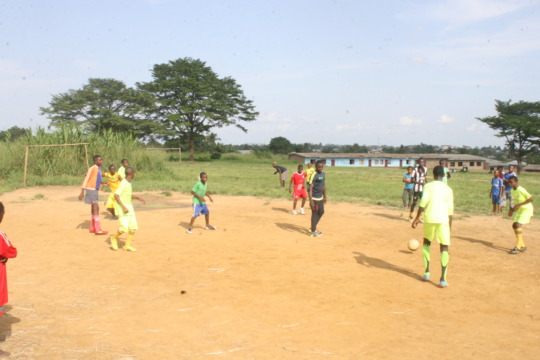 Coach Bidias working with his youth

Greetings from all of us here in the field in Cameroon and our office in Pittsburgh! We hope your summer is off to a great start.

A few months ago we launched PLAY4PURPOSE, our evolved model for educational, empowering grassroots football in two communities where we work: Kumba and Bamenda. This carefully-developed approach to 'football for good' has an intentional focus on three key outcomes: health, education, and employability. All three of these outcomes are enriched by the leadership and life skills at the heart of PLAY4PURPOSE.

We were inspired by the transformations we saw in program participants like Bidias, a young man from the Kosala neighborhood in Kumba. Bidias joined our program when we first launched in Kumba back in 2010. As a secondary school student, he joined the CameroonFDP club at GBHS Kosala and was involved in after-school activities for several years. Fascinated by the concept of football for good and the potential for positive change by connecting youth empowerment with the most popular sport in the world, he made sure to participate alongside his peers in every activity we organized.

At the beginning of 2017, Bidias created a new role for himself within CameroonFDP. He joined his mentor and coach, Caroline (a member of our staff since day 1) as a youth coach in Kosala. This time, he was not participating in educational football sessions. He was leading them.

Flash forward to today and you can find Bidias in the Catholic School Field in Kosala every Monday, Wednesday, and Friday afternoons with more than 50 boys and girls from the neighborhood who follow his lead. He shares with them what he has learned from and how he has grown through CameroonFDP: how to make good decisions; how to set goals and word towards them, and how to be a leader.

As the first official community leader in PLAY4PURPOSE leagues in Cameroon, Bidias is blazing the trail for many young men and women to follow him. None of this would be possible without you! As we continue to develop PLAY4PURPOSE at Bidias' site in Kosala and grow the concept in other neighborhoods in the communities where we work, we are counting on your support. Please consider making a contribution today or contact us to learn how you can get involved! 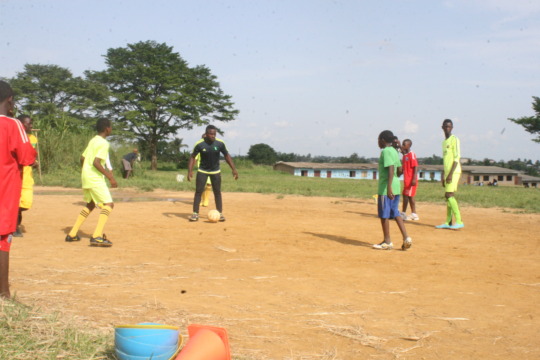 Bidias is a coach, mentor, and educator. 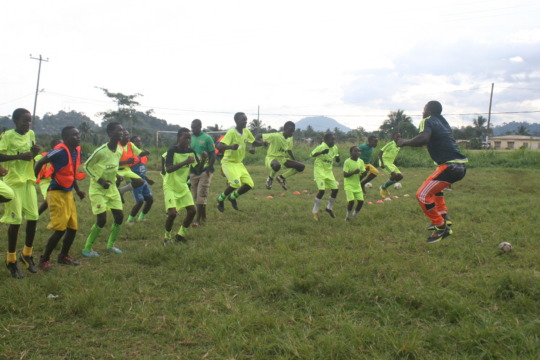