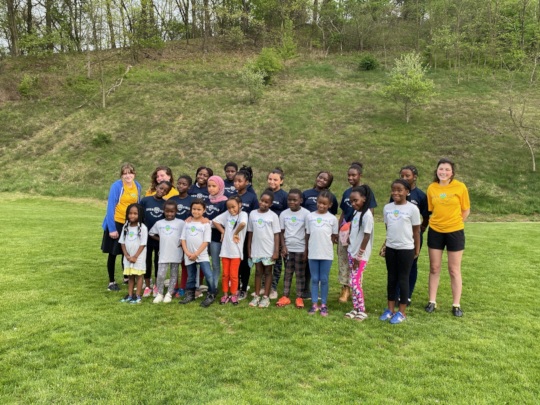 Our programming this summer is engaging 200 girls in Soccer for Social Impact programs on two continents: in Africa and North America. Thanks to partnerships in Cameroon and here in Pittsburgh, our summer camp game is stronger than ever! And more girls will be able to participate and learn from female coach mentors this year than any other year before.

We've linked up with long-time partners in Pittsburgh, like ARYSE and SHIM, and new ones like Mooncrest Neighborhood Programs and Woodland Hills School District. We've hired new coach mentors, including student athletes and recent graduates from local colleges, to give them a platform to combine their passion for the game of soccer and community development. We developed new curriclulum based on Social and Emotional Learning goals that align with our core values and the fundamentals of the game. Combine this altogether and you get a really special experience for our girls.

Meanwhile in Cameroon, our girls completed their 30-day challenge to do healthy physical activities combined with dialogue about their mental health to round our their spring season. Now they're gearing up for summer Olympic-style competitions which challenge them to improve their own strength, fitness, and soccer skills over the summer holiday period. Last week, a select group of girls participated in a workshop to help us design a social enterprise that we can engage them in later this year.

Thanks for supporting our efforts to empower girls thorugh soccer. We look forward to updating you again on our progress later this year! 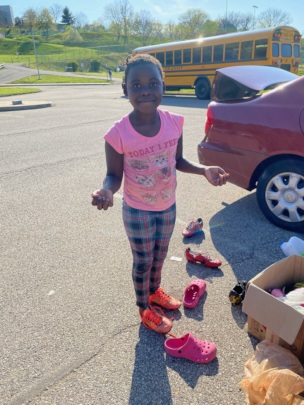 Rita gets a new pair of cleats! 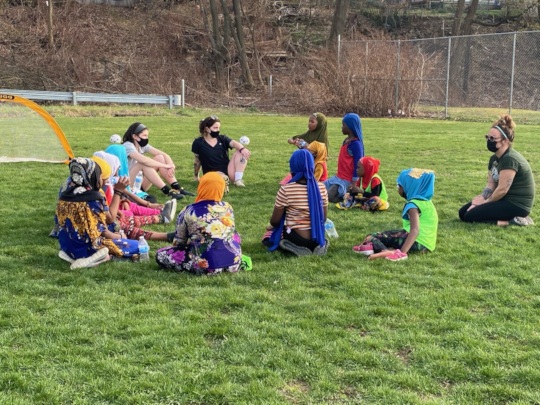 Coaches hold safe space to share on the Northside 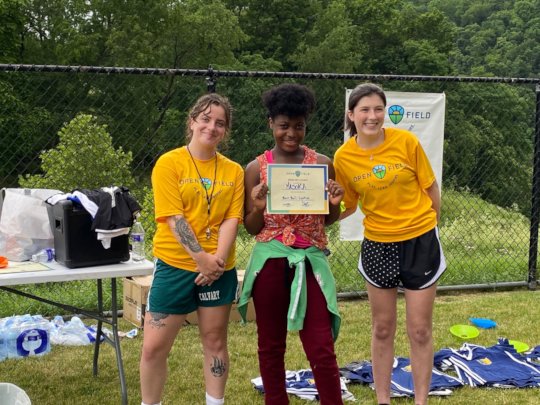 Masoka was one of the awardees this Spring
Jul 1, 2021

Four Updates from the Field 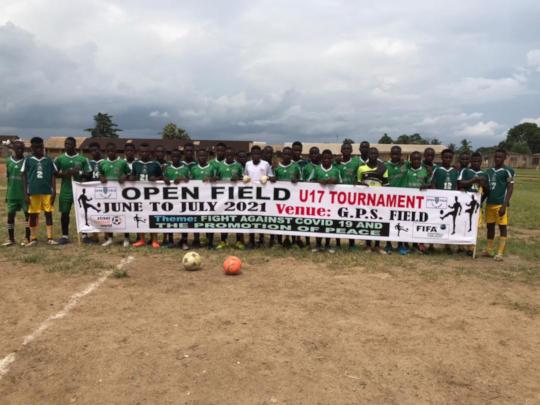 Teams standing with the tournament banner

We're proud to share updates from Cameroon demonstrating the power of your investment in sport to yield positive social impact.

One: Our latest step toward sustainability just got the boost it needed to get off the ground. Thanks to 12 investors from our supporter network, we raised $5,000 in start up capital and now we're launching a social enterprise in Cameroon! Our new Event Equipment Rental business, led by Ashu and Killian, will begin generating revenue by lending canopy tents, tables, chairs, and other party essentials out to individuals and community groups for any special occasion. We'll save money we used to spend on these items for our tournament launching & championships, too. We hope this is the first of many initiatives of this kind.

Two: We're bringing back our U-17 tournament after many years... The theme for this years event is Promoting Peace & COVID-Prevention. The competition kicked off on Sunday and runs thorugh August 1st. We decided to bring back this initiative because many youth are beginning to 'age-out' of our main programming and leagues and we wanted to ensure they had some positive activities to keep them engaged during the summer holiday.

Three: We're hosting our first-ever Olympics-style competition in all our neighborhoods. Youth will register their times running the 400m, 800m and counting their juggling, push ups / sit ups, and scoring on goal from a distance this month and again in August to see how they improve their own personal goals over the course of the long summer holiday. The theme here is personal growth and goal-setting. We are encouraging them not to compare themselves to anyone else, but try and improve themselves as they want to.

Four: 7 youth leaders have been selected to participate in a computer literacy course. The highly competitive selection process was applied to ensure that we invest in those who really want to gain these skills and make the most of this opportunity. Participants selected for this month-long program will gain new skills and knowledge about information technology. We hope this is a launch pad for future skill development to get them on the path to employment or continued education.

What started with educational soccer leagues has blossomed into may more ways of engaging youth on and off the field... all thanks to your commitment to our work! 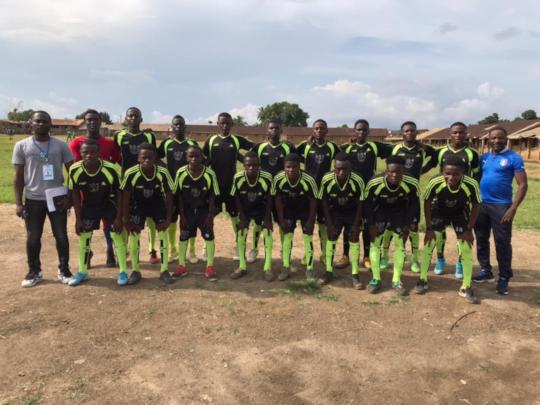 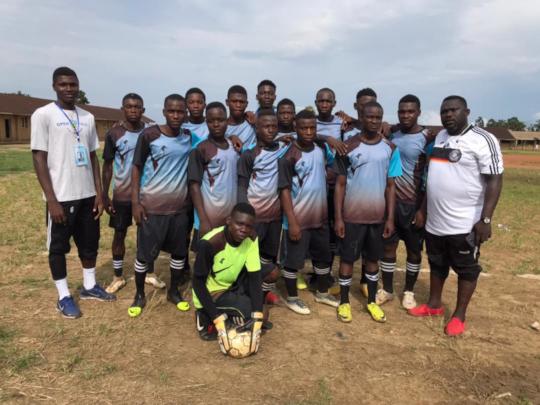 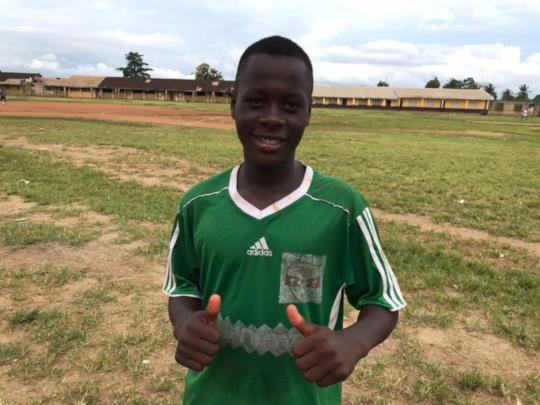 By Justin (with help from Divine and Wallace) - Open Field Team 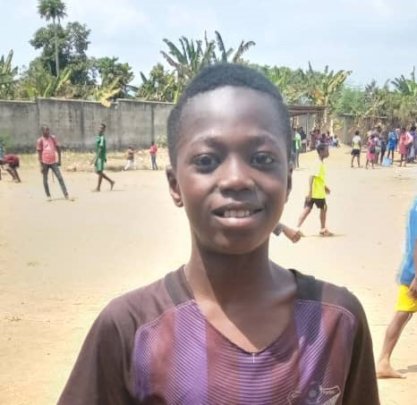 Jesus stands proud at the field.

We launched our latest league in December of last year and our youth could not have been more excited. Nothing brings more joy to them than having a soccer ball at their feet. After the stress and strain of 2020, we decided that focusing on mental health during soccer sessions and games seemed to be the most appropriate way to support our players and coaches.

Leagues are playing in 12 communities in 3 cities in the Southwest and Northwest Regions of Cameroon. And as we enter a new month, we begin Open Field’s own version of March Madness. Quarterfinals will soon kick off in each community as teams begin searching for the #1 spot and a chance to play in the Kumba Super Cup later this Spring. One team will emerge victorious in each of the U-12 and U-15 divisions.

In this report, we highlight activities in Kosala and meet Jesus, the neighborhood’s top goal scorer.

The four teams in Kosala have all played 10 matches. So far Volunteer FCis taking the lead with 14 points. They have won 3 matches, tied 5 matches, and lost 2 matches. After them is a three-way tie with 12 points each between:Doing Good FC, Super Boys, and Dream Team FC.The Kosala tournament is very engaging and competitive and at this point, any time can take first place!

Now about the league’s leading goal-scorer Jesus. He is 12 years old and lives with his mother and two sisters. He is the man of the house. His mom is a peasant farmer who takes care of the family by selling plantains, and cassava at the local market.

Jesus said his favorite moment is going to the field to play soccer with his friends. All thanks to Open Field for giving him the opportunity to showcase his talent and love of the game, since he wasn't able to do so anywhere else because other local soccer academies and training centers cost money which his family cannot afford.

Speaking of love of the game, last month we asked our community share why they love the game. We had an overwhelming response from youth in Cameroon, CEOs, executive directors, advocates for social impact and a professional soccer player, too! Check out what they said via the link below!

P.S.  We're inspired to continue this work because of kids like Jesus and people like you who invest in us. Let’s keep building! 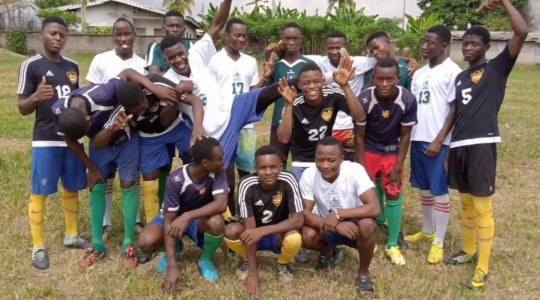 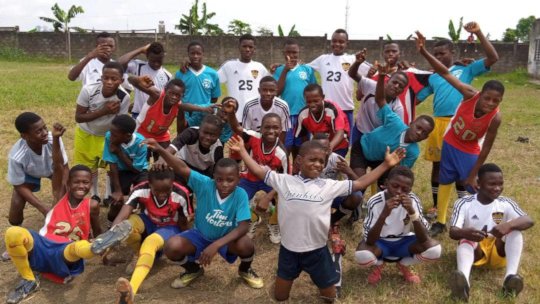 1 2 3 4 5 6 7 8 9 ... 18 ›
WARNING: Javascript is currently disabled or is not available in your browser. GlobalGiving makes extensive use of Javascript and will not function properly with Javascript disabled. Please enable Javascript and refresh this page.