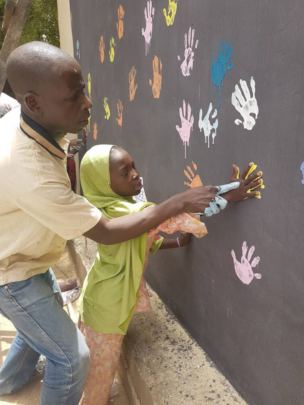 Helping to decorate our new child friendly spaces
Earlier this year we emailed with you with the amazing progress we had made in NE Nigeria all thanks to your support. We were excited to share the plans we had for 2018 which included:
- building 60 more temporary learning centres, rehabilitating 120 damaged classrooms and training 450 teachers across the North East.
- helping 23,000 conflict-affected children not only to have access to basic education, but benefit from teachers and social workers trained in counselling and child protection.
Now we can share with you that this work has begun - we are in the process of building 30 child friendly spaces where children who have been impacted by on-going conflict have a safe space to play, learn and access counselling if they need it.
Thank you so much again for supporting our work to help conflict-impacted children in Nigeria. With your support, we are changing lives.
Mar 8, 2018 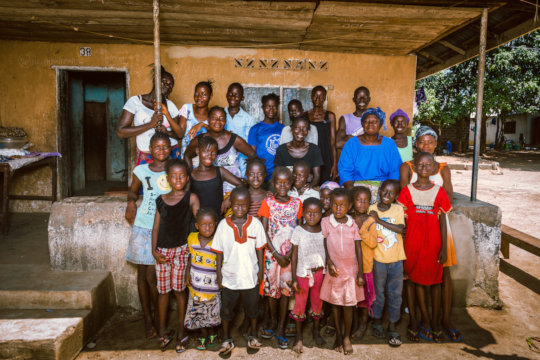 Manu, Mamie and Nancy and their children

Simple household poverty is one of the biggest barriers keeping children out of school in Sierra Leone. Many families cannot afford to feed their children, let alone send them to school.

Yet education has the power to transform lives and reduce poverty. In fact, if all children left school with basic reading skills, 171 million people could be lifted out of extreme poverty.

That’s why we want to say a huge thank you for supporting our work helping mothers set up businesses in Sierra Leone. Thanks to you we are able to support families like these....

Manu, Mamie, and Nancy are the three wives of hospital worker Foday Tommy. Their husband, the family’s main breadwinner, died during the Ebola epidemic, and the three women have been left looking after 26 children between them - some biologically theirs and others that they have adopted.

Thanks to your support, Street Child were able to provide them with a business grant and they have started selling pepper, okra, palm oil and vegetables.

Manu: ‘It is only recently that the children have stopped crying. The grant is a source of courage to me - it helps reduce worry. The business is growing gradually but it’s still tough when you have this many children and you have no husband. Life is still tough for us, but I’m glad our children are in school because, at the end of the day, it’s the children that can make their story a different one.’

6 Months On From The Sierra Leone Mudslide 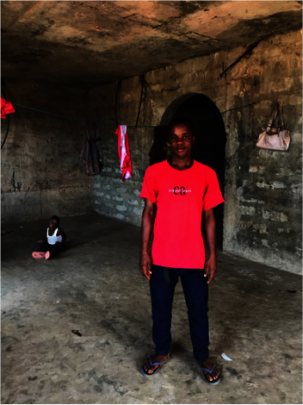 Umarr dreams of returning to school

On Monday 14th August an estimated 1,000 people died when an entire mountainside collapsed in the capital of Sierra Leone. Huge boulders, dislodged by rain, left a two-mile trail of destruction – flattening everything in its pat

Immediately after the disaster the international community kicked into gear. Thanks to support like yours, Street Child was one of the first on the scene providing emergency food and water. Street Child’s team of 70 national staff worked 12-hour days for over a month providing over 85,000 meals, water, clothing, blankets and trauma counselling to those who had lost everything. Thank you for making this possible.

Sadly, 6 months on from the disaster and there is still much to be done.

Our latest reports shows that over half of families impacted by the mudslide still have no source of income. Most people lost not only their homes but also their livelihoods. The government provided support packages to help victims rebuild their lives. Registered survivors were given £200 cash, living essentials like rice, cooking oil, soap, blankets and cooking utensils. But it wasn’t enough.

Hannah looks after six children. She spent all the money in her support package to rent one room made out of zinc. Her 11-year-old son was sent from school because Hannah couldn’t afford to cover all the costs.

“My biggest challenge is trying to get money to start a business so that I can support my children. Every day they need food to eat – it is a very big challenge.”

But Hannah was one of the lucky ones. For orphans like Umarr, the government support never appeared.

19-year-old Umarr Kamara was orphaned by the mudslide when his house was washed away with his parents inside. Despite losing everything, he was unable to register as a mudslide victim.

“I tried to register with the government as a mudslide victim, but I was turned away because they were already full.”

Umarr currently lives in a concrete frame of a building with other mudslide survivors. However, the man who owns the place has been making threats to kick them out. Umarr, and the other mudslide orphans would have nowhere to go.

For Umarr, education offers the only hope of a brighter future. But Umarr hasn’t been able to attend school since the mudslide.

“Freetown has better schools, so I have decided to stay to finish my education, I hope to become a doctor one day. However, there are no government schools close by and I can’t afford the 700,000 leones school fees on my earnings from breaking rocks, so I haven’t been to school since the mudslide.”

Some orphaned children were taken in by families, but many are too poor to feed them let alone cover the costs of schooling. The number of families who are struggling to make a living, combined with the lack of government schools means that over half of children surveyed by Street Child are out of school or at risk of dropping out.

With your help, we can give more children the chance to return to school. Please donate what you can.