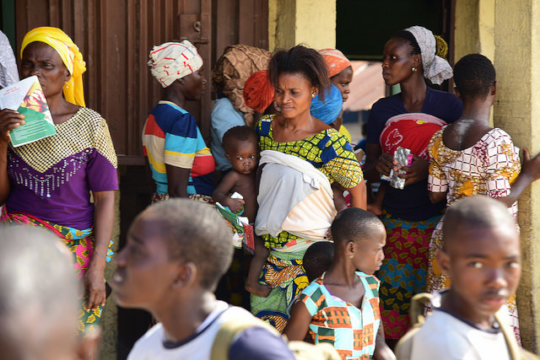 Leadership, Effectiveness, Accountability &Professionalism Africa is a 16-year old nonprofit organization youth-focused on raising leaders that will transform Africa. Our organization has dedicated its efforts to developing visionary youth, ethical and successful enterprises leading to community development, nation building and will to influence and transform lives positively.

Primarily, our work borders around equipping youth to lead themselves, communities, organizations and the continent. We work with underserved youth, youth-led organizations and youth actors to bring this to reality.

Afew major highlight from last year was presenting our findings to educators in Lagos State on the need to revamp the curriculum in public secondary schools to include a leadership and life training; building on the existing framework of the national youth agency, NYSC to use youth to inspire youth while reducing unemployment simultaneously. You can read our full year in review of 2018 here.

Let us take a moment to reflect on one of the community development projects carried out by some of our teenagers in Lagos, Nigeria. Sabokarji is an area with limited access to affordable healthcare in Apapa area of Lagos state. To reduce some of the killer disease outbreak associated with child and maternal mortality among inhabitants, iLEAD Students from Apapa High School responded to this challenge, partnering with health professionals (volunteer) to embark on a massive health outreach to provide treatments and drugs for Malaria, Cold, Pains, etc., for inhabitants of the community. This intervention also aims significantly to reduce the number of children dying from malaria in the community. Mosquito nets were distributed to breastfeeding mothers and parents with children under-five. However, many families in the community still need proper medical attention, iLEAD students are looking for opportunities to do more.

The year 2019 will see LEAP working with partners to address fundamental problems in education and business and proffer solutions for how Africans, particularly African youth can fulfill their potential. The Leaderahip Institute will lead us further into actualizing our vision.

I invite you to join us in this journey.

Welcome to a new year, a year of possibilities. 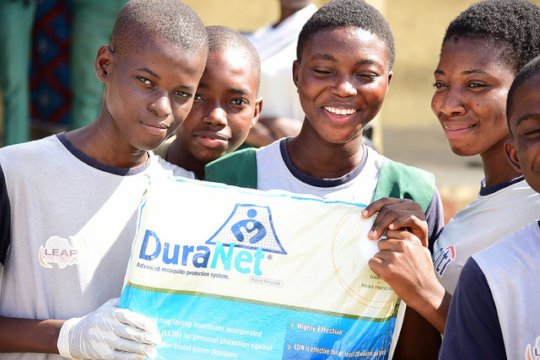 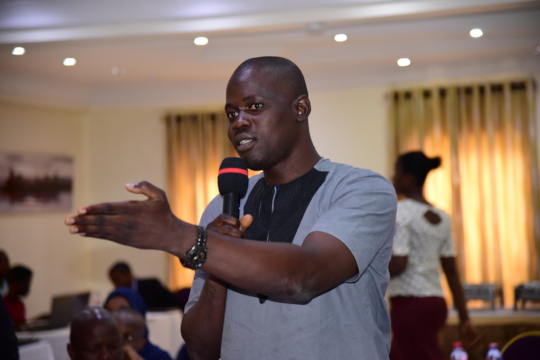 Every child has a right to quality education. Silently sitting above this fact is also the right for teachers to be sufficiently empowered to become agents of transformative leadership to students. In the world and indeed Africa, teachers have significant roles to play in the total development of every child, therefore they must be provided with the requisite tools and support to stand as inspirational models to students.

The educational ecosystem is relatively dynamic which in the case of Nigeria, lacks adequate infrastructure to groom students to become transformative leaders. Research reveals that between 2009 to 2018, Nigeria’s budgetary allocation to the education sector is between 4 - 9.94%, with its highest allocation in 2014 at 9.94%. In 2018, only N3.90 trillion or 7.07% of the total budget of N55.19 trillion was allocated to the sector. Apparently, the country falls short of the 26% benchmark set by UNESCO). Arguably, teachers have the most time with students, therefore the need to adequately equip teachers to effectively groom students and become models of leadership, integrity and many more is increasingly becoming a major aspect in the discourse around creative pedagogy.

Dr. Sidiq Uthman Okanlawon might not amply cover the array of teachers who have been trained in LEAP's iLEAD programme, however he fitly represents the impact of deliberately injecting leadership and life skills in the school curriculum on teachers. For over three years, Dr. Okanlawan has been involved in delivering the LEAP Africa’s leadership and life skills curriculum to secondary school students as a teacher volunteer in his school. Referring to the knowledge gained from cascading the curriculum to students, he admits that the best way to creatively impact the lives of students is to set teaching objective using the SMART (Specific – Measurable – Achievable – Realistic and Time Bound) formula.

The iLEAD programme was designed to provide youth in select public secondary schools in with leadership, life and employability skills to achieve personal success and transition into higher education or paid employment leveraging a Training the Trainer Approach. The Train the Trainer approach essentially seeks to empower Teachers in schools to cascade the iLEAD curriculum to student beneficiaries.

Today, Dr. Okanlawon is an academic doctor of Islam and Contemporary Studies, and he attributes this new degree to the values he learnt from the iLEAD programme. He explains that his engagement in the programme has given him a broader view to life and now demonstrates leadership in every facet of his endeavours. According to him, "servant leadership is the only pathway to positional leadership. Hard-work and effective time management are two main qualities every teacher must possess to become true leadership models to their students". The changes in teaching methods and the visible development in the academic journey of Dr. Sidiq Uthman Okanlawon reaffirms this truth. School teachers have every potential to model leadership to their students if they are well supported.

From all indications, Dr. Sidiq Okanlawon now demonstrates a strong value of integrity, patriotism and self leadership. He understands his role perfectly as uses insight from delivering the iLEAD curriculum, in his daily activities.

LEADERSHIP AND LIFE SKILLS: THE HOPE OF THE UNDER-SERVED CHILD 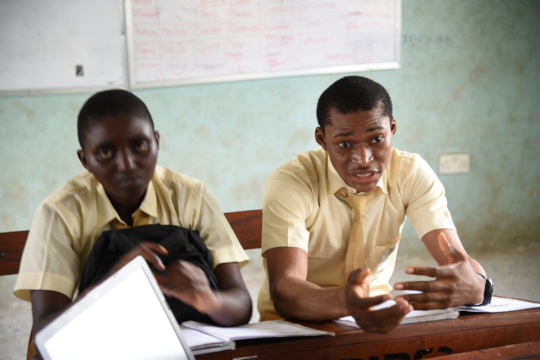 LEADERSHIP AND LIFE SKILLS: THE HOPE OF THE UNDERSERVED CHILD

No fewer than 15 select secondary schools across three (3) cities, namely; Lagos, Enugu and Akwa Ibom in Nigeria has benefitted from the iLEAD programme.

Emerging pieces of evidence from our interventions and interactions with young people suggest that non-cognitive skills play a key role in the development of a child. The iLEAD Programme evidently proves this fact, as many of the beneficiaries are constantly experiencing a change of mindset and yielded series of personal decisions related to their ambitions and aspirations. Most of them have taken deliberate steps to create a better future against the harsh realities of their economic background.

For some of them, this means as little as purchasing an alarm wrist-watch (as of the case of Hygenus; a student of Opebi Senior Grammar School), which he believes will instil the values of being timely. Prior to attending the programme, he never took life seriously. He didn't have an ambition, was carefree and would wake up very late on school days, but this has changed now.

Efe, on the other hand, is a very ambitious student who now wants to study Law in the university and eventually become a lecturer. He intends to venture into lecturing with the sole aim of volunteering his skills and knowledge to assist the underserved child. According to him, he has started taking steps to do this now by volunteering to contribute to a cleaner environment by mobilizing people to clean the community where they live.

The most humbling of these stories are from Faith; a 15-year-old in one of the schools in Akwa Ibom State. Her story stands out as she demonstrates a change of mindset and aspirations with the help of the leadership and life skills curriculum. One very remarkable outcome is the total switch in her academics from very poor to becoming an “A” student.

Faith’s parents are separated but live with her father who thinks less of her abilities and considers her going to school a waste of time due to her low grades. In junior secondary school Faith never had an A, and with a cumulative average grade of 45% her father thinks she will end up like her older sisters.  Her teacher also revealed that Faith had very low self-esteem before taking the iLEAD programme and would isolate herself from peers. She wanted to just get married after secondary school so she could be free from her father.

However, iLEAD changed all of that!

After joining the leadership and life skills programme, Faith’s cumulative average has risen to 65%, and had four A’s on her last exam. Faith scored an A on her report sheet for the first time in her secondary school trajectory. Faith who is the last born of 5 siblings, tells us she has learnt to remain self-confident and positive minded. We were particularly stunned by the confidence in the tone of her voice when she said;

‘…it doesn’t matter what my father thinks of me, I know who I am, I am intelligent and I will make an impact in my community, and in Nigeria, because I am the flower that changes the odour of society’.

Asides improvements in academic outcomes and raising aspirations, one key lesson from this is that life skills empower girls to recognise how gender relations shape their interactions with society broadly and how to respond to these dynamics.

Leadership and life skills exceed the provision of or information. These attitudes transform them into positive change agents who are transilient – leaping above structural social conditions – rather than just coping with existing limitations. 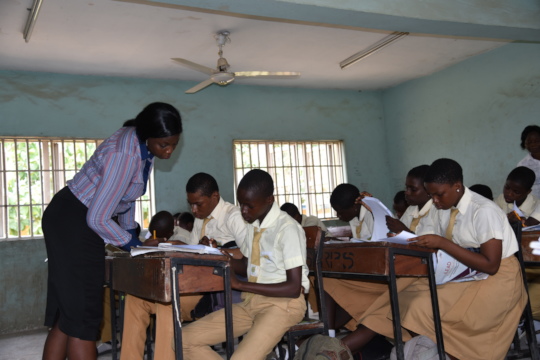 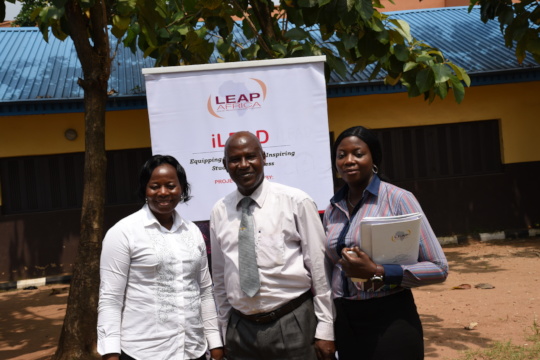 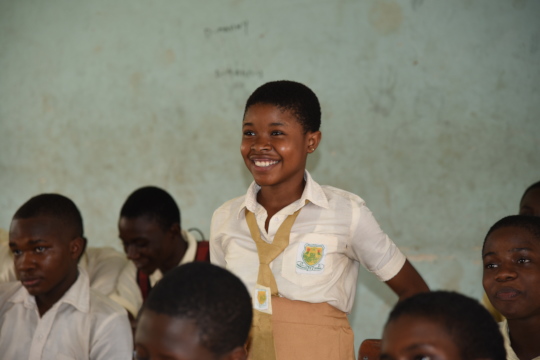