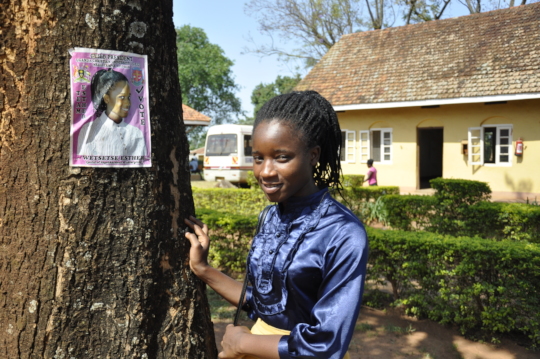 Esther with one of her campaign posters

In the world of student politics at universities and colleges across Uganda, the top spot is Guild President. This is an elected position which AAH students have run for before, but they have never succeeded until now! AAH students didn’t just win one top spot – they won two! And what’s more, both are young women.

Esther and Georgina were both elected to the top spot at their schools within just a few weeks and a few miles of each other. Esther attends the Uganda Christian University in Mbale (UCU Mbale) and Georgina attends Salem Nursing School, also located in Mbale. Both young women were experienced in student government from their secondary school days where both were elected prefects.

I met with Esther on her campus and while finding a place to sit, many students called over to us to say hello to Esther and congratulate her. Esther is only the second woman to become guild president at UCU Mbale, but she was confident that she could win. “I felt that I was someone with potential.” She wasn’t worried about who her opponents would be plus she had the support of the extended AAH family on campus who helped her “so much, so much, all of them supported [her].”

Running on the platform “spirit of togetherness and integrity,” Esther used a positive message to try to bring together students of different tribes. Her team went into full campaign mode by branding water bottles, t-shirts, and, of course, banners and posters. They put on events, like a cododi dance (traditional drumming and dance routine) and attended school events like the sports gala. By making themselves visible and promoting her positive message, Esther took the lead.

Now that she has won, she is determined to see that she fulfills her campaign promises. One of her top priorities is getting water tanks installed in the student dorms for dry season next year. Esther also wants to stay true to her campaign slogan. “I want to see that the different tribes and different campuses come together.”

Georgina attends an all-girls nursing school on the outskirts of Mbale and became involved in student government during her first year. The previous guild president befriended Georgina and encouraged her to run for the role in her second year because of her strong leadership skills. Georgina used her previous experience in her main campaign message saying, “I am capable of making the environment as you would like it.”

Because Georgina’s school is small, only 158 students, she had to run a campaign that focused on getting to know as many students as possible and speaking to each one herself. She went from dorm to dorm speaking with each student to ensure that they knew her message and her goals. She also participated in debates where her previous experience helped.

After such a close race, Georgina knew she had to prove herself still. She immediately got to work on her campaign promises and goals, and when I spoke to her she had already accomplished one of them – only 2 weeks after being sworn in! Georgina managed to move the guild office to an unused office, rather than sharing an office in the main admin building with school staff.  Georgina also plans on having another set of washrooms built and adding trenches to help with flooding on campus during the rainy season.

Both Georgina and Esther were able to get to this point because of their own determination and a little help from fellow students and the encouragement of AAH staff. University Coordinator Sam is exceptionally proud of his students and hopes that their success will encourage our other students at other campuses across Uganda to run for student leadership positions. He hopes that Esther and Georgina are just the start. 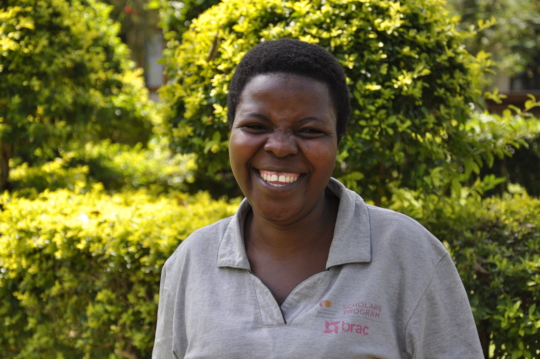 Arlington Academy of Hope in 2018 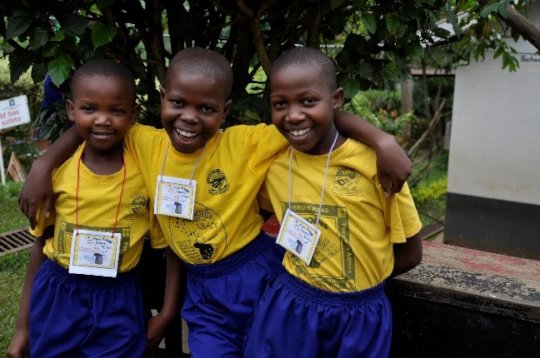 Hurray!  We've reached our goal for this project thanks to your support.  Thank you!

Your contributions have provided so much more than an education. Our students learn the value and see the benefits of hard work, gain leadership skills that will last a lifetime, and build their self-confidence. Listen to the inspiring words of Kibone Sarah, a 10-year-old student in Grade 4 at Arlington Junior School:

“My opinions are treated with respect by other children. I have also learned to be responsible and smart at all times because we learn that good leaders should be exemplary. I have promised myself to continue in the line of leadership so that in the future I can become an activist for children’s rights and equality between men and women. Yes, I can!”

And the difference you are making goes beyond the walls of Arlington Junior School. You’re providing a bright future for children like Alex, who attends our outreach school in Bumwalye:

“Bumwalye has made me a more confident person through the various debate tournaments I participated in that were organized by the Outreach Program,” says Alex.

Although this project is closing, we have another project on GlobalGiving with the same goals, and we're still working hard to give the gift of education to students in Uganda.  The support we've received from this project and others will help us to accomplish our lofty goals for 2018 like:

We cannot thank you enough for your support that makes all of our work possible! You are truly making a difference in the lives of thousands of children with your generosity.

Thank you for all you’ve done to support these amazing students in their quest for an education! 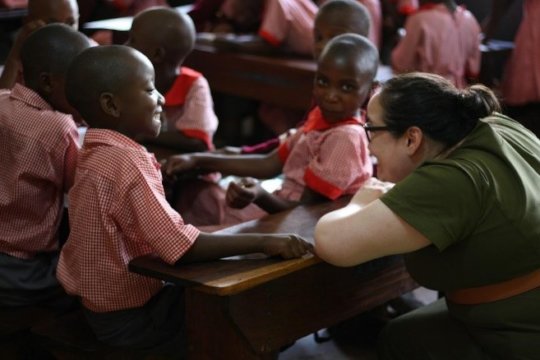 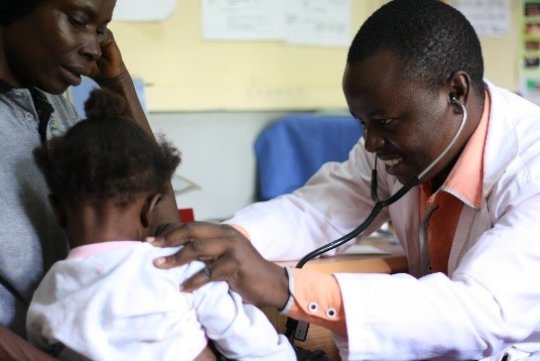 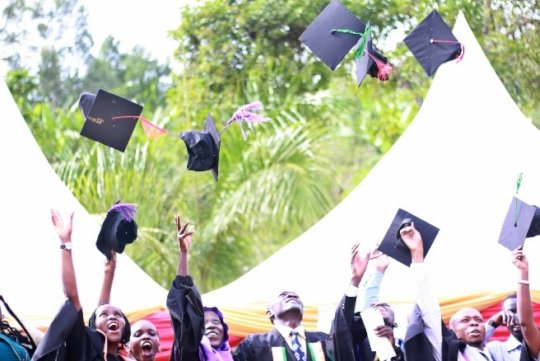 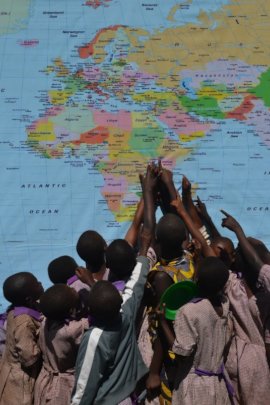 A Sister School for Bumwalye Primary

By Dick Burk - Board President 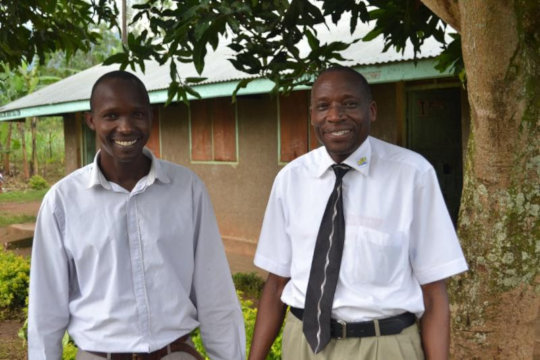 Bumwalye Deputy Head Teacher & Head Teacher
The AAH Outreach Program provides training, resources, and materials to 26 government-run primary schools in three districts in Uganda, serving over 20,000 students. As part of these efforts, AAH established a sister school program with US elementary schools. The model for our sister school partnerships between US elementary schools and primary schools in Uganda is the special relationship Arlington Traditional School has with our Uganda school, Arlington Junior School.

Tuckahoe Elementary in Arlington,VA was our second sister school, pairing up with Matuwa Primary School. Tuckahoe has since exchanged letters with Matuwa classes, had the principal and two teachers visit and volunteer, and 20 Matuwa students are now sponsored by Tuckahoe families.

We are exicted to welcome our third sister school, Halley Elementary School in Lorton, VA as a sister school to Bumwalye Primary School! This month, Bumwalye sent more than 900 letters to Halley, and Halley students are preparing their responses. Developing a more intimate relationship between students helps to open each student to the issues, ideas and concerns of their peers and broadens their educational experience. We're confident it's going to be an enriching relationship for all the students involved! 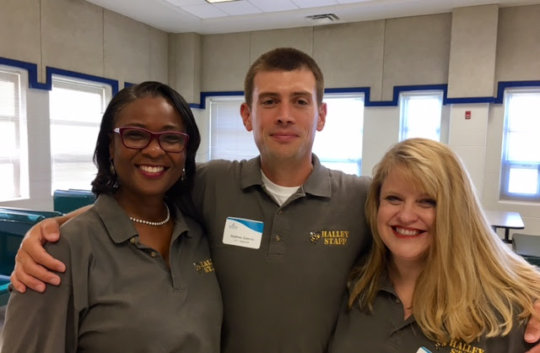