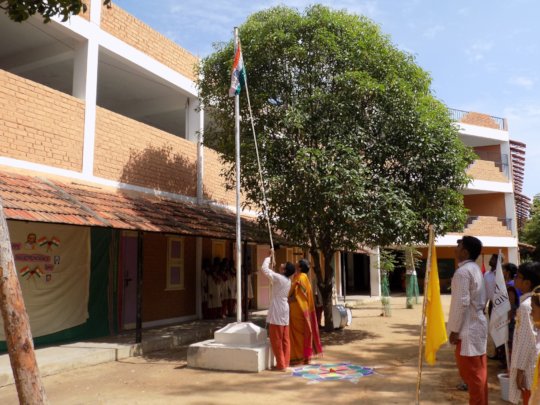 It’s a moment of pride that India is making
strides in the international arena, as a nation
marching forward in its significant contributions
to the world and the humanity. At Isha Vidhya,
we make every effort in building the next
generation citizens who are not only educated
in academics, but also get a well-rounded
education which includes arts, crafts, sports,
environment, various skills, etc. We make these
children ready to face the ever-changing local
and global environments so that they shine as
superstars in the future!

We would like to bring to you, the details and
the pictures of 2019 India Independence Day
celebrations from the 9 Isha Vidhya schools!

Chief guest, Mr. Vanjimuthu Palani Samy,
Director of Boomarang Ice Creams, hoisted the
national flag. Students presented a bright cultural
program, and the highlight was that the KG kids
were dressed like the national leaders. 25 bicycles,
sponsored by a Mumbai-based volunteer were
presented to students!

The Principal, Mr. Brindhavan hoisted the national
flag and kicked off a colorful cultural program.

Isha Vidhya Tuticorin hosted a traditional
celebration with flag hoisting, march-past, drill,
speech by a few students and the school Principal,
and concluded with singing of the national anthem.

The school recognized the winners of Tinkering
workshop, English oratorical competition, and
the drawing competition. Students performed a
dance on patriotism. There were also speeches
by students. The entire program was organized
and compered by the students, to the delight of
parents sitting in the audience!

Mr. Senthil Kumar, Assistant Engineer of the
Parangipettai Electricity Board, was invited as
the Chief guest. The Mass drill by the students
took everyone’s breath away!

The students presented a colorful program at
the district stadium, joining the government
celebrations. Students from nine other schools
performed during the event. They presented
Kolaatam, Bharatham, Oyilattam, Tamil folk
songs, and patriotic songs. It was a matter of
honor that out of the 300 district schools,
Isha Vidhya was selected to present a program
at the function.

The Principal hoisted the national flag and
gave an inspiring speech. As part of these
celebrations, our school houses played four
states of India - Tamilnadu, Karnataka,
Punjab, and Gujarat. Grades from 5th to 12th
were given opportunities to take part in the
program. Competitions were held between
the houses. The school co-ordinator
organized planting of trees during the occasion.

We hope you enjoyed reading about the
celebrations, and the pictures! We would like
you to be continuously involved with the
project to encourage generating next generation
citizens. We suggest that you start a monthly
recurring donation to support the schools and
their operations. You can do so at the
following link:

We thank you for all you have done to educate
the rural children of India, and we look forward
for your continued support! 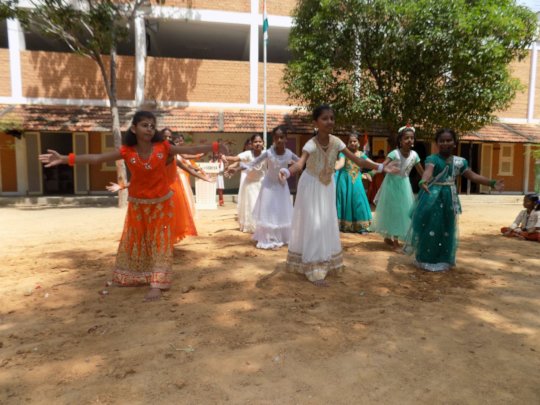 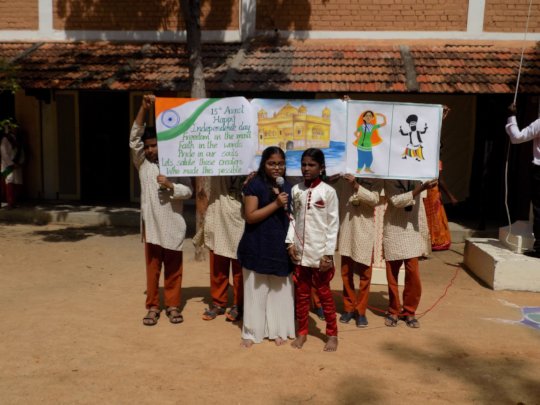 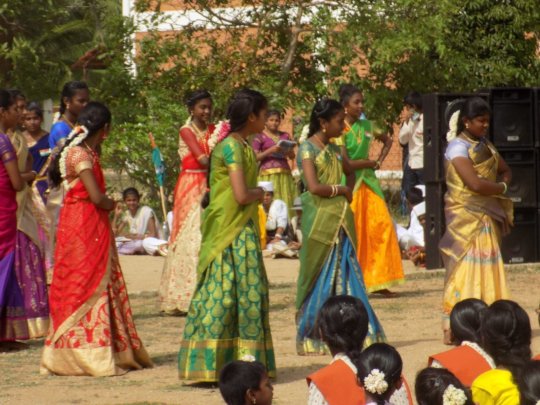 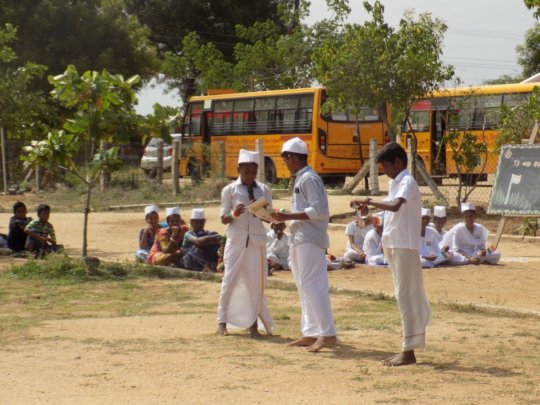 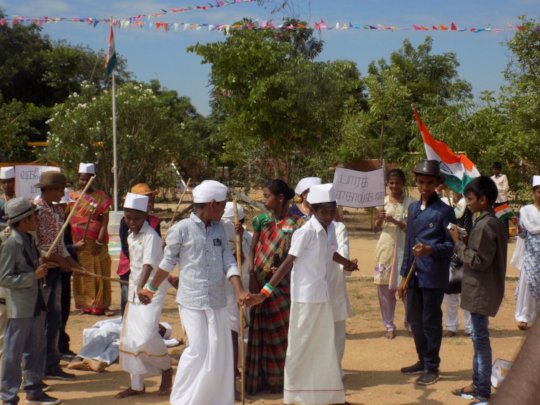 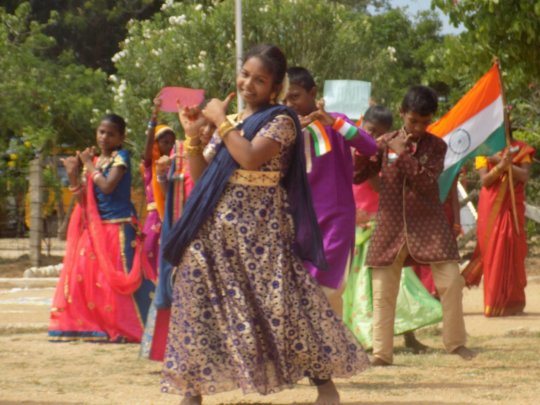 Exploring about everything around oneself is the
key to learning.  And learning with curiosity is the
basis of education.

The students are Isha Vidhya are exposed to
various activities based on their curriculum as well
as for extra-curricular interests.  Learning about the
nature, and especially about the living things that are
not human are an important part of the learning process.

As part of this, the Tuticorin (Thoothukudi) school
of Isha Vidhya took their 7th grade students on a
field trip to the bird sanctuary at Koonthakulam in
Tirunelveli district. A lesson on bird’s sanctuary in
the curriculum enabled this trip.

Students observed various kinds of migratory birds
at the sanctuary. They gathered interesting information
on birds from the forest officer. They learnt that
this year has seen very few migratory birds to the
sanctuary. That’s a pointer for them to learn why that
is so.

The students were also curious about many other
things, and hence posed the related questions to the
forest officers. After a tour of the sanctuary, the students
played in a park for a little while and then returned to
their school.

Inspired by the education at Isha Vidhya? You can
consider starting a monthly recurring donation for
as low as USD$10 (INR 680) to be in continuous
engagement with the school and its activities!  The
link to start the donation is:

We thank you for all you have done for Isha Vidhya,
and we look forward for your continuous engagement.

Students help with plants for their school kitchen

Noon meal is a critical part of nurturing a child’s
education journey at Isha Vidhya. We have a huge
percentage of students who come from families
where healthy, balanced food is a luxury.

In order to support our school noon meal, we have
introduced organic farming in our schools. Students,
along with teachers, gardeners and other staff members,
take part in maintaining the school garden. It is a delight
to see the plants grow and give fruits. Our kids love to
work with them.

Isha Vidhya Vanavasi recently harvested 13 kg of radish
and 5 kg of lemon for their noon meal kitchen. Please see
the related photographs to get a idea of the effort!

If you would like to engage on a ongoing basis with
Isha Vidhya’s effort in educating rural India, please think
about starting a recurring monthly donation for a small
amount. The link to start is:

We thank you for all you have done for Isha Vidhya,
and we look forward for your continued support. 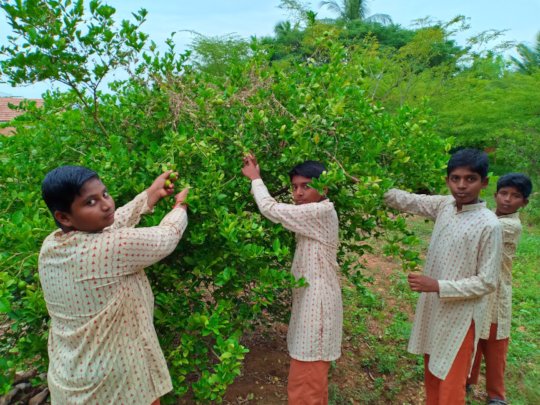 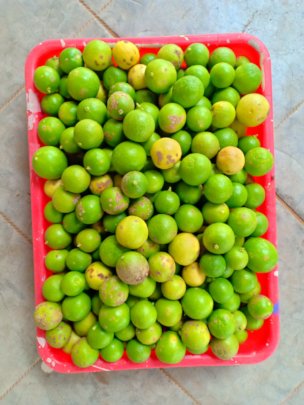 ‹ 1 ... 41 42 43 44 45 46 47 48 ... 107 ›
WARNING: Javascript is currently disabled or is not available in your browser. GlobalGiving makes extensive use of Javascript and will not function properly with Javascript disabled. Please enable Javascript and refresh this page.