Research on Bullying and Vacation Camp 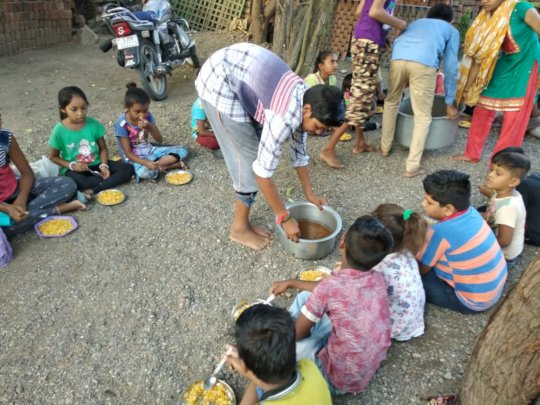 Bullying is common, it is everywhere, and among children too. Few of our children and facilitators shared about bullying in the area, school and even in Balsena.

How can we create safe space in Balsena? How can children really understand about effects of bullying?

"Participatory Action Research" came as one of the answers.

We organized a camp during 6-9th May with some of the active children of Balsena, and discussed issue of bullying in their lives, and how it affects any child. We asked them if they would like to get deeper into it and also bring about a change in their behaviour and in others. Together we designed 4 tools for collecting data for this Participatory Action research, where children came up with 54 indicators of bullying with separate indicators for physical, mental, emotional, economic and sexual bullying. They also identified 10 most common places where they face the same. They discussed about the impact it has on the child, his/her family, community and society at large.

Based on the data collected, children analysed the data for their own area, prioritized the issues and made action plans based on the same.During the year, now they will organize programmes accordingly.

Compilation of data of all these 17 communities and its analysis is still under process.

Vacation Camp was organized in 17 areas of Balsena, where on an average 111 boys and 80 girls took part every day. Activities like 1 minutes games, sports games like cricket, volleyball, handball, kho-kho and kabaddi were organized. Children learnt hard skills like ironing cloths, mapping area, budgeting, making decorative pieces and wall hangings, stitching buttons and torn in the cloths, Sharbat-(home- made cold drink) making, etc. Through these hard skills children learnt that no work is small. Many of these tasks are for women and girls in real life so the boys learnt to respect the girls and also do these tasks. This provided as excellent opportunity to reduce discrimination between boys and girls and make them more gender sensitized. They also learnt soft skills such as letter writing, basic daily life arithamacy, application writing, etc. Children also organized "Samuh Bhojan" and Swayam Pak" activities where they would either get food and eat together, or they would cook together, and eat together. Children enjoyed this program the most. Boys also participated in cooking. Discrimination reduced not only between genders, but between castes and religions as well, as in their society people from different castes or religions do not even drink water at others' place.

Through this Vacation camp children not only hard and soft skills but also learnt life skills such as creative thinking, communication with parents, leadership, getting group consensus for any decisions and values like equality and no discrimination.

Facilitators observed that children started coming punctually for all the activities. Many parents would also come, and observe what was happening, some would even join the activities or help out the facilitators. This was a huge achievement for us.

Bholaram, is name of a child who is very active in Balsena point. He also came for leadership camp on bullying. He would be the first to reach point of his area, go and call all the children, help out in activities, tell children not to discriminate and bully others.

On 25-27th April, workshop with same theme was organized in Khadaki, Sarvoday Parivar Trust at Dharampur at Valsad district, where 43 boys and 39 Girls along with 5 facilitators took part.

In their feedback, children shared that they learnt not to give up if any difficulties arise, take only what you need and not what they greed, working in collectives is better than working alone, trees also have life and we will ask other people to not cut trees.

On 10-12th May, 6 of our children participated in Gujarat Bal Manch, and 6 of our facilitators facilitated the workshop. 87 children and 27 accompanying adults came from 17 organizations from different districts of Gujarat. The theme of the workshop was "How to form and strengthen a good Children’s collective?" Balsena and other four existing collectives analysed strengths and limitations of their collectives. Other children from 10 organizations founded their own collectives. Everyone also discussed different values, do’s and don'ts they want to have or already have in their collectives.

Shaishav has been providing support to Aatapi Sewa Foundation from last year to strengthen their work with children and build a children’s collective. During past three months Shaishav facilitated two trainings there on how to organize and conduct vacation camp and on child rights within children's collective. 85 children participated for these trainings. 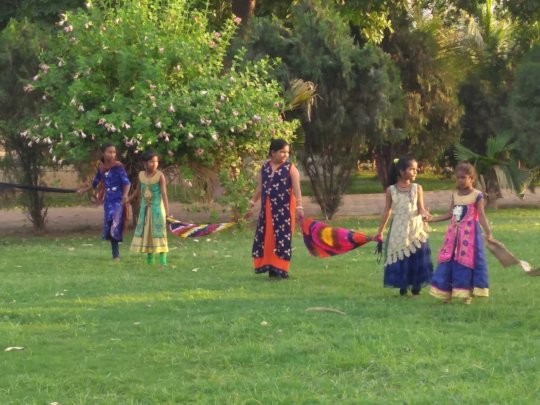 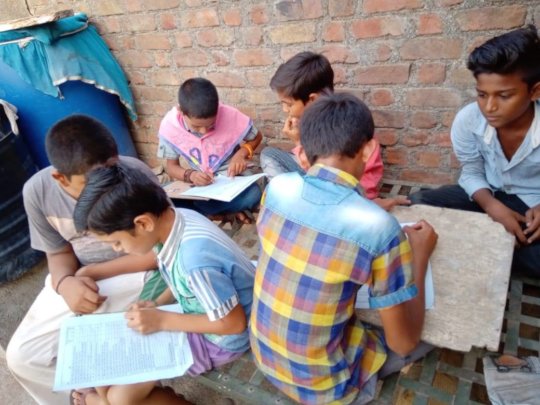 Project report for Transform the Lives of Children in Gujarat, India - #9993

Our children take part in many national and international platforms. In month of February, 3 children from Balsena took part in an international conference “Children as Agents for Transforming Society.” The conference was hosted for Asia chapter for the first time. The theme was child protection. Children learnt about child rights, U.N.C.R.C and the situation of child rights in various parts of Asia, online safety and internal development.

Regular leadership camps are organized to strengthen council members, and leaders. 81 children took part in leadership camp in February. The main theme of the camp was life skills. Children learnt about skills like listening, planning and reflection.

We believe that giving children exposure, helps them in building life skills and also exposes them to various career choices. Balsena children visited Science City in month of February, where they learnt about some of the main principles of science, and their application. 176 girls and 186 boys took part in this exposure visit. In month of March, Balsena children visited District Library. 141 boys and 135 girls learnt about how to categorize the books with author, publishers, topic, etc., and learnt about spectrum of books available in Library.

Exam time in Gujarat is in April. We did various activities throughout the 3 months to help children in clearing concepts in fun way and giving those tips and helping them solve difficulties in the subject or topics they found difficult. In February, we organized a Balmela on theme of Maths as children often find the subject difficult. 153 children took part in the same.

Everyone knows about the climate crisis, but we are not doing anything about it. There is no child rights, if there are no earth rights, our very survival is dependent upon it. Taking inspiration from Greta Thunberg, Balsena children decided to do awareness on the issue. For 3 Fridays in month of March, they did demonstration in some of the busy parts of the city in the evening. We were able to reach around 2500 people during these days. Balsena children learnt and explained others about climate crisis, and also encouraged people to take at least one oath, to do something to save the nature.

Part of Shaishav's work is to share it's learning with other organizations, who want to work in the same space. Shaishav has been providing guidance to Aataapi Sewa Foundation, located in Bharuch district, Gujarat. Team from Aataapi Sewa Foundation came to visit Shaishav and Balsena in month of March. They understood about concept of Balsena, its history, different content and tools that we use for Balsena. They also visited Balsena points, understood about Savings bank program.

Child participation is at core in all our work, hence it is very important for us to get feedback from children on their reflections and learnings during the year, and how they want us to improve. The children also help in creating the annual plan for the next year, for Balsena. In month of March, we did series of focused group discussions with children for both of this. Children shared that they learnt about child rights, identifying problems in their school and voicing out their opinion, learning about environment and implementing waste segregation system in their school. Children also shared that they would like to engage their parents more in Balsena activity, doing a tree plantation drive in their area, and working on removing addictions like alcohol, tobacco from their area. They identified that there are still few child labours in their area, and would like to work with them, and their parents and make them aware about child rights.

General elections in India are going on currently. Mostly children are all but forgotten as they do not cast votes. 4 children from Balsena had participated in a state level workshop in January, on Democracy, and making of an election manifesto with what children need. In April 8 representatives from children from Balsena and Tarunsena went to meet contestant of the major two party in our constituency, and presented them with our demand.

We aim to provide self-defence training Wenlido to all the girls in Balsena. Last year we trained 927 girls from age 8-19 years in an age appropriate manner. This April we held 3 more trainings with girls. 66 girls were part of these trainings.

As exam time is in April our day to day work with children slowed down. We used this opportunity to create annual plan for Balsena, and also plan for vacation camp, and train ourselves for the same.

P.S. : I have attached photos for the report. 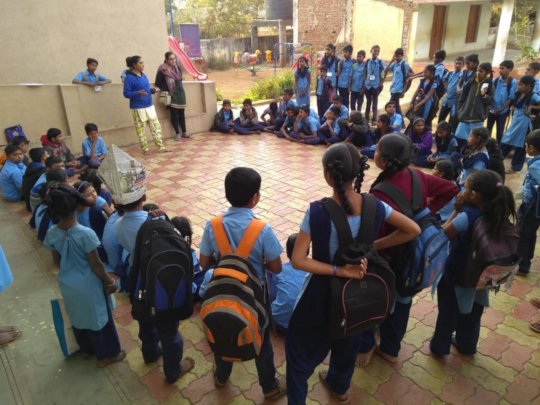 In the month of January and February 2019, Aaranyak team stayed at Pomlapada block, Narmada district in the project location and conducted Balmelas (children’s fair). Balmelas were on the themes of paper craft, science toys and body science, and cooperative games were used in between to create a fun and learning environment. Balmelas were conducted in Sejpur primary school and Almavadi girl’s school with strength of 51 and 113 respectively.

Other than Balmelas, Aaranyak team has spent a lot of time in interacting with people who have been working in the field of education, health and development sector. Michael, Mamta, Dr. Harishbhai and Chaulaben are few among them who have been working in these tribal areas since many years. They shared their insights about Aaranyak project which the team felt very important. Chaulaben, also participated in the brainstorming session along with Aaranyak team. The group discussed about the core values they would like to hold on in Aaranyak, do’s and don’ts at a personal level, their personal vision for Aaranyak and what they would like to do towards it. The whole idea of this brainstorming is to bring alive the collective vision for Aaranyak.

Apart from the regular activities, the team had an interesting experience during an unplanned day. The team decided to take a forest route towards Kaanjal which is the last village in the border of Gujarat and Maharashtra. The team ended up in a school of this village, during their assembly time. The team received good reception from the school teachers and asked if they can do some activities/games with children. It so happened that, the team which thought of doing couple of activities ended up doing complete Balmela with 110 children. Children thoroughly enjoyed the whole process and the teachers mentioned it would have been really good if we had informed them earlier. They would want to have Balmela with all the school children. In the midst of planned agenda, overwhelming response like this from a completely unscheduled event kindled new energy in the team.

Aaranyak is going to be an open learning space, where a lot of sustainable activities like organic farming, renewable energy, biogas, eco-construction, water recycling, rain water harvesting etc. will be practiced. These activities once practiced, will become a model to replicate in the nearby villages. To implement project at such a large-scale, Shaishav needs a land of about 10 acres in these areas. In the month of March, Aaranyak team has spent time looking for land for this project.

Watch this space for more updates on the project in the coming months. 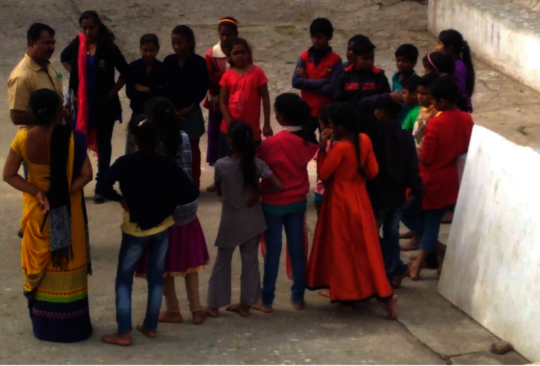 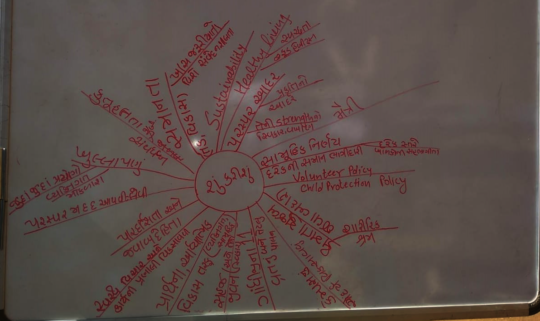 Aaranyak team brainstorming on core objectives
‹ 1 2 3 4 5 6 7 8 9 ... 28 ›
WARNING: Javascript is currently disabled or is not available in your browser. GlobalGiving makes extensive use of Javascript and will not function properly with Javascript disabled. Please enable Javascript and refresh this page.