Pamela's drug business is thriving thanks to WMI! 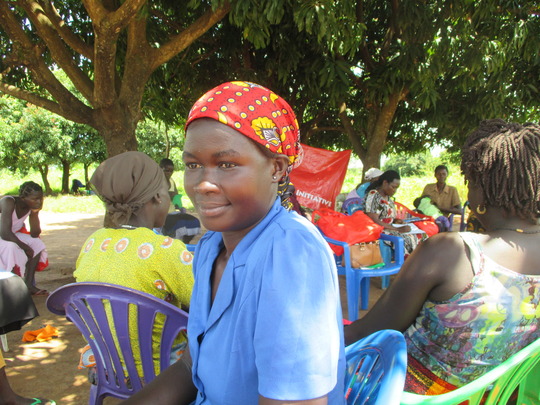 This is Pamela, who was trained and received her first WMI business loan in April 2012. With her loan she started a drug shop, and with each successive loan she has expanded her business --stocking a larger inventory of drugs. Of course, her business isn’t what you probably were thinking when you first saw the headline. A drug shop is the rural Ugandan village version of a pharmacy. Most operators have some medical training and are allowed to treat common illnesses such as malaria and AIDs. Pamela’s open air drug shop is located in Atiak, the site of the largest massacre by Joseph Kony’s Lord’s Resistance Army. In 1995, the LRA shot over 300 young men in the village, rounded up others and took many young girls as sex slaves.

Ravaged by a twenty year bush war, famine and subsequent under-development, life in Northern Uganda is difficult. Luckily, Atiak has begun to prosper as a result of trade and development in the new nation of South Sudan. The village sits on the main truck route between the capitals of Uganda and South Sudan. Atiak’s energetic women have profited from selling water and meals to the truckers, hotels and other businesses are cropping up and the village is beginning to look more prosperous. Last year, the local women contributed bricks and land to build a community meeting pavilion with the help of WMI funding. The pavilion provides a place for WMI borrowers to meet, learn and work out of the stifling sun or torrential rain.

In addition to her business Pamela has taken an active role in managing the local WMI hub. She has been a local coordinator, helping new borrowers with their businesses, collecting loan payments and keeping track of 40 borrowers! An English speaker, she also serves as a translator when non-speakers of the local dialect come to visit. Because Ugandan’s speak so many dialects, conversations must often undergo translations through English.

Pamela’s two children have also greatly benefited from her business. She is a role model for her children – something that you can’t put a dollar value on or count in a survey. As the women’s financial circumstances improve, they are able not only to better feed, clothe and educate their families; they are able to save for emergencies. Domestic violence is reduced.  Families are healthier and happier.  Children are educated and the vicious circle of poverty may be broken.  Women are becoming leaders in their communities. They are becoming knowledgeable advocates for themselves, their families, and their villages.  Their children are beginning to follow in their footsteps.

October 15 is a Global Giving match day! Please consider a donation to help other women in Atiak like Pamela.  Thank you so much! 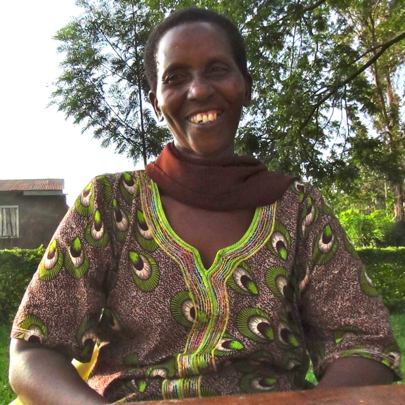 A cheerful and kind-hearted woman, Irene serves as WMI’s Deputy Assistant Local Director and has had a large role in shaping WMI over the past six years. One of WMI’s pioneer borrowers, she also volunteered to help organize her group members (borrowers work in groups of 20).  Later she was selected to participate in a Training to Train program where she learned how to train others. Now WMI’s head trainer, Irene has worked to educate new borrowers about business skills, managing small businesses, writing records, making a budget, and more.  Through this training and resulting business success, gender relations and living conditions have improved.  Irene explains, “Women are now empowered. Where there is WMI there is a change. Women are not shy like they used to be. They are happy!” Women are also able to contribute more to their households, which has improved relationships in the village.  Using her hands to demonstrate that husbands and wives have come closer, Irene observes that “when you over depend on somebody you become a body. But now when you are also contributing, that relationship—you become close, you are close to each other.”

In addition to healthier relationships, Irene tells us that the members of the community are physically healthier since she began taking loans with WMI. “Buying clothing for children, feeding, everything was very difficult.”  WMI has helped rural Buyobo, Uganda develop and will continue to do so.  It gave Irene the tools she needed to move out of poverty and she willingly works to make the same possible for other women across Uganda.

Irene has changed her business several times since taking her first loan in 2008 and this new business has become more profitable.  While she was originally selling second hand clothes, her second WMI loan enabled her to introduce shoes to her business. By the third cycle of the loan program, Irene used her profits and the loan money to switch to selling produce.  Now, having graduated from the two year program, Irene can self-finance her business and is also pre-approved at WMI’s partner bank to take commercial loans as she needs them.

Irene has noticed a great improvement both in her own life and in the community since WMI began due to increased access to education.  Irene’s daughter recently graduated from University and she has another daughter who is graduating in August.  She also has children in primary and secondary school. “Had it not been for WMI,” Irene says, “I think I wouldn’t have any money. The little salary I get [from teaching alone] is not enough to pay for University.”  This sentiment is echoed throughout Buyobo—many women use their profits to pay school fees for their children.  Irene is not alone in saying “education is number one. I give it priority.”

Despite the value women place on educating their children, paying for school fees is not always easy.  Most men are farmers, Irene explains, so the local economy is very dependent on coffee.  Since coffee is harvested in the fall, paying school fees in January is generally not a problem for most families —however, Irene notes, “when the season is over, we go back to our poverty.”  Women who have businesses they started with WMI loans tend to have more savings and a more constant source of income, and have less difficulty paying school fees for the second semester.  Through its sustainable impact on education, Irene feels that “WMI has helped not only Buyobo, but Uganda as a whole. Because if I educate my child she can work anywhere in Uganda…as you educate the child you are investing in that child. With time you get the fruits!”

Irene’s daughter is now searching for a scholarship to continue school and explore the world. “We do not want them to end where we have ended. They will reach beyond!”

The Onion Queen of Buteza 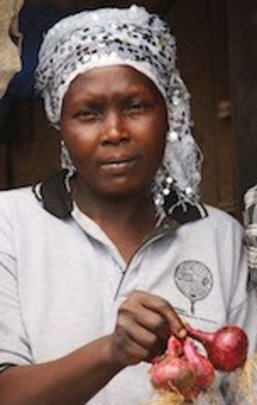 The Onion Queen of Beteza

A recent article in New Vision, a Uganda daily newspaper, proclaimed: “Uganda’s Onion Production Too Low.” The article urges Ugandan farmers to capitalize on the current demand for onions. “Onions are on demand because of the various advantages, but our production does not even reach half of what is required.” Deep in rural northeastern Uganda, surrounded by steep mountains covered in thick vegetation rising from the fertile soil, is Buteza village.

This is where you will find The Onion Queen of Buteza – a borrower in the WMI program. She plants and harvests thousands of these purple bulbs each year, selling them to neighbors, traders and townspeople. Uganda is blessed with two growing seasons, so she harvests twice a year, once in the winter and then again in the summer. After harvesting she stores her onions and waits until the perfect time to sell. Late in the growing season, when the current crop is not yet ready and the local supply of onions from the previous harvest has dwindled, she opens her stores and sells her onions at a higher price. The Onion Queen of Buteza did not have to read the New Vision article to know that onions are a sought after crop that stores well. As a savvy rural businesswoman armed with a WMI loan, she has developed a comprehensive understanding of the fluctuations of the local market, the needs of the local consumers, and advantages of her crop.

WMI is frequently asked why we do not train women in creating handy-crafts for export to the United States. Paper wallets, hand-woven African baskets, colorful-beaded jewelry and other handy-crafts are all staples of the non-profit-supported African export market. Non-profits identify products for participants to produce for export, provide loans and training to develop the business, and then create the export chain. Although this is a common model, WMI’s program encourages women to choose their businesses based on their skills, contacts, and the dynamics of the local economy.

The Onion Queen of Buteza knows that onions are a stable crop to invest in because not only are they hearty and can be stored for long periods of time, but also because they appeal to the local consumer and are affordable. There is an immediate customer base for onions; The Onion Queen does not have travel across the ocean to find a market for her goods. While there is a huge variety in the businesses that WMI borrowers own, they all have one thing in common: they are producing goods that cater to the everyday needs of East Africans.

Cultivating local markets is an integral step in building strong economies in the developing world. The WMI loan program not only helps individual women raise the standard of living for themselves and their families, but the program also supports the rural economies that are the backbone of East Africa’s larger economy.

Next Wednesday, May 7 is Bonus Day.  Contributions up to $1,000 will receive a 30% matching beginning at 9 am EST. $75,000 is available! Please make a donation to WMI to help borrowers like the Onion Queen of Beteza. Thank you!!

‹ 1 ... 7 8 9 10 11 12 13 14 ... 19 ›
WARNING: Javascript is currently disabled or is not available in your browser. GlobalGiving makes extensive use of Javascript and will not function properly with Javascript disabled. Please enable Javascript and refresh this page.