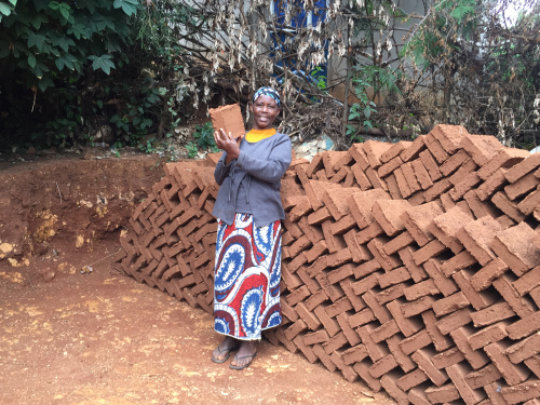 Tecla and her Brick Factory

Mud, a little ingenuity, some perseverance, and a small loan from WMI are the four ingredients Tecla needed to make her thriving business.  After two years in the loan program, borrowers like Tecla in Tloma village, Tanzania are diversifying and expanding their businesses to improve their earning potential and household living standards.

Tloma lies close to the rim of the Ngorongoro Crater, where women trace their ancestry back to the Iraqw tribe that inhabits this region. While the Iraqw have their own traditional language, many in Tloma have adopted Tanzania's national language and speak Kiswahili, reflecting the relatively progressive nature of the Tloma community. Because the village is less isolated, the community is more integrated with the country's overall development (compared to more traditional tribes like the Maasai); nevertheless, most families are extremely poor, living on an average household income of less than 50 cents per day.

Typical families engage in subsistence agriculture (maize, beans and soy beans) and raise livestock for home consumption and sale. Tloma's economy is active, which means the women in WMI's program have some experience buying/selling of goods. Their problem was access to capital to expand their businesses. With spirit and determination the ladies welcomed the WMI loan program as their opportunity to change their lives.

So where does the mud come in?  Tecla used her first loan to open a shop in Karatu town, near the village. She trained her sons to help her early on, and that proved to be an important decision when she started another business and was able to leave day-to-day shop operations in her children’s hands.

Once Tecla had made some money from the shop, she was excited to start expanding her house. She started making bricks in her backyard for the construction, and it occurred to her that she had enough natural resources there to make extra bricks and sell them. Now she focuses on the brick business – she sells 10,000 bricks every dry season – while her children serve customers at her shop.

Most homes in the village are made of mud, cow dung, and sticks, but Tecla now lives in a brick house built with her business profits.  Seeing her house, Tecla's neighbors are buying her bricks to build their own houses, which they can now afford because of the loan program!

Tecla is the perfect example of how a small loan and some training, combined with ingenuity and perseverance, levels the economic playing field for so many women.  It doesn’t always take millions of dollars and an army of international aid workers to make significant and long lasting progress in improving the lives of disadvantaged women in East Africa. WMI capitalizes on your donations by directing its resources to a permanent loan pool.

When Tecla repays her loan there is another woman ready to take a loan and start on the path to economic success.  Her business will mean improvements to her family’s health, nutrition, and education – the three essential factors to sustained change.  Won't you help more women like Tecla realize their dreams? 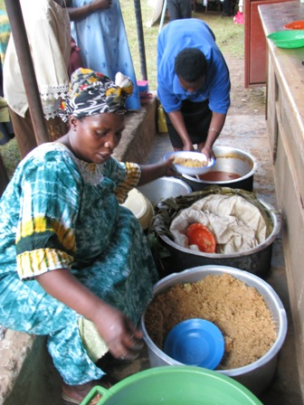 Kamida at her Restaurant

Kamida lives in a rural village in Northeast Uganda called Buyobo.  She was born in the village and is the proud mother of four children - two teen-agers and two at University.  Ten years ago the thought that she might be able to send her children to university would have never entered her mind.  In 2008 Kamida became one of the pioneer borrowers in the newly launched Women’s Microfinance Initiative lending and training program.  Before becoming a borrower, Kamida was running a restaurant in a very small rented space in a building along the main road.  She also sold fresh produce, beans and maize during their respective seasons to help ends meet.  She made around $30 a month.

Since joining WMI, Kamida has used her successive loans to buy land for her own restaurant building. She now operates a larger restaurant out of a building she owns and has a monthly profit of around $125. With her increased income, she is able to easily pay her children’s school fees. Because of the loan program, Kamida no longer needs to pay rent and can use the extra money to expand her restaurant business.

Kamida has an astute sense of the demand for her business and adjusts the amount of food she prepares accordingly to save costs. She understands that during the school holidays, many of the students go back to their respective villages, which reduces the amount of restaurant customers, and she in turn reduces the amount of food she prepares to keep her business running smoothly. At her restaurant, Kamida employs two workers to help serve her customers and prepare and cook food.

Through the training WMI provides, Kamida learned about best business practices and how to save and budget.  She saves about $60 per month which has resulted in many improvements for her home. Aside from being able to fully pay her children’s school fees, she is also able to provide better medical services and treatment for her children. Additionally, Kamida has bought a dairy cow which has become another source of income. Kamida also keeps her books daily. In the morning she records the ingredients and supplies she has purchased; in the evening she balances her books and calculates profits.

In order to continue business expansion, Kamida is a member of a WMI Jumbo Loan Group ($500 loan). Kamida believes that her business will expand in the coming years through the continuing help of the WMI Jumbo Loan program. She is hoping that she will soon be able to open up a retail shop with her savings. Won’t you help her succeed? Please support Kamida and the other women of WMI!

The Loan is Arranged! 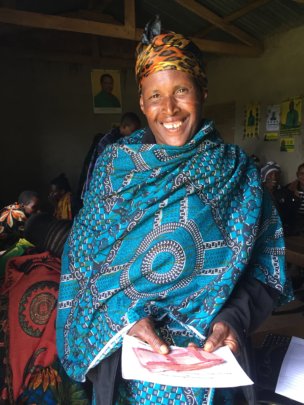 When the WMI team arrived in Buger village, Tanzania on loan day the borrowers there were already standing and singing to greet us. They sang “mkopo ni mpangalio,” which translates loosely to “the loan is arranged.”  It’s a song written by loan program members that expresses the borrowers’ excitement to receive their loans. Having heard the song before at our seminar for the group chairwomen, we jumped right in and sang along.

We started with loans for a new group that is starting this cycle. These borrowers had spent the previous week preparing. They attended a GWOCO/WMI seminar with Esther, the loan program educator, and learned about small business dos and don’ts. Then they wrote their loan applications and business plans with the help of Eliminatha, the GWOCO Secretary.

The staff read the business plans before agreeing to give out loans to the new borrowers. We were very impressed: one woman who will be buying and selling chickens thought to put down medicine for her livestock as an expense. This kind of active planning will enable her to foresee potential costs and prepare to meet them. It will also make it easy for her to pay off her loan!

The continuing borrowers in the program were excited to move on from their 300,000 shilling loan to 400,000 shillings (an increase of about $50). In their follow-up applications, they gave various ideas for the use of the new funds. Some plan to branch out into other businesses, while others want to improve their stock and still others want to start selling their products regularly in town, rather than only at the bi-weekly market.

Before receiving a new loan or a follow-up, every borrower fills out a survey. This enables us to keep track of how the loans are helping them to improve their lives, communities, and status as women.

We are often asked: Has the loan had a positive impact on your community? How?

Most women said that it was easier to access services in the community. When service providers like health care workers and water companies learn that a community’s income is rising, they are willing to make greater investments in that community. Although this loan hub is new, the loan program’s impact on community development here is mimicking WMI’s amazing results in Uganda, and we couldn’t be happier about it!

‹ 1 ... 4 5 6 7 8 9 10 11 ... 19 ›
WARNING: Javascript is currently disabled or is not available in your browser. GlobalGiving makes extensive use of Javascript and will not function properly with Javascript disabled. Please enable Javascript and refresh this page.