10 Years of GlobalGiving in the UK: £10M donated in GBP 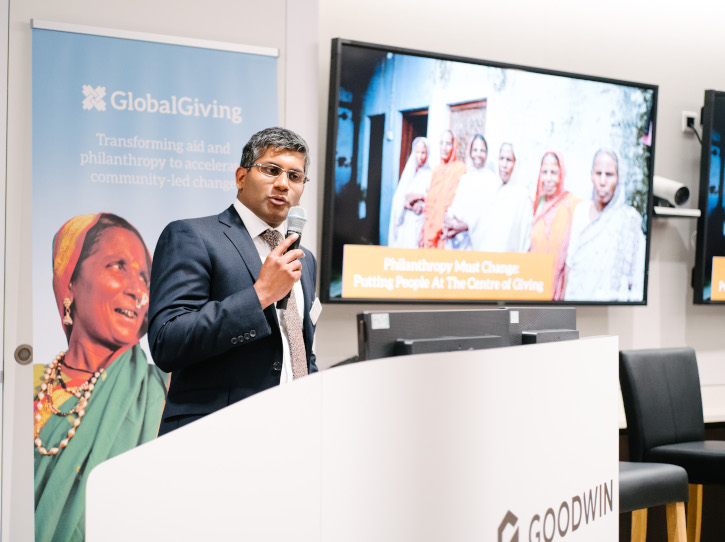 Featured Photo: Shawn D'Aguiar, Chair of the UK GlobalGiving Board of Trustees and a partner at Goodwin Law, addresses guests of the 10th anniversary event, “Philanthropy Must Change: Putting People at the Centre of Giving,” at the Goodwin Procter London office.

GlobalGiving’s UK-based team have been at the forefront of influencing a more transparent and bottom-up approach to aid and philanthropy. Having a continuous presence in the United Kingdom for a decade has enabled GlobalGiving to establish itself as the largest crowdfunding community for nonprofits, donors, and companies in the world. GlobalGiving UK has been supported by DFID, Nominet Trust, and National Lottery Community Fund. It has also established close relations with UK and European companies delivering successful grantmaking, skilled volunteering, disaster relief ,and company giving programmes, benefiting hundreds of nonprofits around the world. GlobalGiving’s UK charitable status has allowed UK taxpayers to add 25% to their donation through the Gift Aid scheme.

“Ten years ago, when we set up GlobalGiving UK, crowdfunding wasn't even a term anyone was using in relation to fundraising. The landscape for digital fundraising has changed enormously over that time,” said co-founder and GlobalGiving UK Executive Director Rachel Smith.

“What hasn't changed is our focus on decentralising philanthropy and aid to ensure the needs and priorities of the community are front and centre. I’m excited by GlobalGiving's continued desire to innovate our model, to seek evidence on how and why the community-led approach is powerful, and to share our learning so we can transform how philanthropists, funders, and social changemakers work to put people first,” Smith said.

On March 13, GlobalGiving UK held an event, “Philanthropy Must Change: Putting People at the Centre of Giving,” at Goodwin Procter London office to mark their 10-year anniversary. Partner charities, donors, corporate partners, and the third sector all joined to mark the special occasion. A vibrant panel addressed the need for funders to be more accountable to community needs, and whether they should take more risks to better respond to these needs.

Smith, who is featured in this article, is available for interviews. To learn more about how GlobalGiving connects nonprofits, donors, and companies in nearly every country around the world, visit www.globalgiving.org or call +44 20 7242 8079.

GlobalGiving is the first and largest global crowdfunding community for nonprofits. GlobalGiving makes it safe and easy for people and companies to give to local projects anywhere in the world, providing nonprofits with the tools, training, and support they need to become more effective. Since 2002, GlobalGiving has helped raise more than $345 million from more than 800,000 donors and 260+ companies for more than 20,000 projects in more than 170 countries. GlobalGiving and its volunteers and partners have provided tens of thousands of hours of workshops, webinars, and online tools and resources to maximize the impact of those funds. The GlobalGiving team consists of 57 professionals in the US, UK, India and China, and is led by a management team with experience that spans the technology, international development, financial services and nonprofit sectors. GlobalGiving is the only crowdfunding community that integrates vetted nonprofit organizations, donors, and companies in a robust, high-value, global circle of giving that drives social change.