May has been an exceptionally busy month for us. We continue to make strides in matters of justice and accountability for Yezidis. At the same time, our social enterprise programs in Iraq have been busily hosting local customers and notable diplomats. Sugar is Sweet café even catered a large event this month!

Please read on for our most current news. 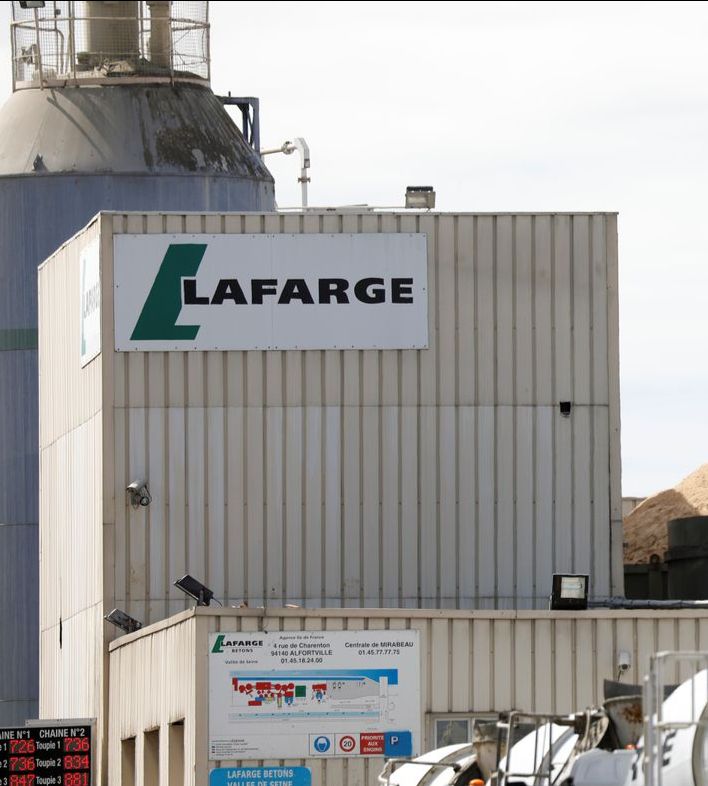 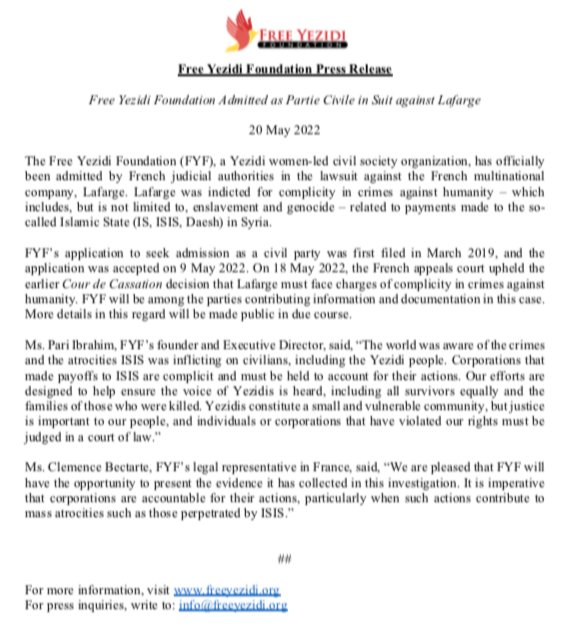 The French multinational company, Lafarge, has been indicted for complicity in crimes against humanity. French judicial authorities have officially admitted FYF in the lawsuit against Lafarge.

FYF’s application to seek admission as a civil party was first filed in March 2019. Our application was formally accepted on May 9th, 2022. We will be among the parties contributing information and documentation in this case. Charges against Lafarge include, but are not limited to, enslavement and genocide, which are related to payments made to the so-called Islamic State (IS, ISIS, Daesh) in Syria.

“The world was aware of the crimes and the atrocities ISIS was inflicting on civilians, including the Yezidi people. Corporations that made payoffs to ISIS are complicit and must be held to account for their actions. Our efforts are designed to help ensure the voice of Yezidis is heard, including all survivors equally and the families of those who were killed. Yezidis constitute a small and vulnerable community, but justice is important to our people.”

A link to our statement can be found here. 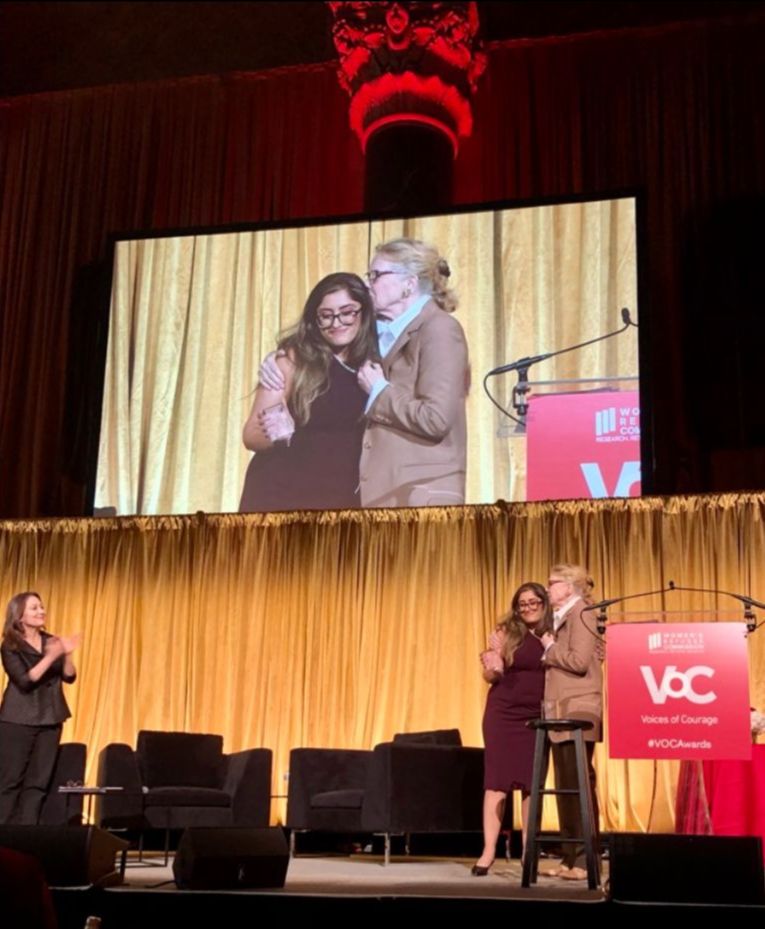 On May 3rd Pari Ibrahim, FYF’s Founder and Executive Director, was honored by The Women’s Refugee Commission with the Voices of Courage award. Pari was delighted to receive the award, presented to her by WRC founder and renowned actress Liv Ullmann.

During the awards luncheon at in New York City, Pari spoke about her role founding FYF, the work the organization has done since the Yezidi Genocide in 2014, and the future of the Yezidi community in Iraq.

With over 350 attendees at the event, it was a wonderful opportunity to share the work of FYF.

FYF PRESENTATION AT COUNCIL OF EUROPE HEARING IN PARIS 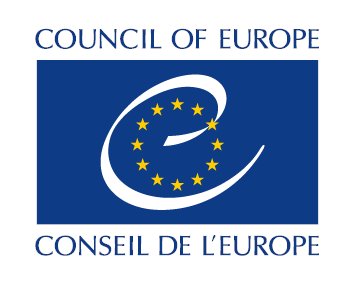 FYF was invited to appear at a Council of Europe hearing on justice and accountability for foreign ISIS members, particularly those coming from European countries. FYF’s Lead Lawyer, Naomi Prodeau, delivered the speech below and answered questions posed by Council of Europe members on this important topic.
The full speech, presented by Ms. Prodeau, can be found here.
SUGAR IS SWEET CAFÉ SELECTED TO CATER EVENT AT NAWROZ UNIVERSITY 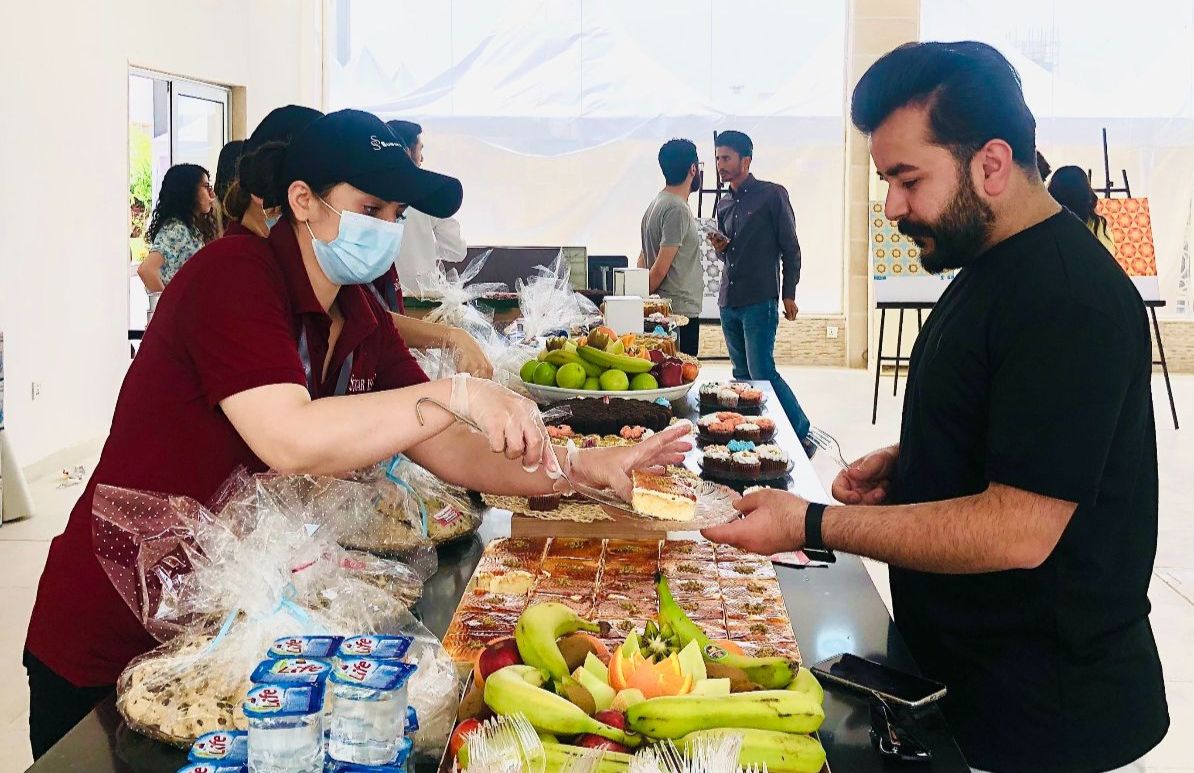 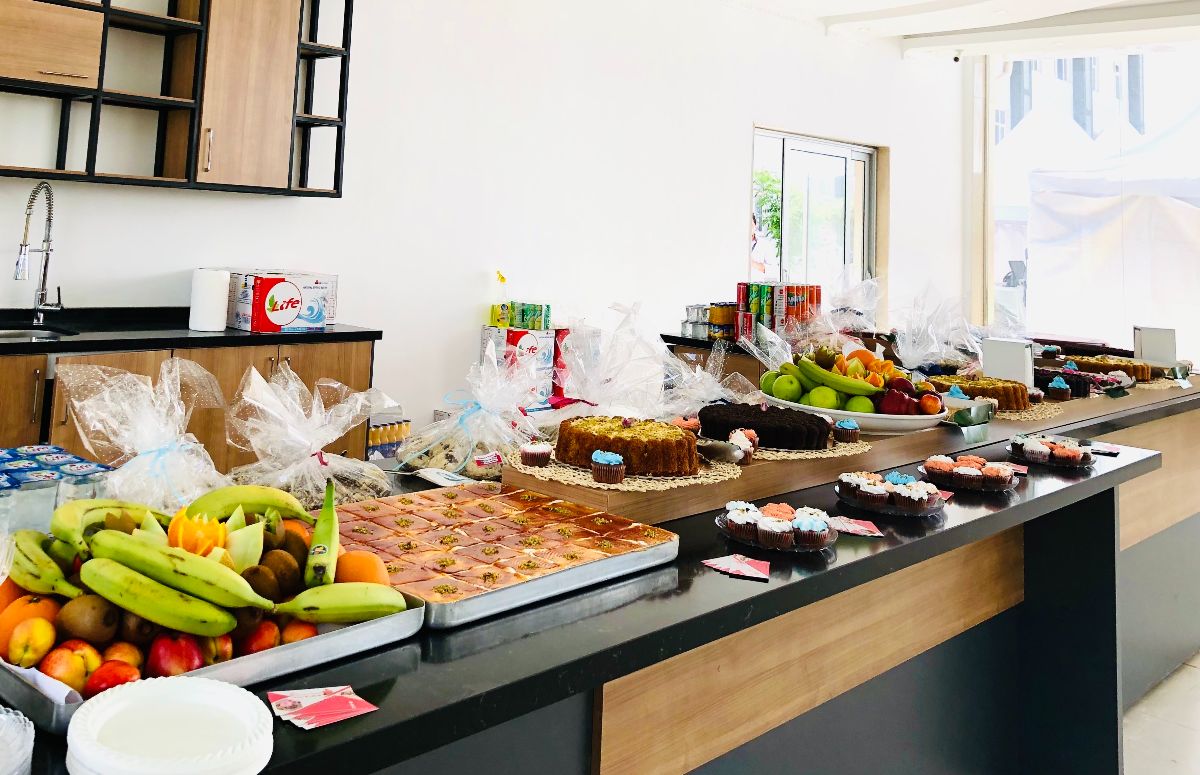 Chosen to provide a dessert and drink buffet at the competition, five hard-working team members from our Bakery and Training Center were pleased to serve some of the bakery's specialties.

In Iraq, Yezidis have suffered greatly from discrimination and prejudice. Many people refuse to eat food items made or handled by Yezidis due to prejudice and discrimination. FYF is committed to pursuing a different path with friends and allies in Iraq. Coexistence and acceptance will be necessary for the next generations.

We urge all Iraqis from different ethnicities and components to reject anti-Yezidi discrimination and treat the Yezidi community equally. In that regard, we were very pleased to provide fresh, hand-made catering at the Nawroz University event, and we applaud them for selecting us.

The Sugar is Sweet café team members look forward to working with friends and allies in Iraq and the Kurdistan Region who view Yezidis with respect and treat us as equal citizens.
NO HONOR IN ‘HONOR KILLING’ 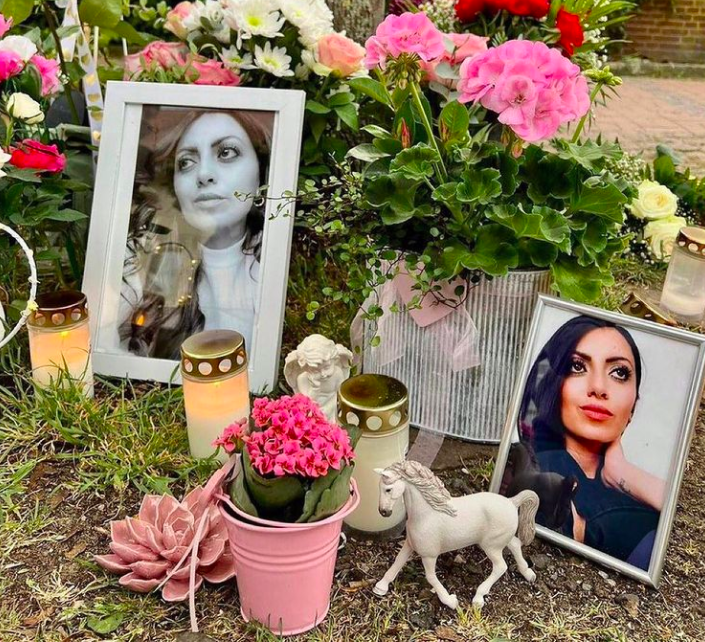 Earlier this month a Yezidi woman was murdered in a so-called 'honor killing’. She was stabbed 15 times on a street in Germany.

In many Middle East societies, women's rights are not properly respected. In this case, it is reported that the woman was seeking a divorce, and she was then murdered by her husband. It is critical that communities in the Middle East adopt international norms for women's rights.

FYF advocates unreservedly for the rights of women and we are compelled to speak up to combat violence against women in any and all forms wherever it may occur. This victim in Germany leaves behind two children.

The Yezidi community will become much stronger and much more effective if we adopt international norms on gender issues, eradicating violence against women in all forms and at all times. 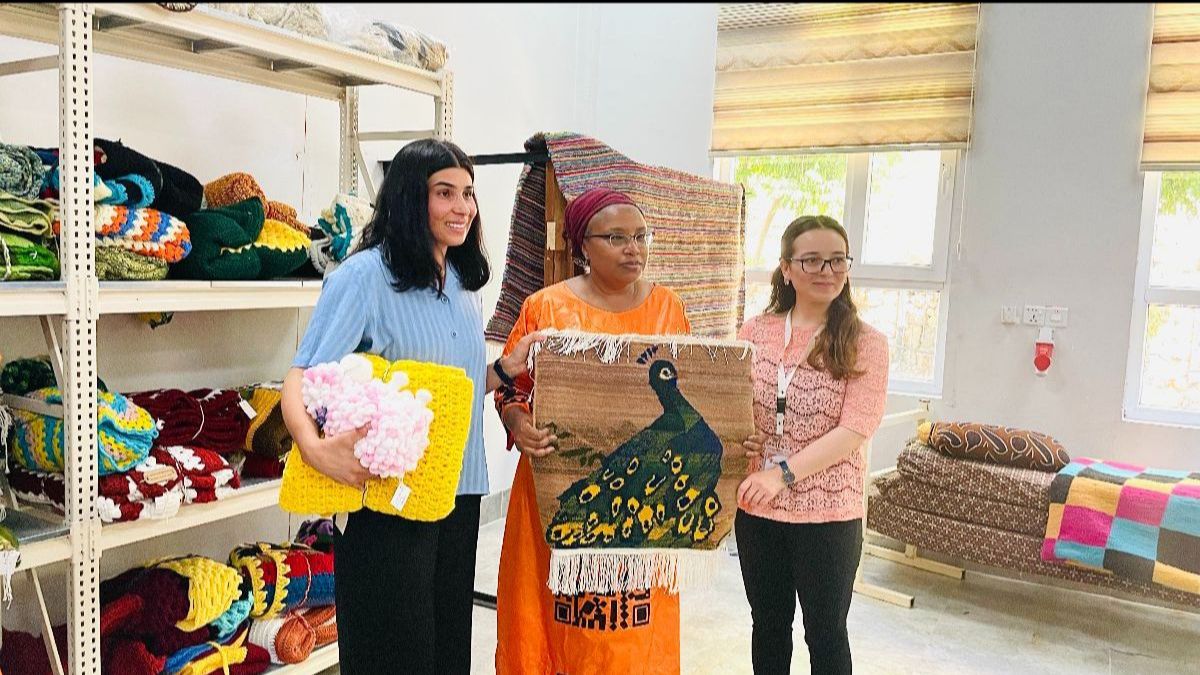 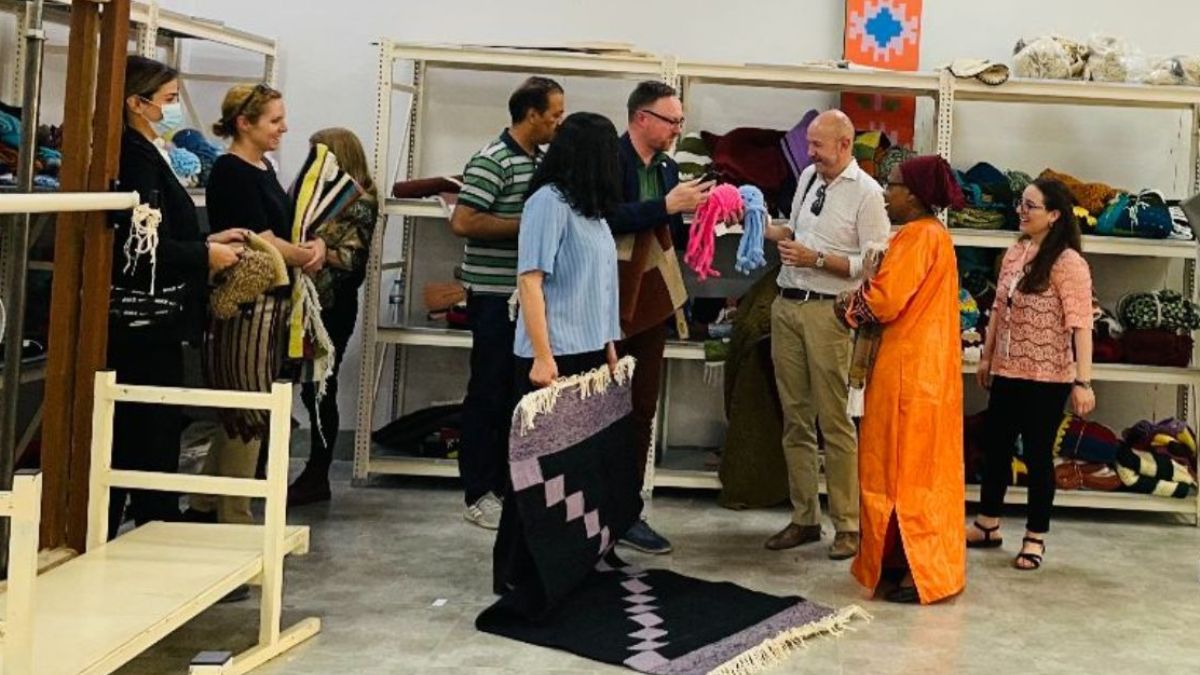 We were delighted to host Ms. Alice Wairimu Nderitu, Special Adviser to UN Secretary General on Genocide Prevention, the Head of UNITAD, Mr. Christian Ritscher, and their delegation at the FYF Enterprise & Training Center and the Sugar is Sweet café. The delegation learned about FYF efforts to provide opportunities for Yezidis and to combat discrimination against the Yezidi community.

While Turkey blocks the admittance of Finland and Sweden to NATO, it continues to commit violations within their own country and in Iraq and Syria. Their crimes include the bombing of survivors of the Yezidi Genocide in Sinjar. Turkey has been a harbor and pipeline for terrorists for years, giving particular support to al-Qaeda and ISIS, so the condemnation of human rights leading countries such as Sweden and Finland are highly hypocritical. The Free Yezidi Foundation calls upon all NATO member states to prevent ISIS members from re-establishing operational footholds in the Middle East.
FYF HOSTS NETHERLANDS TRADE MINISTER 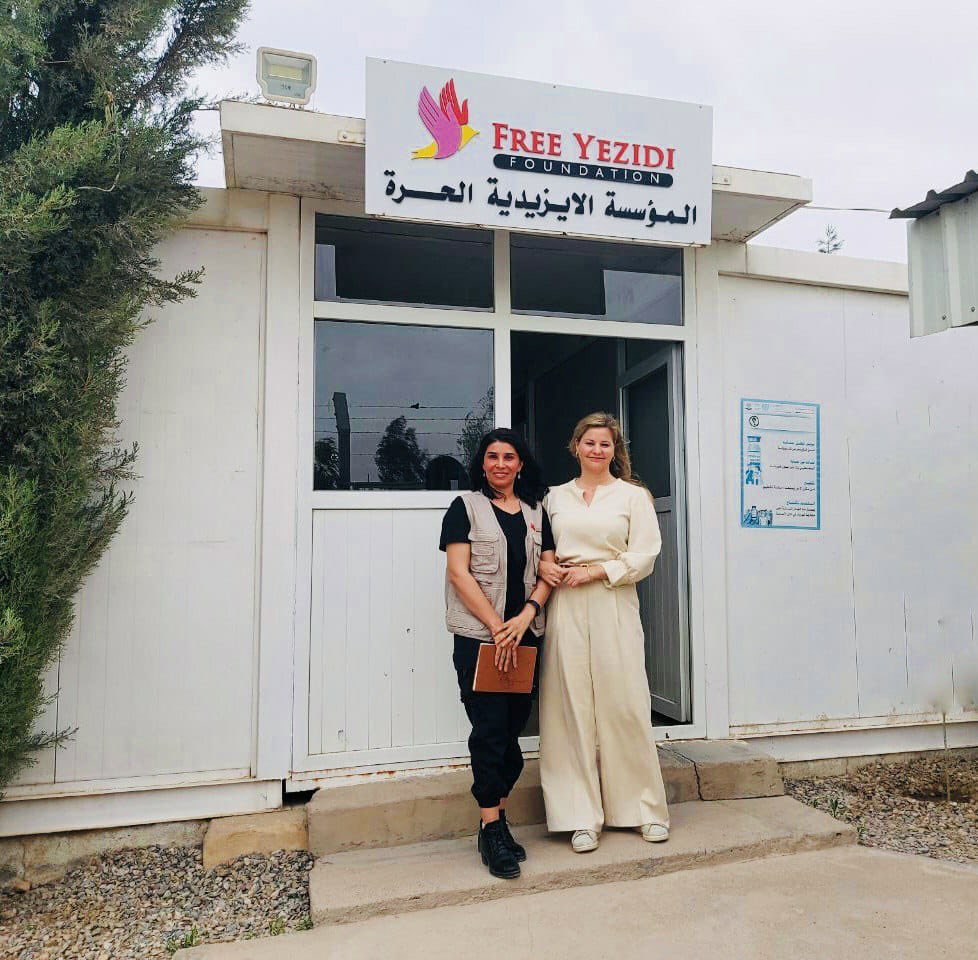 It was our pleasure to host Ms. Liesje Schreinemacher, Dutch Minister for Foreign Trade and Development Cooperation, and representatives of the Netherlands Embassy - Baghdad and the Consulate General - Erbil at the FYF center. FYF team members explained the Yezidi situation and the need for recovery, justice, and support for Yezidi civil society.
CONFLICT IN SINJAR LEADS TO FURTHER YEZIDI DISPLACEMENT
Conflict among militias in Sinjar led to significant displacement of Yezidis in early May. There is no justification for any military assault against Yezidi citizens of Sinjar. FYF and other Yezidi activists reject internal or external military attacks and efforts expel them.

As of May 5th, another 1,711 families (10,261 individuals) have been displaced, crossing to Duhok from Sinjar, Iraq. Many of these individuals must now return to IDP camps once again.

It is noteworthy that the Iraq government has repatriated 448 Iraqi households out of Al-Hol, an IDP in Syria. If these families can be reintegrated into Iraq, Yezidis in Sinjar should certainly have the opportunity to live peacefully within the Iraqi state. The human rights of all Iraqi citizens must be the top priority.
DID YOU KNOW?

FYF board member Nibras Basitkey just graduated with top honors from Creighton University’s Heider College of Business! Nibras is a great example of a young, talented, energetic Yezidi woman with a bright future ahead of her. We are so proud of her! 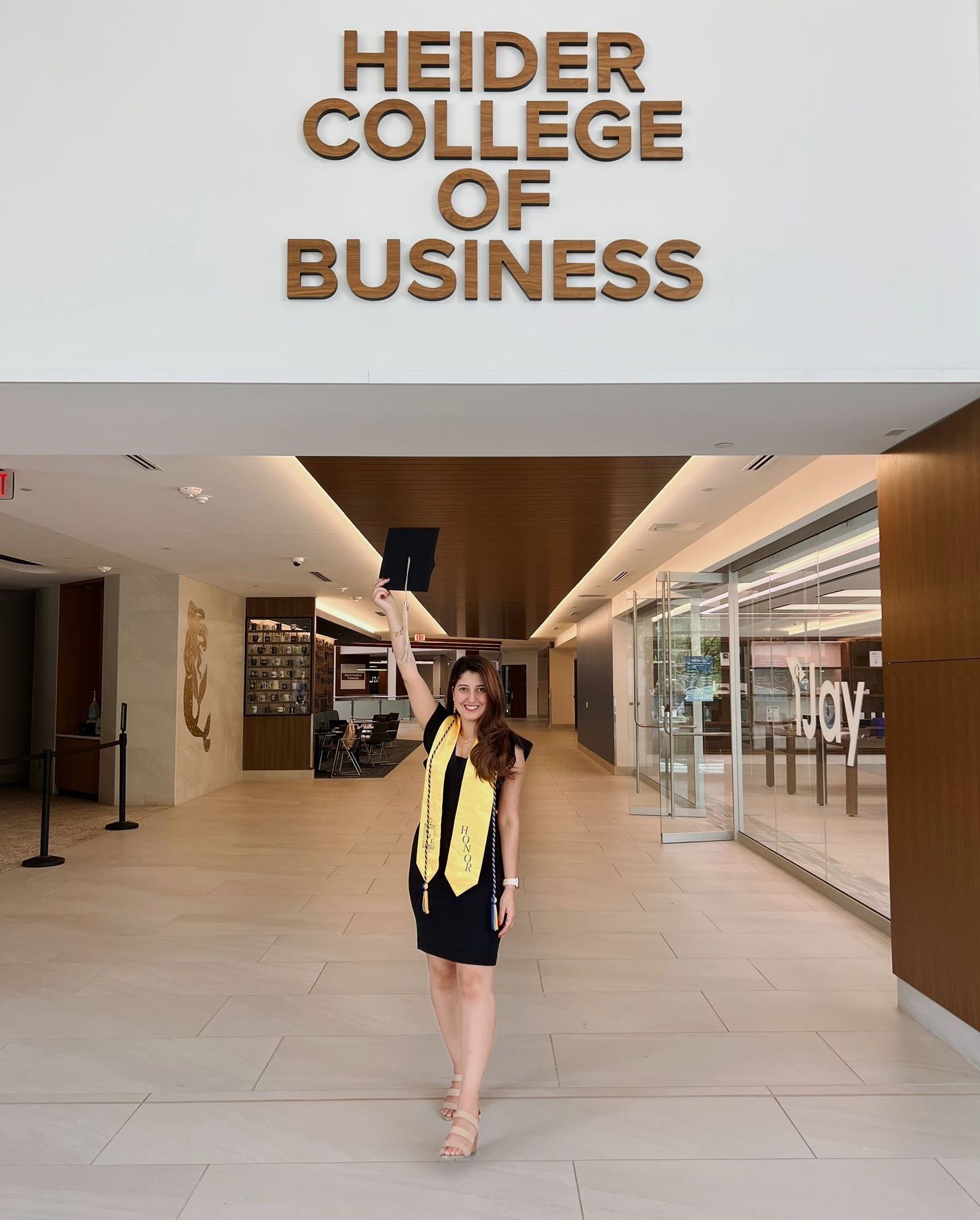 Thank you all, as always, for keeping up with our news and work, and for your steadfast support of FYF and the Yezidi community.
Sincerely,

Rudaw | Over 3,000 people flee Shingal due to latest clashes | Ongoing clashes between the Iraqi army and YBS members in Shingal have led to the displacement of thousands of residents to the nearby province of Duhok.

Kurdistan 24 | Property damage prevents the return of Sinjaris | Clashes erupted again between the Iraqi army and a local Yezidi group, forcing over 10,260 people from their homes, many for the second or third time.