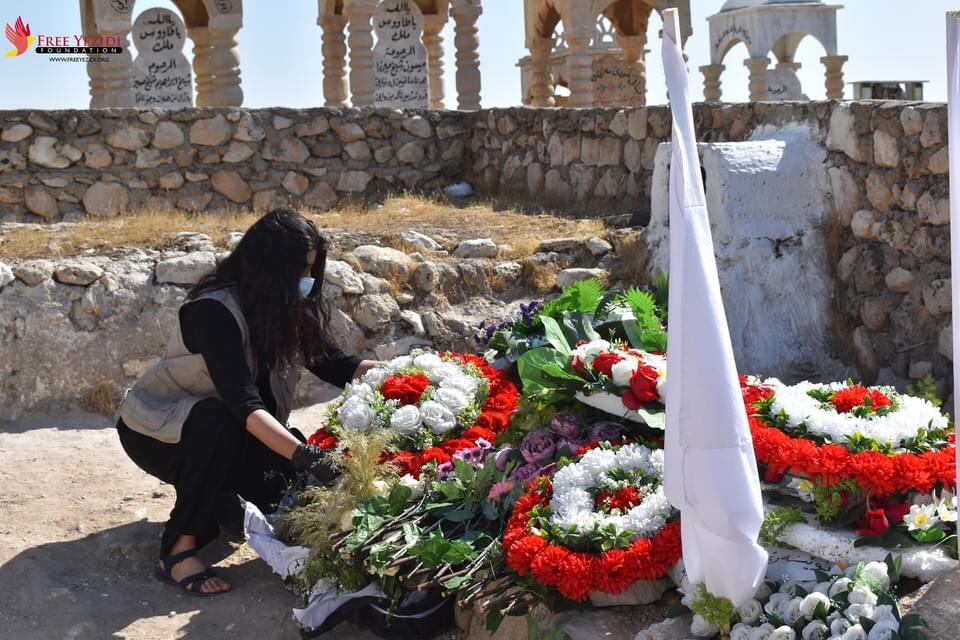 This month Yezidis mourned the loss of the Yezidi religious leader and beloved head of the Yezidi Spiritual Council, Baba Sheikh Khurto Haji Ismail. Baba Sheikh was a forward-looking and transformative leader in the community in various ways. The Free Yezidi Foundation holds the late Baba Sheikh in the highest regard. See our statement here. FYF country leadership visited the final resting place of Baba Sheikh and paid a courtesy visit to his family and members of the Spiritual Council. He died at age 87 due to health complications. 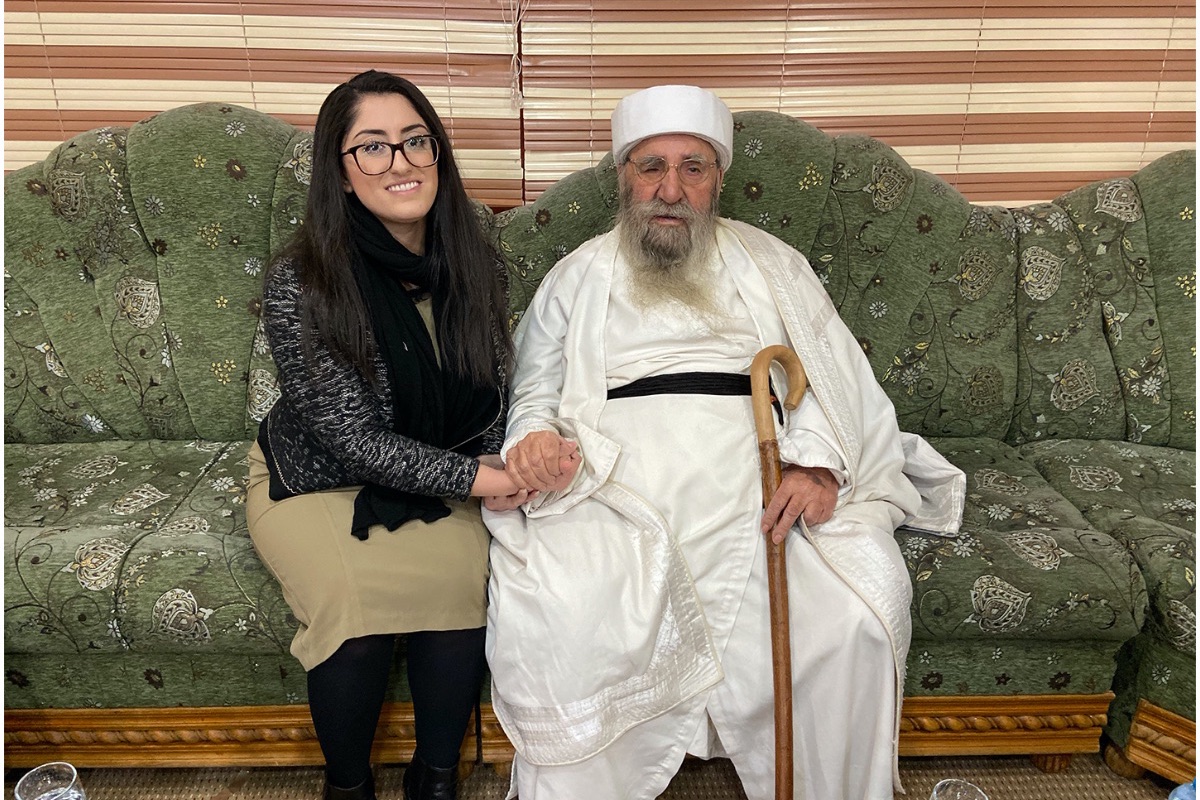 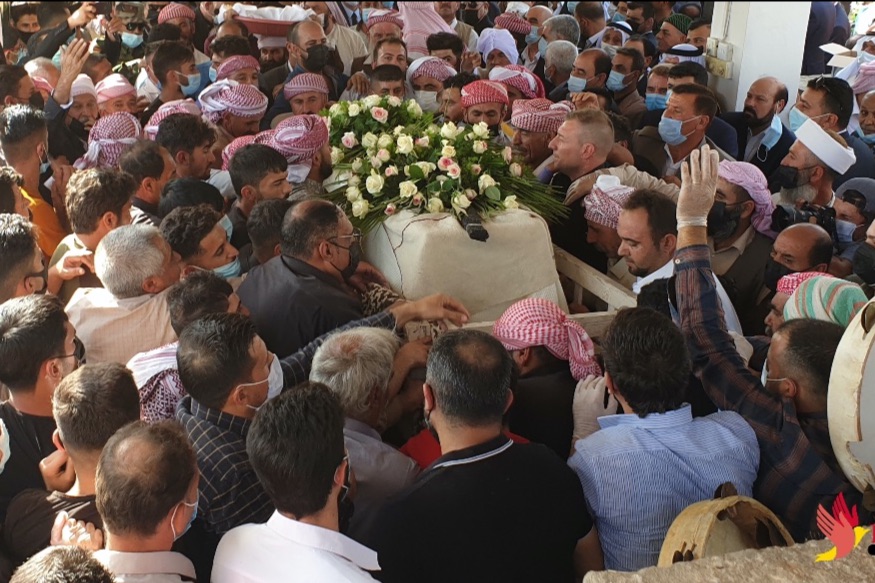 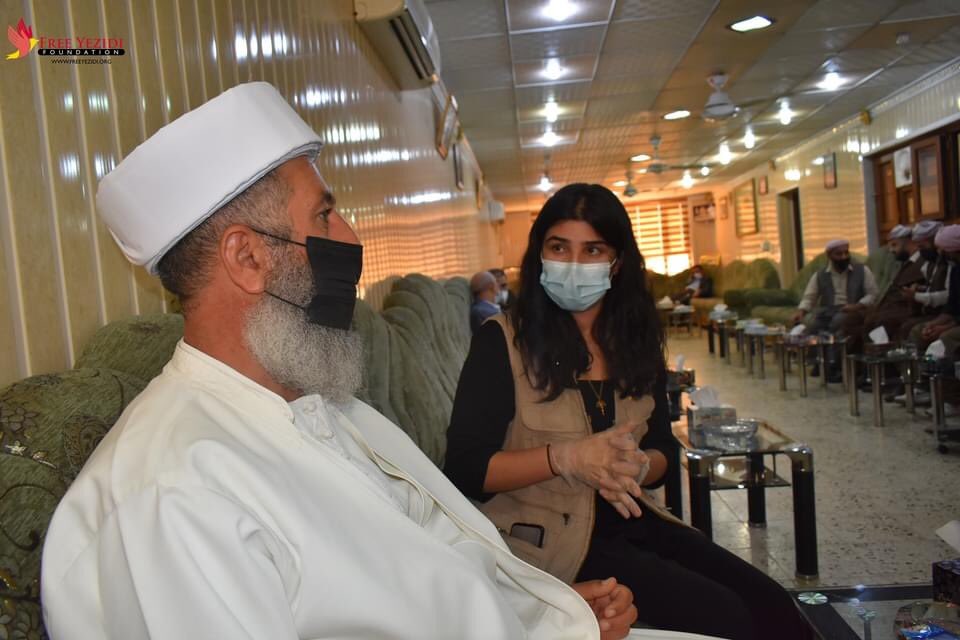 FYF has been providing law enforcement agencies, governments, and the general public with information and reports regarding ISIS members, including female ISIS members. A number of female ISIS members or associates have sought to portray themselves as victims, despite their participation in a genocidal, mass-rape terrorist organization. FYF has noted that in many cases, the behavior of female ISIS members was even worse than men, and their crimes facilitated and ensured atrocities committed against Yezidis and others. FYF believes that justice for members of genocidal, terrorist organizations should not depend on gender but on the decisions and actions taken by individuals.

This month, Omaima Abdi of Hamburg, Germany was sentenced to prison on four criminal counts, including one count of owning a Yezidi 'slave'. When she tired of her life in the ISIS Caliphate, she returned home to Germany, and resumed her life as though nothing had happened. However, a journalist found her phone in Syria, which included evidence of her criminal behavior with ISIS. We are grateful to the German prosecutors for ensuring that she faced justice for her crimes. Here is our statement about Omaima Abdi (pictured below in court). To see the FYF statement on Omaima Abdi, click here.

In the Netherlands, Laura H was convicted in criminal court as an accomplice for the preparation of terrorist actions. Shockingly, she has developed a platform to write a book and a play about her life. The Free Yezidi Foundation strongly rejects the attempts of current of former ISIS members or accomplices to profit from their experience with a genocidal organization like ISIS. To see our full statement, click here. 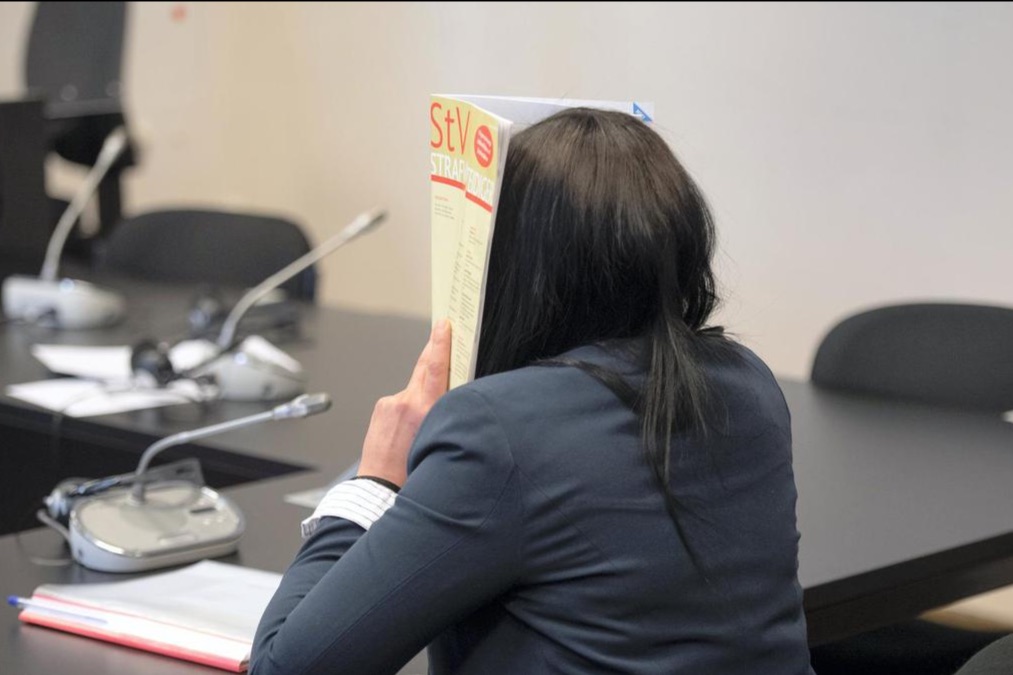 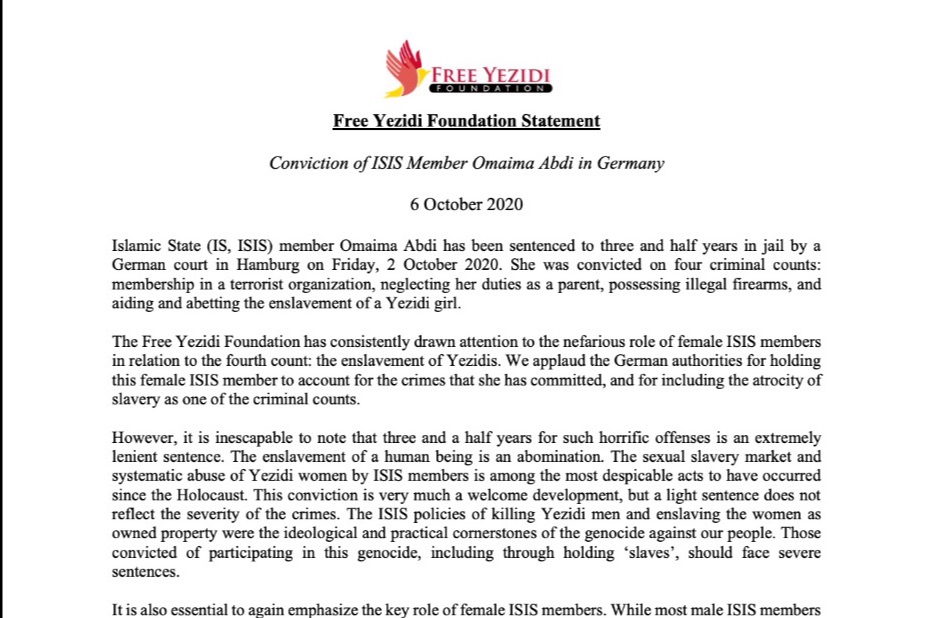 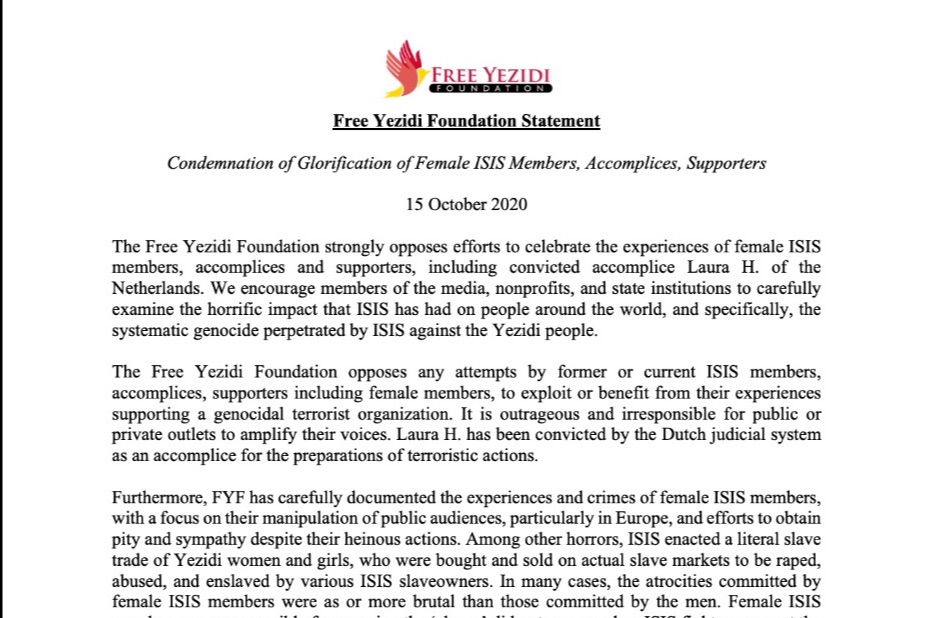 FYF issued a number of initial observations and notes on the much-publicized agreement between the Iraq and KRG governments about the future of Shingal. To see the full thread, click here. FYF also worked with other Yezidi community leaders, intellectuals, and civil society organization to support a joint statement that both supported attention to the reconstruction and rehabilitation of Sinjar while underscoring Yezidi concerns on some important elements of this process. As a non-governmental organization, FYF avoids political involvement, but maintains a clear voice in matters pertaining to human rights and the humanitarian needs of the Yezidi people.

Separately, the conflict between Armenia and Azerbaijan has unfortunately raised tensions and already led to bloodshed. The Free Yezidi Foundation stands in solidarity with Yezidis in harm's way, including those who are fighting as part of the Armenian forces. We hope for a swift end to this conflict. Yezidis and Armenians have enjoyed close relations for centuries, and we wish our Yezidi and Armenian brothers and sisters safety during this difficult time.

USAID held a virtual Evidence Summit on Strategic Religious Engagement in early October. The Free Yezidi Foundation's Harikara model was selected by USAID and featured as a promising practice, as can be seen in the image below. The FYF Harikara constitute a group of Yezidi women who have formed a sort of community 'brigade' to provide basic care and psychological first aid to the Yezidi community in the aftermath of the religiously-motivated Yezidi Genocide in 2014. To find out more, click here. 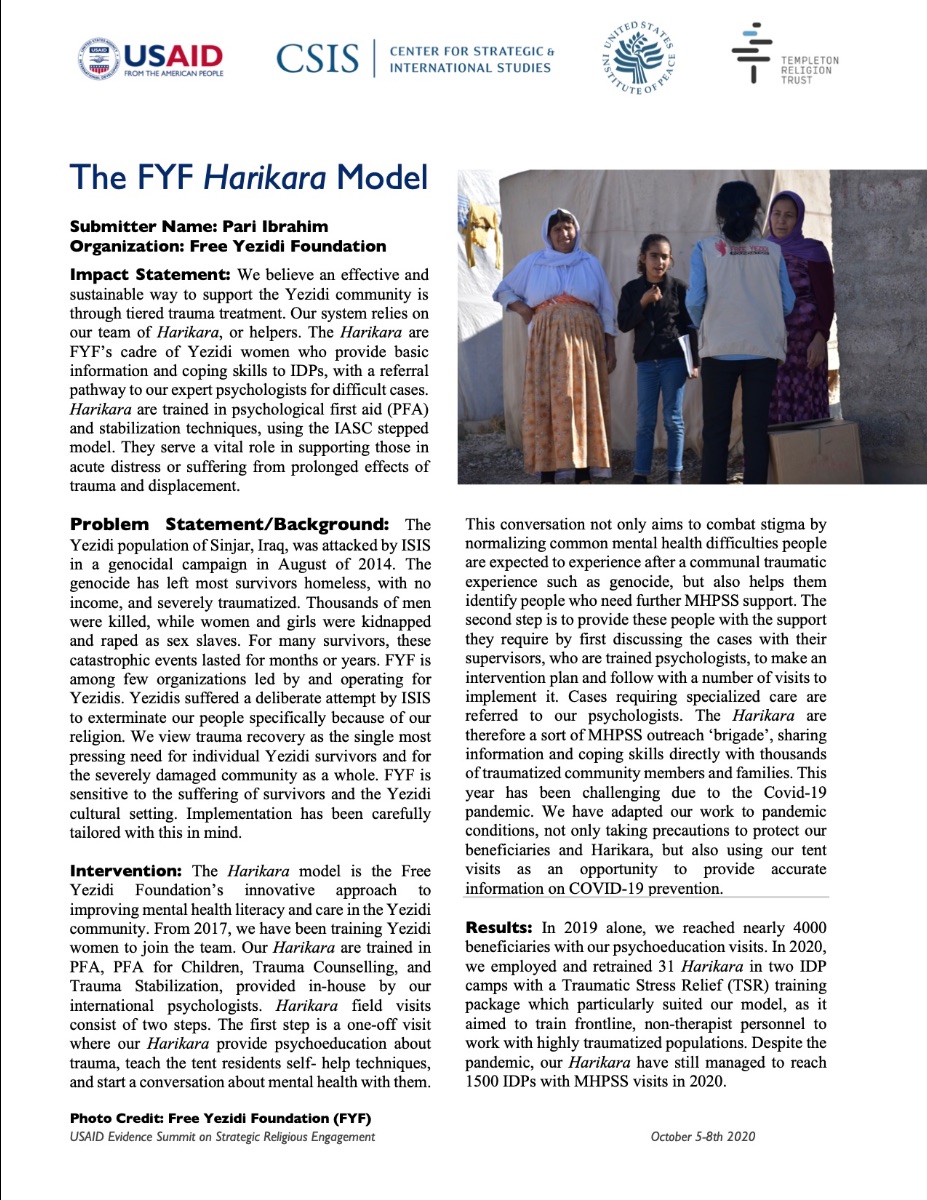 A mass grave in Solagh, Sinjar was exhumed and marked in the presence of Yezidi leaders and civil society this month. This grave contained mostly older Yezidi women, who were killed instead of taken as 'slaves' by ISIS. It is now referred to as the mass grave of mothers. The Free Yezidi Foundation and other organizations and social and religious leaders were present to mark the exhumation and to show solidarity with those we have lost and the families of those who were killed. It is important for families to be able to bury loved ones, and for the crimes committed against the innocent to be fully investigated and perpetrators brought to justice. 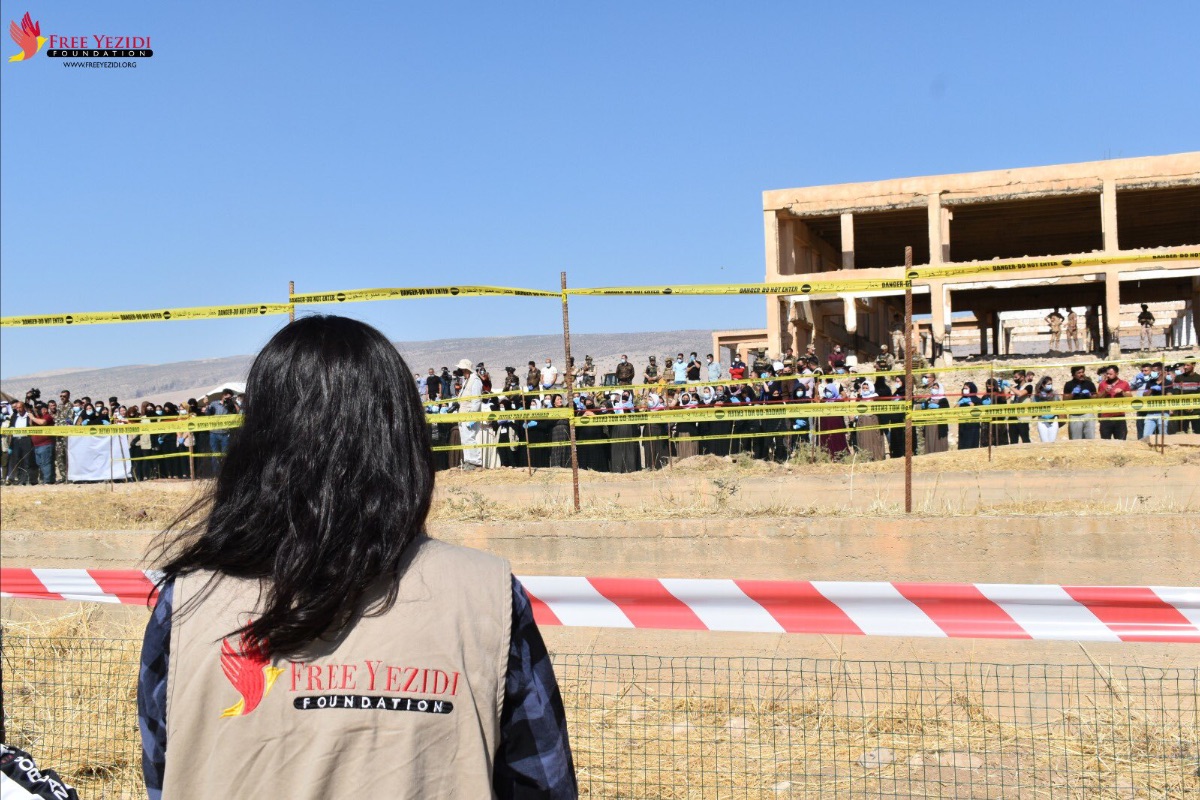 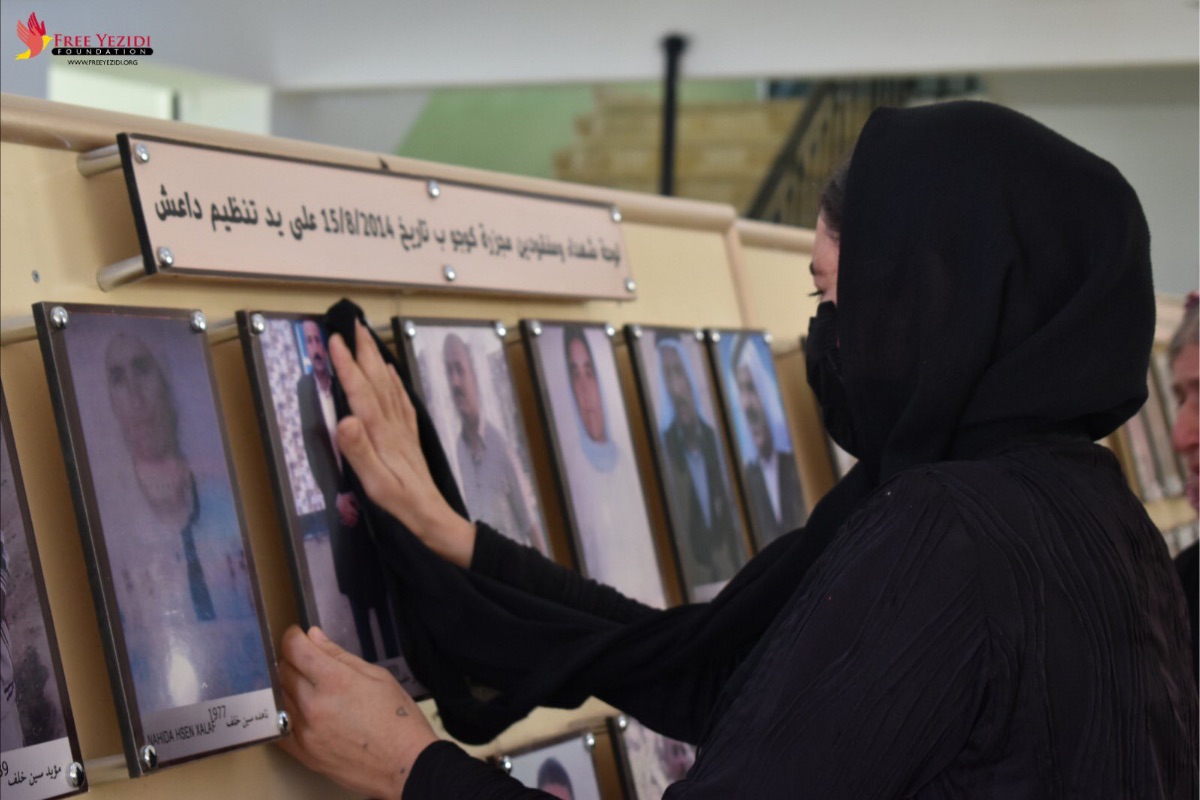 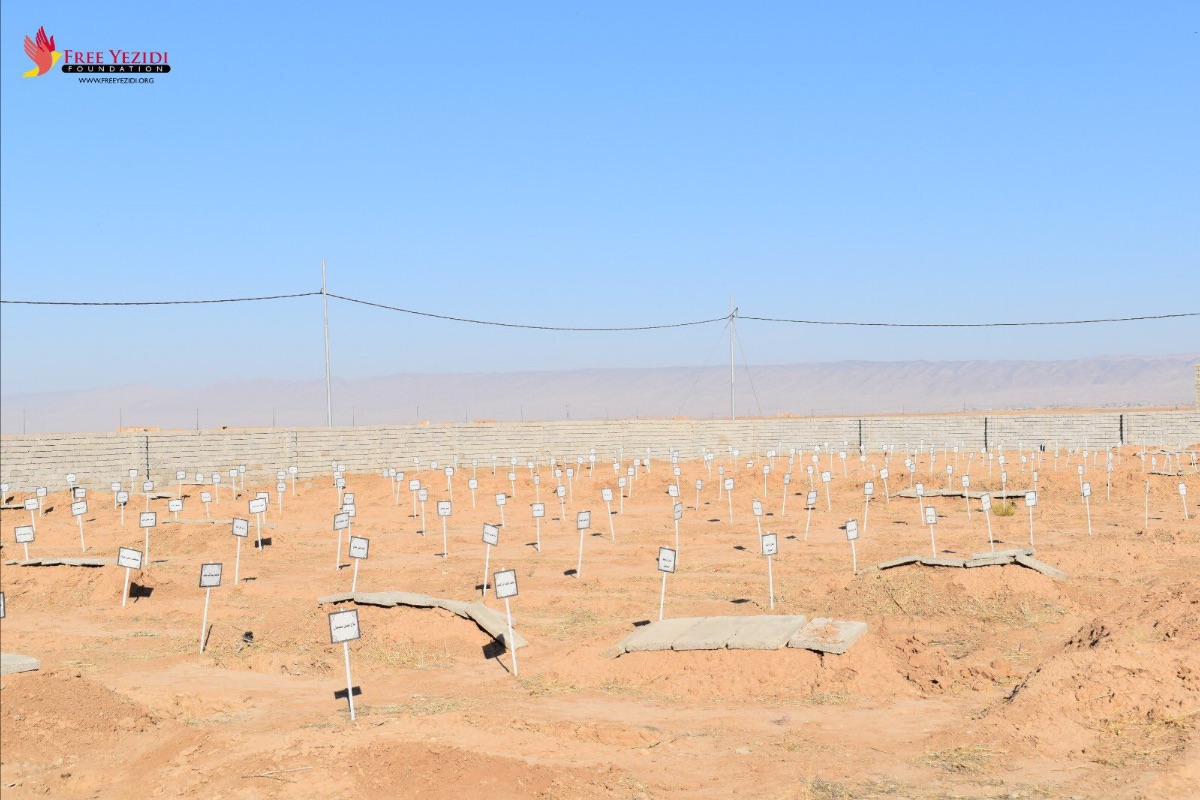 From the Field: Fatima and the Sewing/Knitting Course

"Attending the sewing and knitting classes helped me a lot. Before I had no knowledge about these subjects, but now I am able to sew and knit things for myself and my daughters, which makes me feel very good. Attending classes kept me busy and therefore helped me to not overthink. I consider them self-care because even mentally and physically I feel better now. That's why I want to attend another course at the Free Yezidi Foundation Women's Center. I cannot thank the staff enough! They are giving support to all people by giving them the opportunity to attend these wonderful courses with those very good teachers." Fatima, 51 years old, attended classes from June - August 2020.

Unfortunately, because of COVID, FYF has had to reduce the total number of beneficiaries attending the center at a time. Space is limited and there is a long wait list. FYF does its best to provide chances to a large pool of potential beneficiaries in and out of camp, and is seeking another facility to help us meet the demands. 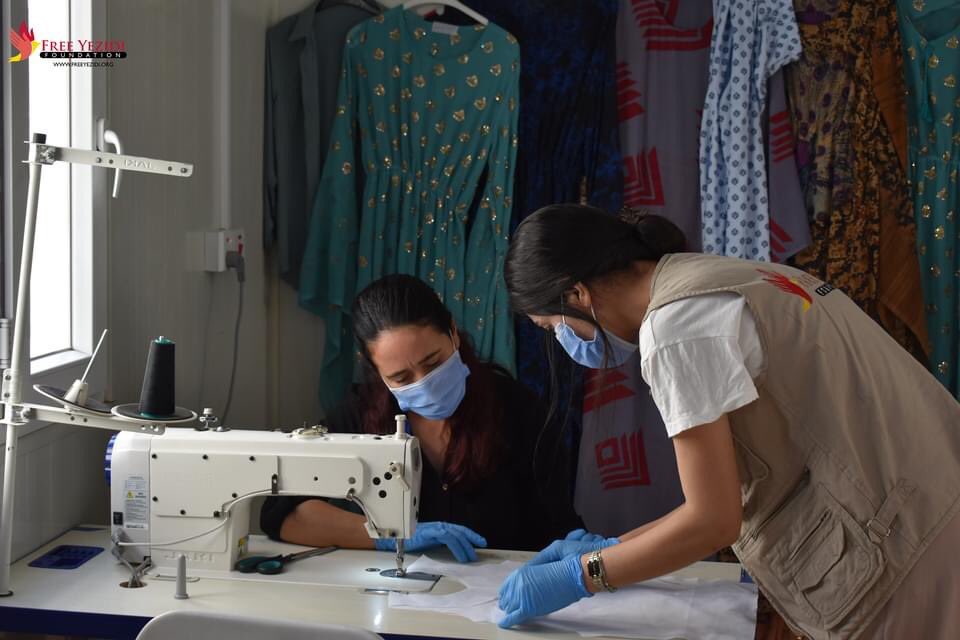 Ad.NL | IS-Slachtoffers Zijn Woedend Over Nederlands Toneelstuk Over Syriegangster Laura H | The article (in Dutch) highlights the FYF statement on the glorification and platform of convicted terror accomplice Laura H.

Rudaw | German Woman Sentenced to Prison for ISIS Membership, Enslavement of Yezidi Girl | The article includes a quote from earlier FYF reports on the culpability of female ISIS members

Kurdistan-24 | KRG and Baghdad Reach Administrative, Security Agreement on Sinjar | The article includes a quote from the Free Yezidi Foundation about the Shingal agreement

Rudaw | Erbil-Baghdad Deal on Shingal Will Recruit Locals into Security Forces: Spokesperson | The article includes a quote from the Free Yezidi Foundation about the Shingal agreement