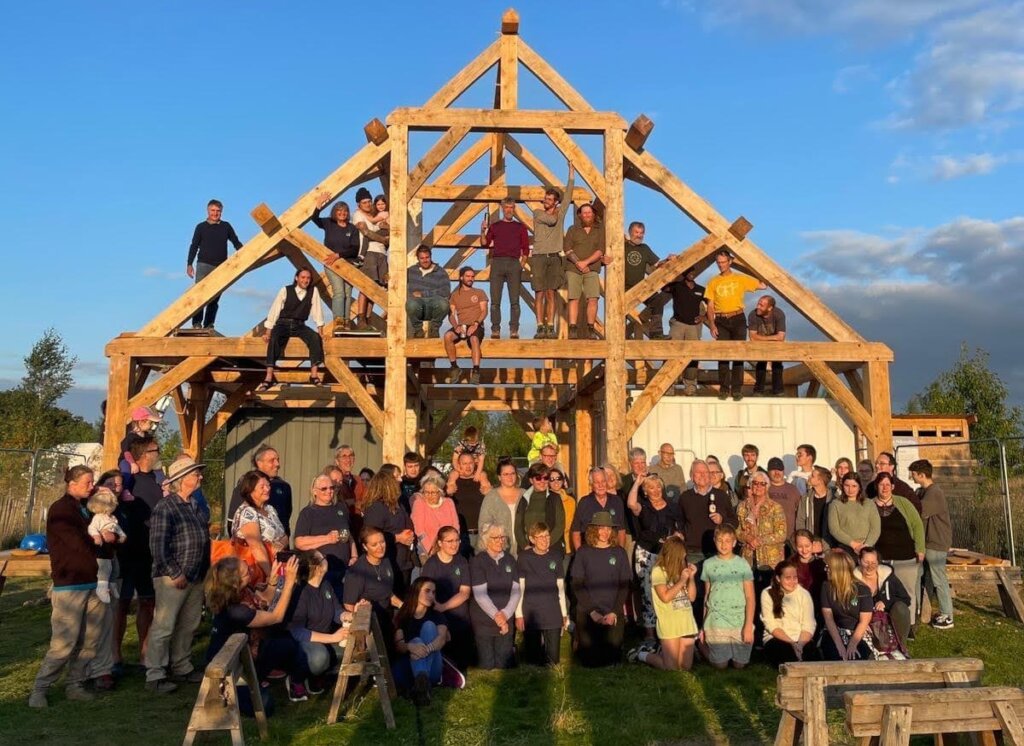 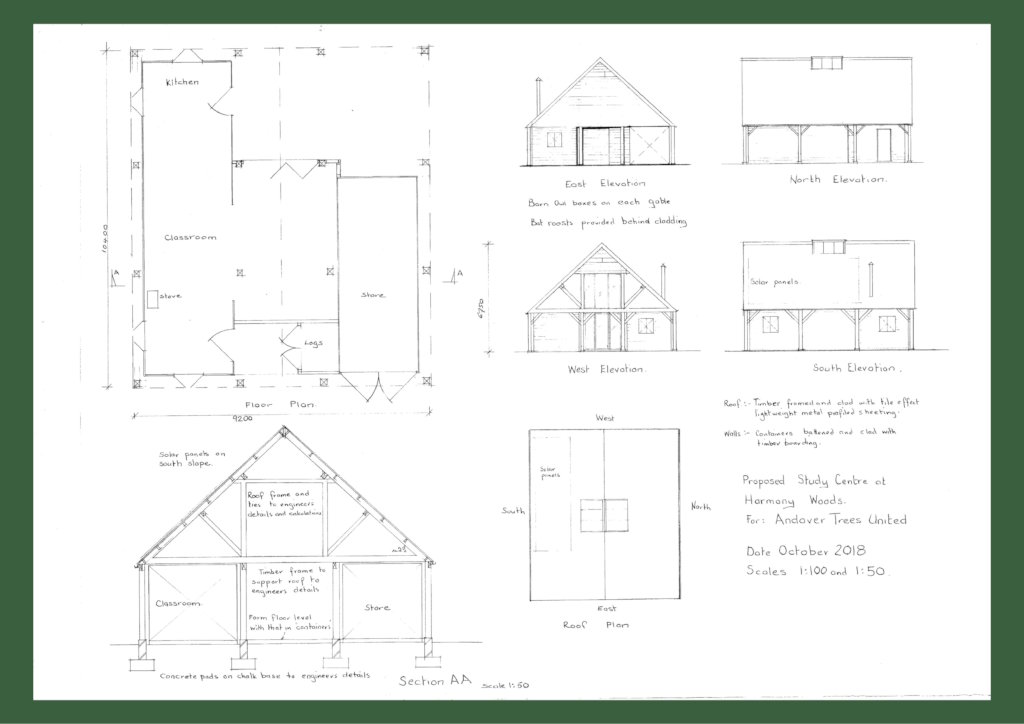 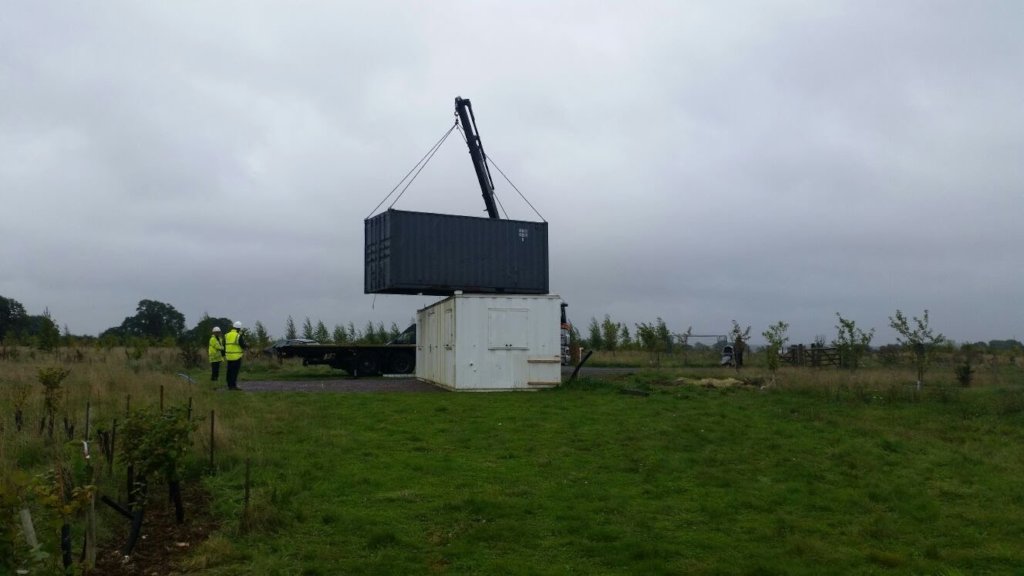 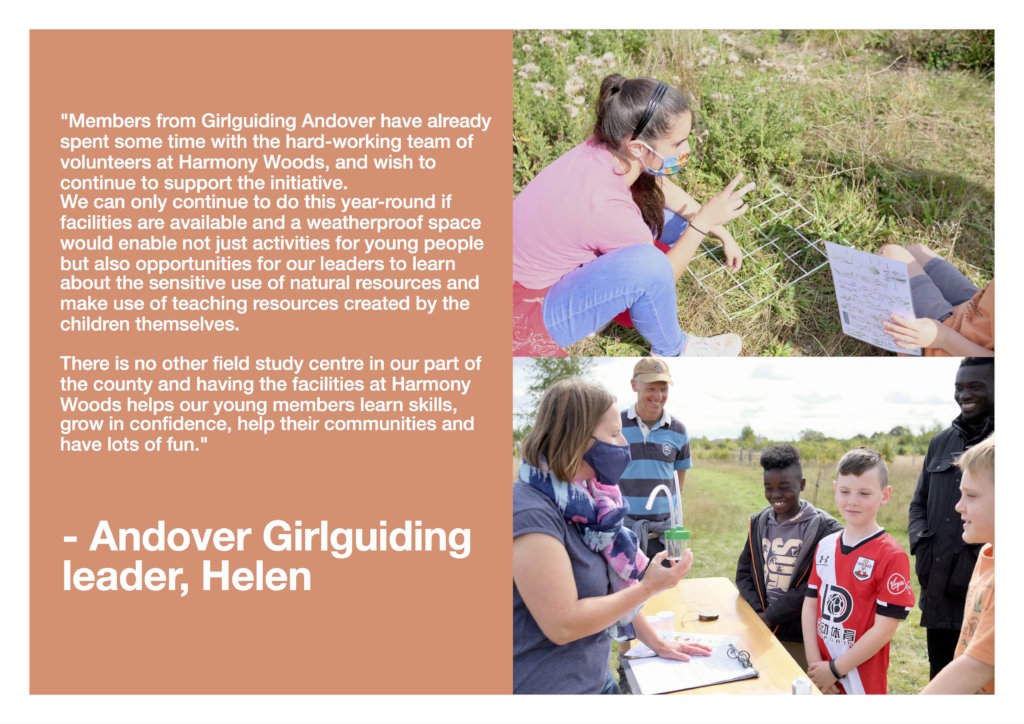 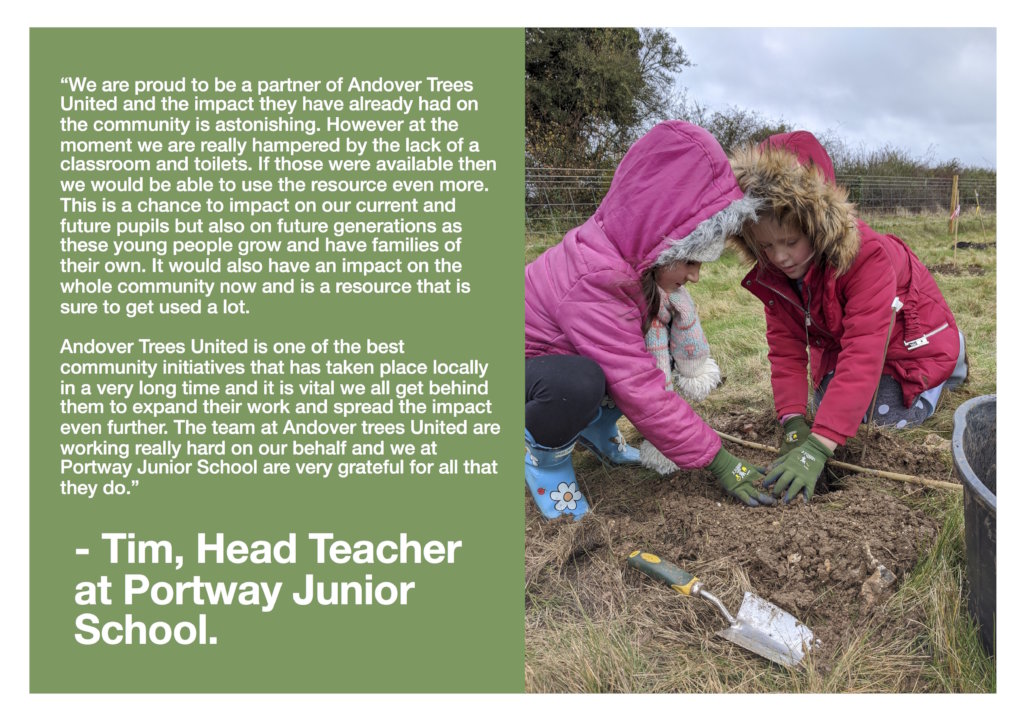 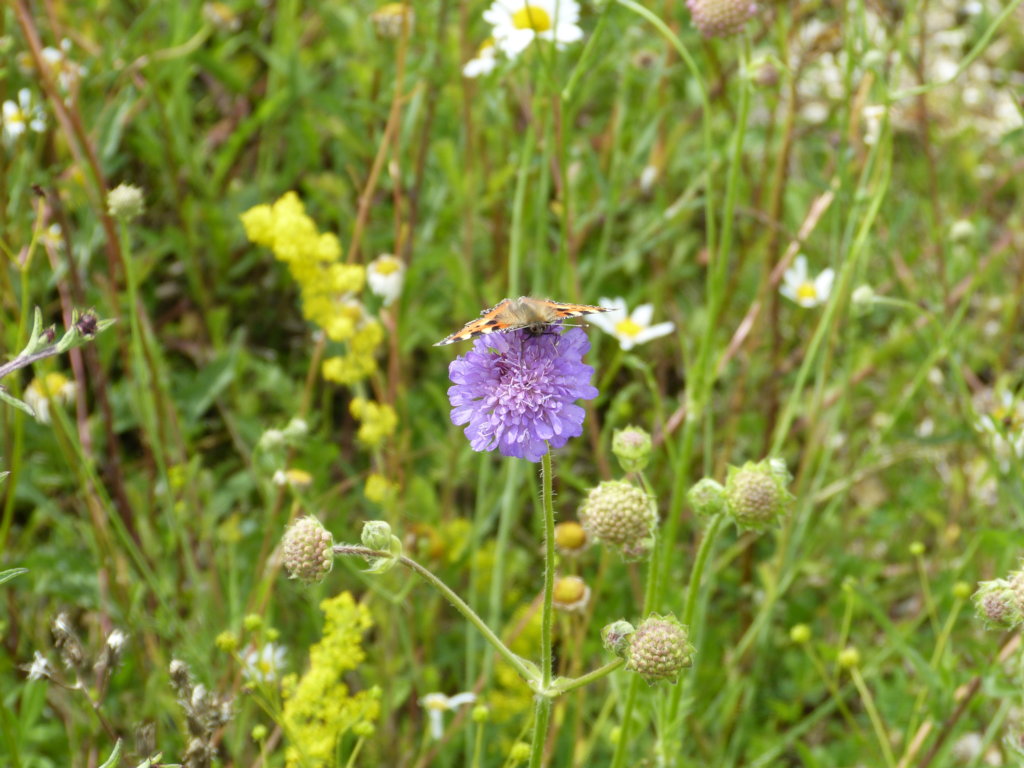 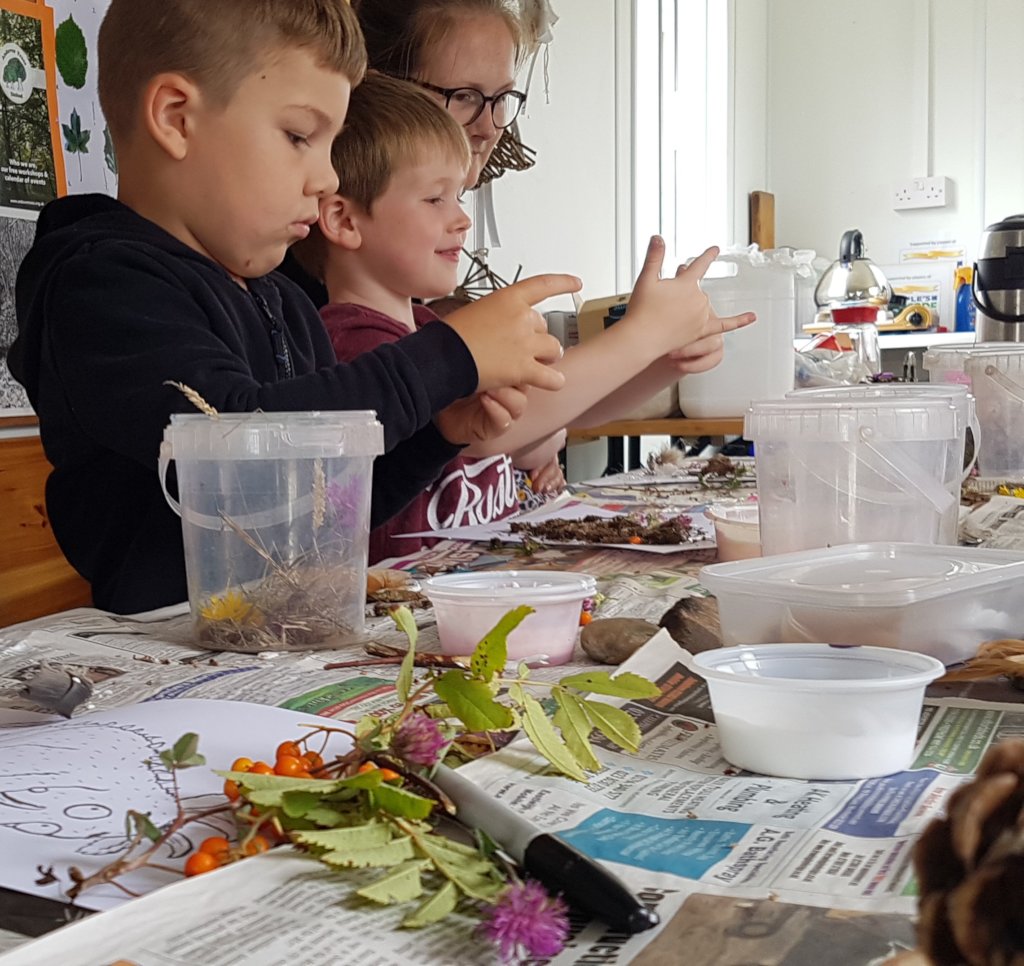 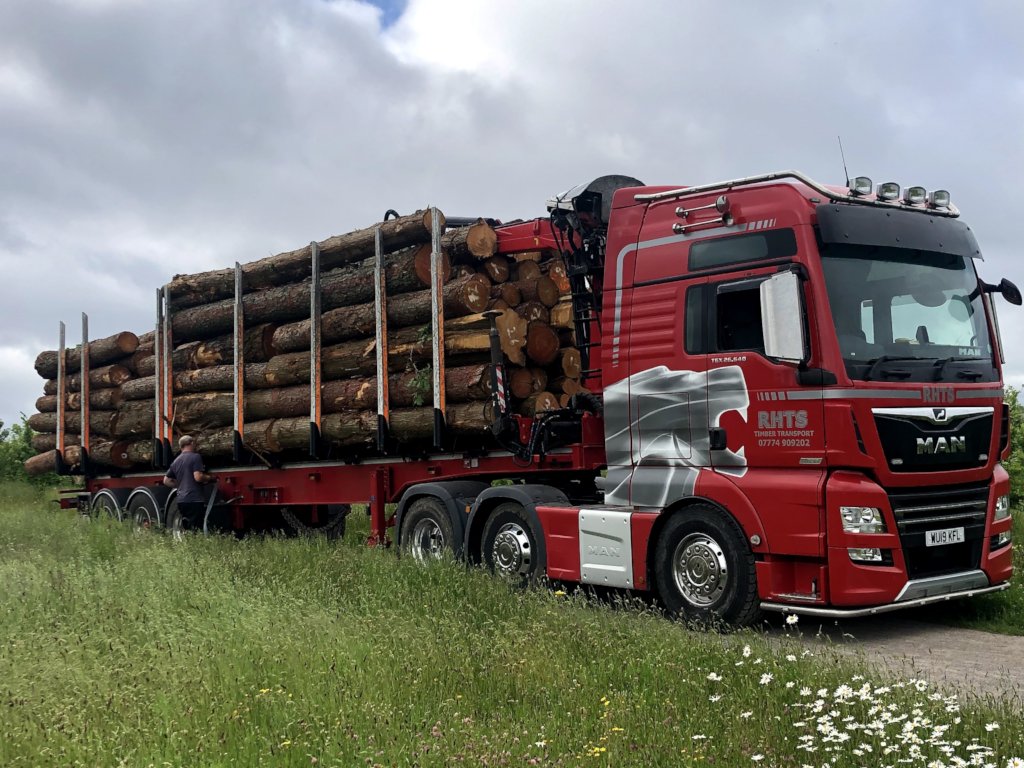 We are very excited to bring you an update on the Cabin build! Read on to find out about the axe hewing, the digging of the post holes, the mobile saw mill and start of the framing.

On the morning of Friday 11th June the timber arrived! We originally thought that the Larch and Western Red Cedar trees, which had been felled at nearby Harewood Forest, would need to be transported on several loads, now here they were on THE most enormous truck any of us had ever seen! So the next question was will it get through the gate?! Thanks to the phenomenal skill of the driver, the lorry passed through the main gate by the Anton Sports ground and along the gravel path before reversing through the Andover Trees United gate into Harmony Woods. A crane was then used to lift the logs - measuring 41 cubic metres, 28.7 metric tons - into the dedicated hewing area.

On Thursday 17th June, the first of the members of the Carpenters Fellowship arrived and they immediately set to work building a fully-functioning shower which was plumbed into our mains supply and had its own generator to heat the water!

Over the course of Thursday, everyone helped to set-up camp and, the following day, the hewing commenced! By mid-morning on the 18th, all 20 carpenters (from across England) had arrived on site and were busy chipping away. Unfortunately, the torrential rain arrived too but this did not stop the carpenters or our amazing support team - it was a remarkable effort!

A total of 10 ATU volunteers worked alongside the carpenters to experience the axe hewing and there was a real mix of people from 20-70 year olds, men and women - it was a truly inclusive group.

On Saturday 19th June, the BBC were on site to cover the project and this footage went out on BBC South Today on Sunday evening.

The carpenters enjoyed meeting Archeologist, Chris Elmer from Southampton University, who gave a talk on the archaeological significance of Harmony Woods as a Bronze Age burial site. Project founder, Wendy Davis, also gave a talk on Andover Trees United and the last 10 years and just how important the cabin and the efforts of the carpenters and volunteers are to the overall vision of the project.

Some of the carpenters left on Saturday evening to get home for Fathers’ Day on Sunday, others on Sunday and a few on Monday when we were down to 10 carpenters to finish the last of the hewing. Some will return for Phase 2: framing & jointing (7th July - 8th August) and, those that can, will return for the raising of the frames (Phase 3) at the end of August (26th-28th).

As the (very tired) carpenters said their “goodbyes” they commented on how happy they were to be involved with such an important project and how thankful they were to all the support team; because without that support the carpenters’ work could not have been achieved.

A special thanks must go to the 40 people who answered the call for volunteers for phase 1 of the project - they set up-tents, were up early to cook breakfast, back again with lunch and dinner (cooked at home and onsite), baked delicious cakes, shopped, kept the site looking ship-shape, refreshed the carpenters and anything that was needed they were there even through torrential rain. Amazing!

By midday on Monday, there were 8, beautifully hewn, 6m posts which will create the inner posts for the cabin frame.

On Tuesday 22nd June a team of half a dozen volunteers, including corporate volunteers from the Co-op, were on-site to clear-up the wood waste, which will be used for habitat piles, mulching young trees, lining paths and firewood (once dried).

Children from Appleshaw Primary School were also on site as part of a Jane Goodall Roots & Shoots activity to discover what is living in the woods. The children had taken part in a dress down day back in March to raise money for the cabin project so it was great to show the 20 children the hewed logs and talk about all the action which had taken place over the previous week.

The campsite remains in place with all the facilities still functioning and our volunteer team continues to watch over the site day and night. If you live locally and would like to get involved in the camping please get in touch. Waking to the Skylarks is truly a magical experience!

Over the weekend of 26th-27th June we had a team of 8 people digging the holes for the concrete pads that will support the main posts. Steve, Callum, Graham, Carl, helped by daughter Olivia, David, Harvey, Harvey’s dad and Michael dug out all 16 holes - each one 70-150cm deep and all 90cm square! They had to dig through 10-12 cms of scalpings, into the clay and then into the chalk. They worked so hard, in hot weather, their effort was incredible!

The buildings inspector has now visited the site to approve the holes. Once a positive report has been received, the concrete will be poured into the holes, levelled and the steel feet, which hold the main posts, will be bolted to the concrete.

On Monday 28th, a huge mobile saw mill arrived on site and work began to cut the braces, rafters and beams from the remaining 70 logs. A week later, the timbers were all milled ready for the carpenters who arrived back on site on the 7th July to begin Phase 2.

This week saw the 1st of five weeks of framing, where the timbers will be shaped and jointed to form the sections of the frame that will be raised in late August. A team of 4-5 carpenters, including volunteers who will learn alongside the expert framers, will carry out the work, taking us another step closer to achieving our goal.

If you are reading this, it is your generous donations that have helped to make this possible and, on behalf of the Andover Trees United team and wider community, we would again like to say how grateful we are for your support. 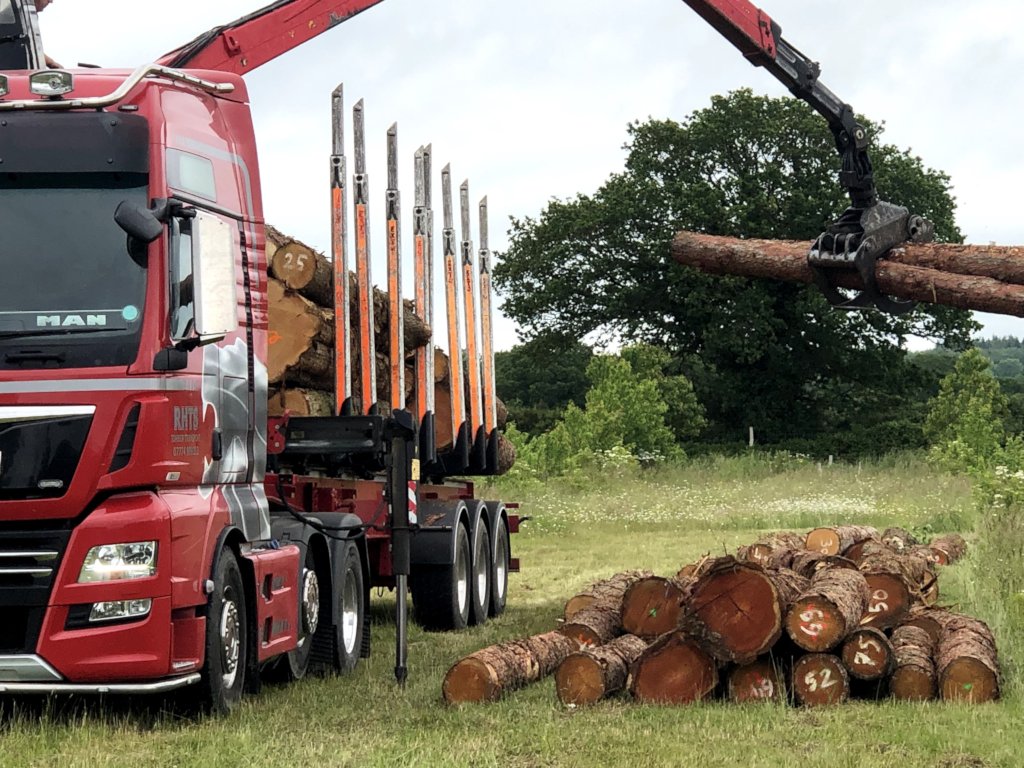 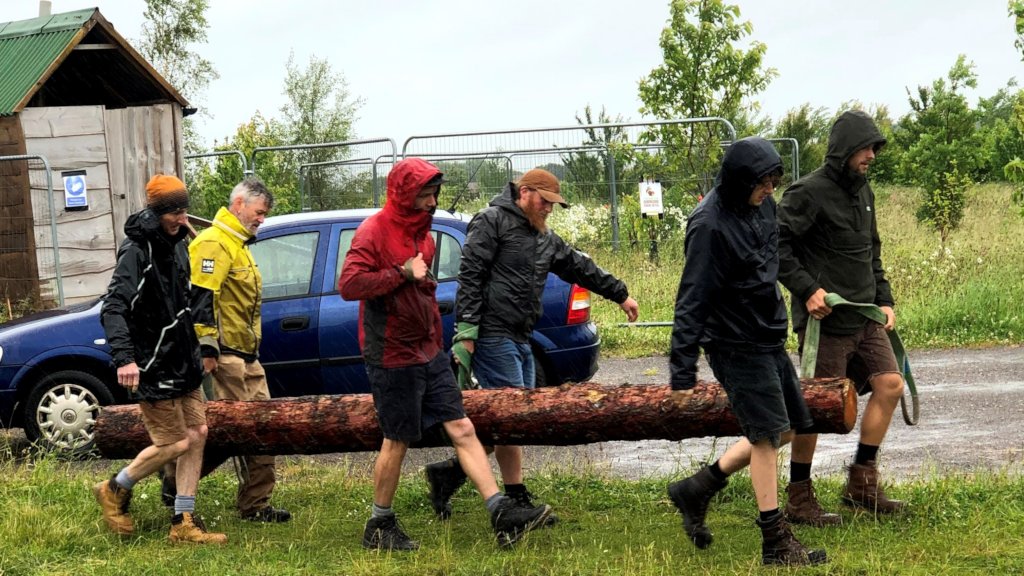 Moving the logs to the hewing site 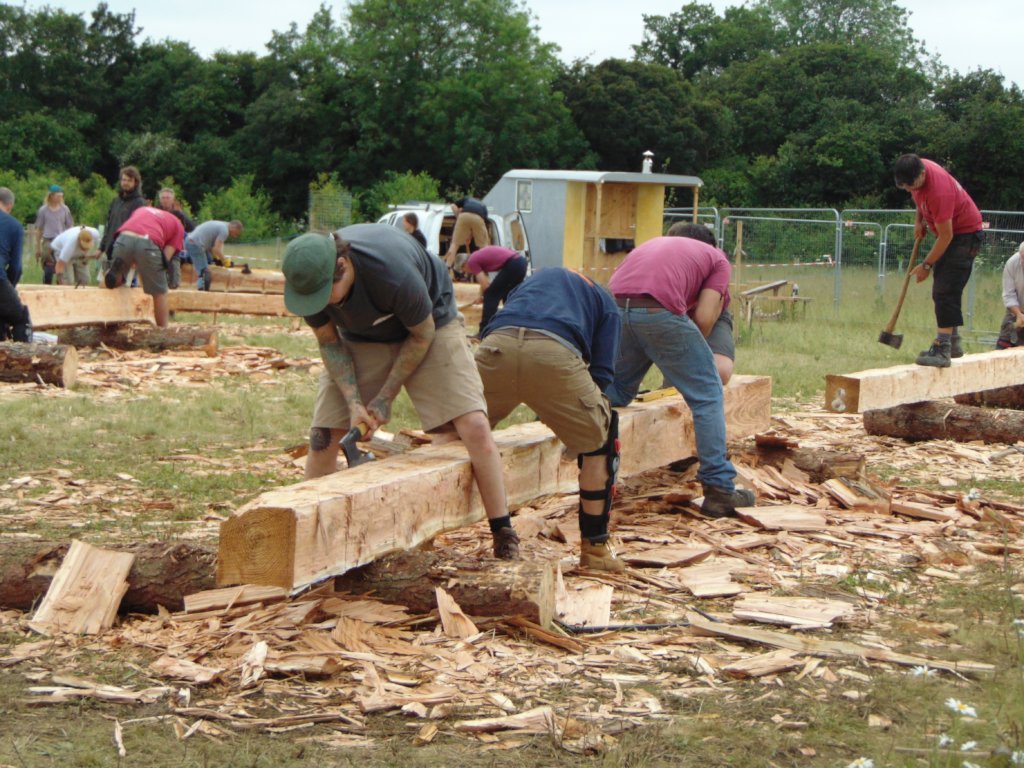 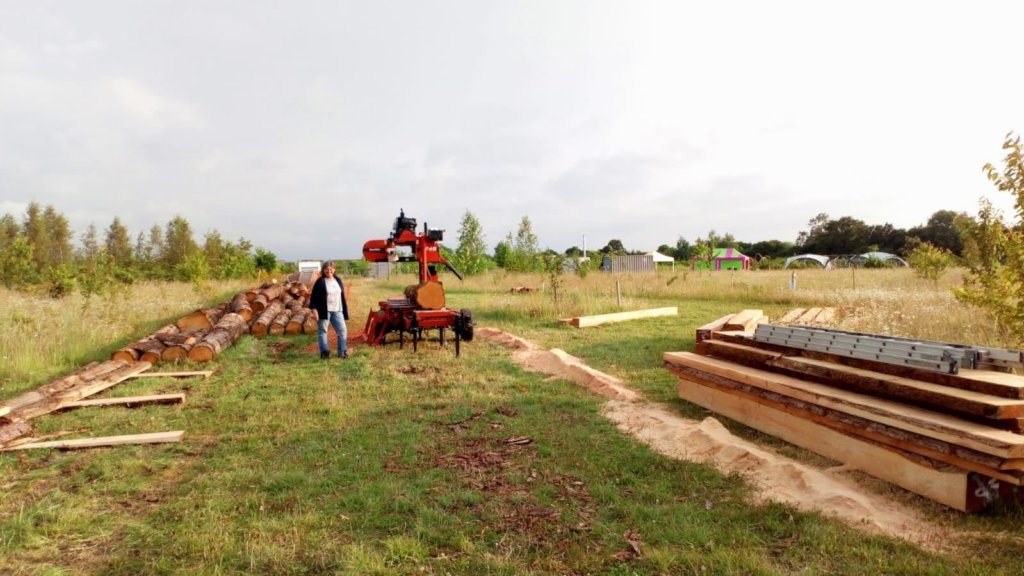 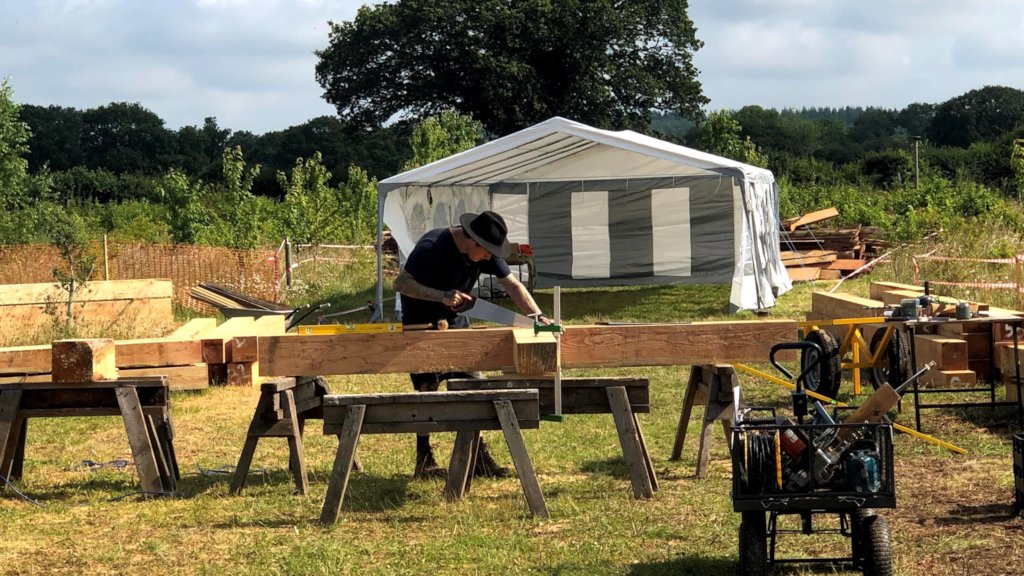 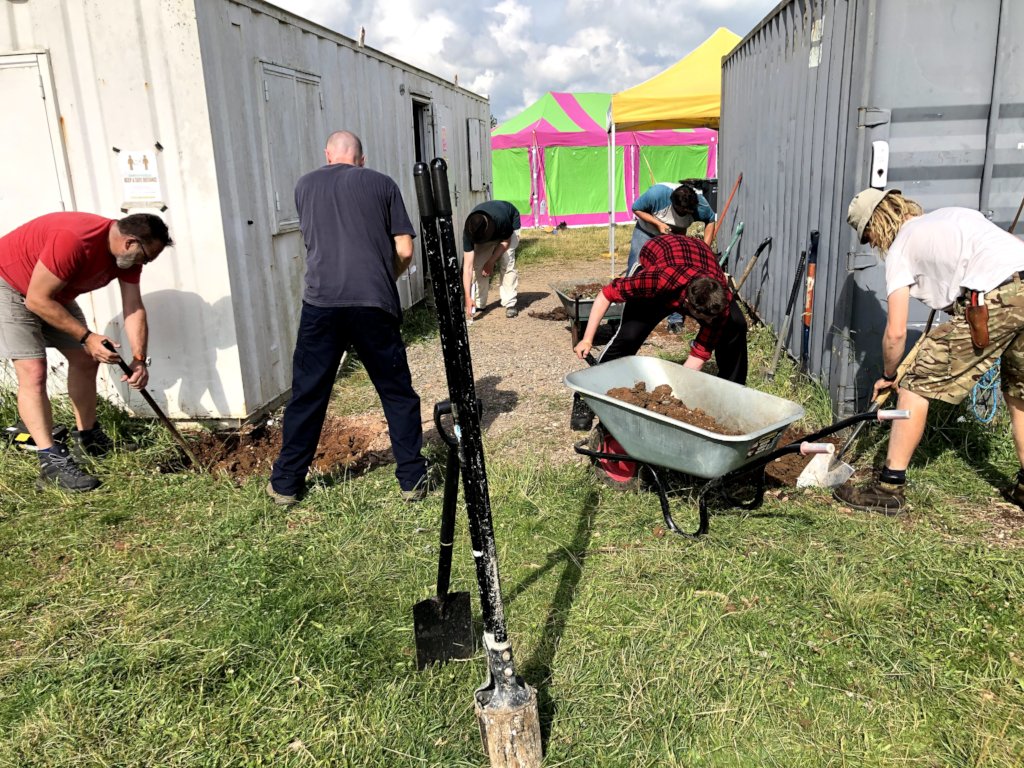 Digging out holes for the concrete pads 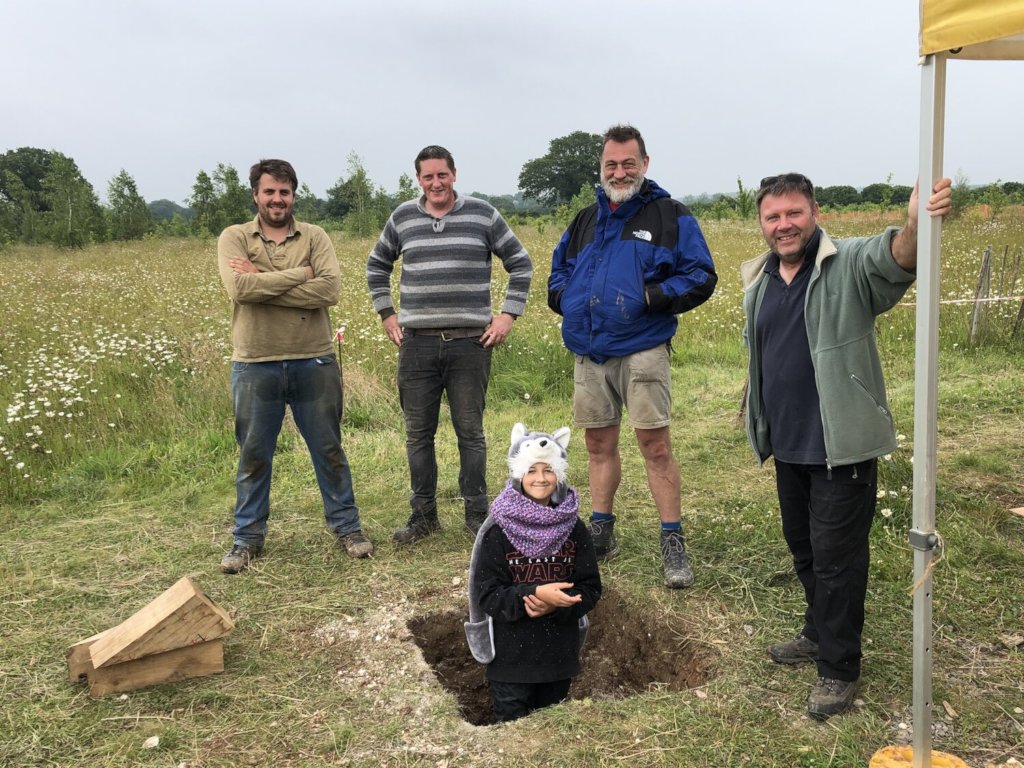 Help was given by volunteers of all ages

Project Leader:
Wendy Davis
Abbotts Ann, Hants United Kingdom
$10,145 raised of $13,186 goal
You last donated to this project on
240 donations
$3,041 to go
* Amounts in US Dollars
Donate Now
Donate once
Donate monthly
$10
USD
buys a box of wood screws
›
$13
USD
will pay for 10 of 1000 handmade wooden pegs needed to join the timber frame sections
›
$33
USD
buys 1 roll of wall insulation
›
$66
USD
will provide a square metre of all-weather timber flooring for 2 class-sized areas: 1 inside, 1 outside (30 square metres needed in total)
›
$132
USD
will buy electrical cabling and fittings
›
$329
USD
will pay for 1 of the 16 concrete pads on which will sit the timber roof supports
›
$659
USD
will buy 1 solar panel and help to provide much-needed electricity
›
$1,318
USD
buys 1 of the 12 Insulated roofing sheets needed to complete the build and provide shelter from the elements
›

Make a monthly donation & get matched today at 100% while funds remain. Terms and conditions apply.
Give the gift of stability in a time of instability. Set up an automatic, monthly gift now and get matched at 100%—because the COVID-19 pandemic has hurt us all, and it will take all of us to overcome it. Terms and conditions apply.
Monthly giving is as easy, safe, and as inexpensive as a Netflix subscription. Start a monthly donation to Andover Trees United today and get matched at 100%. Terms and conditions apply.
$10
USD
monthly
buys a box of wood screws
›
$13
USD
monthly
will pay for 10 of 1000 handmade wooden pegs needed to join the timber frame sections
›
$33
USD
monthly
buys 1 roll of wall insulation
›
$66
USD
monthly
will provide a square metre of all-weather timber flooring for 2 class-sized areas: 1 inside, 1 outside (30 square metres needed in total)
›
$329
USD
monthly
will pay for 1 of the 16 concrete pads on which will sit the timber roof supports
›

Donating through GlobalGiving is safe, secure, and easy with many payment options to choose from. View other ways to donate
Andover Trees United has earned this recognition on GlobalGiving:

GlobalGiving
Guarantee
Donate https://www.globalgiving.org/dy/cart/view/gg.html?cmd=addItem&projid=48531&rf=microdata&frequency=ONCE&amount=25
Please Note
WARNING: Javascript is currently disabled or is not available in your browser. GlobalGiving makes extensive use of Javascript and will not function properly with Javascript disabled. Please enable Javascript and refresh this page.