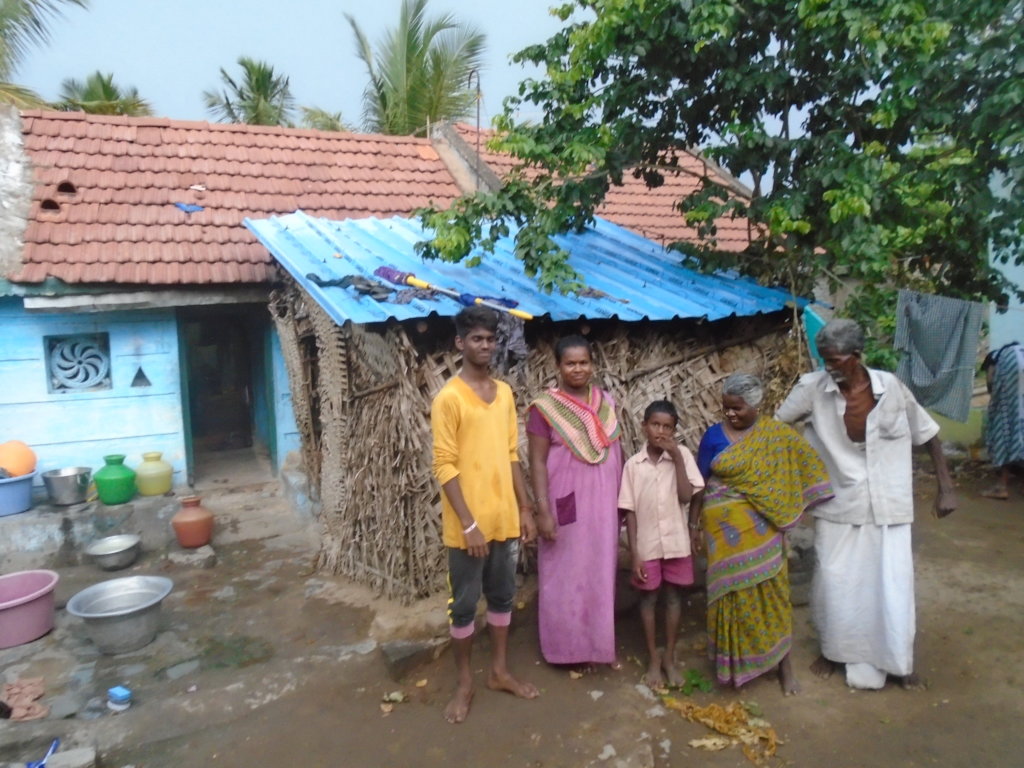 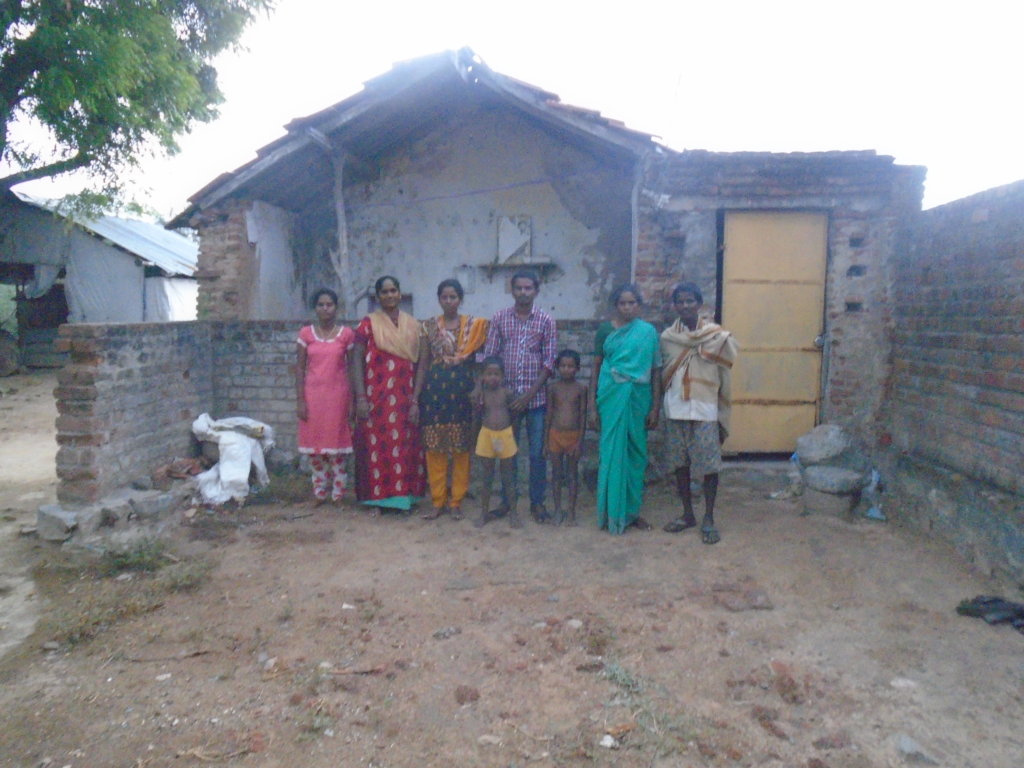 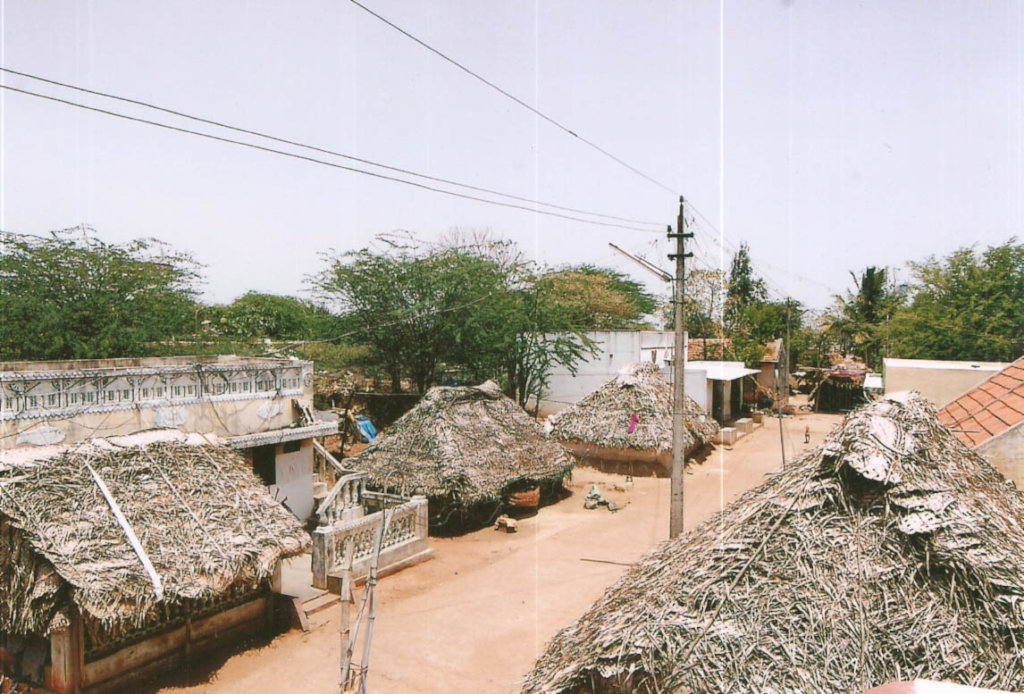 HELP RENOVATE 100 DAMAGED HOUSES. PROJECT REPORT ================================================ This project aim is is helping Help Renovate 100 Damaged Houses for 100 Tribal’s in India living in Tribal areas . The project area: Country: INDIA: State : Tamilnadu; District Tiruvannamalai; They have own registered land but no proper houses. Mostly living under difficult circumstances, at present their houses which are Hut or semi Roofs i.e. foundation and walls with bricks and cement and roof with coconut leaves. Because their building is totally collapsed, roof, flooring and walls were damaged. We would like to Alter this semi huts for their welfare. The entire project area is covered with hilly and tribal places. They doesn’t have any infrastructure or any equipments not evening owning any land and living in mud-huts. They belongs to (ethnic) scheduled castes/ tribes or Dalits or Harijans community and out caste in Hindu religion. They are all Indians. The project focus on both genders and to provide supports through women groups and youth groups. They are sexually weak and have no gender equality. The men are dominating women and women are compelled for dowry for getting marriage. The participants of the project are the women groups and youth groups in the age between 18 to 35 years. As they are all hard work labour their physical ability lacks behind because of non-availability of proper health and treatments. For every five people in this world, 1 is without a home. Housing changes everything for a family and children living in poverty. Inadequate Housing is one of the largest problems in the world today. It is pervasive and overwhelming. This approach to fighting poverty will have a direct effect on the efforts to reduce hunger, curb child marriage, empower women, reduce sickness, educate children and more. Community-led improvements in housing, housing infrastructure and the local environment can have significant benefits for children and young people living in poverty. Increased security, healthier living conditions and access to improved facilities lay the foundation for children to learn, develop and eventually contribute to community development efforts as well as generating income . The importance of the relationship between housing and poverty, and its Particular relevance to the situation of children, is not however always acknowledged in international development policy. Secure, good quality housing and its associated infrastructure (water, sanitation, drainage, electricity and waste disposal) is vital to people's wellbeing, but many poor people find that they do not have sufficient access to them. Similarly, relocation, forced eviction and the impact of natural disasters (all acute problems to poor families living in rudimentary facilities) particularly threaten children's welfare and Development. For example, poor quality, insecure housing imposes enormous health and safety costs on its inhabitants. Children's educational opportunities are also severely restricted by a family's need to concentrate time and money on maintaining shelter and related infrastructure, often requiring children to take on basic domestic responsibilities and / or income generating tasks from an early age. Addressing the housing and shelter needs that lie at the root of child poverty in rural areas is therefore vital to development. We must submit our profound thanks for GLOBAL GIVING support and your best cooperation.

Donating through GlobalGiving is safe, secure, and easy with many payment options to choose from. View other ways to donate
BUDDHA OUTCAST SOCIAL SOCIETY - BOSS has earned this recognition on GlobalGiving:

GlobalGiving
Guarantee
Donate https://www.globalgiving.org/dy/cart/view/gg.html?cmd=addItem&projid=31765&rf=microdata&frequency=ONCE&amount=25
Please Note
WARNING: Javascript is currently disabled or is not available in your browser. GlobalGiving makes extensive use of Javascript and will not function properly with Javascript disabled. Please enable Javascript and refresh this page.