Shoot to Score for 500 Children in Northern Kenya

When you can see the drought coming 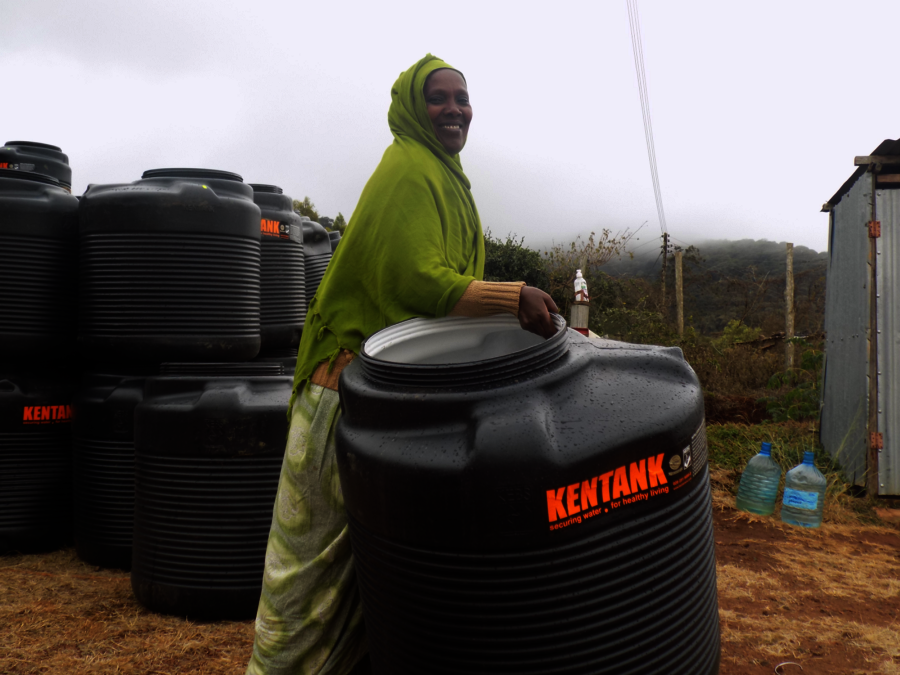 A mother with a water tank

As you celebrate thanksgiving this year we wanted to share why we are thankful both as HODI and the communities we work with in Marsabit. With all your support we have been very innovative in how we reached out to the communities to help build resilience! Today we are sharing with you the stories of 2 mothers whose children are not able to have a normal life because the mothers cannot provide even one meal a day. The next 120 days they do not have to worry where to get the food as it will be provided.

Despite the numerous challenges like drought, ongoing conflict, climate change, violent extremism & political instability! Northern Kenya region offers significant potential to address the issues affecting it and transform. Sharing with you a story of how small little steps can make a huge difference in building resilient communities! GlobalGiving was so impressed with HODI's work that they did an article about it! Take a moment to read, learn and share! Only together we can amplify our little voices! 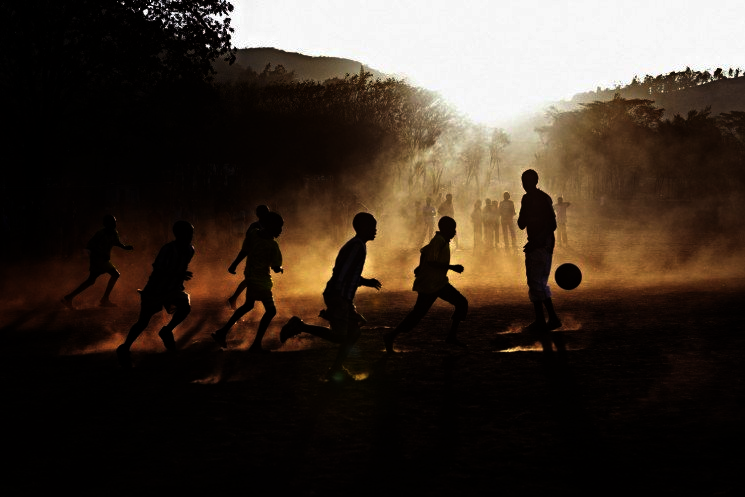 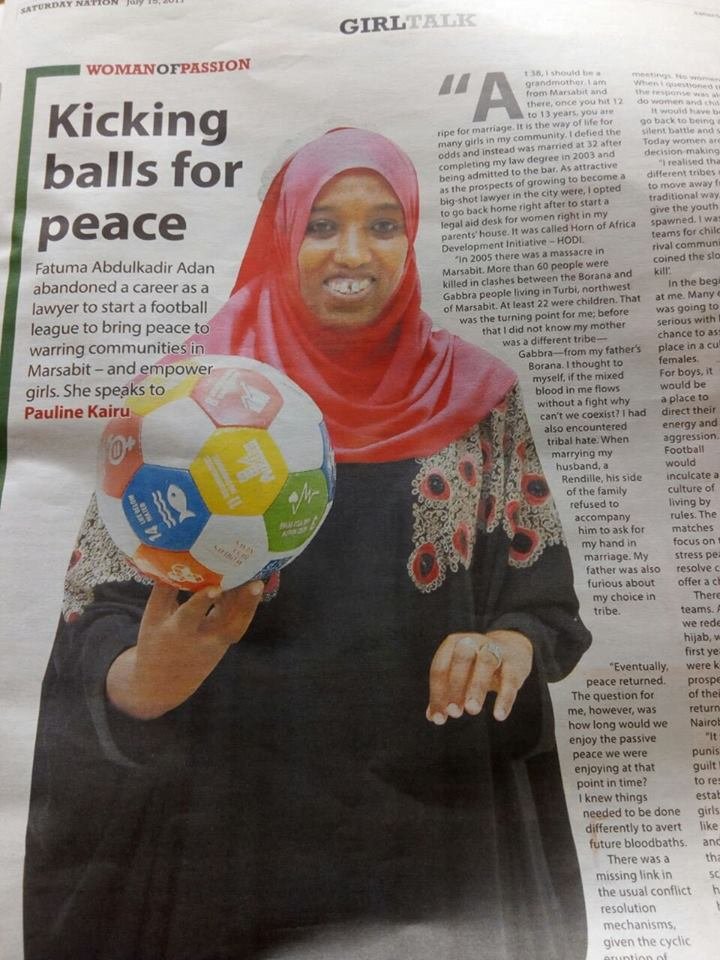 The end of June presented HODI with an invitation to Kazan Russia to make a presentation on the great work of using football for peace. We had a chance to showcase the great work of HODI and all that the support you have given has enabled us to accomplish.

Then came the suprise moment. Imagine walking up Saturday Morning and walkind down the road and everyone smiling at you and some waving the paper. This is what happened when our football program got a full page in the National Newspaper with a coverage of 1.7M readers. I want to take this opportunity to thank you for the great support and motivation over the years. We will be indebted forever as HODI and all the children who haev come through the program.

Before I sign off I would like to leave you with 3 pictures of the story! We would love to hear your feedback 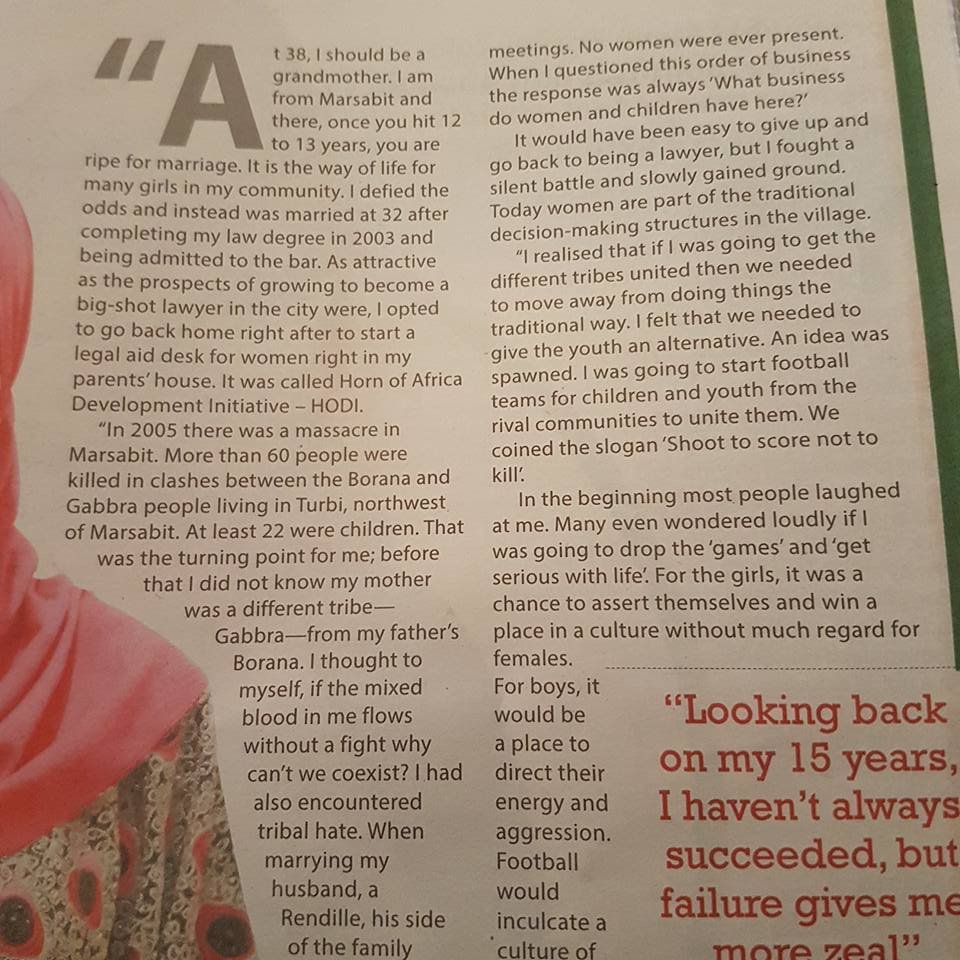 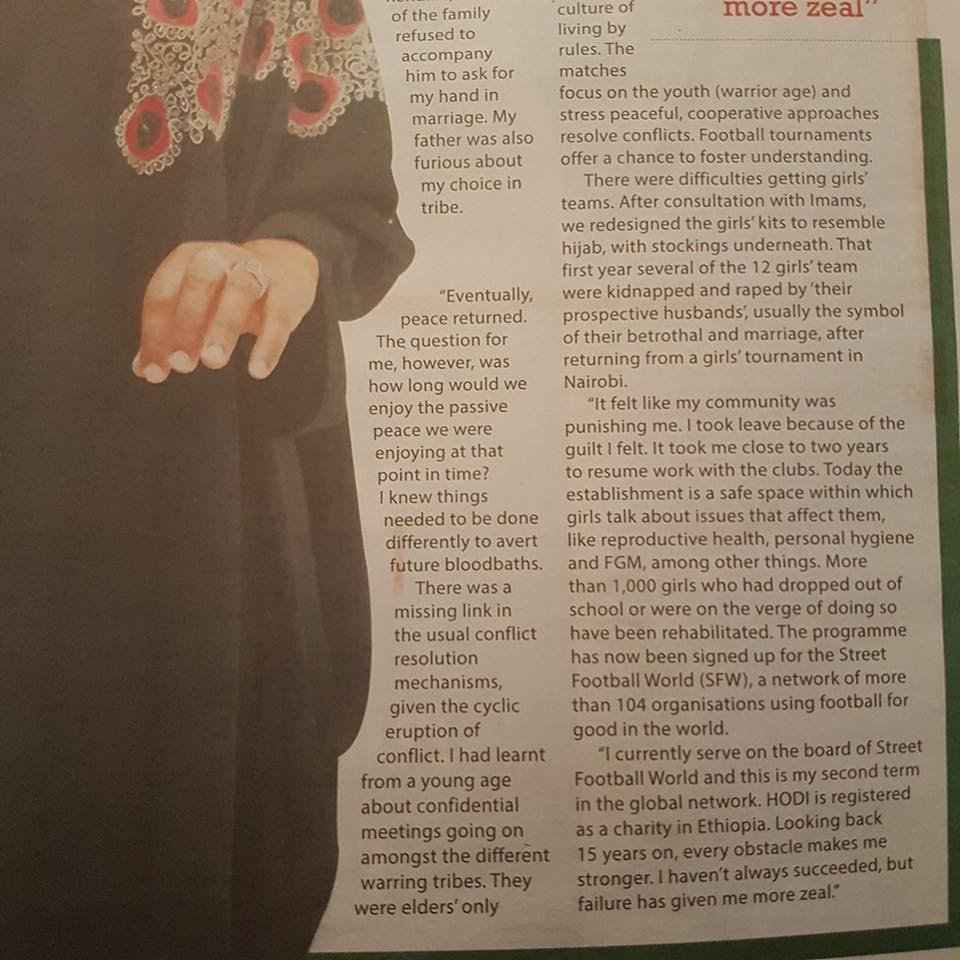 One small win led to a win at the global level 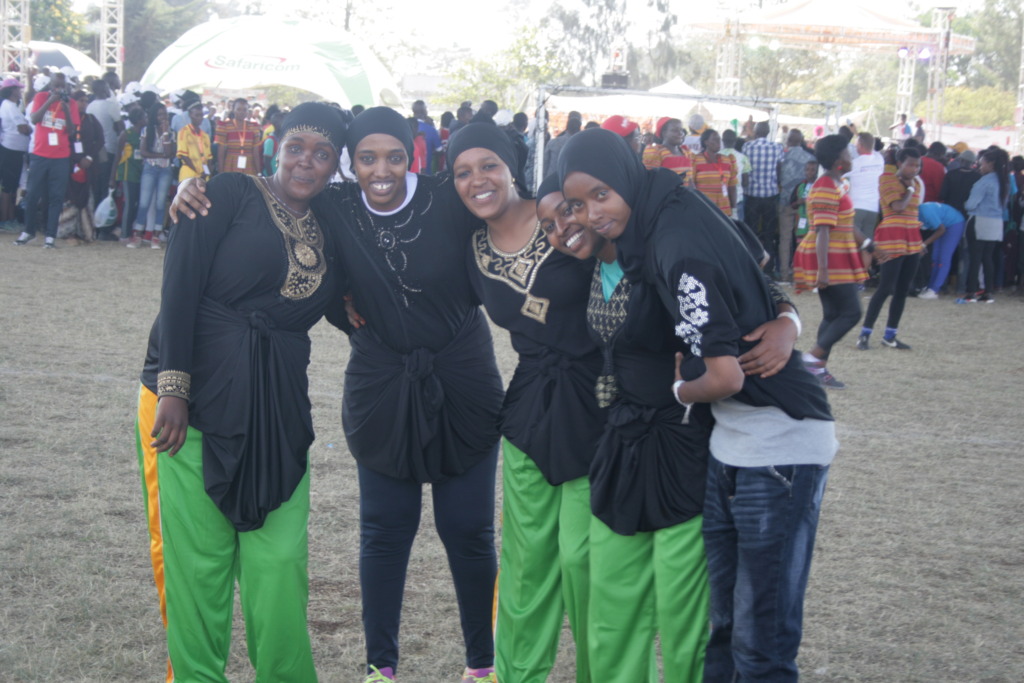 This month we celebrate the HODI women who have championed for the cause of girls and boys to have safe spaces to play and just be children. It takes lots of courage to bring along a group of armature women to play in an International tournament the level of Global Goals World Cup. Your support created these champions.

Each team had to choose a uniform and ours seemed the most difficult choice but it is the abaya we wear every other day! Most people looked at us and questioned how on earth can you play in this long rob? Long sleeved, flowing to the floor and with a scarf on the head, this is the beauty of just being yourself. We felt comfortable but our comfort made most Kenyans worry and tag us the team from Somalia.

We had most fun at the Global Goals World and we played 3 games with every player from HODI getting a chance to get on the field and score for Gender Equality. We had a song which we celebrated with our fans and all those who came to cheer team HODI. In the end being recognised as the team that has achieved in GOAL 5 for Gender Equality and overall in the SDGs was a huge honour.

This was just the beginning of a long journey we had started together and if you had not supported HODI then we will not have made it to the Global Goals World Cup. I had a chance to travel to New York and was nominated at the UN to champion Goal Number 5 on Gender Equality not just in Marsabit but in Kenya. The small steps we have taken together to build a peace field and break the silence for the girls and women is being recognised. It is a huge honour and again all this would not have been possible were it not for your support. Personally, I am excited and looking forward to share more on the new role for me and for HODI as an organisation.  Below is the link https://twitter.com/UNDP/status/841748366119849986 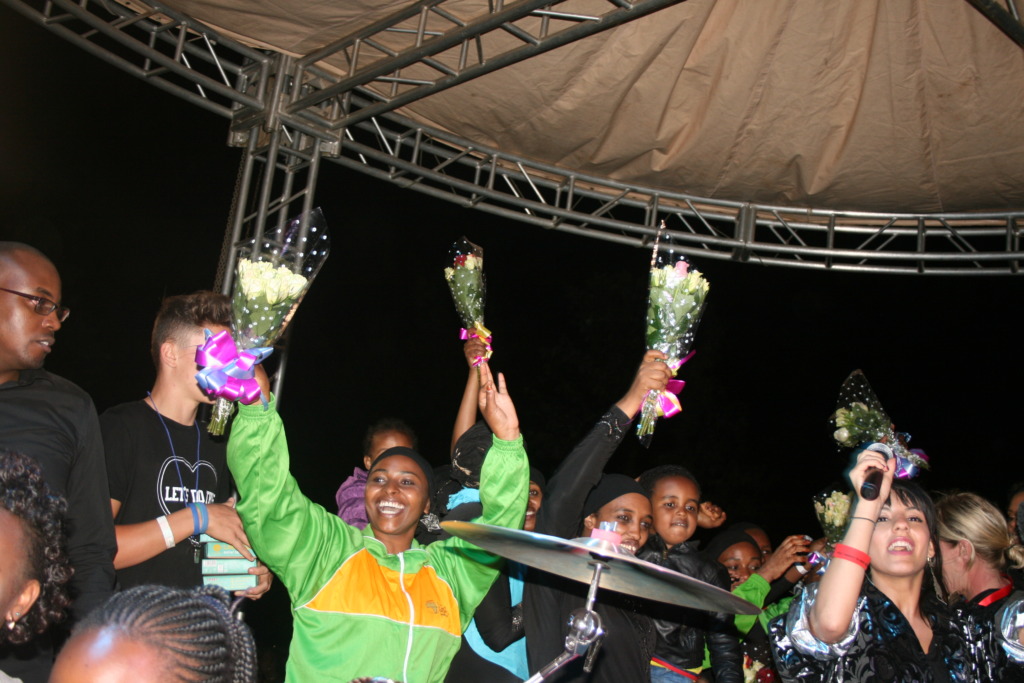 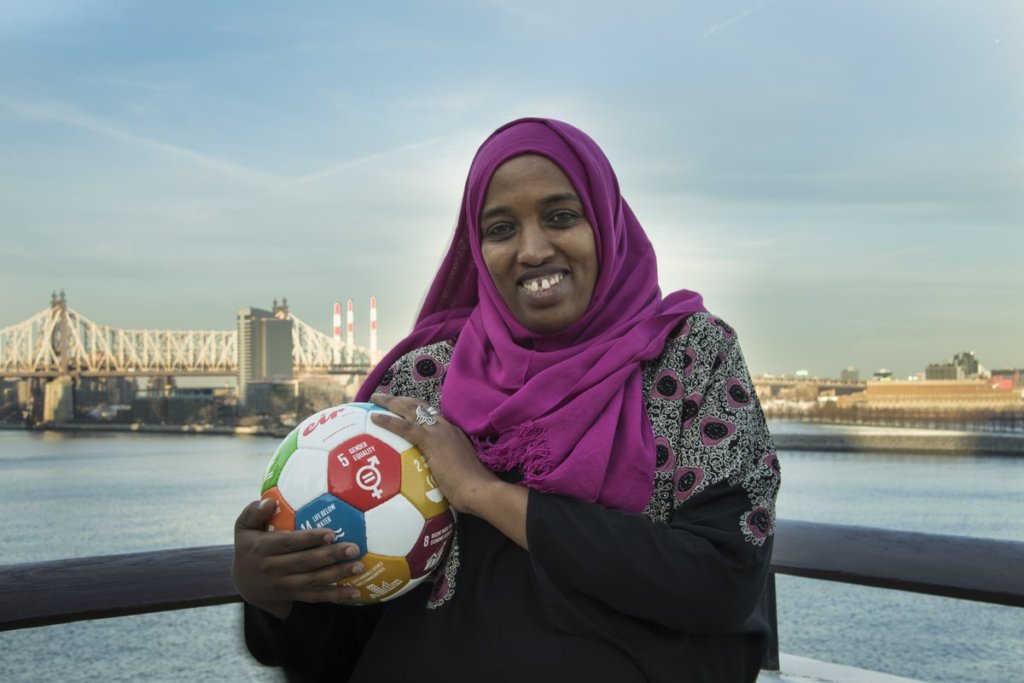 A champion for Gender Equality

In 2016, tribal wars broke up again in Marsabit and in most parts of Northern Kenya. As I make this note some camel had been stolen, 3 people killed and plans to recover the same is underway. In 2016, some great things happen; HODI expanded its programs from Marsabit Central to Laisamis, Chalbi and Moyale. Building Resilient Communities in 150 villages and expanding our football program to 10 Fields reaching 3,000 children through shoot to score not to kill.

Tomorrow, December 31st, is the last day to make a charitable donation for the 2016 tax year. It's also your last chance to get your new monthly donation 200% matched by Global Giving! In 2017, we plan to launch our strategy and reach 250 villages and Build a Peace Village.

We count on your support to make it possible! 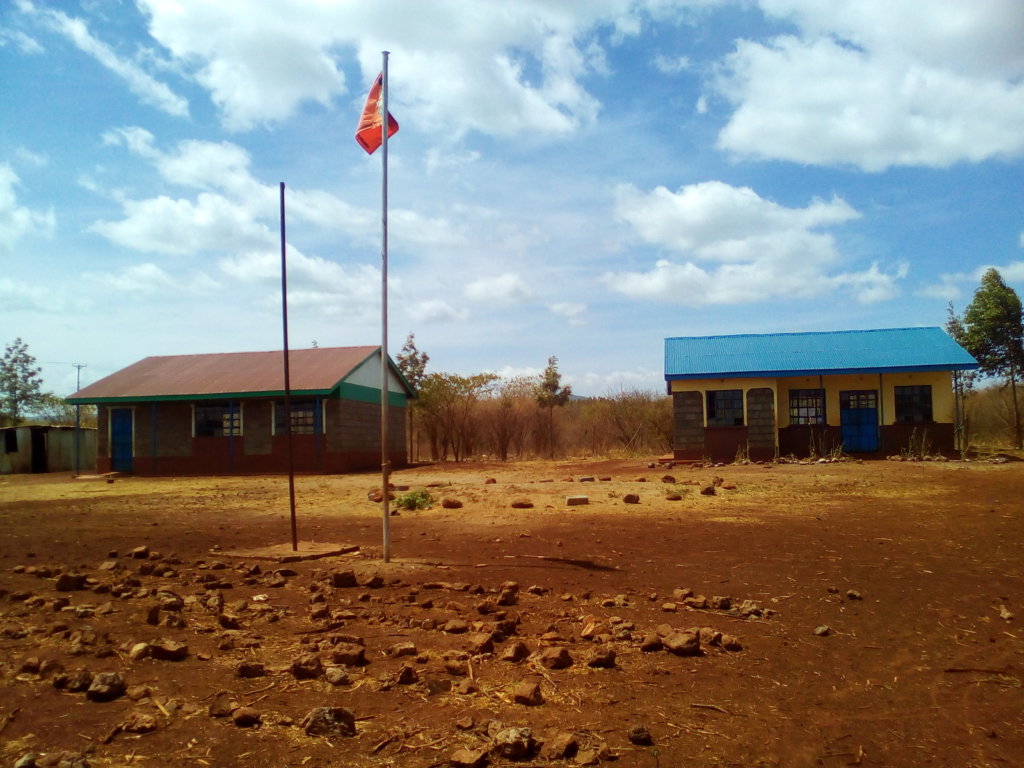 According to a new report by the Kenya National Bureau of Statistics (KNBS) and Society for International Development, illiteracy levels are high in northern Counties. Marsabit has a high level of 76%. In 2013 when HODI started working in Balozi, most vulnrable children had limited access to free primary education due to poor management of the schools, communities did not place high value in the education of their children and there was a poor learning environment.

It was not enough to just identify the issue but engaging the community through Mala Mari (community conversations) to deal with the underlying causes laid a foundation for success. The school was cut from most engagement due to its being 17km away from the town. A majority of the community were livestock hearders and had no time to discuss the education of their children. To many, just sending them to school was enough, the rest being the teachers’ responsibility. The task has been tough for the past three years, but getting together to dialogue through Mala Mari was just the beginning.

Mala Mari is well structured and involves working with community facilitators to help engage the community and each step of the way, community ownership of the process is crucial. HODI initiated the process and it was taken over by the facilitators and our role was that of backstopping, reflecting, learning and acting on the gaps that existed. Parents were engaged separately through Mala Mari and the children who were the main beneficieries were engaged in the school. Teachers were engaged through subject circles and shared their challenges and how to overcome them.

There are significant visible changes in the community in three years: reduced number of drop outs from the school; a high number of parents actively involved in the education of their children and improvement in school governance. As they exchanged with other communities and villages, they learnt one good practice of contributing to a kitty to undertake some of the development plans they had for the school.

“I am happy that parents are actively participating in school management after HODI’s intervention through community conversations. As a school, we are getting a lot of support from parents and this has produced more recent successful fundraising efforts.” Kano Dida, headteacher at Jaldesa Primary School, explains.

We are dedicating the Month of December to share our stories of change and we want take this chance to say thank you for your support in making this change possible. Time to go off now as we prepare our next story of change, looking forward to share that too.. https://hodiafrica.org/category/stories-of-change/ 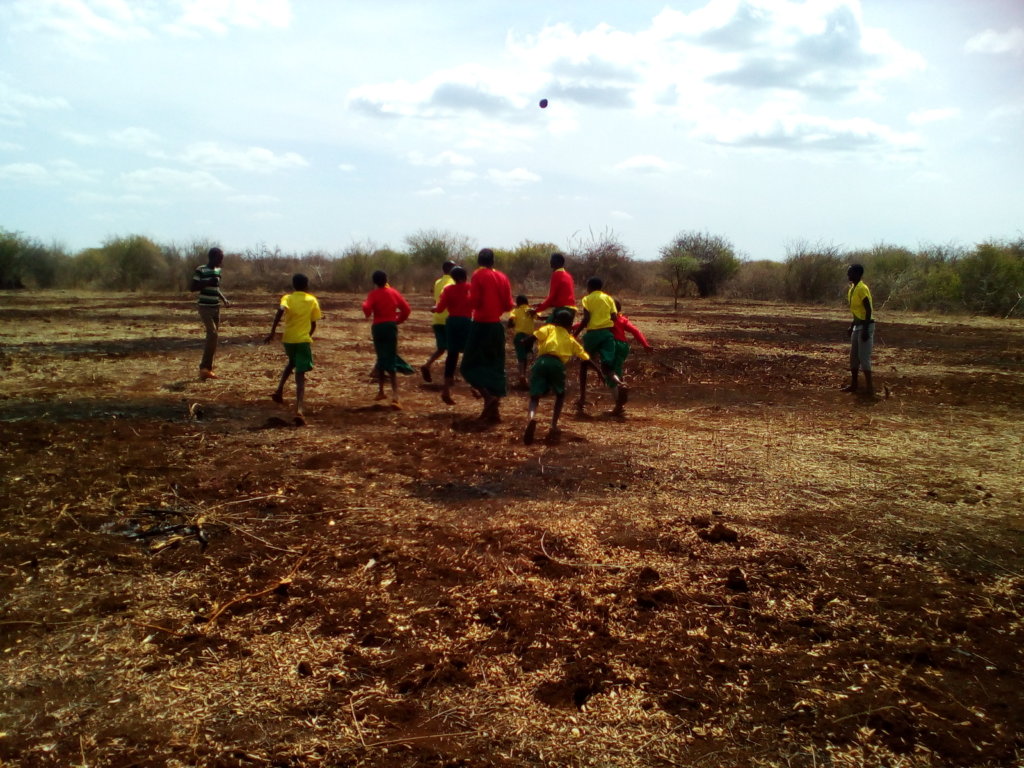 Donating through GlobalGiving is safe, secure, and easy with many payment options to choose from. View other ways to donate
Horn of Africa Development Initiative - HODI has earned this recognition on GlobalGiving:

GlobalGiving
Guarantee
Donate https://www.globalgiving.org/dy/cart/view/gg.html?cmd=addItem&projid=6848&rf=microdata&frequency=ONCE&amount=25
Please Note
WARNING: Javascript is currently disabled or is not available in your browser. GlobalGiving makes extensive use of Javascript and will not function properly with Javascript disabled. Please enable Javascript and refresh this page.