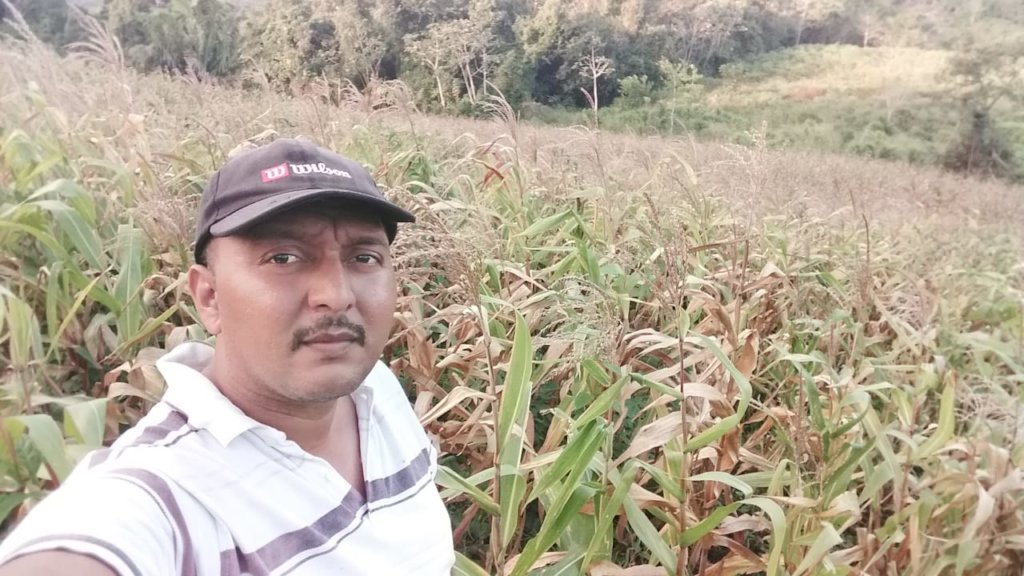 Manuel with his plot of land.

The town of La Conquista belongs to the municipality of San Miguelito in the southeast department of Río San Juan, Nicaragua, and is only 13 kilometers from the main highway that connects to the capital city of Managua. It was founded in the early 1990s by families who were repatriated from Costa Rica by the UNHCR (United Nations High Commissioner for Refugees) when the war between the Contras and Sandinistas ended.  They were resettled in this territory.

It is a small rural community with 65 homes and about 40 families dedicated to livestock, agriculture, commerce and business. Some 15 families are dedicated to planting basic grains, such as rice, beans and corn.  Being a mountain community, it is divided into two sectors. Today, due to the lack of opportunities, many of these families have migrated back to Costa Rica in search of new horizons.

Manuel, who has known about Self-Help International for years, was the leader of the Water and Sanitation Committee (CAPS) in the community of Empalme de Cruz Verde, and has participated in many of the seminars taught at the Fred W. Strohbehn Training Center. He was transferred to the community of La Conquista to be the pastor of the evangelical church in the community.

He was concerned about the situation of the farmers there, and invited Self-Help’s Nicaragua staff to La Conquista to present a seminar on corn production, the Quality Protein Maize (QPM) variety, the technical management of corn, and the double row planting technique.  Manuel is part of the group of farmers who receive messages about the corn program through their cell phone using the WhatsApp application.

The seminar was attended by about 15 corn farmers in September 2018, and everything related to corn, including nutritional value, agronomic management, production costs, double row planting, harvesting, post-harvest management, etc., was addressed. The attendance and participation of the farmers was excellent.  Manuel told Self-Help staff that most farmers there do not use nitrogen fertilizers of any kind due to their low financial resources.

Manuel’s plot is well away from the houses of the community, but it is the best plot using the double row planting.  He practiced all of the techniques he learned in the trainings except applying fertilizer. Manuel plans to get a plot near the road and plant 0.25 manzanas with both techniques, single row and double row, with and without fertilizer. This plot will be used to demonstrate the effectiveness of the two planting and management systems.

Some of the farmers in the community spoke with Self-Help International Nicaragua staff, and shared which techniques they did and didn’t implement during the growing season.  They also shared a little bit about their setbacks and how they can improve next time to improve their yields.

CASE 1: When Self-Help staff interviewed a farmer named Narciso, he talked about what he did and didn’t implement from the trainings, and some of the lessons he learned for the next planting season.

"With this INTA-Nutrader improved corn variety, I can produce up to 45 quintals of corn per manzana (2 tons), while with the native or creole variety I barely harvested between 16 and 20 quintals per manzana (1 ton), without fertilizer,” Narciso said at the beginning of the planting process.  “Now I will monitor the whole process: getting the soil ready, protecting the seed (that is, applying a strong insecticide), directing the planting, etc. I'm going to improve the management system, and I think I can get twice the yield from the corn. I imagine if I applied fertilizer, it would triple. "

In Narciso’s case, he decided to plant the INTA-Nutrader seed and he explained to his workers how to carry out the sowing.  However, he was not present during the planting of the double-row corn, and in the end the distances were not correct. He also did not apply fertilizer.

He was discouraged.  However, Narciso learned a valuable lesson and said, "Next time, I will oversee and monitor the entire process from preparing the soil, and I will participate in and direct the planting, etc., which will improve the management system."

He calculated that he can produce twice the yield of corn, that is, about 45 quintals per manzana (2 tons), without fertilizers. This would significantly double his traditional yield from the creole corn variety, by adopting the INTA-Nutrader variety (QPM) for its adaptability and performance in the region.

CASE 2: Another farmer, Esmero, talked about his experience using the INTA-Nutrader variety (QPM), and also discussed some his setbacks.

"The seed is of very good quality.  I saw it sprout and it has good vigor.  However, I was careless, and I had a lot of ants that caused me problems. I only had a few plants left,” Esmero said.  “The truth is that I paid for the planting, got discouraged and left it. But, even so, in three quarters of a manzana I am going to get about 20 quintals of corn (1 ton) for home consumption ."

Esmero participated in the seminar held in the community and planted INTA-Nutrader in a single row, and noted the strength and vigor of the seed.  According to him, the seed was of very good quality. However, the work of cleaning the field before the planting, or eliminating weeds, was done very badly.  When the corn was planted, the ants did a lot of damage and destroyed some of the plants.

For Esmero, the lesson learned was that, "Next year I will improve the soil preparation, planting, care and management, and above all delegate this responsibility well or watch and direct all the work myself.  I'm going to do it better."

CASE 3: Larry, another farmer from La Conquista, planted a manzana with the single row technique, without fertilizer.  Normally, in this community farmers harvest between 16 and 20 quintals of corn (1 ton) per manzana, however, this year Eliecer decided to plant the INTA-Nutrader variety in the same traditional way, at 2 kernels per hole, with 40 centimeters between plants and 80 centimeters of space between rows.

"I believe that I am going to harvest between 40 and 45 quintals of corn (2 tons).  That is more than twice as much corn, just by changing the corn variety and maintaining the planting system.  I like it, and I think that next year I will improve on it,” Larry said.

"We bring the QPM seed corn to farm families where nutrition and food security are fundamental, and we promote better nutrition for children and the elderly.  In our seminars and workshops, we collaborate with farmers to share new knowledge, we improve and modify some agricultural practices, and we exchange experiences among farmers.  We have designed a planting scheme with a high seed population in the quest to double or triple the corn yields and income. With these three approaches, we reduce hunger and malnutrition, increase knowledge among farmers, increase their yields and incomes, and reduce the effects of climate change that Nicaraguan farmers are already experiencing," said Jorge L. Campos Solís, Nicaragua Country Director. 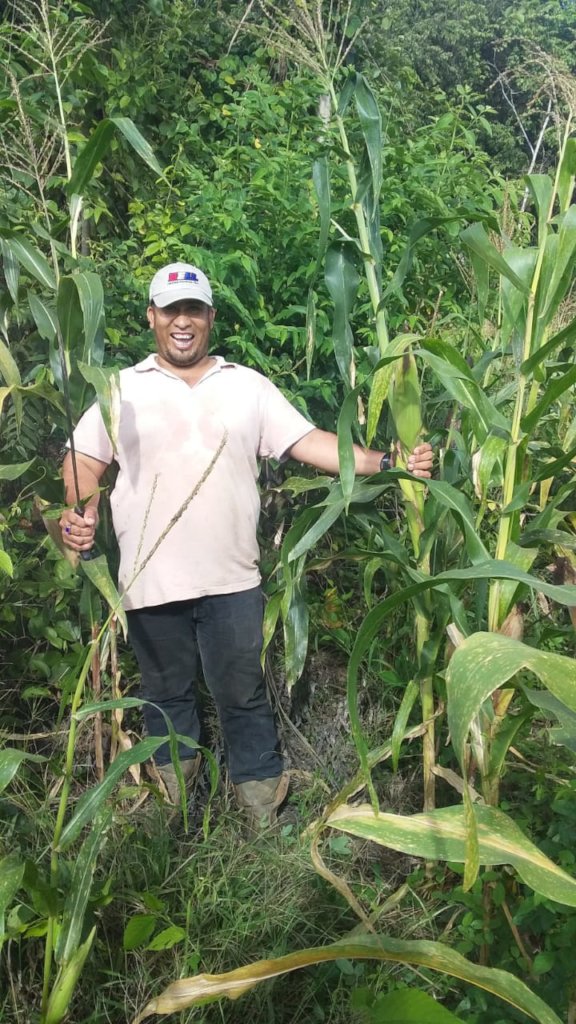 Larry with his corn. 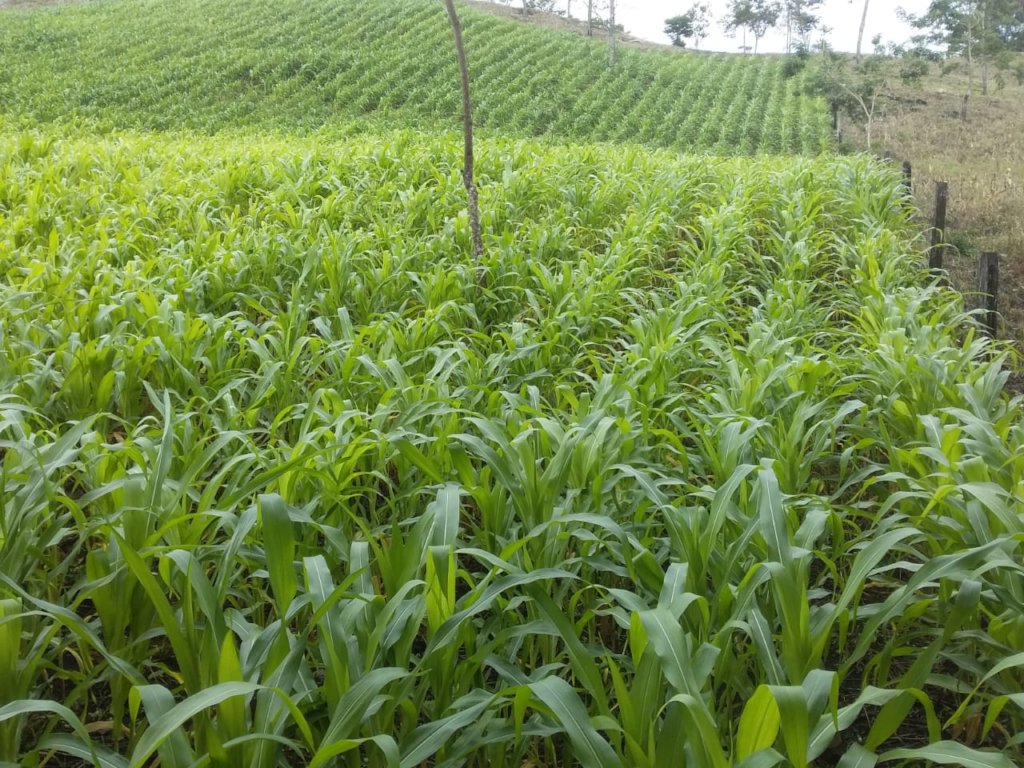 Project Leader:
Katie Seifert
Waverly, IA United States
$4,163 raised of $7,020 goal
You last donated to this project on
64 donations
$2,857 to go
* Amounts in US Dollars
Donate Now
Donate once
Donate monthly
$10
USD
provides seed to cultivate a half acre of Quality Protein Maize to improve family nutrition
›
$25
USD
will provide the plants and drip irrigation for 1 family to start up a home garden
›
$400
USD
Provides inputs and maintenance of the garden & maize demonstration plots for 2 month
›
$2,000
USD
Provides security & maintenance of the maize and bean experimental plots for one year
›