Self-Defense and Yoga for Refugee Women on Lesvos 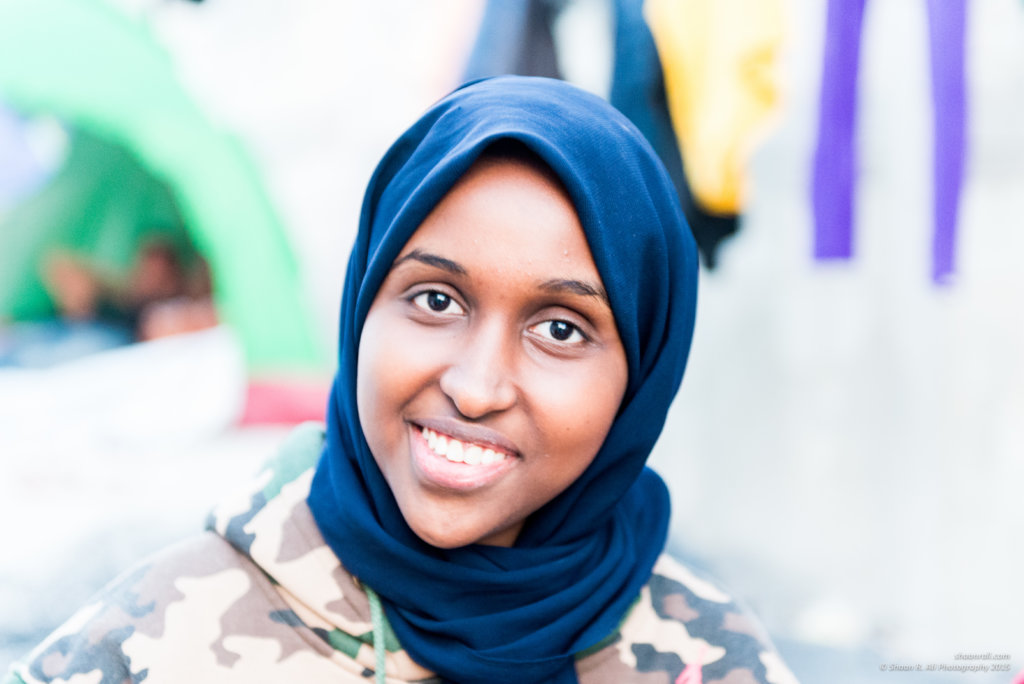 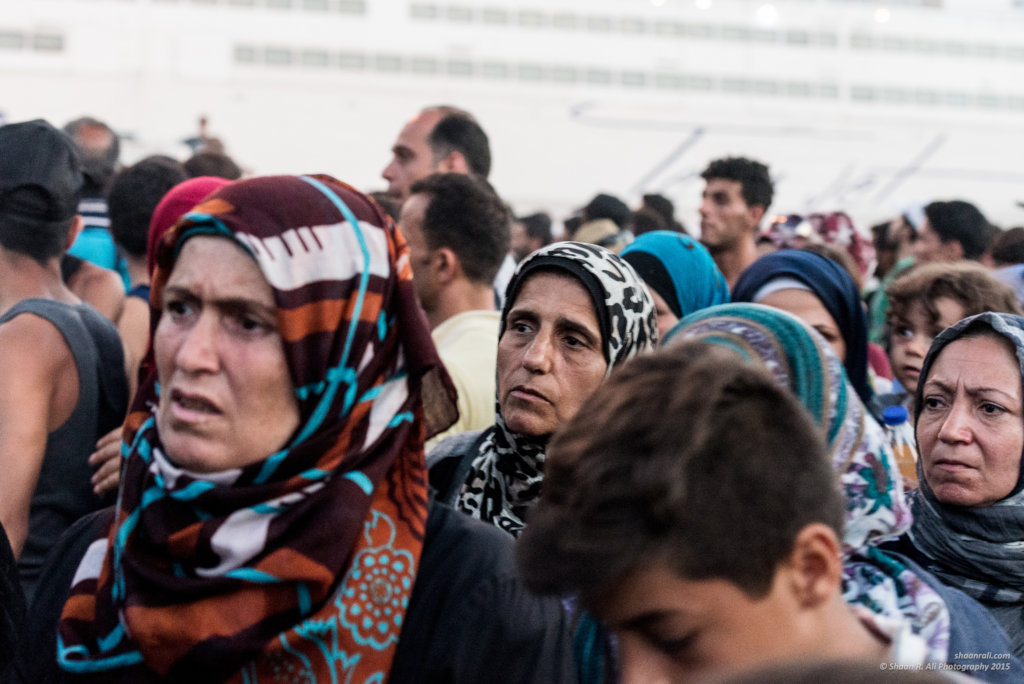 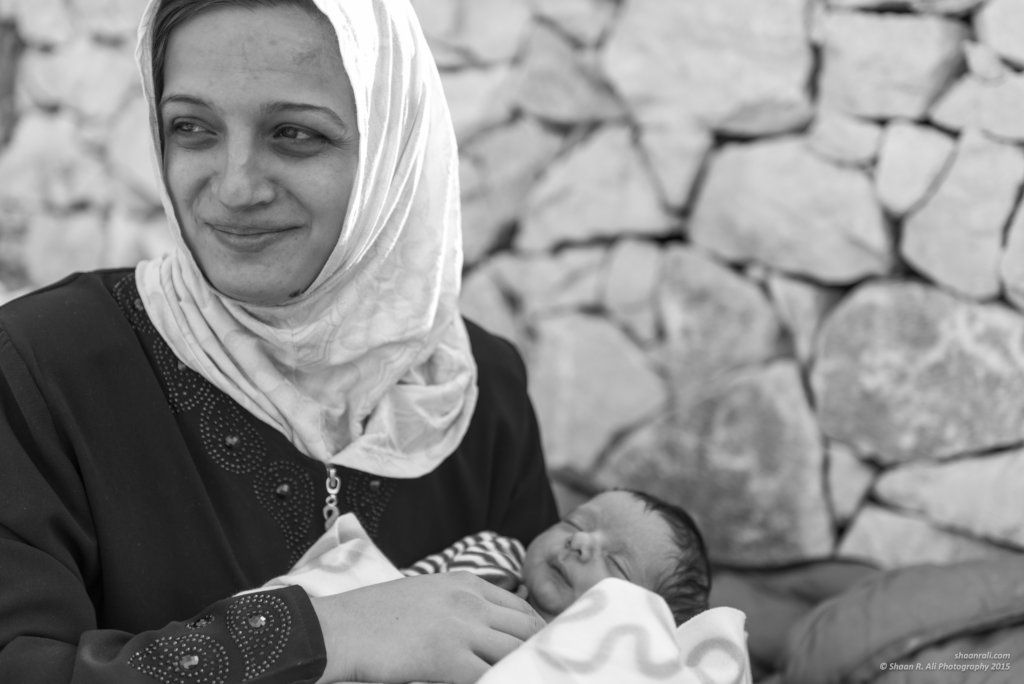 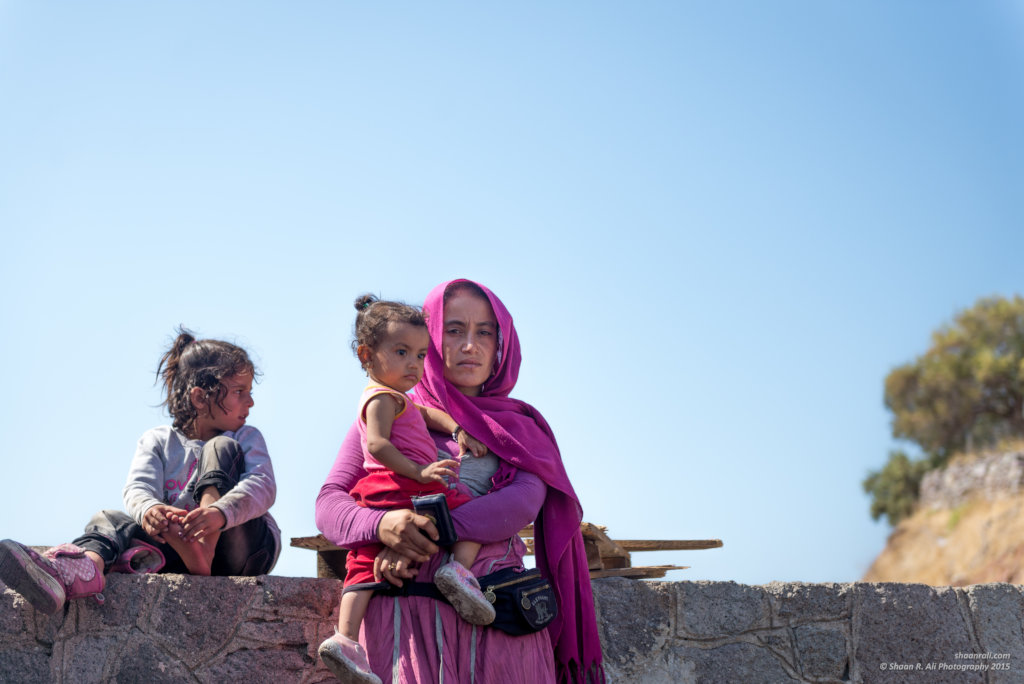 our next self defense weekend course

By Hannah Starfish Foundation - Self defense weekend for refugee women. 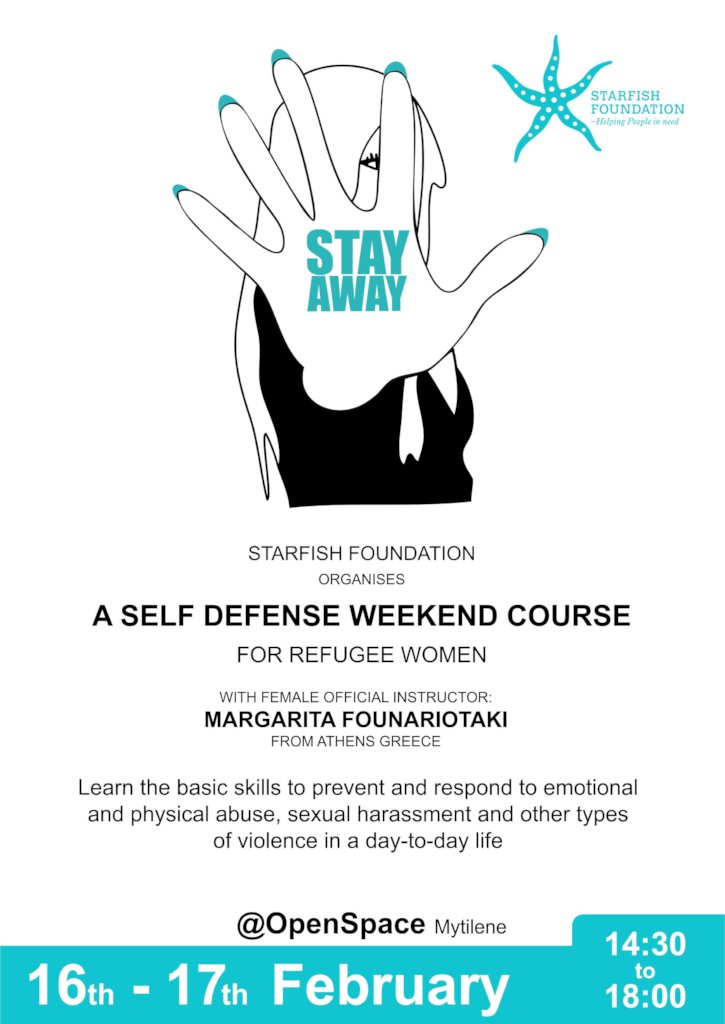 We are pleased to announce that a self-defense weekend for refugee women is taking place in Mytilene town on the island of Lesvos, on the 16th and 17th of February 2019

Margarita Founariotaki from Athens, Greece who is an official International Krav Maga Federation instructor, will be our special guest and teacher.

Women living in refugee camps are enormously vulnerable, because they are a minority surrounded by men with insecure futures : this often causes stress and frustration that is expressed in agression. For this reason Starfish Foundation organises self-defense courses for women only.

During the course the women will learn how to say NO in a clear way, how to be aware of their surroundings and to prevent and respond to specific threats, including emotional, physical and sexual harassment. 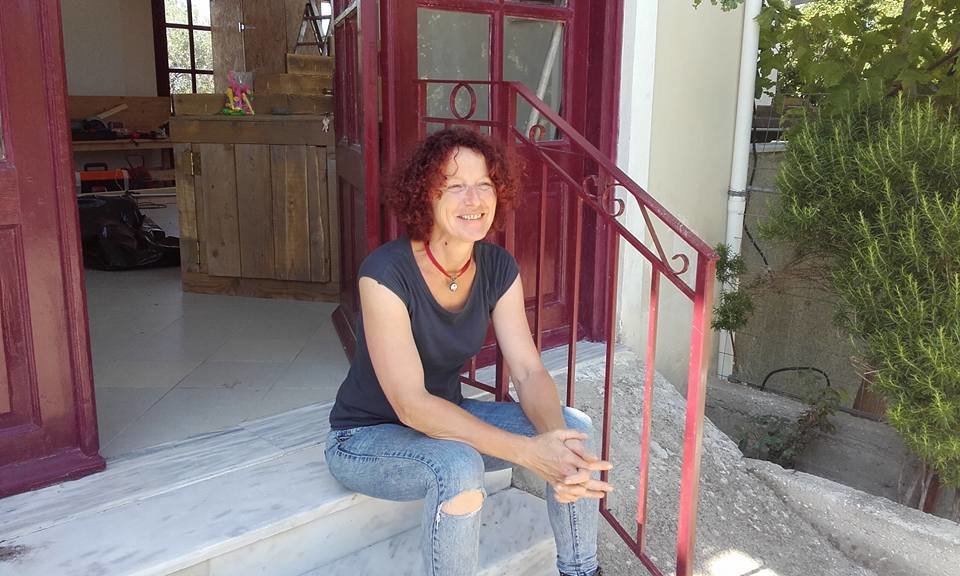 Hannah Ulijn has lived in Lesbos for twenty-five years. She is married and the mother of two sons. Since 2008 when the first refugees began arrive on the island, she joined with a group of friends in the village of Molyvos to organise immediate basic help, handing out food, clothes, shoes and blankets. In 2015 at the height of the refugee crisis, she was one of the founding members of Starfish Foundation. Together with a group of enthusiastic volunteers, she organized the distribution of donated items from all over the world. Hannah is now are project manager for the Self-Defense project of Starfish. She states, “This project is needed because the Moria camp is a very frightening place for women, given that the majority of the residents are unaccompanied young men. Our program will teach women how to say ‘no’ to violence and threats of violence.”

What i gained from this project

My name is Dina, and I have been a member of Starfish Foundation since its creation in October 2015! I have been involved in humanitarian work since 2007, and I find it very rewarding, but at the same time, I have to face difficult issues.

I have felt discriminated against because of my involvement with the refugees. In the past, I was verbally attacked and threatened by someone who didn't like it when I stood up for myself and my work in a discussion about the refugee situation here on the island. It was frightening, and it took me a long time to move forward.

My recent participation in the women’s self-defense course, sponsored by Starfish, not only taught me the skills to defend myself but also made me feel more confident in knowing that is my right to say NO. It was encouraging to see that the women refugees who took part in the course felt the same need to learn how to protect themselves. Moria camp can be a very threatening environment for women, and I am happy that Starfish offered to help them.

The women in my group were mainly from Somalia, and after the initial shyness, everybody started sharing experiences. I couldn't help to think that it doesn't matter what colour, religion, background or status we have. At the end of the day, we are all the same...we all have our fears and hopes, and as women, we all want to feel safe and to be treated with respect and love.

My body can do things I didn't know it can do

By Anat Errel - Self Defense Instructor 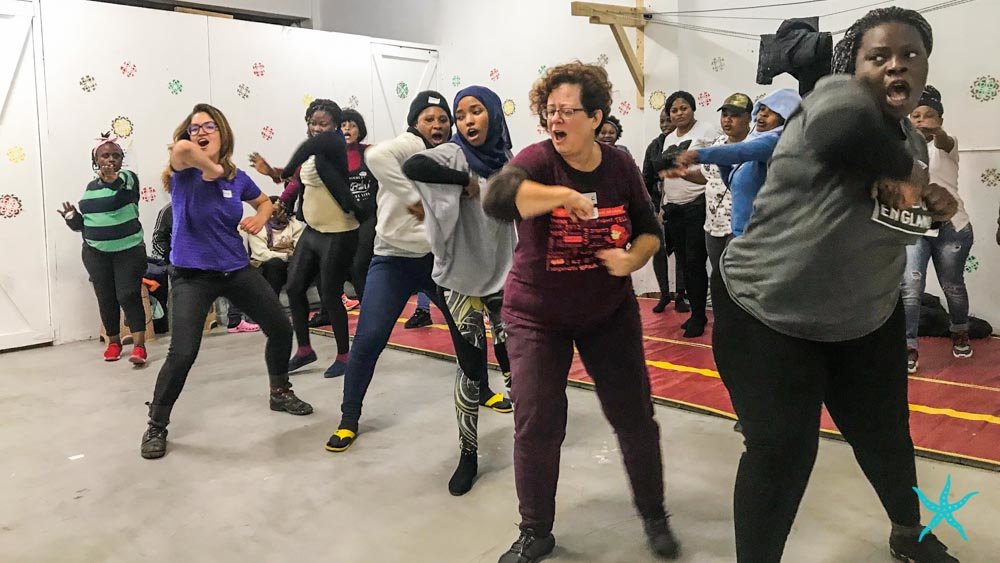 I learned to feel strong inside my body

Yesterday I got back after spending six day in Lesvos, Greece, teaching Empowering Self Defense to refugees from camps on the island.

During those days I taught three full ESD coursed and one introduction to self-defense class. The participants were refugees from different countries, as well as foreign and local volunteers and local women.

All in all, the ESD message was passed to 70 women, coming from 16 different countries, in 7 different languages.

The women laughed, learned to yell, move their body, put up verbal barriers, say NO, walk in a safe and alert way, trust themselves and their body and defend themselves with different ESD tools.

The first group was for Somalian women. I spoke English, which was translated into Arabic by an Iraqi translator, then to two different Somalian dialects by women from the group. In addition, there were also two Greek women, one translating for the other; one Australian and one American.

The second group was for Afghani girls, age 14 and up. The translator was a 16-year-old Afghani girl who learned her perfect English during her one year stay in Moria. There was also an African French-speaking woman who had her own French translator, as well as two Spanish and one Swiss volunteers.

The third group was mixed. A group of young Arabic speaking girls, I think from Syria, with the Iraqi translator, and their Greek care-taker; And a group of Africans from Kongo, Cameron, Guinea, and South-Sudan, speaking English or French, with a different French translator. Also, in this group the CEO of Starfish organization who was the one responsible for me being there, with her Greek daughter,

The forth group was some more Afghani girls residing in Moria’s “Safe zone”, where unaccompanied minors live.

I want to share some of the feedback I got from the course’s participants:

“I learned that in any situation I should be careful, but not afraid”

"I learned to feel strong inside my body”

"I learned I can say NO without giving excuses”

“The course made me happy, and I learned to be strong and safe”

"we learned to solve problems with talking, not with our hands”

"I can fight for myself and be strong”

"I learned about the way we see women. I learned we have the right to defend ourselves and not be under control”

"We are strong, we can think and do without someone telling us what to do”

"I didn’t know I can defend myself from someone struggling me from the back, and it is important for me to know that”

One Afghani girl told us:” I have a good friend that’s been courting me for the last few months. I’m not interested and I tried to wiggle out of it with excuses.

After the class, I went to him and said: ‘look, I like you, and there is a girl for you somewhere, But this girl is not me’.

Then she added with a smile: ‘He accepted what I said so simply that I thought it was silly of me to try and wriggle myself out of this all those months’”.

I’ve has a moving experience, I’m sure it will take some time for me to digest all the experience and people I’ve met. It was amazing to meet the human spirit and the ability of people to be joyous after all the horrors they’ve been through; the will of people t help and give, sometimes while paying a heavy personal price; The ability of people who were torn from their homelands and are now, more or less, living through hell, to improve the leaving condition and help other people in their state.

I met the human evil in its worst, and the human goodness in its best.

I’d like to thank the women that made this happen: Melinda McRostie of Starfish organization in Lesvos, and Yudit Sidikman of ESD Global. Without their support and vision, it would not have happened. 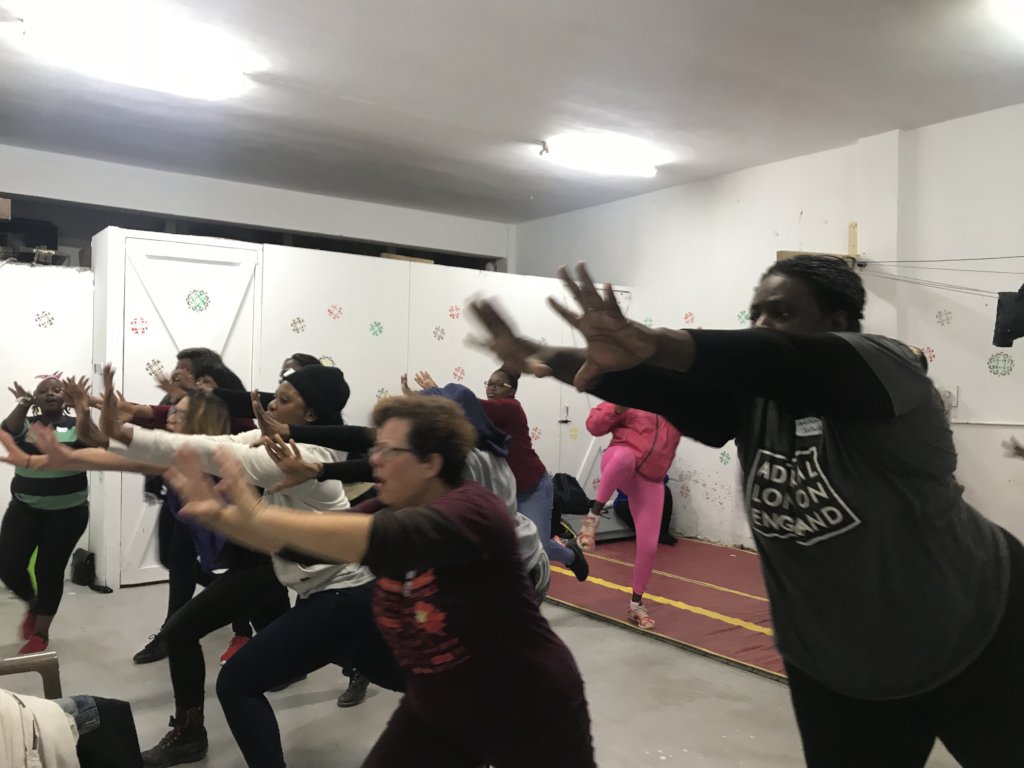 Get the strength to say no

We learned in every situation we should be careful but not scared.”

At the end of each self-defence class, our instructor, Anat, asked the women what they learned. And let us be clear, they learned a lot. These sessions were packed full of not only useful tactics for physical self-defence, but also techniques to deter potential assailants.

Use your voice.
Use it loudly.
Use it strongly.
Pay attention.
Trust your gut.

And in a dangerous places such as overcrowded refugee Camps, these tactics are key. The women taking our classes –single women, traveling without family or support –are particularly vulnerable. And the reports and statistics on rape, sexual assault, and sexual harassment in refugee populations are both countless and discouraging. But by teaching women techniques to protect themselves, physically, mentally and emotionally, we can help turn this around.

We want to continue bringing this knowledge to the women living here on Lesvos, but we can’t do it without your support.

Support another project run by Starfish Foundation that needs your help, such as: 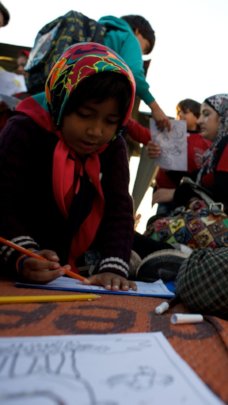 Support a Library To Empower Refugees in Camp
Find a Project

GlobalGiving
Guarantee
Donate https://www.globalgiving.org/dy/cart/view/gg.html?cmd=addItem&projid=32077&rf=microdata&frequency=ONCE&amount=25
Please Note
WARNING: Javascript is currently disabled or is not available in your browser. GlobalGiving makes extensive use of Javascript and will not function properly with Javascript disabled. Please enable Javascript and refresh this page.