By Chris Jarrett - Donor and supporter 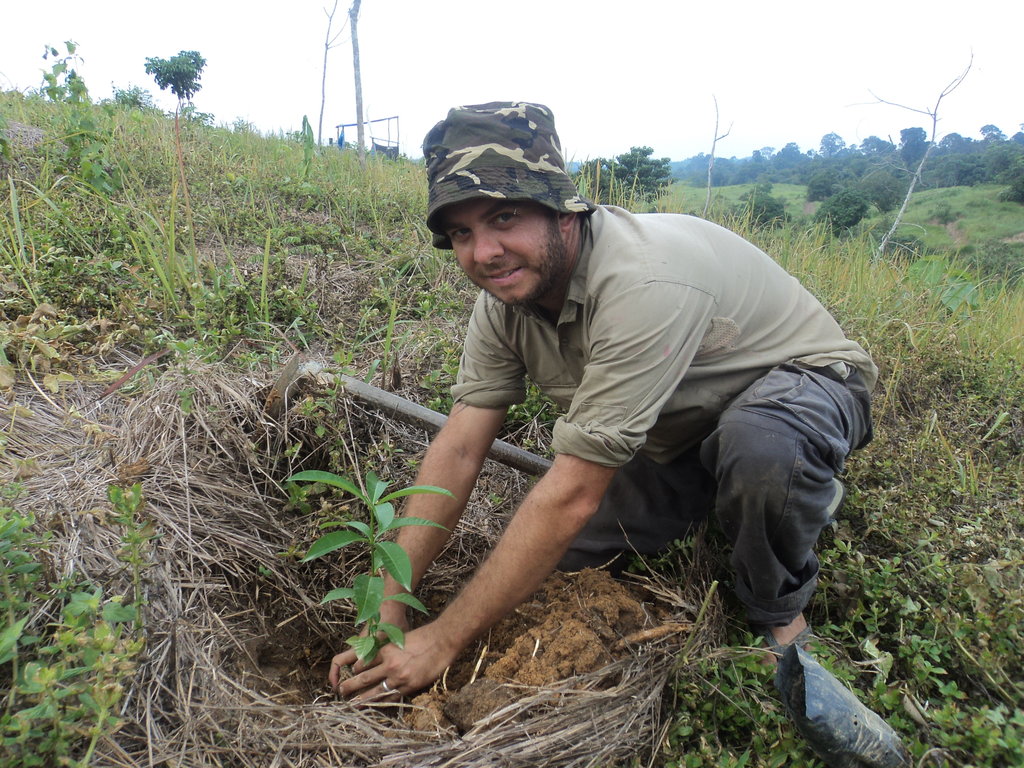 Chris planting a tree at Besitang

"After many months fundraising and organising my trip to North Sumatra I was jumping out of my skin. I was finally taking off on an adventure of a lifetime. This was my opportunity to see firsthand the impact my donations to the forest restoration project in Sumatra were having.

As I touched down in Medan I was welcomed by Panut Hadiswoyo, Founding Director of the Orangutan Information Centre (OIC), SOS's project partners. His commitment to protecting and restoring orangutan habitat in the Gunung Leuser National Park is an inspiration. So much so that he was recognised by the United Nations as a finalist in its Hero of the Forests Award earlier this year.

That night Panut took me out for a traditional Sumatran dinner and to explore the sights, sounds and smells of chaotic Medan.

When I arrived on the project site the next day I was greeted by all the OIC staff and the first thing I noticed as I explored the site was the diversity of the natural regeneration coming up and how close the primary rainforest was to the project site.

Throughout my week I shared a two story bamboo hut with the OIC Restoration Team (and the local insect population).

The Gunung Leuser National Park is an amazing place and I was lucky enough to see Hornbills, Gibbons and Thomas Leaf Monkeys. In the afternoons I could hear the long call of the male Orangutan which was a memorable experience.

As it was the dry season I assisted the restoration team in seed collecting, nursery work and maintenance of previous plantings.

I was shown around the project site by head of the OIC Restoration Program Ahmed Azhari (Ari). His knowledge of rainforest restoration and commitment to the project is a great inspiration to anyone that visits the site.

Over the past four years SOS and OIC have planted 398,692 trees over 196 hectares of National Park in the Besitang region. The growth rates of the trees throughout the project site are astounding. Some are now over four metres tall. The onsite nursery was also impressive with a wide diversity of plants ready to be planted out.

A highlight of my trip was when we were trekking in the nearby rainforest taking in the sounds and wildlife. We discovered some fresh orangutan nests and Ari noticed some orangutan poo on the ground so we collected it and took it back to the nursery. This was a great discovery as from these seeds the Restoration Team can discover what species of fruit and tree the orangutan has been feeding on.

Having seen the project site for myself I now know that the orangutan has a fighting chance to survive in the Gunung Leuser National Park. With continued support and awareness, we can help fight the deforestation of Indonesia’s rainforests."

We aim to match (if not exceed) original levels of species diversity, ecosystem structure and ecosystem function, whilst planting and encouraging natural regeneration of tree species that are indigenous to the Leuser forests. Building the capacity of the local community to become stewards of the replanting programme and guardians of the forest is a central element of this work. Despite some minor setbacks, including drought and floods damaging planted trees, the project is going from strength to strength.

We are optimistic about the future of this area of critical habitat, and are looking forward to the day when every last hectare that has been lost is well on the way to being rainforest once again.

As always, we wish to thank everyone who has supported this work. We're really proud of the impact we're having, but of course there's a lot more land that needs to be reforested, so please keep supporting and sharing!

UK Director
Abingdon, Oxfordshire United Kingdom
$135,611 raised of $200,000 goal
You last donated to this project on
2,302 donations
$64,389 to go
* Amounts in US Dollars
Donate Now
Donate once
Donate monthly
$10
USD
could plant a tree seedling which will one day provide food and a nesting spot for orangutans and other wildlife
›
$35
USD
could plant 5 trees. We'll plant a mixture of tree species to help bring back the diverse natural rainforest ecosystem
›
$64
USD
could plant ten trees, helping to attract birds and animals back to the area, which in turn help the forest recover
›
$80
USD
could buy a tonne of organic compost, vital to nourish and nurture the new seedlings
›
$400
USD
could buy a camera trap so that we can monitor wildlife returning to the restoration site
›
$3,250
USD
could build a field station and new tree nursery, where the restoration team nurture the new seedlings before they are planted
›