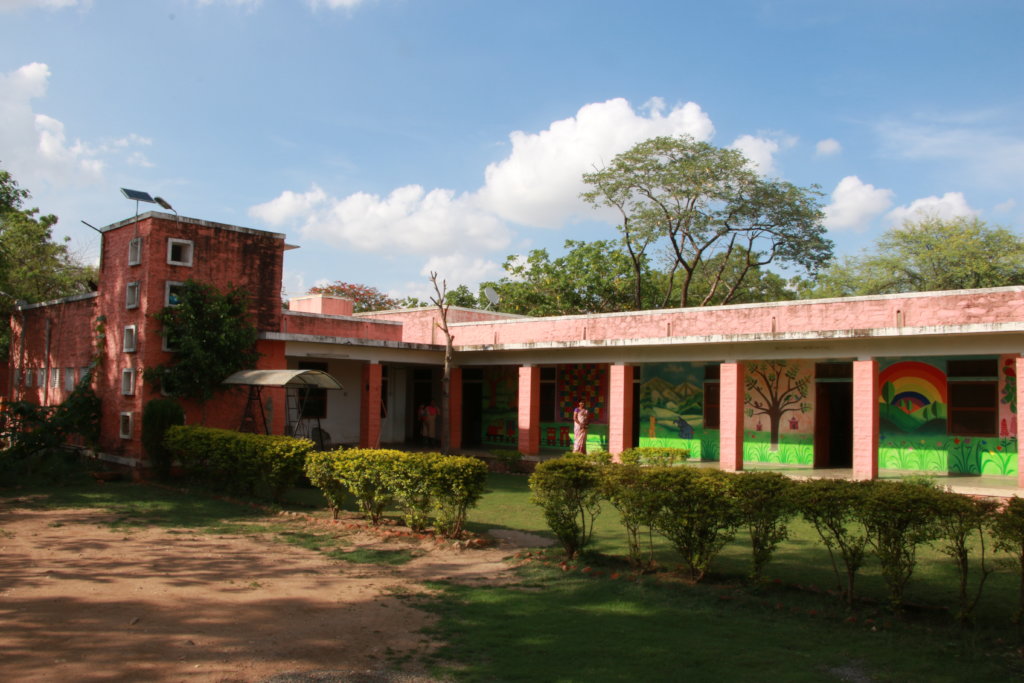 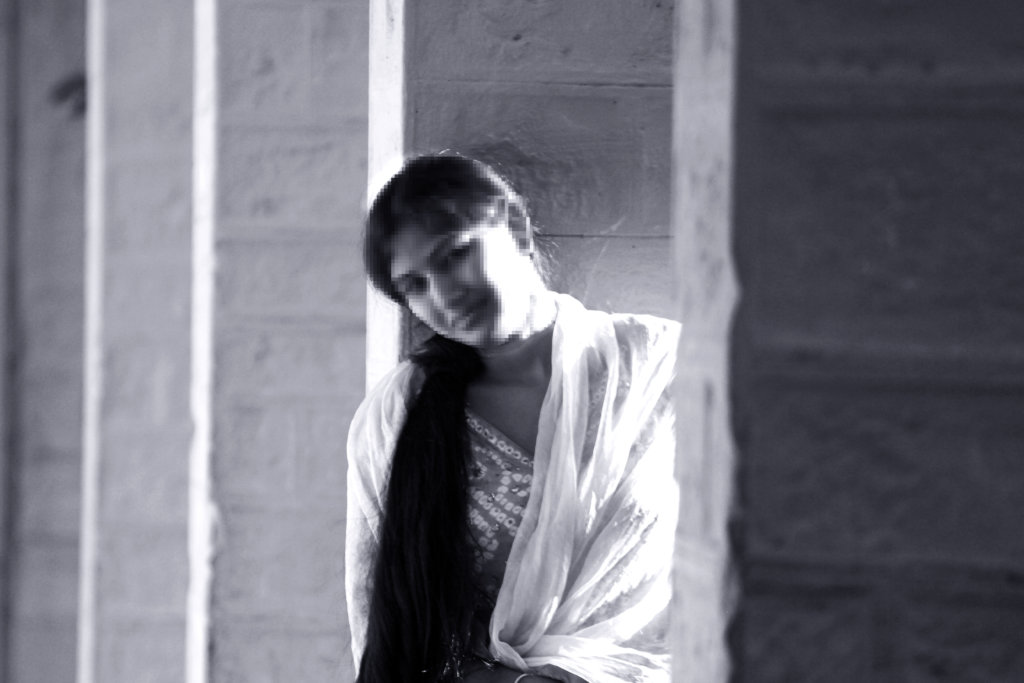 Hina (name changed) is one several abused woman helped by Seva Mandir. She was a teenager when she was married to Asif (name changed). He was an average-looking man in his mid-30s. Hina, on the other hand, was a very beautiful adolescent, and that made Asif very insecure.Whenever she used to go out to meet her friends he would either accompany her or follow her. Soon Hina started to feel suffocated. She wanted to escape from the cage created by her husband and she told him so, but instead of understanding he beat her badly. She had had enough and finally left to stay with her parents, but they refused to support her. She had nowhere to go for help. Then, through a friend, she got to know about Seva Mandir’s Shelter Home, a shelter for abused women, and approached us for help.

Asif’s insecurity reached a different dimension when Hina left home. He kept a close watch on her even when she was living at the Short-Stay Home. He used to follow her whenever she went outside the shelter. Observing his behaviour, Seva Mandir intervened and counselled Asif and tried to make him understand that he should give Hina some freedom.

Sometime, counselling makes a huge difference. Slowly Asif began to understand that his insecurity was at the root of all the misery. Hina finally felt able to give their marriage a second chance and now they are living together. Timely counselling helped bring the couple back together.

According to the United Nations Population Fund Report, around two-thirds of married Indian women are victims of domestic violence. This is the reported data, but there are many more cases which go unreported because women are afraid of raising their voice as they have nowhere to go for support.

To help women in distress, Seva Mandir runs its Shelter Home in Udaipur city of Southern Rajasthan, and every year around 100 such women are given shelter and assistance with emotional and legal counselling.

Thank you once again for your support. We will send you regular reports about our work in the programme, so that you can keep in touch with our progress. I hope it will bring you happiness to see how life-changing your help really is.

We request you to extend your support during the week of April 3rd to 7th, in which Global Giving will be matching donations in Little by Little Matching Champaign . There will also be a 200% match for new recurring donations started during this week!

To make a donation, please click the link    https://www.globalgiving.org/projects/provide-safe-homes-to-130-abused-women-in-india/

Should your travel bring you to this part of the world, please do consider visiting us. For any feedback / suggestions, please visit me at atul.lekhra@sevamandir.org

Thank You for Bringing Hopes to Women in New Year 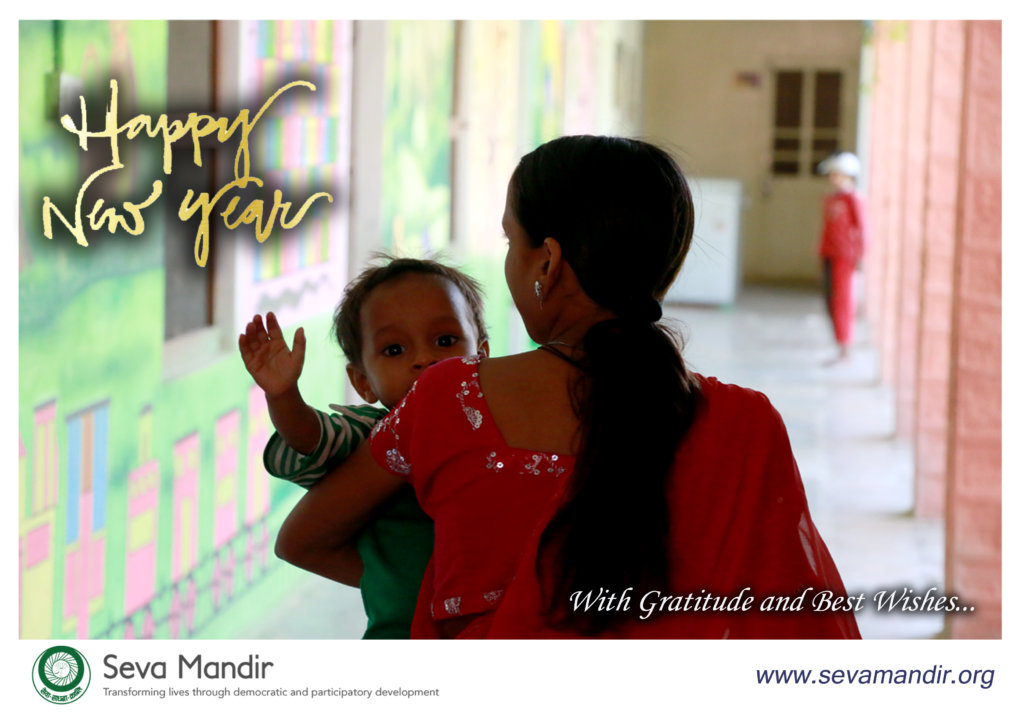 Thank you for your support to our project ‘Support Abused Women in India’.

With your support we began a new year and are excited about the hopes and surprises it will bring. YOUR support is bringing real changes in the lives of these women and their children.

With your support last year 99 women of various age groupswere given shelter along with their 53 children. We are able to make this progress only because of the support from YOU.

We request you to sign up to a monthly donation by clicking on recurring donation of an amount that you want to give and help us to make sustainable progress in coming year.

We look forward to your continued support. Please do consider visiting Seva Mandir when possible. Once again, wish you a very Happy New Year to you and your family. 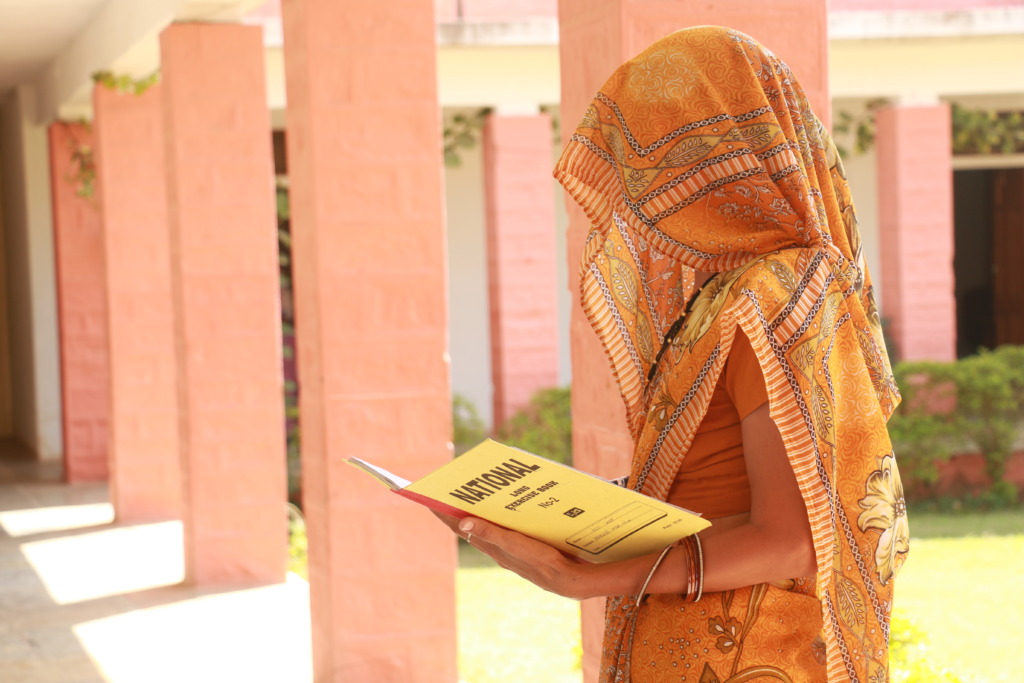 Many women who leave an abusive household lack support from their family or community. A short stay home then provides women and girls a safe place to live, and offers counseling and legal advice. It is an integral component of Seva Mandir’s strategy to deal with violence against women and is therefore a very important intervention.

Rekha (name changed) is one among the many women who are supported by Seva Mandir. She was born in Chittorgarh in 1993. She has a master’s degree in political science. After falling in love with Ramesh, she eloped with him on the 5th of March, 2016. After getting married, they returned to his home. That is where problems began. Because she belonged to a different caste, his family ostracized her. Particularly, his sister, Geeta, was not happy about their marriage. She would constantly use derogatory language with Rekha. If they were ever together in a room, her sister would accuse her of trapping Ramesh. Her sister would additionally try creating problems between Rekha and Ramesh. She would feed Ramesh false information about Rekha having affairs, and telling him that Rekha would beat her. This created tension in their marriage. Rekha was very unhappy and emotionally distraught, because she would always be spoken to in a condescending manner, from morning until night.

Then finally, one day Geeta forced Ramesh to file for divorce. She told her brother that if he didn’t sign the papers, she would kill herself; he needed to choose between his sister and his wife. He signed the papers. Therefore, Rekha was left homeless. Her family wouldn’t take her back in because she left home without their approval.

This represents a larger issue that reoccurs often. Inter-caste love marriages are common amongst the women who come, stay at the Short Stay Home. It is viewed as a societal problem, which often results in these women getting kicked out of their home, and not being able to return to their childhood home.

Like Rekha, in the past twelve years, many women were given shelter along with their children. Due to prolonged harassment and violence, most women coming to the Short Stay Home are depressed, hence various activities are undertaken to help them come out of this. Also they are connected to economic activities so that they can lead a respectable life later.

We thank you for your continuous support in helping women like Rekha to restart their lives in a dignified way.

The Courage to 'Say NO' to Violence 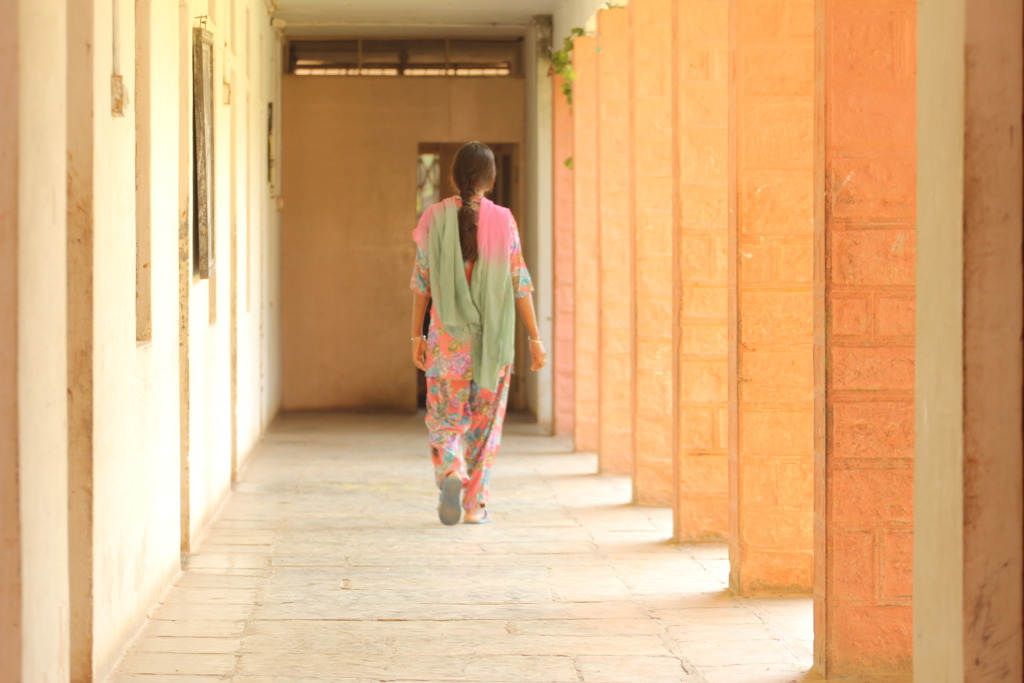 The Short-Stay Home (SSH) is a shelter which seeks to enable women to move out of oppressive and violent situations. It helps rehabilitate women and girls facing different forms of violence through the provision of shelter, medical aid, legal aid, counseling services and educational support to children staying with their mothers. It is an integral component of Seva Mandir's strategy to deal with violence against women and is therefore a very important intervention.

In the past year, many women of various age groups were given shelter along with their children. Of the 105 cases of harassment, addiction, mental illness and desertion by family, 93 were resolved through reconciliation with the husband and family, settlement with parents, counseling, employment and linkages with other organizations. This year, with the support of various workshops including pickle making and hair cutting were organized for the women to build their capacities and confidence.

Analysis of the cases handled by the SSH shows that reporting of violence is increasing and that a high percentage of women are abused by their own families for various reasons. There has been an increase of 30% in the number of women approaching the SSH in the last five years (up from 69 to 90). This can be attributed to the numerous efforts made by the programme team at awareness-building meetings, training sessions and campaigns in urban neighborhoods and rural areas.

Kavita (name changed) is one among the many women who are supported by Seva Mandir. Kavita is from one of the village of our working area, who got married when she was in 10th grade (around the age of 15-16). Her husband was an alcoholic and used to beat her often. Kavita refused to tolerate this violence and returned to her parents' house after a year. She then sat the 12 grade exams and passed. Her husband found her and convinced her to return home. But things didn't improve much. He continued to behave violently so she fled once more to her parents' house. She then had the opportunity to attend a five-day training course on gender and life skills conducted by Seva Mandir. As her husband continued to harass her she decided to not to return to his house. Kavita was then persuaded by the youth leaders and Seva Mandir staff started looking for a job for her. She has now found a job and is currently working as hostel warden in Udaipur.

With your precious support we have been and we will able to translate Seva Mandir's commitment into a meaningful change.

We do hope for your continued support to our Shelter Home. We look forward to receive your feedback and comments. Please do reach out to us at atul.lekhra@sevamandir.org. 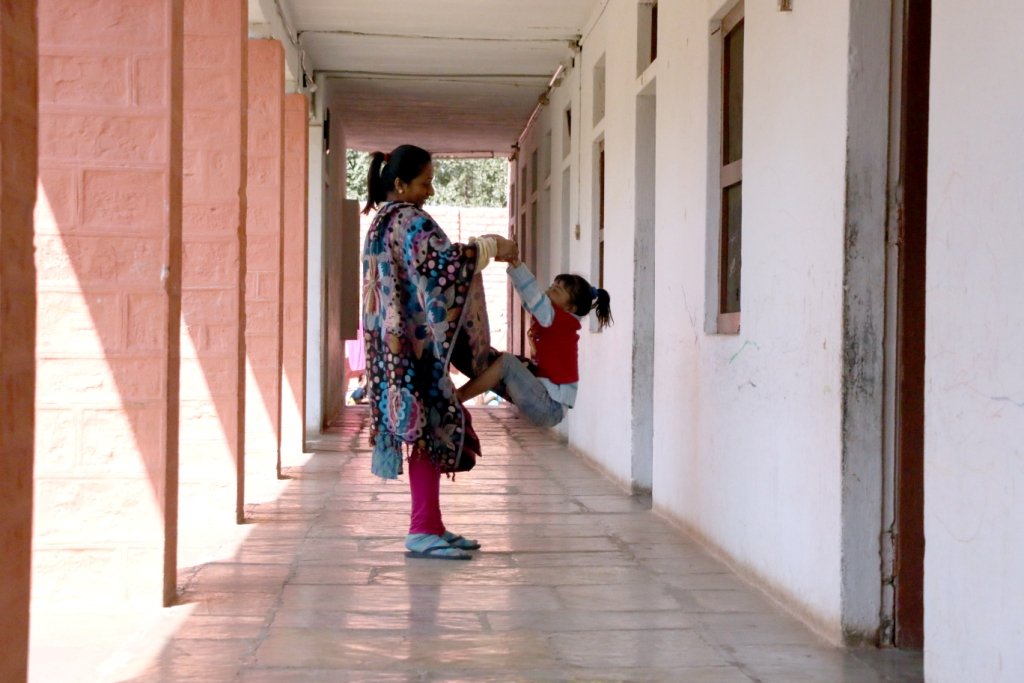 Neha with her Daughter at the Shelter Home

The state of Rajasthan is currently among the top three states with maximum crimes against women. Around forty women are reporting to officials daily that they are victims of domestic abuse. In the area of Seva Mandir’s work (Tribal areas) there are no institutional centers that can directly provide help to the abused women. In an effort to rectify this, Seva Mandir created the Shelter Home for abused women to provide refuge, rehabilitation and empowerment. Last year, Seva Mandir’s Shelter Home accommodated 99 women and has successfully rehabilitated 83 women.

One of the women, Neha (name changed), is empowered by Seva Mandir’s program and is now successfully reintegrated into society. Neha and her husband Rishi are living together for the past three years in Udaipur. Three years ago, they had a very loving marriage. However things fall south fast as the newlyweds have to live with Sanjay, Rishi’s abusive father. Sanjay has extreme mood swings and frequently turns abusive towards Neha and her children. Unfortunately, Rishi’s also commits abuse along with his father. Neha, out of desperation, almost commits suicide after repeatedly suffering abuse.

Due to Seva Mandir outreach efforts Shelter Home employees were able to help remove Neha from that environment and counsel the family successfully.

Since 2004 Seva Mandir’s shelter home has represented an anchorage for women seeking refugee from abuse and violence, giving them access to safety and justice.

On June 15th you have a fine opportunity to make your contribution go deeper to these women in our “Provide a safe home for 130 abused women in India” project! On June 15th 2016, Global Giving is celebrating Bonus Day, and so all donations will be boosted by 50%! [from 9:00:01 EDT to 23:59:59 EDT (time in your city)]. Please join Seva Mandir’s campaign to help end domestic abuse against women by donating on June 15ththrough Global Giving.

With your precious support we have been and we will able to translate Seva Mandir's commitment into a meaningful change, thus helping women to get out from the spiral of domestic violence.

We do hope for your continued support to our Shelter Home. We look forward to receive your feedback and comments. Please do reach out to us at atul.lekhra@sevamandir.org. 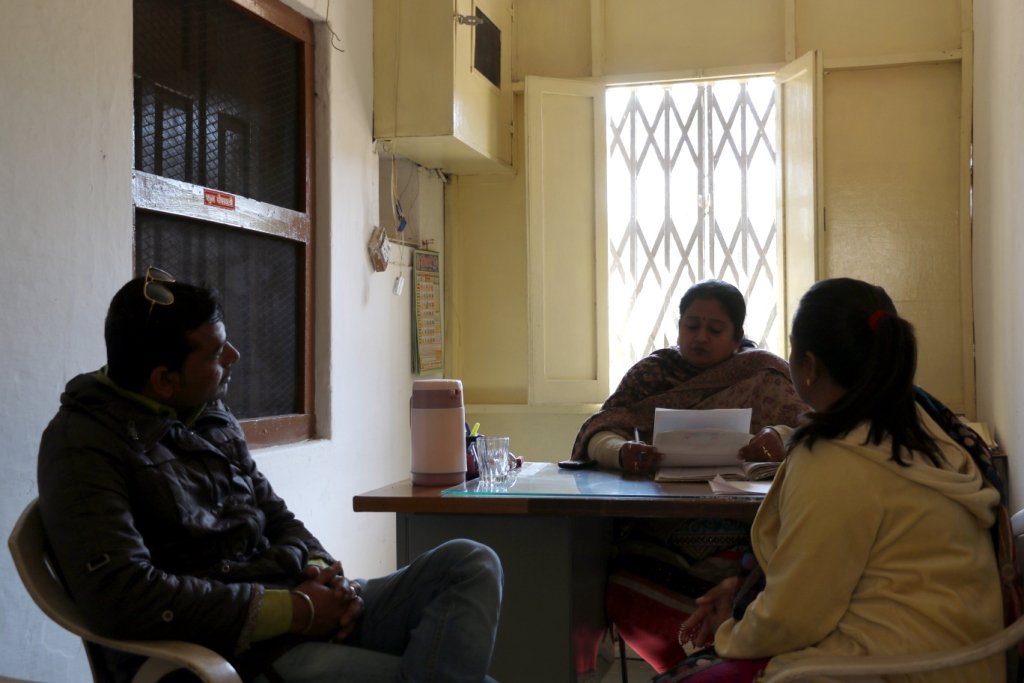 Neha and her Husband during Counselling Session