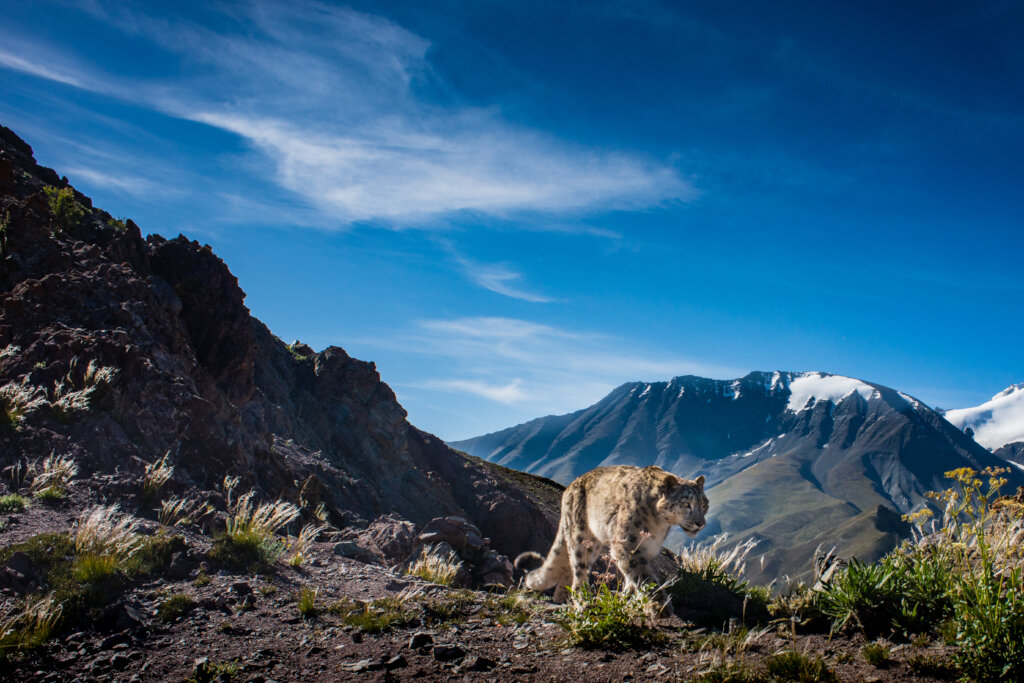 Over the past six-months, David Shepherd Wildlife Foundation (DSWF) has continued to work alongside our ground-based conservation partners in Mongolia and Kyrgyzstan to protect snow leopards. DSWF funding aims to reduce the threats facing snow leopards and its prey species through engaging and empowering local communities who live contiguous to snow leopard habitats.

In Mongolia, DSWF have been supporting a long-term alternative livelihoods project with herder communities called Snow Leopard Enterprises (SLE). The project helps communities to develop handicraft products which it then guarantees to purchase and sell on behalf of the communities. The SLE initiative provides a source of sustainable income and discourages the exploitation of the surrounding environment. Over the past six months, 139 women from 23 SLE communities participated in the programme and received 20% bonuses on their sales as no poaching incidents were recorded. DSWF have also supported a livestock insurance scheme which now covers 12,000 animals and reimburses herders whose cattle have been killed by predatory species and therefore prevents retaliatory killings.

In Kyrgyzstan, DSWF have been working with our partners to ensure local communities are engaged, educated and can benefit from assisting in the protection of snow leopards. Over the last 6 months, DSWF funding has allowed our partners to establish relationships with schools, teachers, local communities and the local government. Three Conservation Education Learning Modules have now been developed and made available to download online and will be an essential resource for educators in Kyrgyzstan and other snow leopard range states.

Whilst some of the in-person education initiatives were put on hold due to Covid-19, DSWF funding allowed our partners to adapt and provide virtual sessions with children from 18 schools. A total of 398 students participated in these sessions which aimed to inspire and motivate the conservationists of tomorrow. 58 students also participated in eight overnight immersive eco-camps in Shamshy valley, the first in-person eco camps to have been held since 2019.

Project Leader:
Theo Bromfield
Guildford, Surrey United Kingdom
$7,927 raised of $15,000 goal
You last donated to this project on
194 donations
$7,073 to go
* Amounts in US Dollars
Donate Now
Donate once
Donate monthly
$20
USD
could fund the GPS data transfer from a snow leopard tracking collar for a month
›
$30
USD
could support a herder's family through the purchase of handicrafts for six months
›
$60
USD
could send one child on a five-day eco-camp to learn the value of conservation and the importance of the snow leopard
›
$100
USD
could support a community workshop to help herders build their capacity and protect their land and livestock
›
$200
USD
provide a conservation bonus to a community for protecting snow leopards and their prey
›
$300
USD
could help to sustain the research team in the field for a month
›
$3,000
USD
could buy a GPS collar for a snow leopard, providing invaluable data to help understand more about snow leopard populations and their movements
›

GlobalGiving
Guarantee
Donate https://www.globalgiving.org/dy/cart/view/gg.html?cmd=addItem&projid=25845&rf=microdata&frequency=ONCE&amount=25
Please Note
WARNING: Javascript is currently disabled or is not available in your browser. GlobalGiving makes extensive use of Javascript and will not function properly with Javascript disabled. Please enable Javascript and refresh this page.