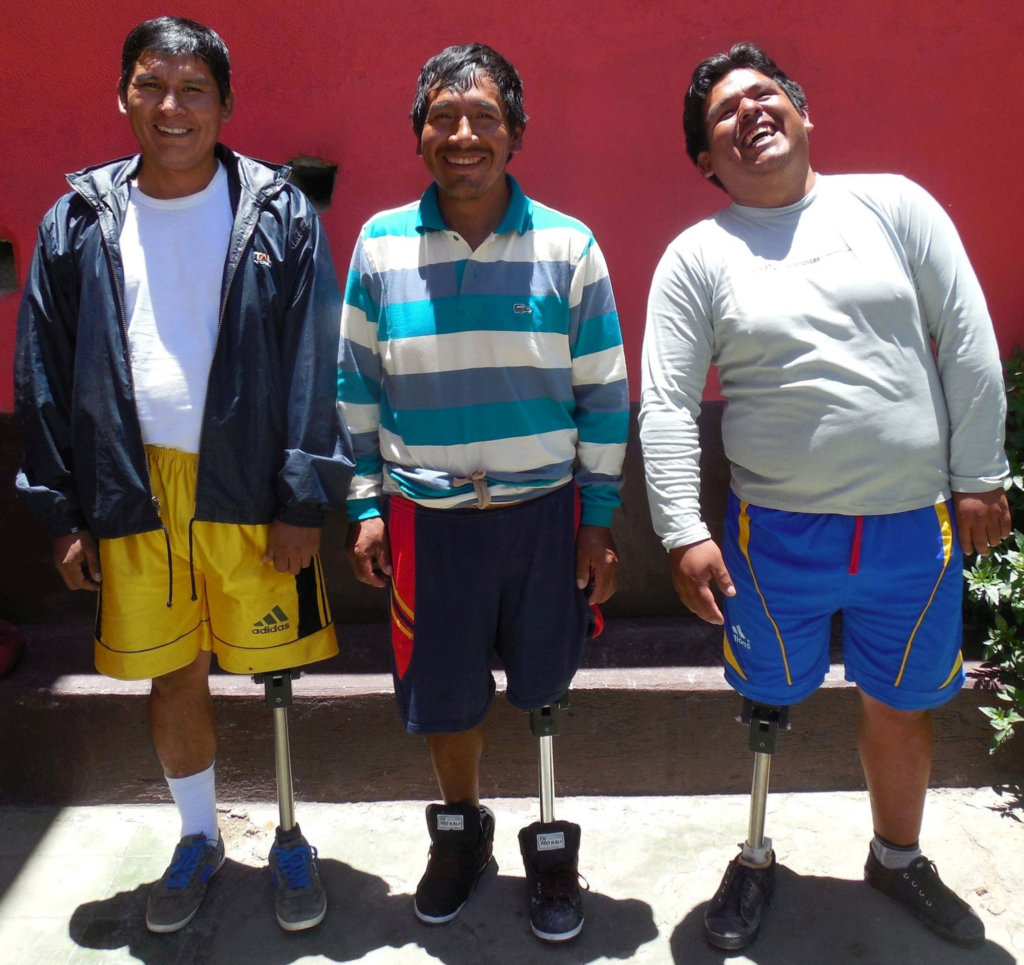 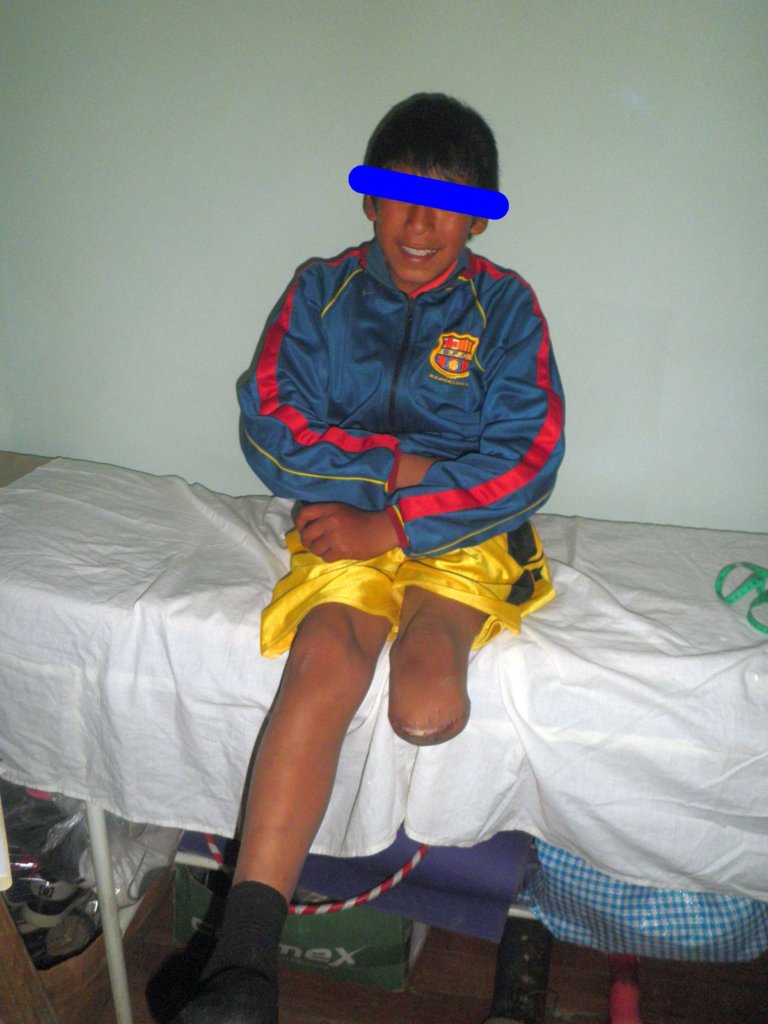 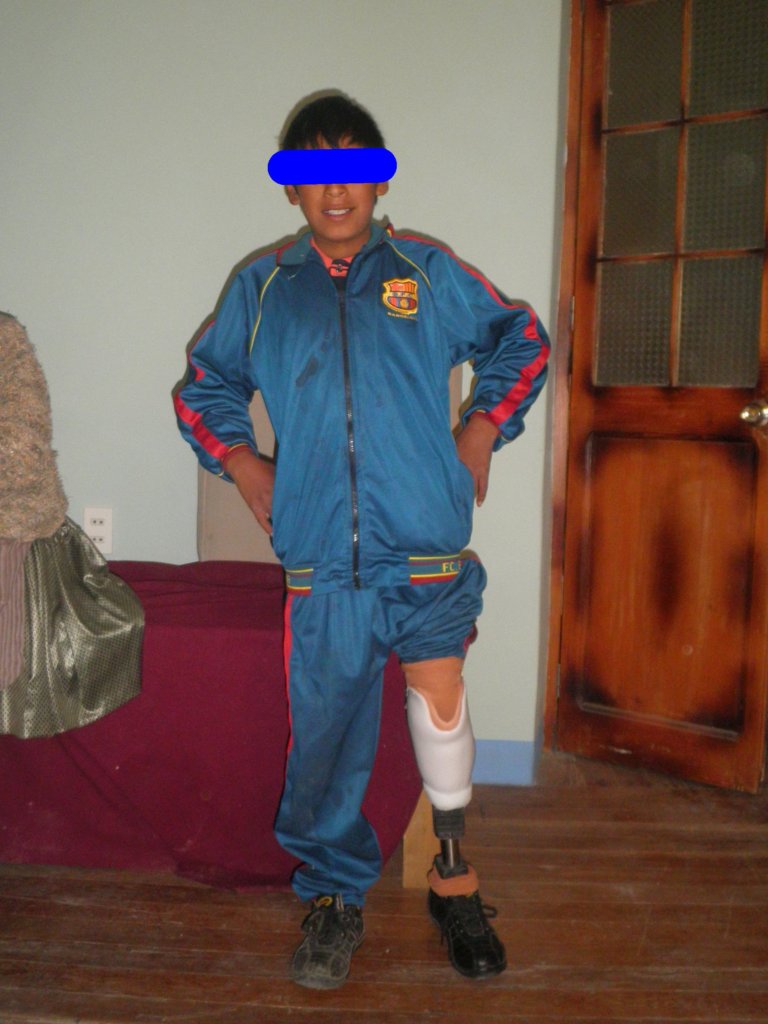 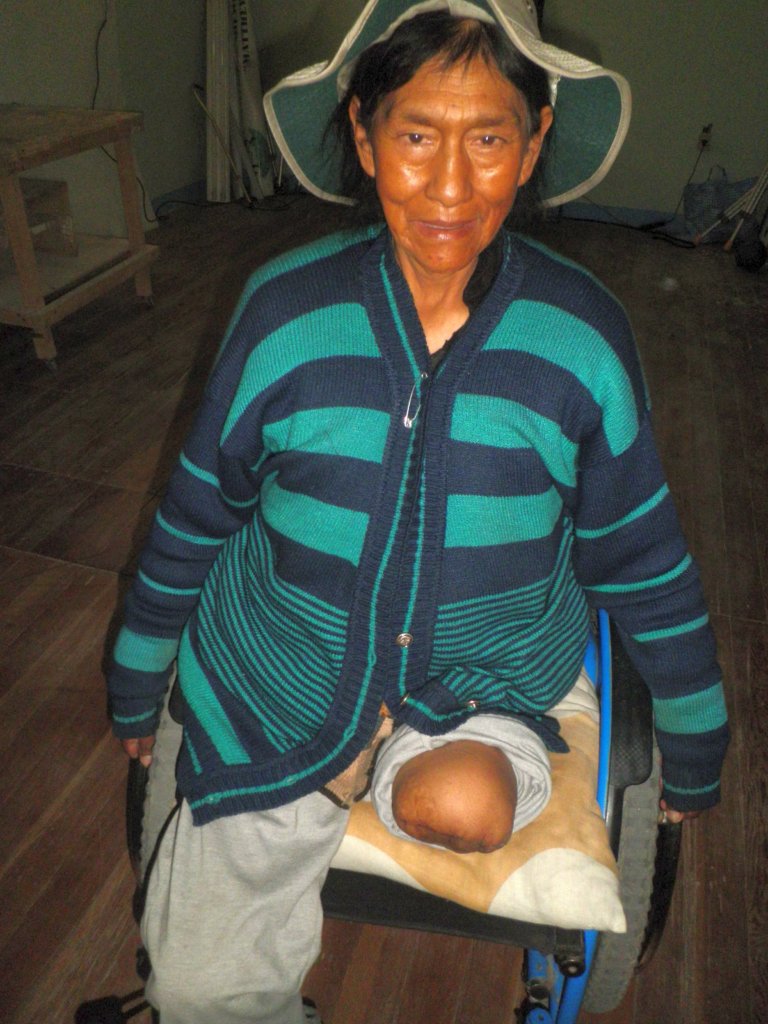 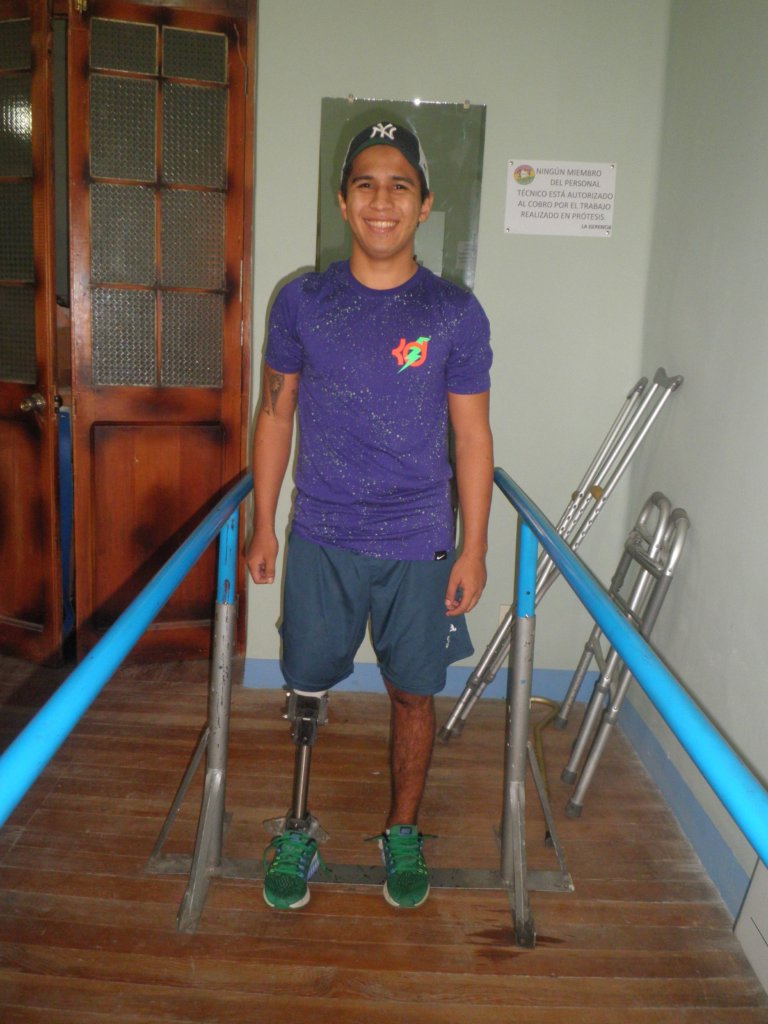 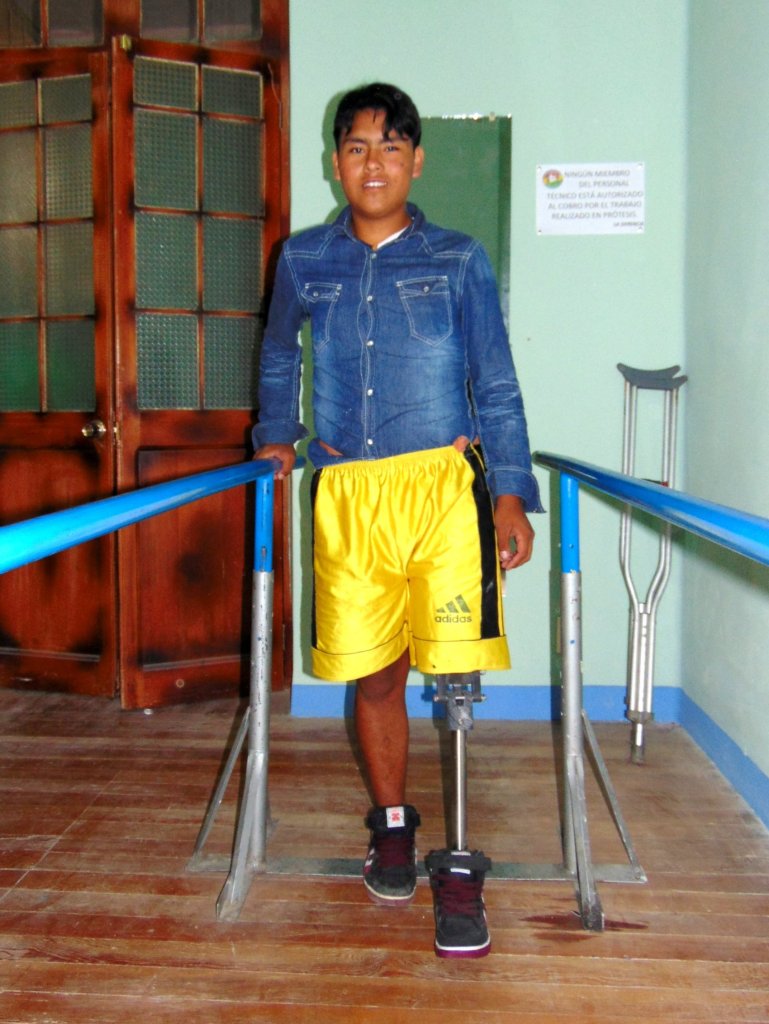 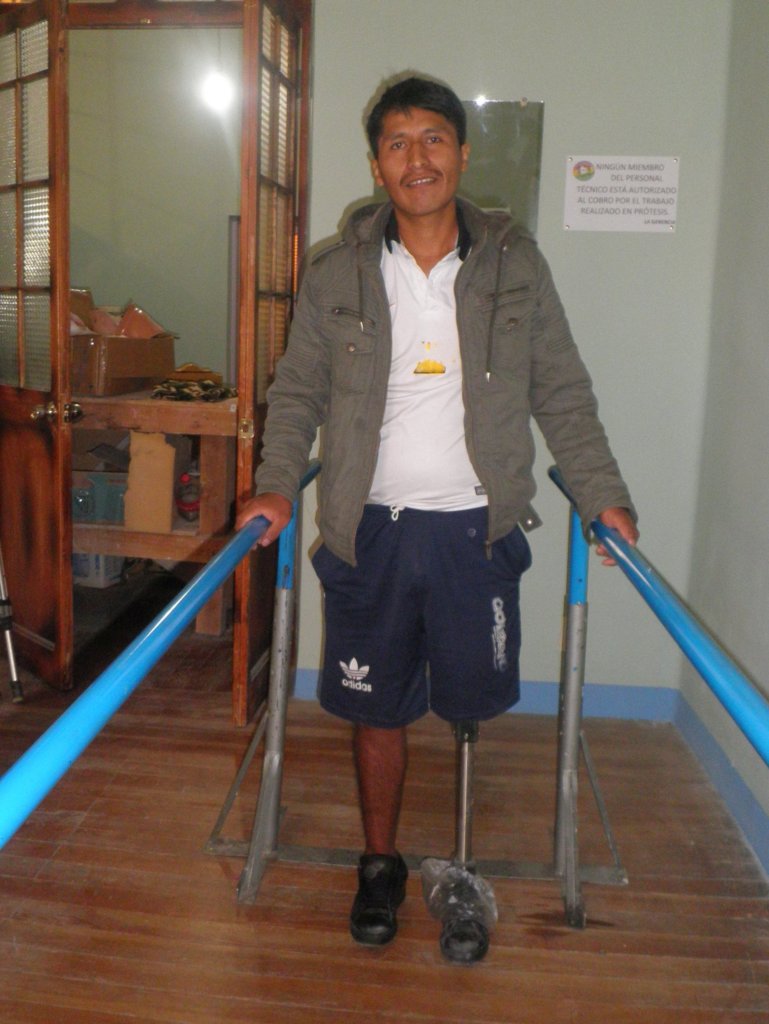 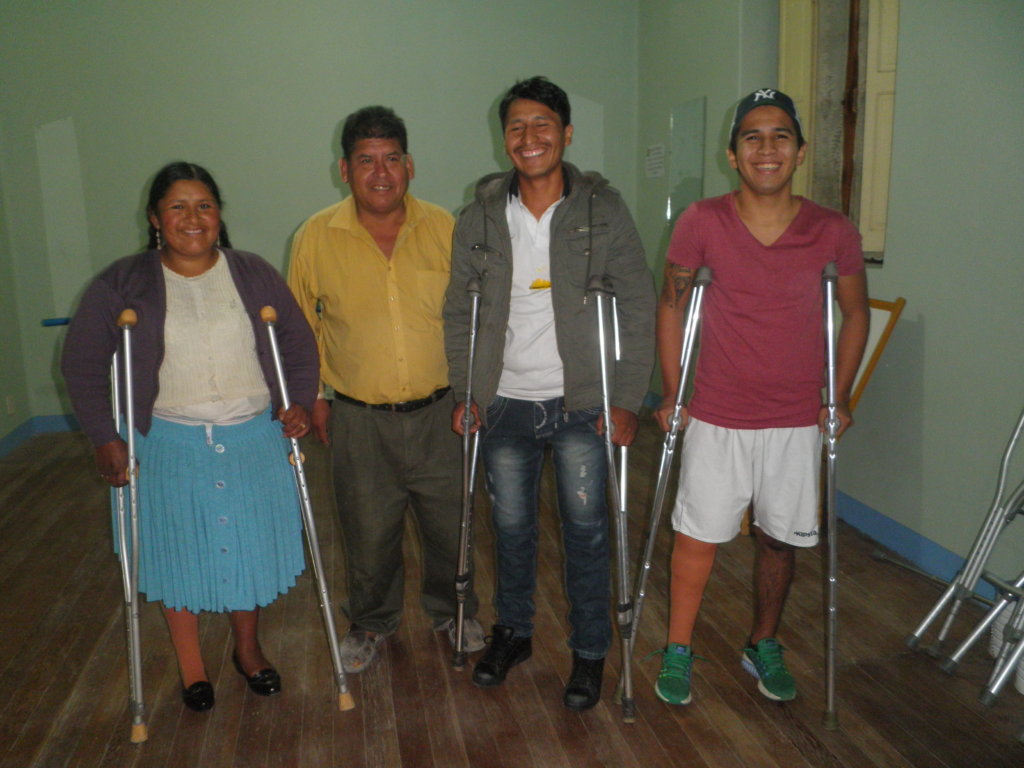 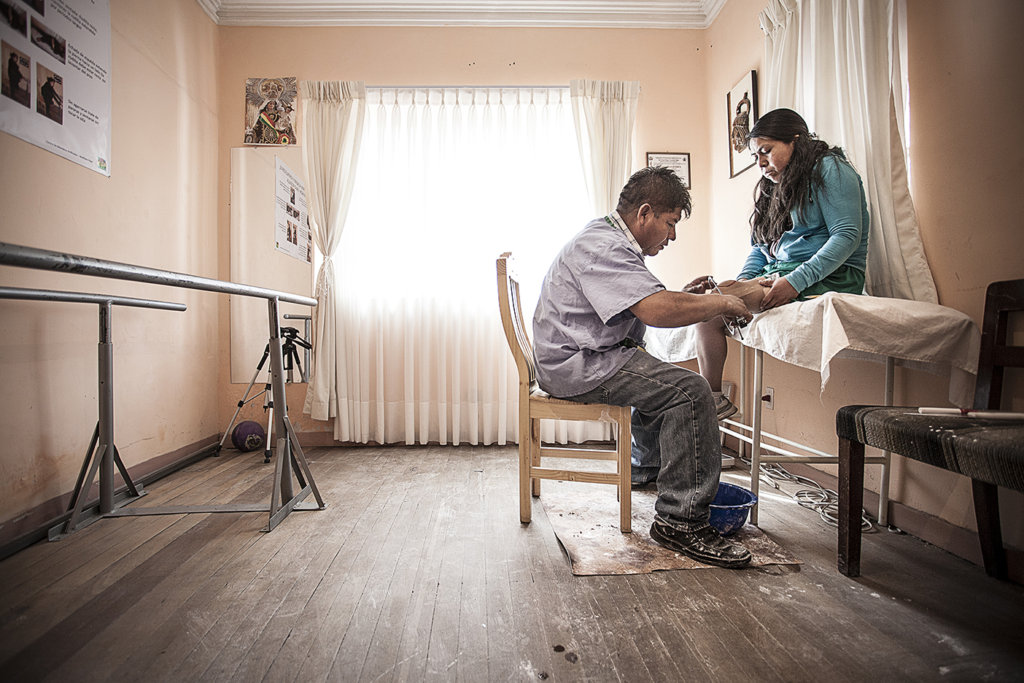 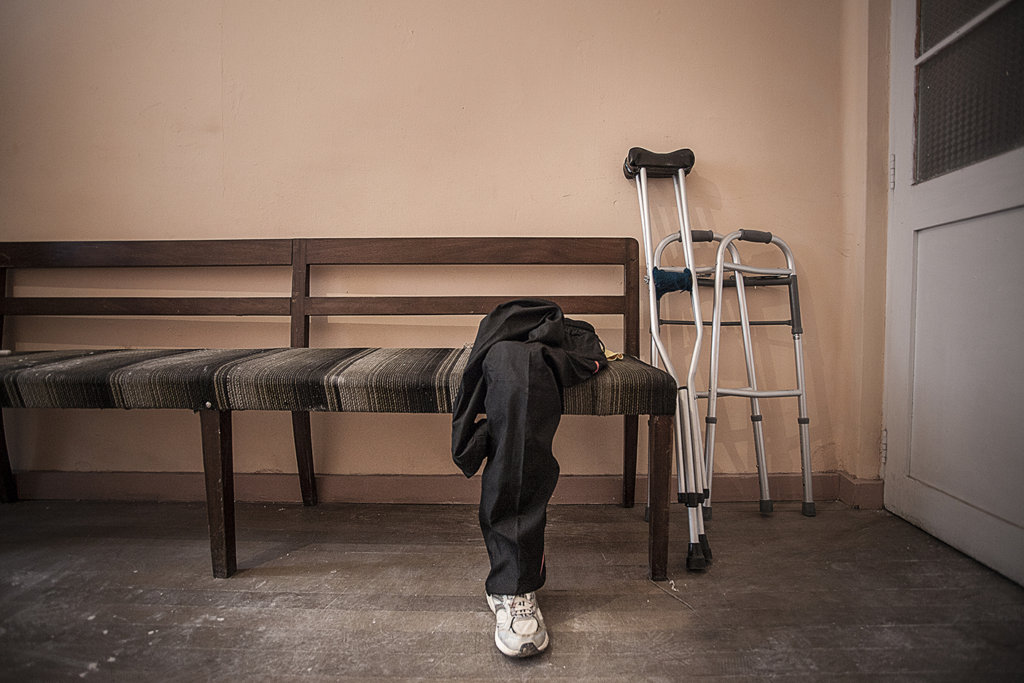 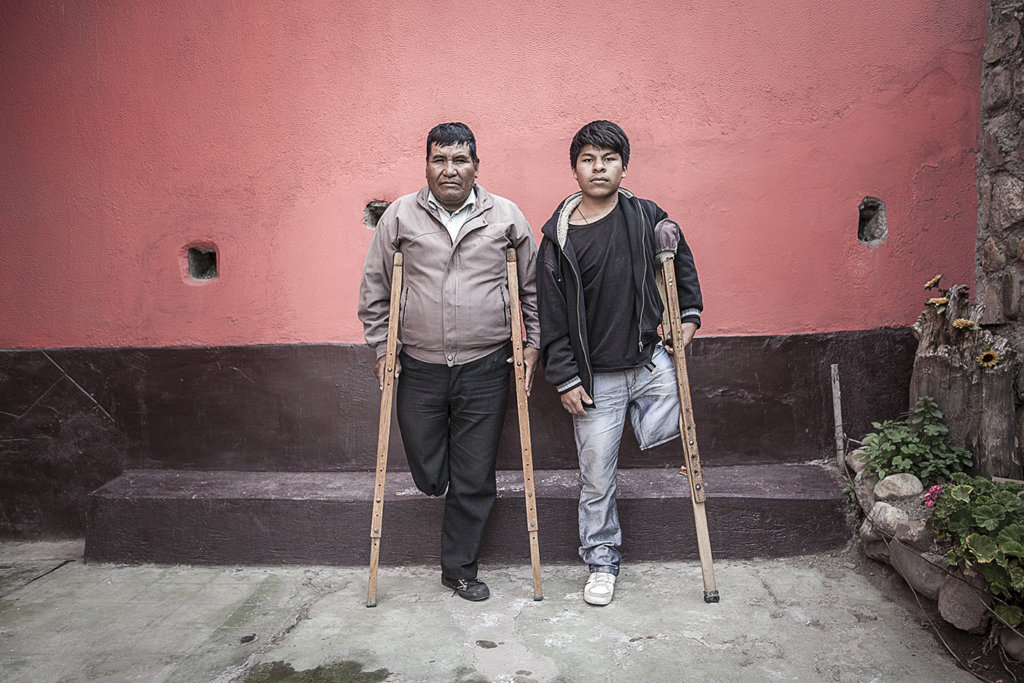 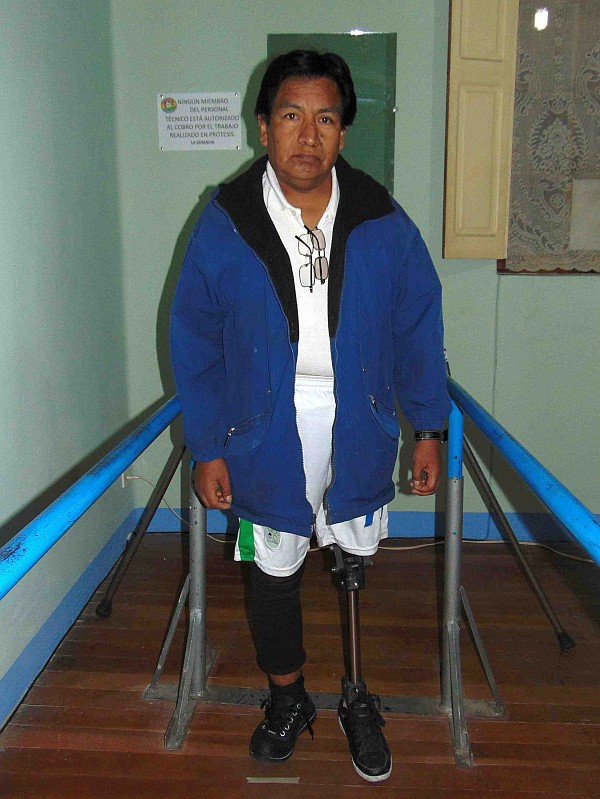 Our monthly “patient-in-focus” story is about a recent low-income amputee. Justo is now walking again due to the work of our Bolivian partner, and another grant from Bolivians Without disAbilities. Many patients are like Justo – going about their daily lives until tragedy strikes. Here is Justo’s story:

The Accident Happened
“I used to work as a window glazier in a small glass company. I am a very careful worker, but one day I slashed my left foot on a fragment of glass. Unfortunately, I feared that if I left work to visit a doctor that I would risk losing my job. It was possible that someone else who could work the whole day would take it. So I hastily bandaged my foot and continued with my work. But over the course of the next year, the wound did not heal despite my best efforts to clean it and re-dress the bandage regularly.

They Took My Leg
A friend of mine who is a doctor took a look at my foot. He shook his head and explained how badly infected my entire leg was with gangrene. He urged me to go to the hospital because he was convinced that I should get my leg amputated. When I heard this I became severely depressed. Here in Bolivia losing a leg is almost always a sure way to lose your livelihood. I wanted to die rather than lose my leg and my only means to support my wife and children. My family had to convince me to have the surgery.

We didn’t have the money to pay the medical bills from the larger, safer hospitals in the capital so I first went to a cheaper local hospital. After 3 days in this hospital, having not been seen by any doctors and with many of the other patients around me dying, my condition continued to worsen. My wife took me to another hospital and proclaimed, “I don’t care how much it costs, please just save my husband.” In this second hospital, I was seen by doctors who confirmed that I needed an amputation of my left leg since the gangrene was very advanced.

I had to undergo a series of three operations. The first was below the knee. After the surgery it was determined that not all of the infection had been cut off. So I needed a second surgery. And then a third before the doctors were fully satisfied that the infection had been removed. Each time they had cut higher and higher. By the end they had removed my leg to a point above my knee. I thought about killing myself, but I knew that I couldn’t leave my wife and son alone, and so I continued on.

My Life Savings Were Exhausted
After I got out of the hospital everything changed for me and my family. For the first month after my operation, while I was still recovering in hospital, my family and friends would visit me frequently. Friends initially brought gifts of food, however, after a month, this support dwindled and my family and I found ourselves alone. Since I was unable to provide an income to support us our money quickly ran out.

When I was finally healed enough I found another job as a window glazier, but I was unable to undertake the work alone. My wife and young son had to accompany me to work every day. They had to do much of the heavy lifting and ensure that I didn’t fall over or have any other accidents at work. Even though the company was only paying for one person, they didn’t like this arrangement and I was let go again.

I Am Hopeful For My Future
Now that I have received a new prosthetic limb and I can walk again, I plan to find a new job. My young son to return to school. I will pay off my remaining medical bills, and I will support my family again. I am very hopeful for my future.

Support another project run by Bolivians Without Disabilities that needs your help, such as: 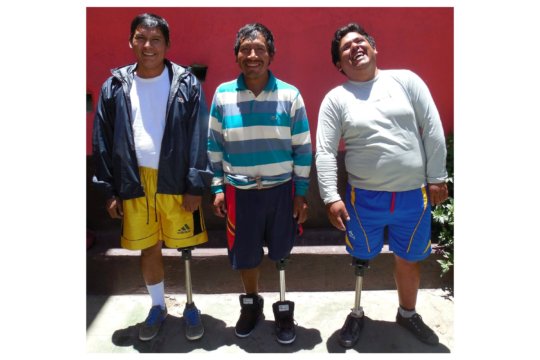 GlobalGiving
Guarantee
Donate https://www.globalgiving.org/dy/cart/view/gg.html?cmd=addItem&projid=26656&rf=microdata&frequency=ONCE&amount=25
Please Note
WARNING: Javascript is currently disabled or is not available in your browser. GlobalGiving makes extensive use of Javascript and will not function properly with Javascript disabled. Please enable Javascript and refresh this page.