Orphans into foster families in Vietnam 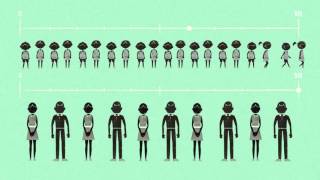 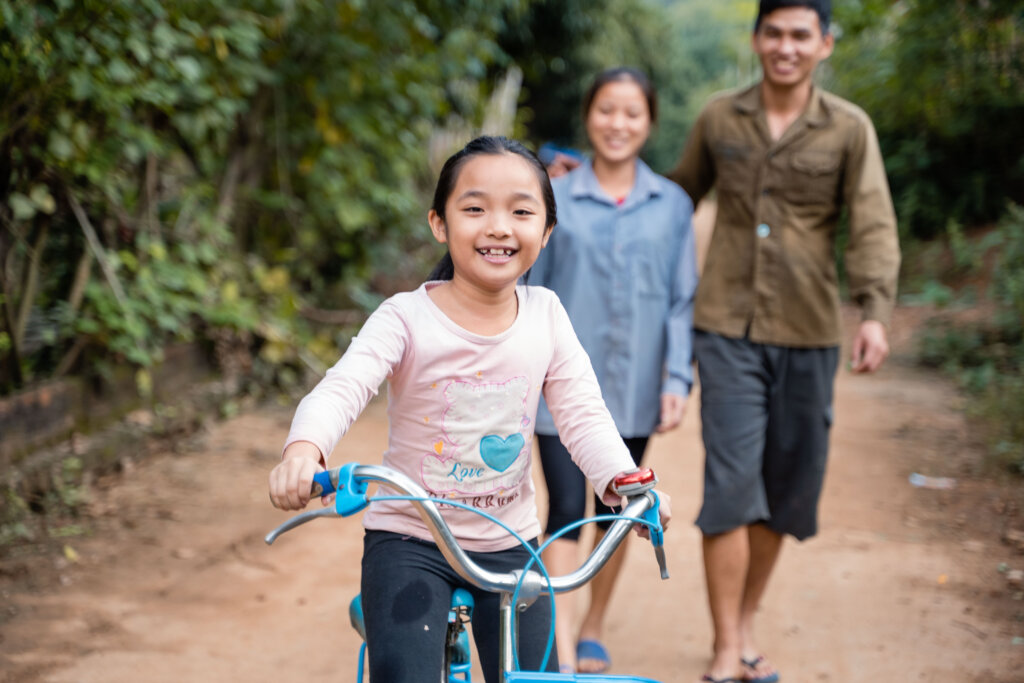 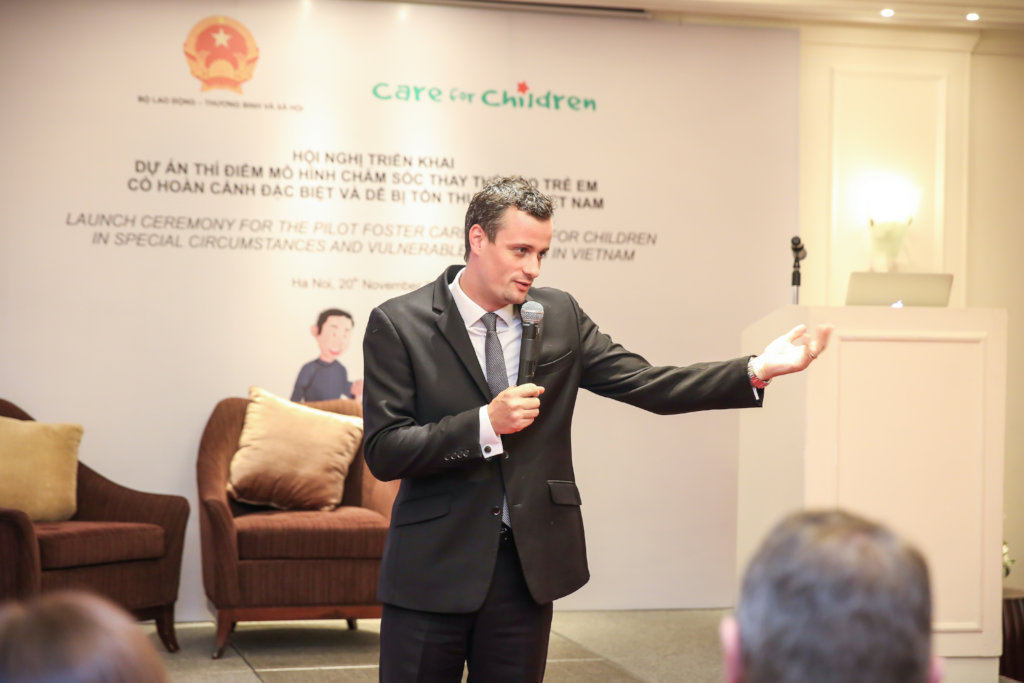 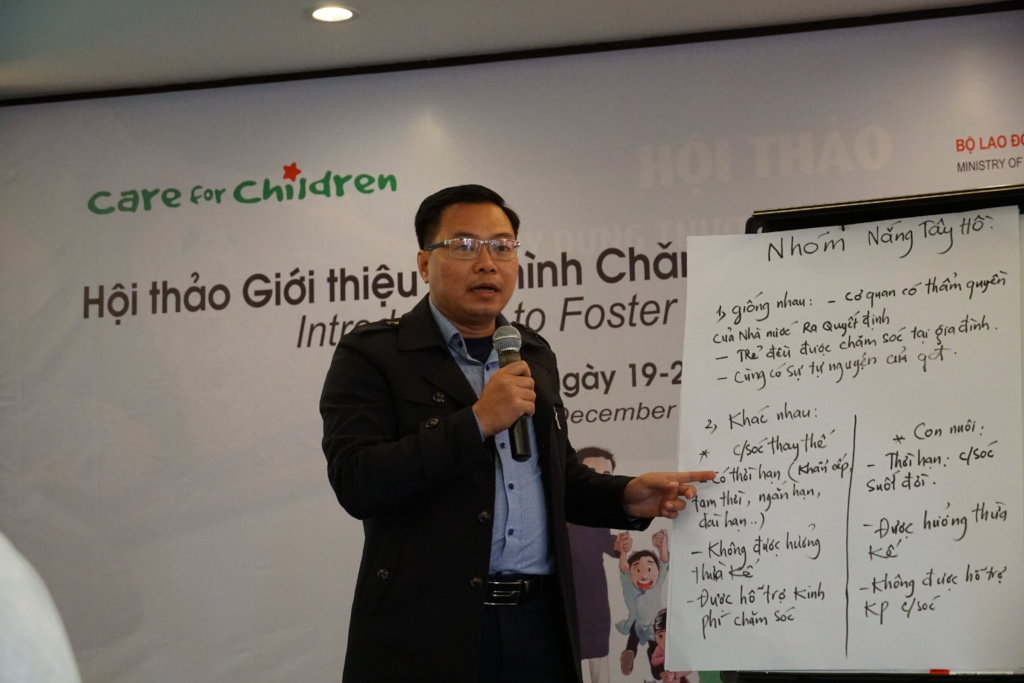 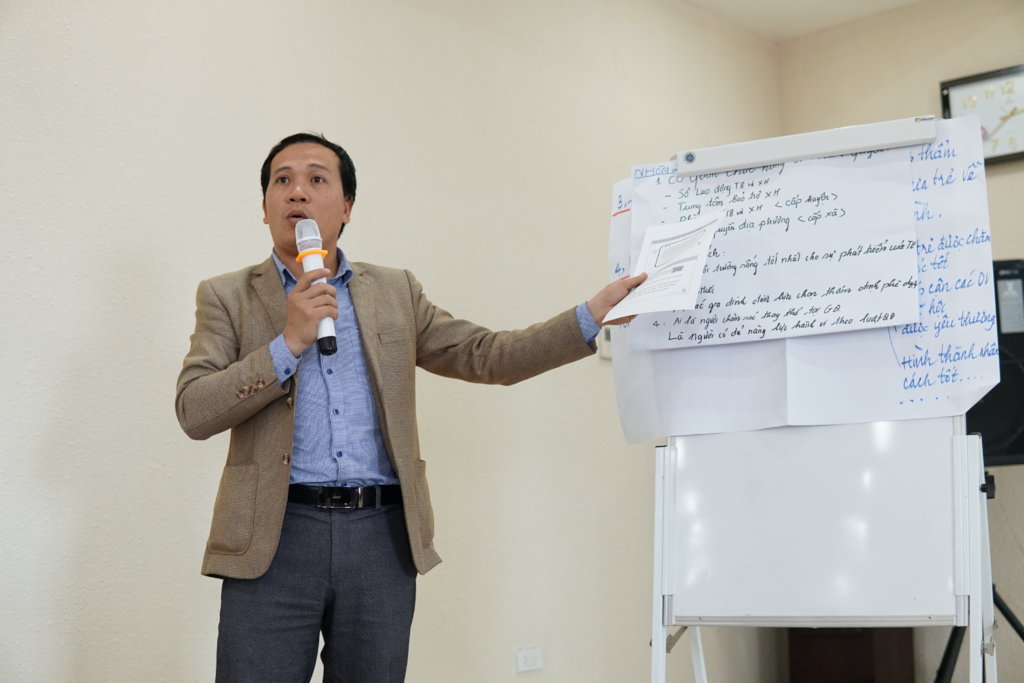 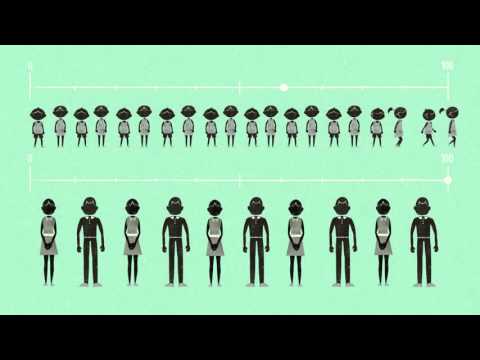 "I've learnt what children need for their mental health." 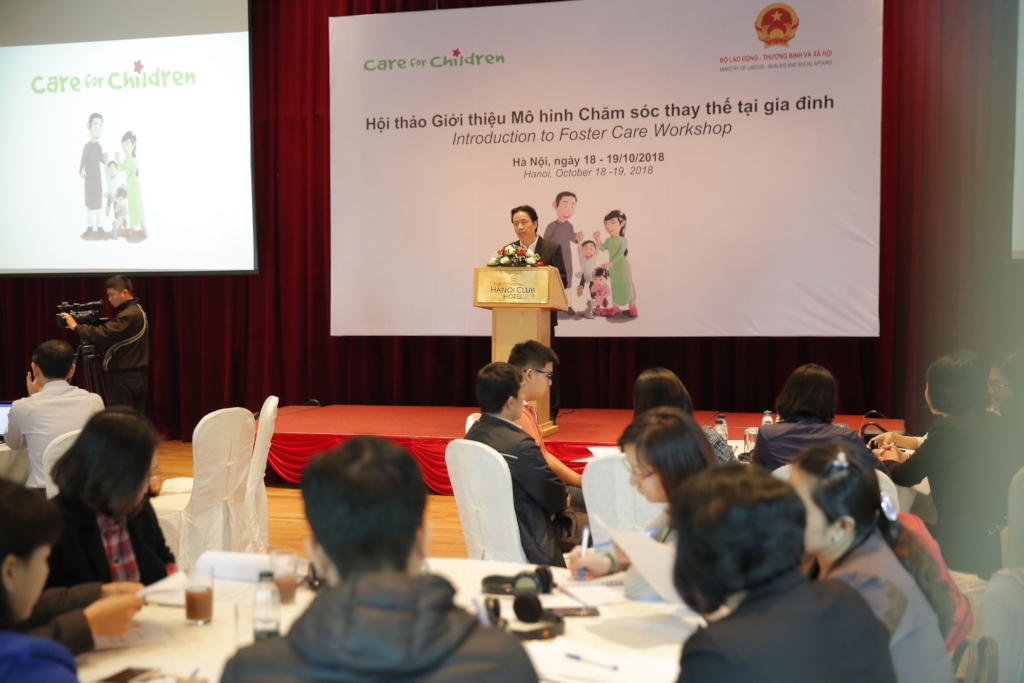 The workshop in full swing

In October the team held its first official training workshop in partnership with the Vietnamese government.

Care for Children is in the early stages of introducing foster care to the child welfare system in Vietnam. This is the first official workshop in a series of workshops that will build the capacity of government stakeholders and Social Protection Centres (orphanages) across Vietnam in local family placement/foster care.

The ‘Introduction to Foster Care’ workshop was held over 1 ½ days, with directors from both project sites and high level management from the local government in attendance. In total 40 people attended.

Our government partner delivered the first part of the workshop, explaining the new childcare law and the law on foster care. Care for Children’s training manager then led the ‘Introduction to Foster Care’ training. With the aim of raising awareness about foster care and its benefits, the training was delivered in an interactive and participatory way, engaging the participants through case studies, small group discussions and brainstorms.

In order to determine the effectiveness of the training and the degree of knowledge change, questionnaires were distributed to participants before and after the workshop. The participants’ average scores for their knowledge of foster care increased from 3.0 to 4.2 (1 = low; 5 = high). This proved the training was successful and well received by the audience. The following are some testimonies from the participants.

“The training is very interactive, informative and useful.”

“The trainer was very knowledgeable. I was very touched and impressed with the case stories shared by the trainer.”

“I've learnt what children need for their mental health. After we go back home, we will try our best to provide individualized care to our children to meet their emotional needs.” 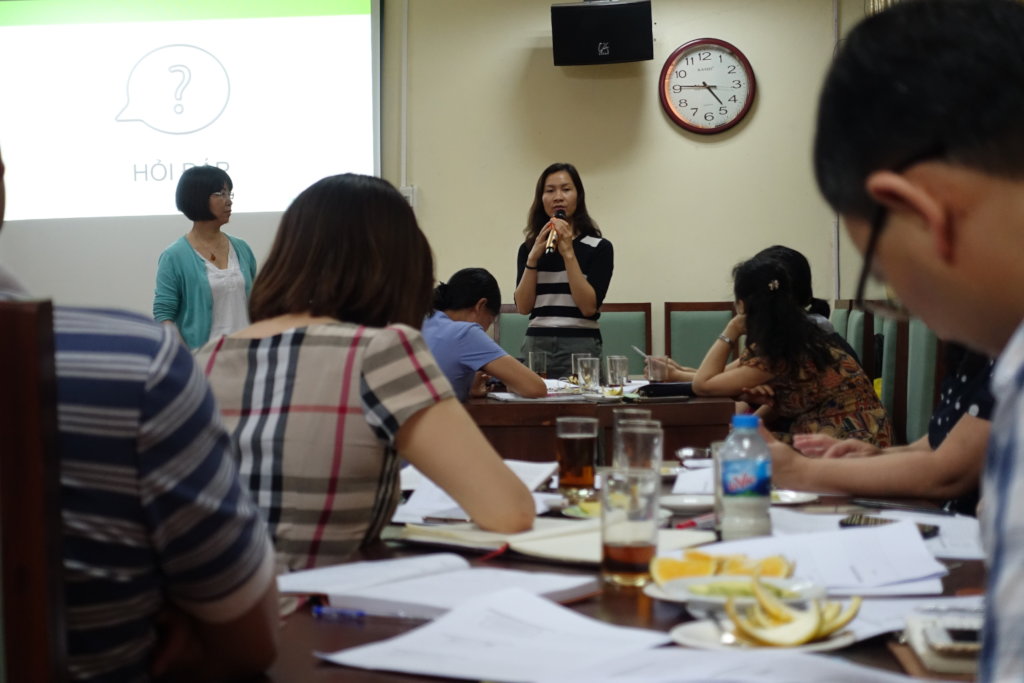 At the end of May, the team delivered its first official workshop - a milestone event for this project. The workshop, which was intended to be a trial, was entitled ‘Introduction to Foster Care’ and was the first activity on the 2018 Training Plan. The Deputy Director General, Madame Hoa, and other key staff from our government partner attended, as well as the whole Care the Children team. Although not without a few (mainly technical) hitches, the workshop was a great learning opportunity, giving the team plenty to think about before delivering the first workshops to the two pilot Social Protection Centres (orphanages).

In June, the project team visited one of the two pilot project sites in Hanoi.  The meeting was designed to help us gather more information on childcare in the area and within the orphanage and to help the staff from the Social Protection Centre understand more about the background to foster care.

The first training module (Introduction to Foster Care) has been developed and is scheduled to take place in September. We will be running three workshops; one at the national level and then two at the provincial level.  This will ensure that the key stakeholders will be familiar with the concept of foster care and why it is a positive alternative to institutional care. Once complete we will then deliver all the initial core training in the following months this year.

One of our early objectives was to become registered as an NGO in Vietnam. We have just received the fantastic news that we have been approved! This has taken just over four months and, from speaking to other NGOs in the area, has been extremely quick.

We look forward to the upcoming months, working with our government partners in the training workshops as we continue the work to see the development of foster care for children as a positive alternative to institutional care.

"Don't worry, you can bring all the children to us, we'll look after them!" 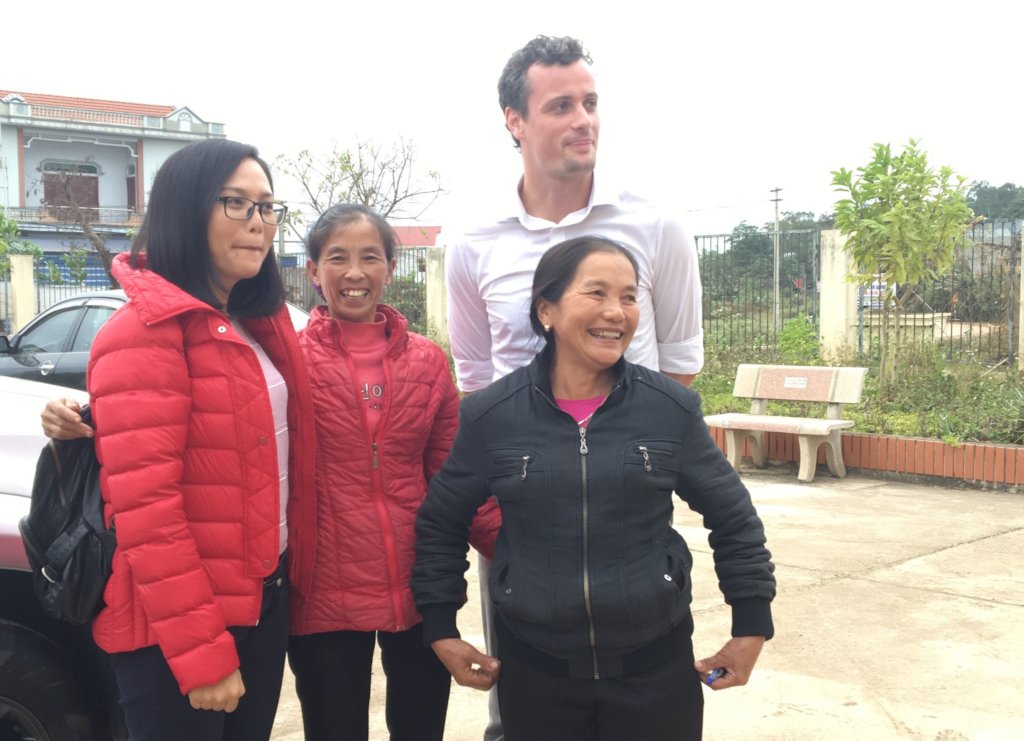 One of our favourite project stories from the last few months was during a visit to our pilot project site in Thai Nguyen province (just under two hours’ drive from Hanoi).

We spent the morning meeting with provincial city government officials, most of whom we had met before, and discussed some technical details of the project, training strategies and other project plans. We also distributed a questionnaire to capture their understanding of their training needs (a critical part of the process to help tailor our training programme for the Vietnamese cultural and political context, as well as measure knowledge and attitude change over time).

After lunch we then headed out into a ‘commune’ of Thai Nguyen where we met with about 20 community leaders (all women). These upstanding citizens, earning just US$5 a month, play an important role in the health of their communities by championing the government’s social initiatives by scooting around neighbourhoods on their mopeds to make home visits, help administer social support, and meet regularly to feedback on local developments.

We enjoyed an extremely informal atmosphere as we shared about the project plans and listened to their thoughts and ideas, much of which was accompanied with anecdotes and jokes! As we walked out of the building where we met, one of the ladies in the group turned to Thomas and said enthusiastically and convincingly:

“Don’t worry, you can bring all the children to us, we’ll look after them!”

It was a touching moment, so we insisted on having a photograph taken with her (second from the left)!

Much of our work at the beginning of this project has been focussed on high-level government meetings, developing and approving work plans, and conducting research, which is all very necessary to establish the best possible foundations onto which the project can be built. But it was very encouraging and inspiring when, at the grassroots level, we were reassured by some of the people who will be on the frontline of the work that we had their full support. With all the strategic planning in the world, if the heart and compassion was missing at this level, the project would never get off the ground!

Once again, thank you for your support and staying connected to our work!

Ending the year on a high! 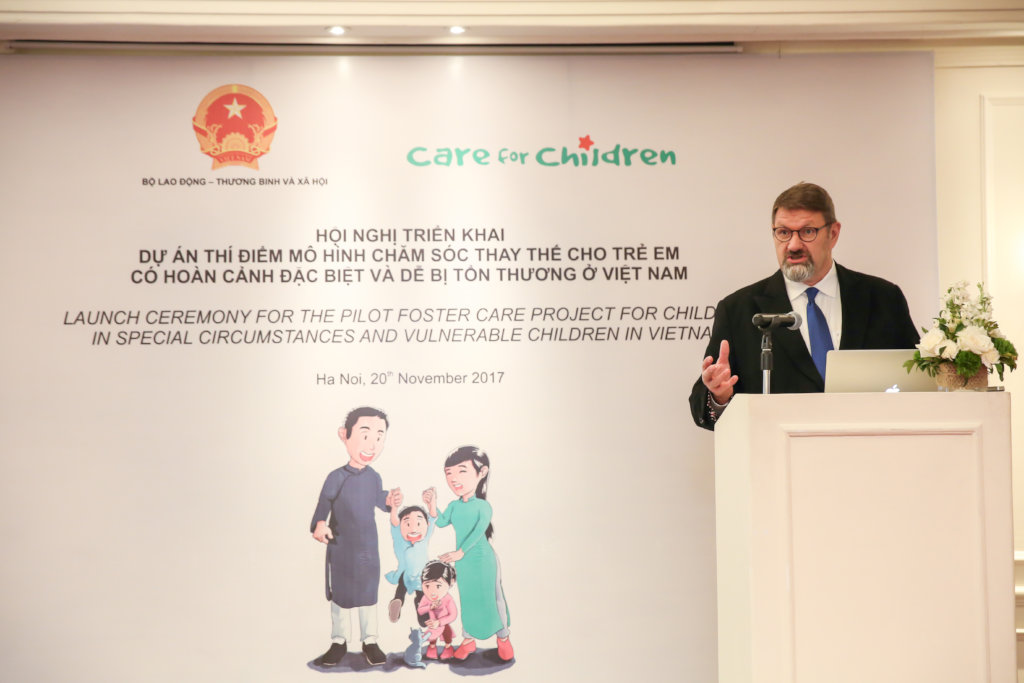 Care for Children's founder at the launch ceremony

We’re pleased to report that we ended the year on a very positive note. In December, in preparation for starting training at the two Social Protection Centres (orphanages), which we’re partnering with, the team conducted a training assessment at both project sites as well as the communes in Thai Nguyen and Hanoi. The aim of this assessment was to ascertain their current level of knowledge of foster care so that the team can tailor the training programme accordingly.

We hope that by our next update we will have started training staff from the two pilot sites. In April 2018, the team hopes to begin the training programme with the two Social Protection Centres, communes and government staff, which will initially focus on the “What is Foster Care?” training workshop. There will be 3-5 workshops delivered during the month. This is extremely exciting and will be worth the months of hardwork that the team has put in to establish the project.

One of the key challenges that the team has experienced has been to understand the government’s calendar and trying to work within their schedule. Although this can be frustrating, the government has also been flexible when it has come to major decisions with the project. This is pioneering work in which Care for Children and the Vietnamese government are treading new ground. So, we have to be willing to take it step by step, working side by side with the government at a similar pace, remaining flexible and focused to continue the project and to make sure it has an impact. 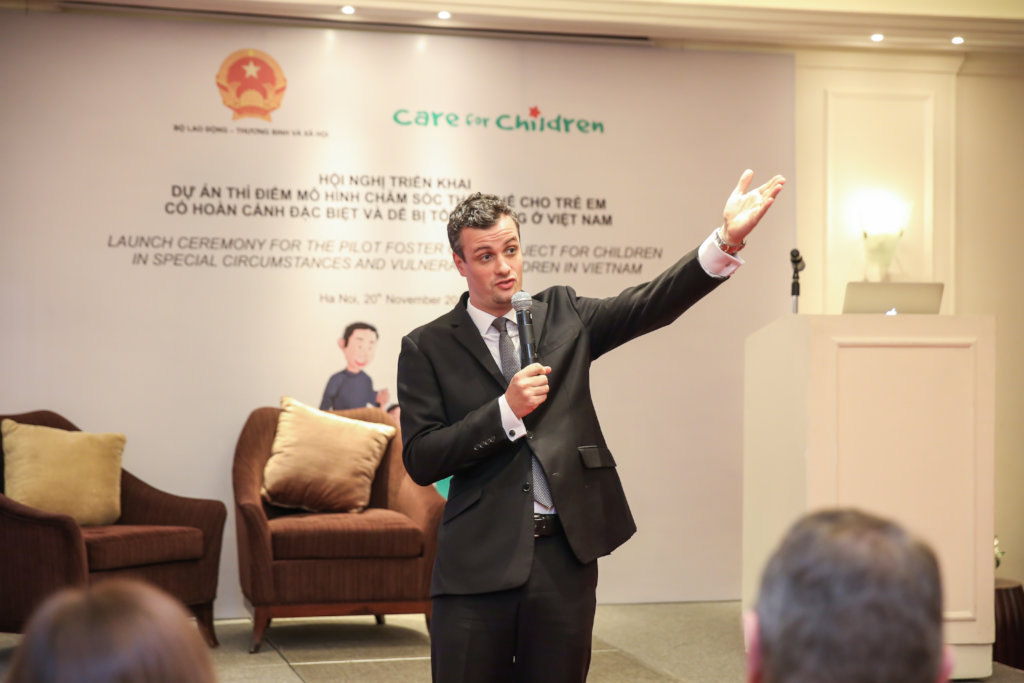 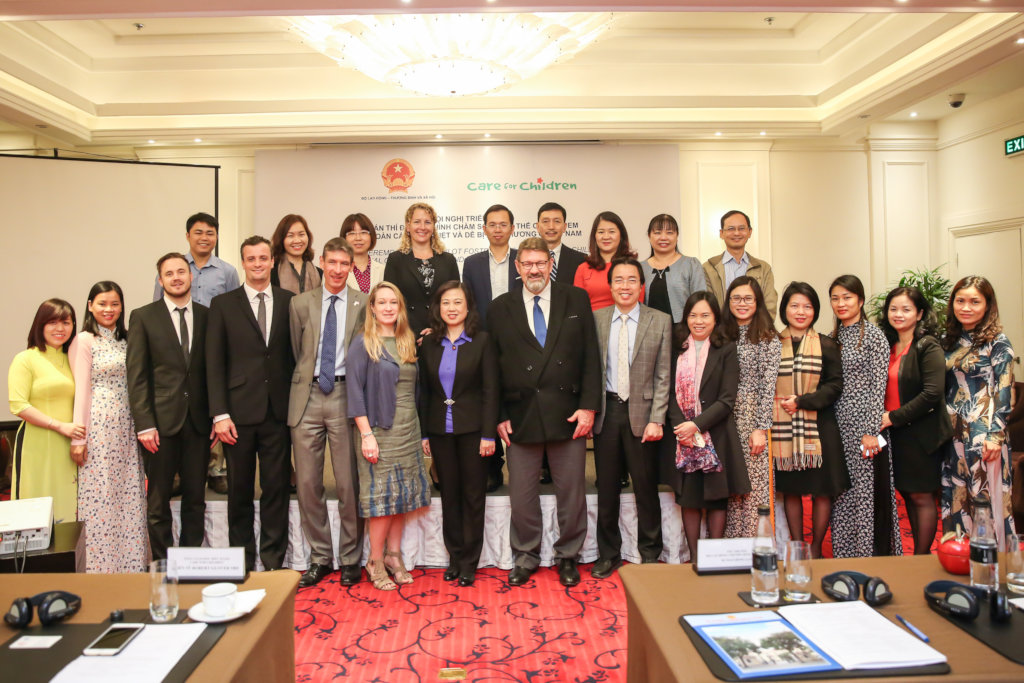 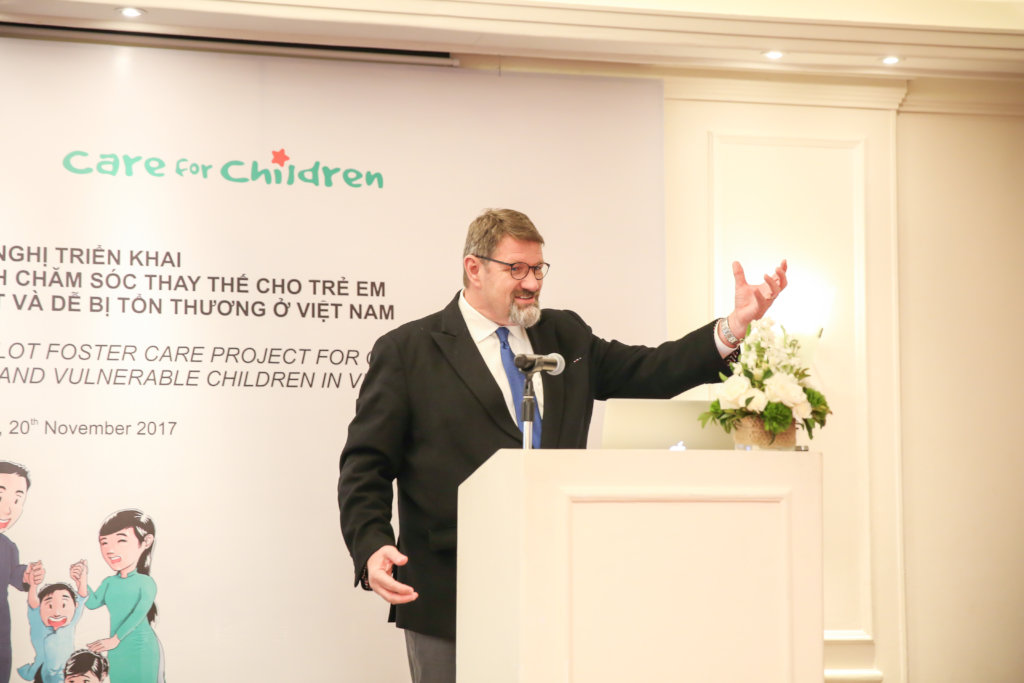 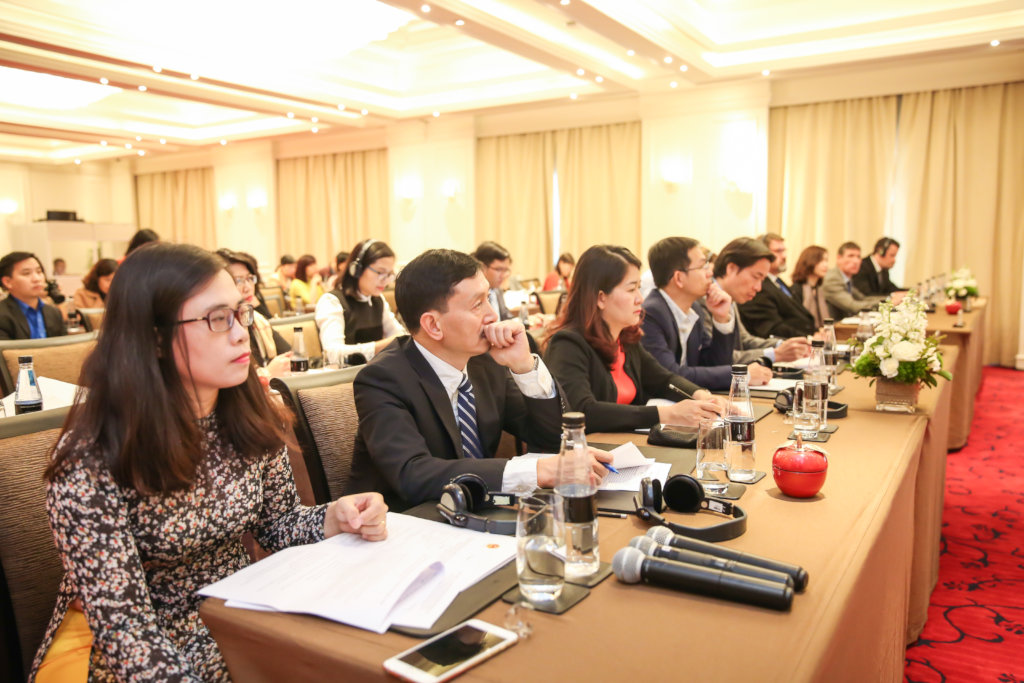 The ceremony in full swing

GlobalGiving
Guarantee
Donate https://www.globalgiving.org/dy/cart/view/gg.html?cmd=addItem&projid=25370&rf=microdata&frequency=ONCE&amount=25
Please Note
WARNING: Javascript is currently disabled or is not available in your browser. GlobalGiving makes extensive use of Javascript and will not function properly with Javascript disabled. Please enable Javascript and refresh this page.