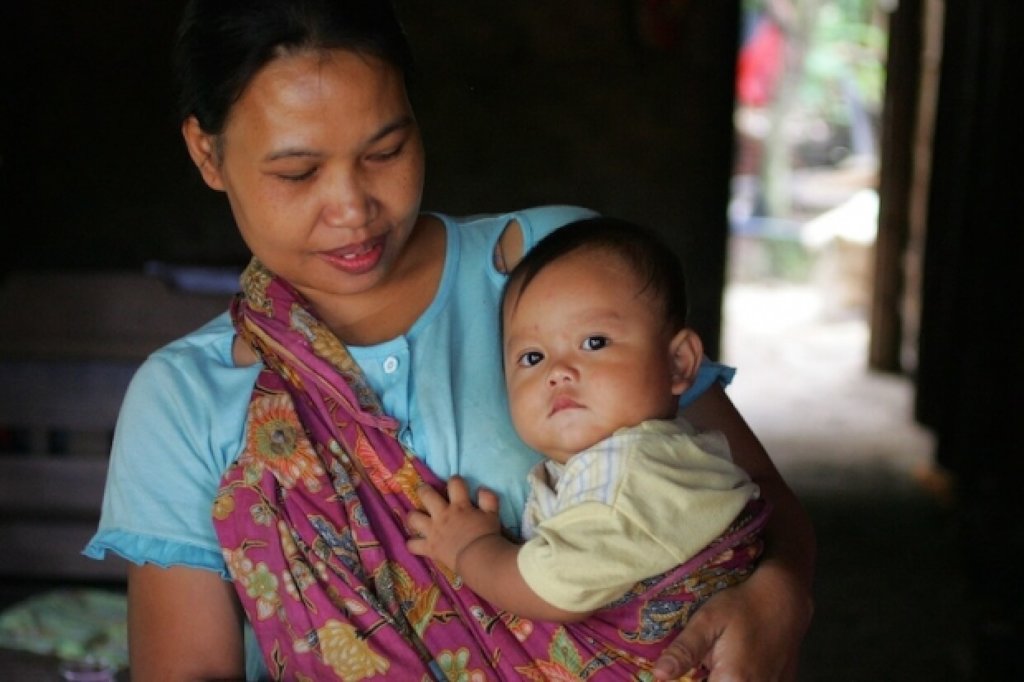 On the night of December 22, 2018, Mrs. Murnasih got a phone call from the head of the neighborhood telling her that “water is coming.” She told her husband right away; her husband went out to check. He was shocked to see that water was already coming in and was rapidly getting higher and higher. The couple grabbed their young children, 7 and 3 years old, and began running towards higher ground, joined by throngs of people streaming from other nearby villages. Without power or cell service post-tsunami, it was hard to get news on what was actually happening.

Since they had to leave in a rush, like so many others that night, Mrs. Murnasih and her family could not bring anything with them. However, she was relieved that at least her entire family had survived. They spent the night in the open, very scared and wondering what had happened to their home and belongings.

In the early morning hours, two tsunami waves struck the shorelines of Java Island and Sumatra Island that form the boundaries of the Sunda Strait. During the first 48 hours after the event, there was little clarity on what had happened to cause the wave. As satellite data became available, it was concluded that the on-going eruption of Anak Krakatau volcano (since July 2018) in the Sunda Strait had caused either an underwater landslide or a partial collapse of newly forming areas of the volcano.

More than 430 people died, and an additional 14,000 were injured. As a result of the destruction caused by the tsunami, there were more than 33,000 internally displaced people and thousands of damaged homes.

Mercy Corps’ experienced response team in Indonesia responded immediately, sending staff to assess the area and begin emergency relief distributions. Per our typical approach, we worked in consultation with the government and peer agencies, regularly meeting to review the ongoing situation, identify needs and coordinate activities. We coordinated closely with the Indonesia Red Cross and carried out joint distributions in heavily impacted areas – totaling 365 relief kits delivered in January and 144 kits in February.

The Indonesia Red Cross took the lead in registering recipients and documentation, while Mercy Corps provided the kits and implemented the actual distribution. We distributed three types of kits: shelter kits, which contain tarps, rope, blankets, boots and gloves; hygiene kits, which contain a bucket, jerry can, toothbrush, clothing, and bathing items; and cooking kits, which contain a wok, a pan, cooking utensils and cutlery. The kits included items we knew were in high demand and culturally appropriate for affected members of the local community. We worked with the Indonesia Red Cross to select recipients, with the primary criteria being that the recipient’s home had been totally or almost totally destroyed, as well as fisherman who had lost their boats.

Our readiness to respond to disasters like these and help strengthen communities for the long term is thanks to the generosity of supporters like you. To support our work now and for the future, please consider making a gift to Mercy Corps.

Find another project in Indonesia or in Disaster Response that needs your help.
Find a Project

GlobalGiving
Guarantee
Donate https://www.globalgiving.org/dy/cart/view/gg.html?cmd=addItem&projid=37894&rf=microdata&frequency=ONCE&amount=25
Please Note
WARNING: Javascript is currently disabled or is not available in your browser. GlobalGiving makes extensive use of Javascript and will not function properly with Javascript disabled. Please enable Javascript and refresh this page.