Keeping girls out of the sex trade (and in school) 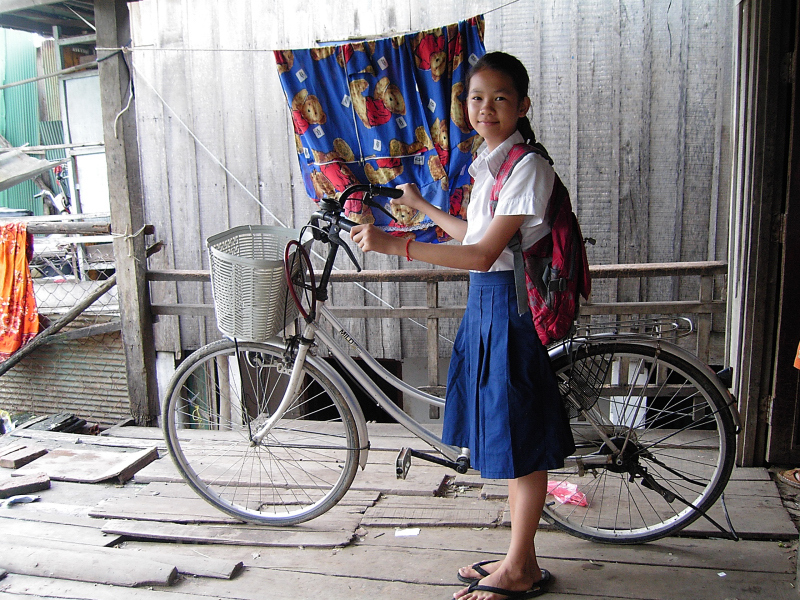 How Lotus Pedals is keeping girls out of the sex trade (and in school!)

As a result of your generous support, we were recently able to provide new bicycles to 13 bright young girls living in Phnom Penh’s red light districts so they can get to school!

Living in brothel-based communities, the daughters of illiterate sex workers are at a high-risk of following in the footsteps of their mothers—often by the age of 14 years old.  In partnership with the local Non-Governmental Organization (NGO) Khemara, Lotus Outreach has been providing Non-Formal Education (NFE) and Skills Training to urban sex workers for nearly five years, helping hundreds of women and girls find better opportunities while escaping the lethal pitfalls of Cambodia’s notorious sex industry.

While adult sex workers learn basic literacy, mathematics and vocational skills, their children attend daily classes alongside them to prepare for enrollment in public school at an age-appropriate level.

The daughter of a former sex worker, 13 year-old Moeung Srey Pov is an example of how female empowerment reverberates through generations. She moved to Phnom Penh with her mother, Seng Ly, at the age of eight, where she helped raise three younger siblings and sold coffee to supplement her mother’s income. With Srey Pov’s help, her mother successfully completed the NFE program and is now a full-time staff member of Khemara.

When Seng Ly realized that NFE would provide caretakers for her youngest children, she opted to send Srey Pov to the NFE classes which were held a short, safe walk from their home. At that point, Srey Pov had only reached the second grade, and could hardly read or write. Yet over the course of the year, she proved to be a sharp student and was often at the head of her classes. In October of 2009, the program staff enrolled her in sixth grade at a local primary school.

Srey Pov was elated to go to public school like other children her age. “I felt very happy, and at the same time I was in awe of my teacher since she was so kind to me. She didn’t take a tuition fee from me and told the class not to be mean with me because I am an ‘NGO kid’ - which means I am poor.”

Despite her enthusiasm and progress, five months later Srey Pov lost her transportation to school. Her neighbors had been giving her a ride on their bike, and when they dropped out she was forced to do the same. For a little while she took a taxi, but at $1 a day it became too much for her family to sacrifice.

This October, NFE once again got Srey Pov back in school, a little closer to home.  Since a neighbor also attended Toul Kok Primary, for her first days Srey Pov shared a taxi with her for $0.37 each a day. Yet this left her vulnerable to the fate of her friend, and although reduced, the expense of transportation remained a burden on her family. To make sure little Srey Pov could complete the year, we recently provided her with a Lotus Pedals bicycle.

“I feel very happy because I won’t have to spend money on a motor taxi anymore,” boasts Srey Pov. “Even if my neighbors drop out again, I won’t because now I can ride my bike to school every day.” She plans to give her friend a ride on her bike, so the girl doesn’t have to pay for the taxi alone. When we ask if the two girls will take turns riding the bike, Srey Pov looks mischievously at her friend and jests, “she doesn’t know how to ride a bike, so I will ride her. But she has to pay for parking!”

Armed with her own means to get to any school within several kilometers, Srey Pov plans to at least graduate high school.  At that point, she’ll see if she can afford to continue to college. As far as her career plans, the specifics are still fuzzy, but Srey Pov is aiming high: “I want to do something that people value and admire.”

Srey Pov’s story serves as a stark reminder of how easy it is for vulnerable young girls to slip through the cracks in Cambodia.  With the right support, it can be almost as easy to keep them on track. Lotus Pedals provides one cheap, effective method for shoring up those cracks.

As a result of our generous donors on GlobalGiving, Lotus Outreach plans to distribute 158 new bicycles to at-risk girls as the school year gets underway in Cambodia.  We look forward to keeping you updated on the many successes of the Lotus Pedals project and thank you again for your support! 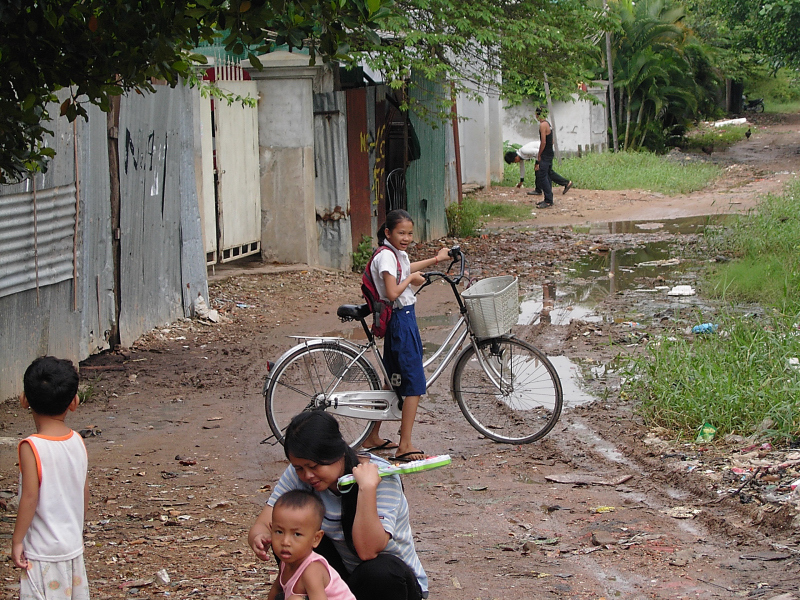 Riding to school in Trolok Baik 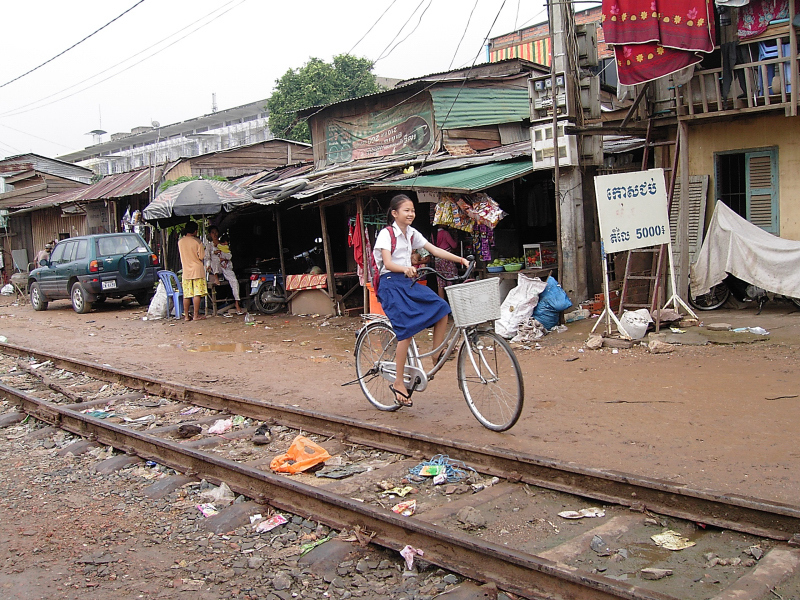 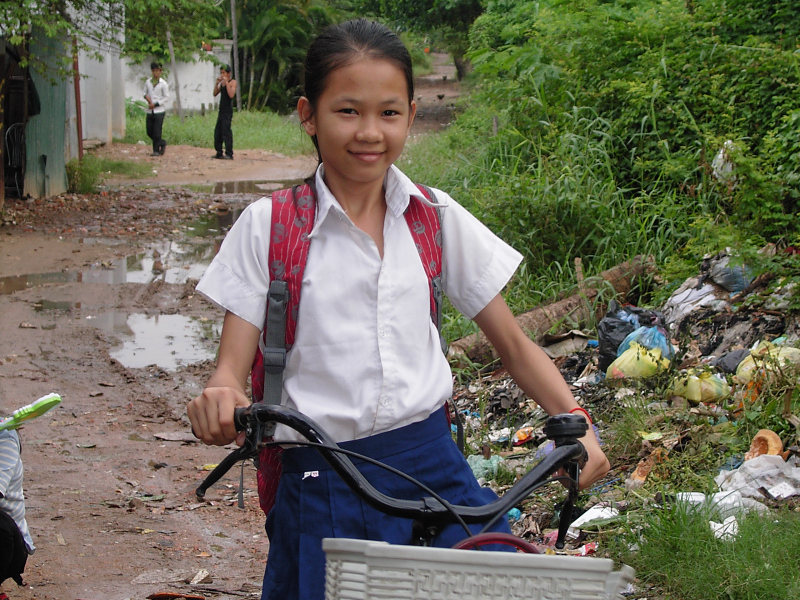 Happy to go to school! 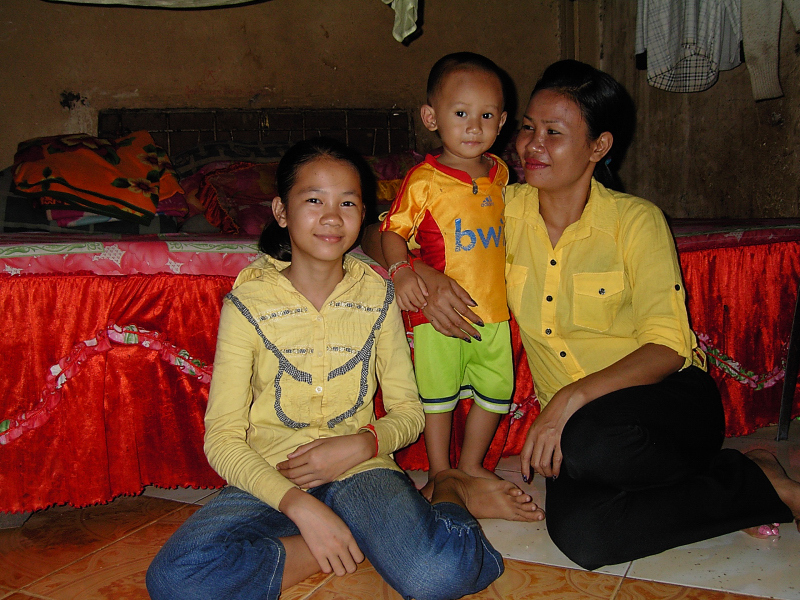 Srey Pov with her mom and brother at their home