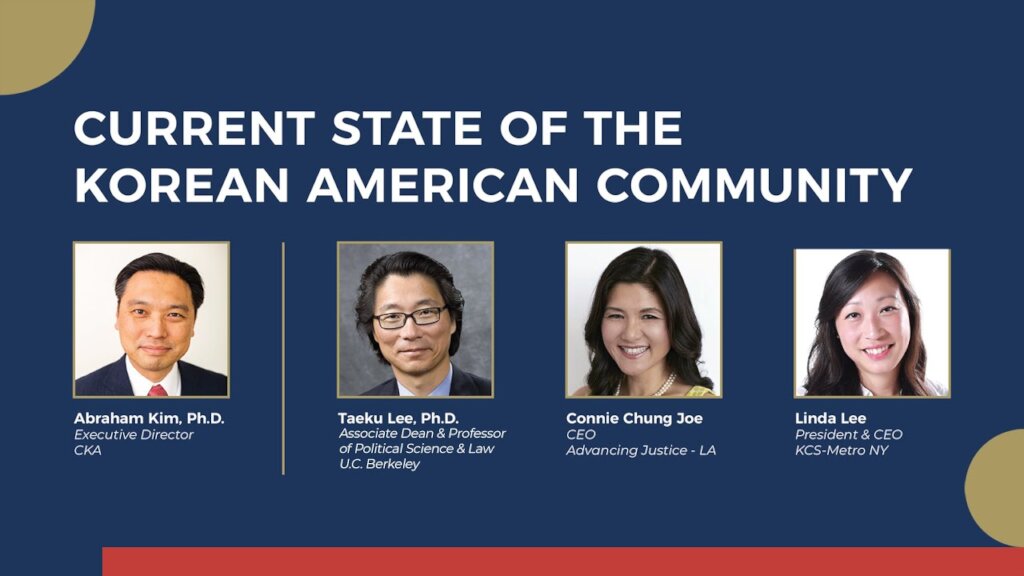 Even as Korean Americans become part of the fastest-growing ethnic group in the United States, we have struggled to make our voice and influence known due to the very limited data and information made available about the Korean American community.

To solve this issue, the Council of Korean Americans has partnered with Professor Taeku Lee, George Johnson Professor of Law & Political Science at U.C. Berkeley, to conduct a national survey collecting demographic data of Korean American’s political, economic, and societal status in the United States.

As a first step, Professor Lee has been gathering the most up-to-date and comprehensive research on the 1.8 million Korean Americans in the U.S. and is compiling them into a single report. This report charts the evolving attitudes among Korean Americans in all aspects: voting patterns, socioeconomic status, social tendencies, relations with other ethnic groups, stances on domestic and foreign issues, and more.

With your continued support and donations to our campaign, we are able to continue to provide this invaluable research to government, nonprofit, think tanks, and academic institutions alike.

On behalf of the Council of Korean Americans, we sincerely thank you again for your generosity as we continue this necessary effort. We hope that you will continue to invest in the future of the Korean American community.

Project Leader:
Abraham Kim
Washington, DC United States
$75 raised of $15,000 goal
You last donated to this project on
2 donations
$14,925 to go
* Amounts in US Dollars
Donate Now
Donate once
Donate monthly
$10
USD
assists with research and analysis of existing data
›
$25
USD
helps develop a data collection report
›
$50
USD
funds a Korean American leadership forum
›
$100
USD
helps ensure Korean American perspectives are a part of policy-making
›
Make a monthly donation & get matched today at 100% while funds remain. Terms and conditions apply.
Give the gift of stability in a time of instability. Set up an automatic, monthly gift now and get matched at 100%—because the COVID-19 pandemic has hurt us all, and it will take all of us to overcome it. Terms and conditions apply.
Monthly giving is as easy, safe, and as inexpensive as a Netflix subscription. Start a monthly donation to Council of Korean Americans today and get matched at 100%. Terms and conditions apply.
$10
USD
monthly
helps develop the national survey
›
$25
USD
monthly
helps policy-makers identify trends in their Korean American communities
›
$50
USD
monthly
assist with the publication of the research findings
›

GlobalGiving
Guarantee
Donate https://www.globalgiving.org/dy/cart/view/gg.html?cmd=addItem&projid=48091&rf=microdata&frequency=ONCE&amount=25
Please Note
WARNING: Javascript is currently disabled or is not available in your browser. GlobalGiving makes extensive use of Javascript and will not function properly with Javascript disabled. Please enable Javascript and refresh this page.