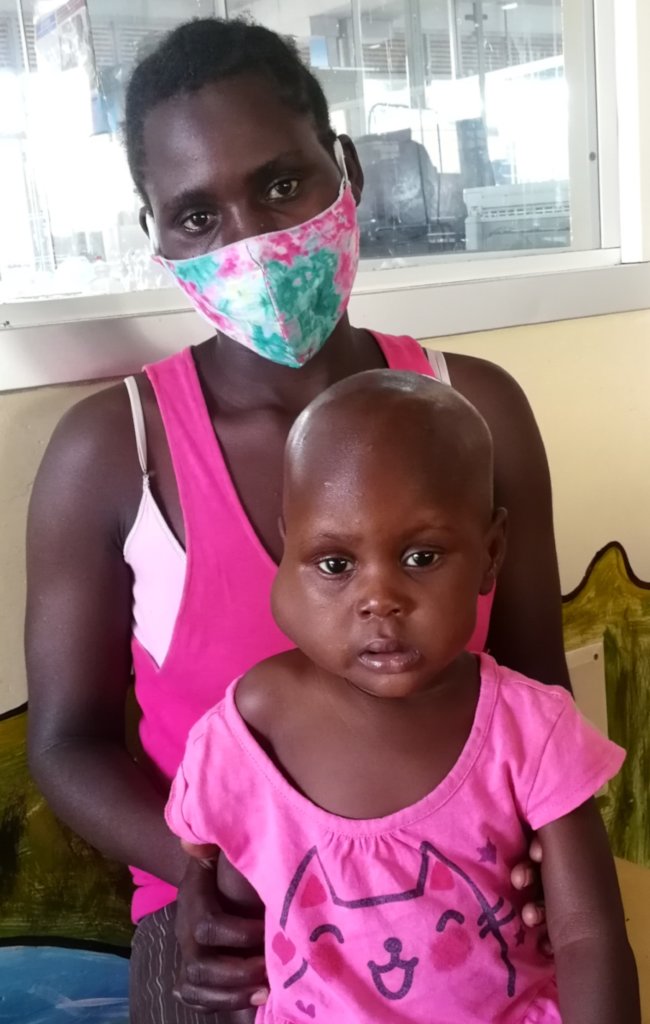 Immaculate and Her Mother

When Immaculate was three months old, she developed a swelling in her right cheek.  Her parents sought care at a local hospital where she was admitted and treated for two weeks without improvement.  She was then referred to another hospital and was hospitalized for a further three weeks.  The doctors at the second hospital suspected that she had cancer and referred Immaculate and her parents to St. Mary’s Hospital, Lacor in Gulu - nearly 380 kilometers from her home. She was admitted to St. Mary's in November 2020. She was accompanied only by her mother.  Her father had provided financial support for them up until this time.

Upon admission, Immaculate was a healthy five-month-old baby who was being breast-fed by her mother - apart from a large solid mass in her right cheek that was painful to the touch.  She underwent routine tests – which were all negative except the ultrasound examination of her cheek that revealed the  cheek mass was infiltrating her right salivary gland.  The biopsy confirmed that she had rhabdomyosarcoma, a type of cancer that can involve tissues such as this in young children. When her mother telephoned the father to inform him that their daughter had cancer, she said that he never spoke a word. After this call, she tried to contact him again, but he had cut off all his telephone services. She tried to telephone Immaculate’s paternal grandfather who stated that his son was not at home whenever she called.

Mother and daughter were alone and without any financial or emotional support from the father. At St. Mary’s, they were given free accommodation and food at the hospital's Family Home and provided  with much needed psychosocial support. Immaculate began treatment for her cancer in December 2020. We anticipate that she will complete all treatment in early January 2022. Her treatment has been delayed at times due to side effects of chemotherapy and the need to excise the cheek mass. She is presently in complete remission and has a residual cyst. Upon treatment completion, we will perform cosmetic surgery to remove excess tissue that is still visible (including in the photograph of her with her mother).

Immaculate and her mother have not left the hospital - even during breaks between treatment cycles.  Her mother wants to ensure that her daughter completes all planned treatment. As a team, we have have watched Immaculate grow and meet normal childhood developmental milestones. She is now able to eat simple table foods, use a potty chair, and able to stand and walk on her own. She can speak a few words and she can interact and play very well with other children. It is hard for us to believe that she will be 18 months old very soon.

After treatment and cosmetic surgery, Immaculate will return to live with her mother’s family which is very far away from St. Mary’s (near the Ugandan border with Kenya). Her mother hopes to start a small business to financially support herself and her daughter. Our team has plans in place to ensure that Immaculate is followed at regular intervals at the hospital and at home to ensure that she remains cancer free.

Immaculate’s mother wishes to thank everyone who has donated to this project because it has meant that her daughter has received free treatment and they have received free accommodation and other services throughout their prolonged stay at St. Mary's.  Thank you for your generous donations that provide the necessary support for children like Immaculate to give them the best chance for cure.

Project Leader:
Melissa Adde
Brussels, Belgium
$23,348 raised of $75,000 goal
You last donated to this project on
192 donations
$51,652 to go
* Amounts in US Dollars
Donate Now
Donate once
Donate monthly
$15
USD
provides round-trip transportation to the hospital for the child and his or her family
›
$25
USD
provides meals and local accommodation for a child and parent during treatment
›
$50
USD
pays for many blood tests and other tests needed during treatment
›
$100
USD
pays for the supplies needed to make an accurate diagnosis of childhood cancer
›
$250
USD
pays for the treatment of one child with cancer
›
$300
USD
pays for the costs associated with training health personnel in the management of children with cancer, including psycho-social care
›
$500
USD
goes towards providing basic necessities such as clothing, hygiene supplies, toys and educational materials, including costs associated with teachers' salaries
›
$1,000
USD
goes towards improving childhood cancer services at the hospital and towards professional and public awareness campaigns
›

Make a monthly donation & get matched today at 100% while funds remain. Terms and conditions apply.
Give the gift of stability in a time of instability. Set up an automatic, monthly gift now and get matched at 100%—because the COVID-19 pandemic has hurt us all, and it will take all of us to overcome it. Terms and conditions apply.
Monthly giving is as easy, safe, and as inexpensive as a Netflix subscription. Start a monthly donation to The International Network for Cancer Treatment and Research (INCTR) today and get matched at 100%. Terms and conditions apply.
$15
USD
monthly
provides round-trip transportation to the hospital for the child and his or her family
›
$25
USD
monthly
provides meals and local accommodation for a child and parent during treatment
›
$50
USD
monthly
pays for many blood tests and other tests needed during treatment
›
$100
USD
monthly
pays for the supplies needed to make an accurate diagnosis of childhood cancer
›
$250
USD
monthly
pays for the treatment of one child with cancer
›
$300
USD
monthly
pays for the costs associated with training health personnel in the management of children with cancer, including psycho-social care
›
$500
USD
monthly
goes towards providing basic necessities such as clothing, hygiene supplies, toys and educational materials, including costs associated with teachers' salaries
›
$1,000
USD
monthly
goes towards improving childhood cancer services at the hospital and towards professional and public awareness campaigns
›