Abraham and His Mother's Plight 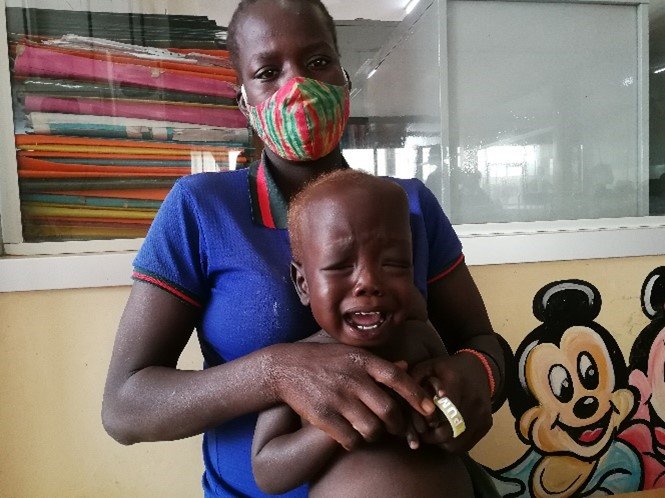 Abraham with His Mother

Abraham was admitted to our hospital, St. Mary’s Hospital Lacor in Gulu, Uganda in December of 2020. He came to our attention during an outreach session that our hospital held in his local community to raise awareness about childhood cancer. Abraham and his mother were immediately brought to St. Mary’s because he was obviously very ill.

At the time of admission, he was only one. His mother reported that Abraham had been ill since he was four months old when she noticed a swelling in his abdomen. The swelling progressed rapidly. His mother further explained that he soon developed multiple swellings on his scalp.  About two weeks prior to admission, he had developed protrusion of both of his eyes with loss of vision and cried excessively. Abraham's parents were unable to seek help when he first developed abdominal swelling because their respective families would or could not help them support the costs of seeking and obtaining medical care.

Because of the clinical findings upon examination, we immediately did a work-up and the tests revealed that he had a large mass above the left kidney.  A biopsy was performed which confirmed our suspected diagnosis – neuroblastoma- a type of childhood cancer. As Abraham’s doctor, it was the first case of this cancer that I had diagnosed at our hospital in a very long time.  Because of our own limited resources for managing children with neuroblastoma, we usually refer these patients to the Uganda Cancer Institute in Kampala.

When we counselled the mother about the need to go to Kampala for her son's treatment, she broke down crying because she had no existing means of support. She said that traveling and staying in Kampala was not an option for her.  She asked us to do anything that we could for her son.  We bit the bullet and started Abraham on an intensive chemotherapy regimen.

We were heartened when he showed a good response to the first cycle of therapy. He has recently completed his third treatment cycle. We faced many challenges in managing the side effects of chemotherapy he has experienced, particularly anemia. Abraham has a rare blood type. The supply for his blood type is normally difficult to obtain, but the situation was made worse because of a general blood supply shortage in our region. But, despite the difficulties, we have been able to manage the treatment-related complications Abraham has experienced so far.

We hope for the best for Abraham and his mother. Family support is an essential part of treatment and we have been able to provide Abraham’s mother with the necessary mental, emotional, and spiritual support during his treatment.  As his doctor, I remain worried about their future because Abraham's overall prognosis is very poor.

Abraham’s story reminds me how necessary it is to inform the public and health care professionals at the community level about the signs and symptoms of childhood cancer so that referrals of children with suspected cancer can be made promptly and prevent children presenting with such advanced cancer as Abraham. It also taught me that families and children with cancer need comprehensive psychosocial support. The support that we have given to Abraham’s mother has enabled her to remain at St. Mary’s so that Abraham can complete planned treatment. It also made me wonder if Abraham’s prognosis would have been better if his parents had the necessary financial support to seek and receive medical help when he first became ill.

We thank everyone who donates to this project because it enables us to deliver the best possible care to unfortunate children who present with very advanced cancer like Abraham. Although Abraham’s long-term prognosis is poor, we have been able to offer his mother the support that she needs and give her son a better quality of life. Thank you again for your generous donations!

Project Leader:
Melissa Adde
Brussels, Belgium
$25,795 raised of $75,000 goal
You last donated to this project on
208 donations
$49,205 to go
* Amounts in US Dollars
Donate Now
Donate once
Donate monthly
$15
USD
provides round-trip transportation to the hospital for the child and his or her family
›
$25
USD
provides meals and local accommodation for a child and parent during treatment
›
$50
USD
pays for many blood tests and other tests needed during treatment
›
$100
USD
pays for the supplies needed to make an accurate diagnosis of childhood cancer
›
$250
USD
pays for the treatment of one child with cancer
›
$300
USD
pays for the costs associated with training health personnel in the management of children with cancer, including psycho-social care
›
$500
USD
goes towards providing basic necessities such as clothing, hygiene supplies, toys and educational materials, including costs associated with teachers' salaries
›
$1,000
USD
goes towards improving childhood cancer services at the hospital and towards professional and public awareness campaigns
›

Make a monthly donation & get matched today at 100% while funds remain. Terms and conditions apply.
Give the gift of stability in a time of instability. Set up an automatic, monthly gift now and get matched at 100%—because the COVID-19 pandemic has hurt us all, and it will take all of us to overcome it. Terms and conditions apply.
Monthly giving is as easy, safe, and as inexpensive as a Netflix subscription. Start a monthly donation to The International Network for Cancer Treatment and Research (INCTR) today and get matched at 100%. Terms and conditions apply.
$15
USD
monthly
provides round-trip transportation to the hospital for the child and his or her family
›
$25
USD
monthly
provides meals and local accommodation for a child and parent during treatment
›
$50
USD
monthly
pays for many blood tests and other tests needed during treatment
›
$100
USD
monthly
pays for the supplies needed to make an accurate diagnosis of childhood cancer
›
$250
USD
monthly
pays for the treatment of one child with cancer
›
$300
USD
monthly
pays for the costs associated with training health personnel in the management of children with cancer, including psycho-social care
›
$500
USD
monthly
goes towards providing basic necessities such as clothing, hygiene supplies, toys and educational materials, including costs associated with teachers' salaries
›
$1,000
USD
monthly
goes towards improving childhood cancer services at the hospital and towards professional and public awareness campaigns
›