In 1998, Nepal Youth foundation (NYF) started piloting Nutrition Rehabilitation Home (NRH) initiative in Kathmandu.  The successful learning encouraged NYF to expand this program to other regional and zonal hospitals.  So far NYF has established 9 NRHs that has been able to support 6724 malnourished children to regain normal health and 5969 parents (caretakers) have been provided with intensive counseling and hands-on training on nutrition, family health and personal hygiene.  NYF has been successfully supporting the Nutritional Rehabilitation Homes (NRH) at nine regional and zonal hospitals outside Kathmandu.

-         The NRHs are located in10 districts of the country.  The total capacity of 10 NRHs is 123 beds.  With an average of 35 children staying days and a ninety percent occupancy target, these NRHs have a capacity to serve 1154 malnourished children per year.

-         NRH Nepalgunj, NRH Biratnagar and NRH-Bhadrapur were taken over by the respective zonal hospitals in June 2009 & 2010.  The government of Nepal, Ministry of Health provided the budget for these NRHs and they are functioning smoothly.  Now NYF is managing 7 NRHs with 86 beds capacity

-         During the nine month period the overall construction work of NRH building in Janakpur was completed.  The inauguration of the building was held in 29th December 2010 and it has started operation.

-         At the same time they have visited Rajbiraj to observe the progress in construction activities of the new NRH building.

-         The construction of NRH-Rajbiraj on the premises of Sagarmatha Zonal Hospital is going on and it will be completed by the end of April.

-         The process of finalizing the agreement with Dhaulagiri Zonal Hospital, Baglung is already completed and it will be signed in January 2011.

-         During this period Program Director of NYOF visited NRH-Pokhara and provides some instruction to the staffs for the better functioning of the facility.

-         Training sessions were organized at NRH-Kathmandu for the staff of NRH-Janakpur.  The objective of the training was to show the overall management of establishment of satellite NRH and its smooth operation and to strengthen the confidence of the newly appointed staff for the conduction of the project.

-         Ministry of Health, Department of Health Services has declared that every last week of December will be considered as nutrition week.  The government agencies for health services, NGOs and INGOs involving in nutritional activities have been celebrating this occasion by conducting different nutritional events in their respective fields.  All NRHs celebrated it in coordination with the District Public Health Offices demonstrating locally available nutritious food-stuffs and providing education on nutrition.

-         NRH-Kathmandu conducted an outreach Nutrition Awareness Camp in Dukuchhap Village Development Committee of Lalitpur district on October 29th 2010 to cover the children from Danuwar ethnic group. Including NRH team, 7 volunteers from project's abroad were involved in the camp to help the team.  Enrollment of children was very impressive, 332 children attended in the camp and anthropometric measurement were taken.  All the mothers participated in the nutrition education session delivered by the dietitian. The health workers tried to educate the mothers through songs to make the education more impressive.

Admissions, discharges and follow-ups are the regular procedures of all NRHs.  At the time of admission and discharge, anthropometric measurement and photographs of all the children are taken.

During July to December, the following activities were carried out by the seven NRHs.

-         A total of 491 children were provided with nutritional care and 424 caretakers were educated on nutrition.  Among the admitted children 84% belonged to age-group under 5 years.

-         Among the discharged children, 377 were officially discharged, 59 discharged before time due to the Dashain and Tihar festival, 31 referred to hospital, because they were having more complications and needed to be re-hospitalized.

-         During the reported period, 870 follow-ups were recorded from 7 NRHs in which 353 were the first, 291 and 226 were the second and third follow-up, respectively.  During follow-up period, most of the children’s health conditions were found to be satisfactory.  Few children were still malnourished due to poor economic condition while a few were having chronic diseases as well.

-         During this period 4 death cases were recorded from NRH Kathmandu and Surkhet.  It was recorded in the follow-up process.  It was due to other diseases.

-         Counseling services were provided by different NRHs to the guardians whose children are mildly malnourished, and these guardians are not able to stay for the recommended treatment.  They receive counseling services by the staff of NRH.  The nursing staff and manager counsel the guardian especially mothers to feed the appropriate balanced diet to recover the weight that the child has lost.  This activity seemed effective.  After attending in the counseling session, maximum number of guardians reported a good improvement observed in their children.

Akha Pun a 21 month old boy was referred from a private pediatric hospital - IFCH (International Friendship Children's Hospital) on September 8, 2010 in a severe stage of PEM (Protein Energy Malnutrition).   He got admitted in IFCH for few days and stabilized there.  The causes of admission in the IFCH were vomiting, loose stool, skin infection, fever and lose of weight.

Akha belongs to a middle class family and his parents are well educated.  He was the second child of his parents.  Even having a good surrounding such as economically and socially, Akha's health condition was deteriorating day by day and he had to visit Kathmandu for the treatment.

The main occupation of the family was agriculture though his father was abroad for the livelihood.   His mother Rima is responsible for looking after both of the children.   Akha used to get 2 meals and 3 snacks a day which is enough for a little boy like Akha but the ingredients were not properly mixed while preparing the food.

At arrival, he weighted at 6.5 kg and height was 71 cm and as per WHO guideline he was severely malnourished (<-3 standard deviations).  He looked very sad and pale.  The rehabilitation program was started with formula 75 and he passed through the entire treatment course.  He received Vitamin A single dose, folic acid regularly.  He started to consume 975 kilo calorie per day and finally able to consume 1545 kilo calorie per day.   Mother Rima had the opportunity to participate in the nutrition education session offered by the NRH.  She understood the importance of good nutrition for a child's growth and development.

After 34 days at the NRH, Akha had reached his desired weight and was no longer malnourished.   During his stay at NRH, his weight was dramatically increased and he reached 8 kg at the date of discharge (October 12), which was a 1.5 kg weight gain in 34 days.   His mother, who was caring him in the Centre, also gained 3.7 kg of her weight.   Akha seemed very happy and healthy at the time of discharge.

We thank you for supporting this worthwhile project. 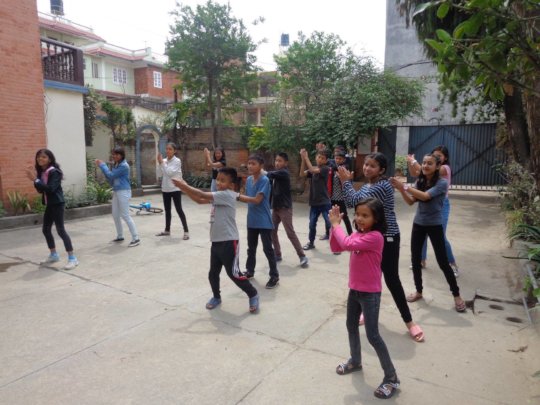